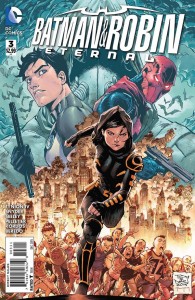 Another fine chapter in the Batman & Robin Eternal run this week. As is the case (normally) with a weekly series, we pick up immediately following last week’s cliffhanger where Red Hood had Cassandra Cain held up in a bar. The two fight it out, but are put in a timeout by Dick Grayson, Red Robin, Spoiler and an injured Harper Row. Where do the good guys always go in a time of crisis? The Batcave, of course! Discussions take place there while one of Dick’s allies from his title (I’m not familiar) enters the action to throw in a few answers, raising a little suspicion on the Batman’s actions. We then get a good flashback (for the third issue in a row), following Robin’s freakout years ago that he wasn’t good enough to be the Dark Knight’s sidekick. When asked what he saw when doused with Scarecrow’s gas, Batman said “nothing”. All events lead to a big gathering for Bruce Wayne (remember, he doesn’t remember anything about being Batman), where the chef leads him to the kitchen where it looks like he’s the main course.

Another solid effort this week for Eternal. Though it definitely included less action than the first two issues, the pacing never slowed down. I enjoy the dynamic between the three former Robins and how they’re getting along. I’m not even minding Harper Row’s involvement, and I’m not a big fan of hers. My knowledge of Cassandra Cain is sketchy at best, but her being mute doesn’t bother me. My only complaint is that I haven’t kept up on Dick Grayson’s story following his “death” in Forever Evil, so I appreciate the little editor’s note at the bottom of certain pages. Still, I’d rather not have to do further reading just to understand a new character. As for the art, Pelletier returns for another week and the results are solid. I’ve said many times before, DC knows how to find good artists for their Eternal runs and so far it’s 3 for 3.

Overall, a good issue that moves the story forward and looks great while doing it.