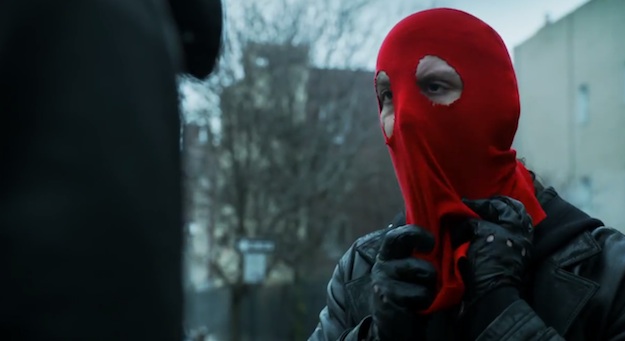 Another week, another episode of Gotham.  If you’ve been a frequent watcher, then you know what to expect and this week won’t surprise or disappoint you.

This week, Gotham continues its habit of juggling multiple storylines (some good, some bad) while leaving some out of the picture. An unexpected guest stays at Wayne Manor for a few nights, Penguin has liquor problems, Barbara shows up for who knows what reason and the GCPD is chasing after “The Red Hood Gang.” Oh yeah, Fish Mooney also loses an eye (TOTALLY UNNECESSARY!).

If you’ve been checking in with Dark Knight News, you know we have been covering Gotham pretty heavily since it was first announced. Once the show debuted, we’ve been posting weekly reviews, hoping the show would get progressively better and that I would see a difference between episode 17 and episode 4. Unfortunately, there isn’t much of one. Gotham continues to not know what it is, mixing good with campy and anything in between.  In “Red Hood”, we get a lot of great, small moments… surrounded by inconsistency. A “friend” from the past shows up at Wayne Manor and is greeted by Alfred. Then, Barbara brings her terrible acting to her apartment (how’s she paying for it again?) which has been taken over by two girls. Throw a little bit of a new gang in there (which switches leaders every other scene) and that is supposed to deliver an hour of entertainment.

Robin Lord Taylor’s “Penguin” character, by far the show’s brightest spot, has been getting less screen time the past few weeks. Why? He’s making the minutes count, even though he’s not necessarily being given anything good to go with. Also, Fish Mooney is involved in possibly the worst scene of the series thus far (yes, even topping Barbara) and I can’t find any point to it.