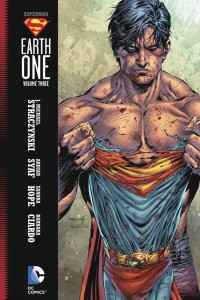 The latest volume in the series that launched the “Earth One” line of books is now available in stores everywhere and it’s a real dandy. Just as with the previous two, it contains just the right amounts of familiarity and reinterpretation. Actually, this is the volume that most establishes this continuity’s unique identity. I’ll somewhat tread spoiler territory in this review as I see no way around discussing certain aspects of the story.

Writing duties are still splendidly handled by the legendary J. Michael Straczynski. What needs to be addressed is the change of artists: Shane Davis is out and Ardian Syaf is in. Although Davis created some beautiful images in the first two volumes, this change isn’t necessarily a bad thing. Syaf has made quite the name for himself in the past five years at DC and many a reader should enjoy his robust renderings of the young Man of Steel. I first took notice of Syaf when he contributed to a few issues of Superman/ Batman around a half decade ago and knew big things were on the horizon for him. If Davis is no longer able to be a part of this series, I can say with confidence that Syaf is more than capable of carrying the torch.

The story itself focuses on Clark Kent continuing to adjust to the world, juggling superheroics with his job at the Daily Planet. There’s a subplot that runs throughout featuring his new love interest, Lisa (introduced in the previous volume), who also learns his secret. Martha Kent keeps him grounded with motherly words of wisdom and the government continues to be wary of Superman, employing the Luthors to take him down (more on them later).

The main villain of the piece is Zod, or should I say, Zod-El. That’s right – he and Supes are related in this universe! His backstory and interaction with Jor-El aren’t entirely unfamiliar; just amalgamate what you know about Zod with a dash or Zor-El. I had some internal debate about discussing a major aspect of the character and how he factors into the plot and I’m deciding to stay mum about it. I’ll just say this: fans of Smallville will see certain similarities with that show’s version of Zod and his history on Krypton. That hint alone may make you realize what I’m referring to.

Zod-El shows up posing as a hero and is about as duplicitous as it gets. He’s more than just a general here – he is more of a politician than we’ve seen in previous interpretations, plotting with world leaders against Superman. He’s threatening, ruthless and his costume is wonderfully alien. Despite an aesthetic makeover, I still hear the voice of the great Terence Stamp when I read for him. There’s also a climactic battle between the two Kryptonians with surprising involvement from the Luthors that is truly memorable.

Ah yes, the Luthors. Lex Squared are kind of the backbone of this book. Lex Luthor himself is more reluctant to take down Superman despite concocting a way to do so with red sun radiation. His conscience is ever present and some fans may not agree with how he is used, though I commend the writer for going in an unexpected direction. It all leads up to a radical new spin on Superman’s greatest nemesis.

There are other welcome surprises such as a new standard of relationship with Lois Lane (Superman signal!) and a can’t miss speech on the floor of the U.N. near the end of the book. Despite reinterpretations, I firmly state that this book is TRUE SUPERMAN. It’s boldly different, but sticks to the foundation of the character and his motivations. The final page should bring a smile to your face. Though this series is ongoing, this volume tied together threads from the previous two and really made it feel like a trilogy. Yes, we still have seeds planted for where a fourth volume could go and I can’t wait to see where that will lead us and the Man of Tomorrow. Score: 9/10