Konami’s old school Batman Returns DOS game from 1992 is now available for you to play…in your web browser.  Indeed, times have changed, and as each day passes, technological advancements progress further, leaving previous advancements in the dust, or building upon them, expanding them towards new frontiers.

DOS refers to a “Disk Operating System,” a type of operating system that dominated PC markets between 1981 and 1995.

Konami’s DOS Batman Returns is not identical or entirely similar to the Sega, SNES (Super Nintendo Entertainment System), NES, or Sega Game Gear versions of the game, and rather than primarily playing like a beat-’em-up, it is more like an adventure game.

Here’s how MobyGames described it:

Frigid winter winds swept over an already chilled Gotham City. Random street crimes were running at an all-time high, despite the holidays. Down below, in the city’s frozen sewers, Oswald Cobblepot, known as The Penguin, planned more mayhem and schemed the take over of the frightened metropolis. His loyal army of missile-packing Penguin Commandos and the bizarre Red Triangle Circus Gang are energized by the evil genius of the web-footed orphan. A desperate call to Batman goes up.

Batman Returns is an adventure game with fighting sequences, based on the movie of the same name. Control Batman’s combat style, and help conduct relentless interrogations of The Penguins many allies. Use the Batcave computer to input clues, analyze evidence, and review enemy bios. You’re in charge of weapons, too. Stock Batman’s Utility belt with enough heat to match the diverse fighting styles of The Penguin and cold-blooded, sewer-dwelling minions.

If you desire to partake in nostalgia, or if you’re curious about an old-school game, then click here to experience DOS Batman-gaming from 1992 (then click “Run”); unfortunately, the Internet Archive has mislabeled the DOS game as the SEGA game (an issue we hope is fixed soon), so please remember that you’re about to play the Konami-published DOS game. 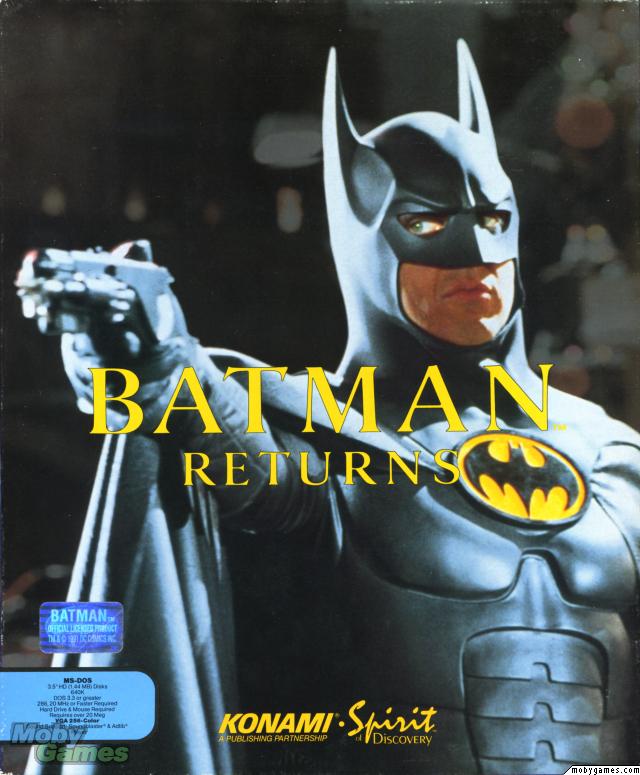