‘Gotham’: Prenatal Robin, but No Harley Quinn this Season

Executive Producer Bruno Heller has revealed that Gotham fans can expect a “prenatal Robin” to appear on the Fox crime drama series, but Harley Quinn will not make an appearance during the first season.

“We’re going to do a prenatal origin story for Robin down the line…There’s an episode coming up where we learn how Robin’s parents got together.”

Clearly, the fact that Robin is still developing (or will soon develop) in the womb makes sense, particularly because Bruce Wayne, Selina Kyle, and Pamela Isley are most likely too young to visit the theater to watch R-rated films (or perhaps PG-13 rated films) without a guardian’s supervision.  After all, Robin is supposed to be younger than Batman, right? 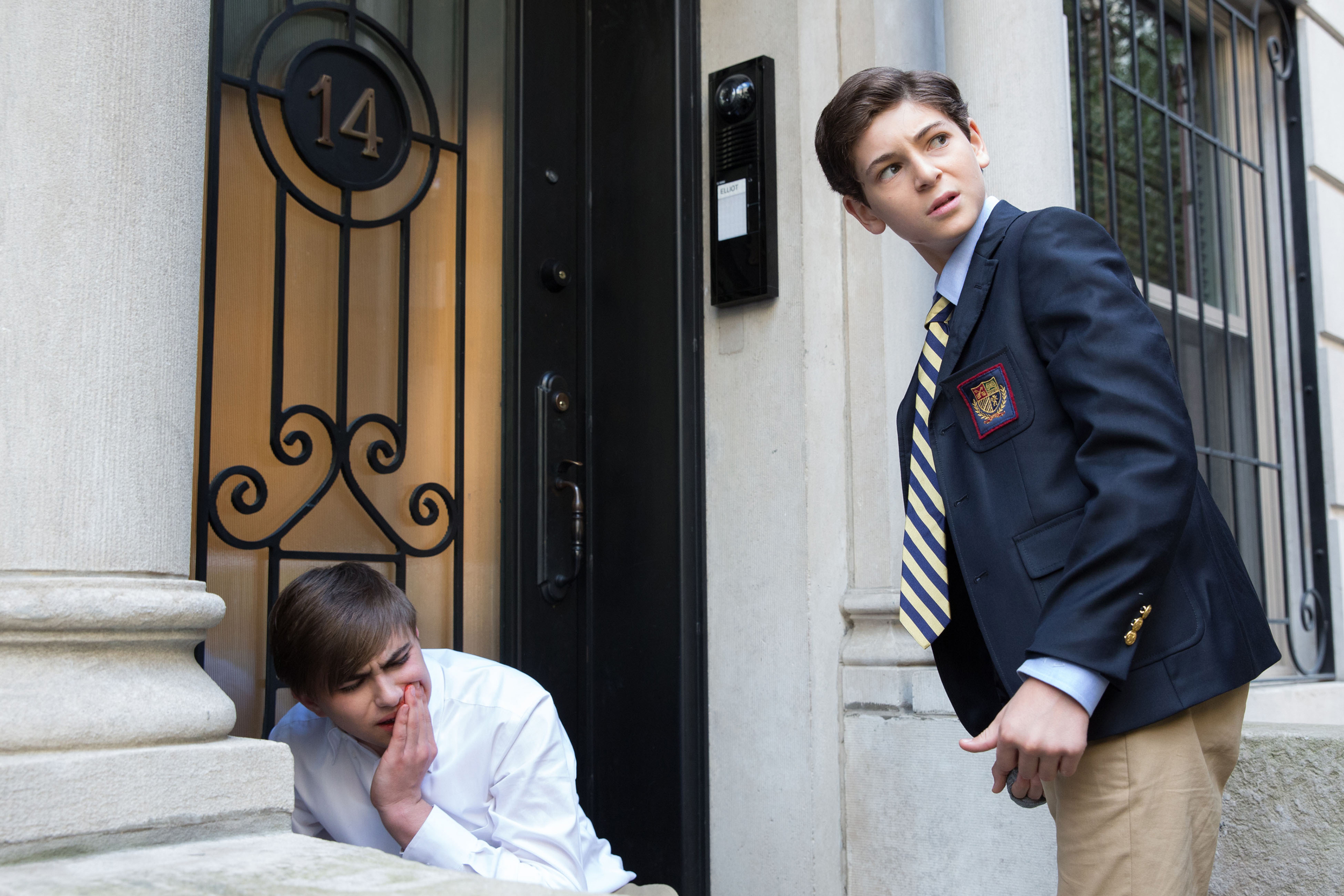 Since Gotham focuses on the origins of the city, its villains, Gordon, and the like, then we might expect to hear something about Scarecrow soon, but not before we relish in watching little Bruce administer a well deserved beat-down on an insolent fool…

Here’s what Heller had to say about Scarecrow, who might pop up somewhere in Gotham this season:

“This is not a kid being a loony Scarecrow; this is a couple episodes about how that character has evolved — everyone’s character is formed in their childhood to some degree or another.  His father is involved, as is part of the mythology.”

Reasonably, Harley Quinn won’t appear this season, and that’s not a bad thing.  Gotham seems like a show that deals with a big pool of characters, many of whom are developing slowly in re-tellings of origins stories; to digress, one might say that such re-telling is not inherently blasphemous, since Batman, as both a character and a franchise, has been developing, evolving, and changing for decades.  Nevertheless, you can comfortably expect that they’ll get around to revealing Harley at some point. 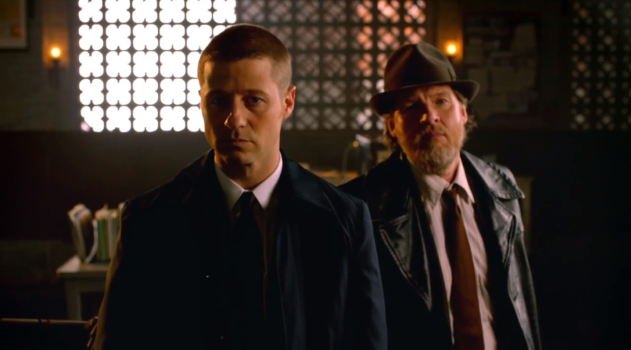 Here’s what Heller had to say:

“One of the things about the size and scope and ambitious of this production is that — it’s not that there’s lots of chefs in the kitchen, but there’s a lot of people with opinions and views and inside knowledge.  That aspect of the show — which characters to use and when — is a source of constant discussion, and that may well have been an issue that came up, and was dropped.  We haven’t got Harley Quinn in it.   Riddler’s girlfriend is coming up, and Harley Quinn is definitely planned for later on, but so far no.”

The bombardment of fans with as many villains and characters as possible, per episode, would be a great disservice to the Batman franchise, and so far, Gotham has done a reasonable and calculated job of systematically introducing characters, inch by inch, while emphasizing particular characters more than others — such as the unnervingly sociopathic, yet bright and lovable Penguin, and the iron-willed, tough-but-fair Gordon. 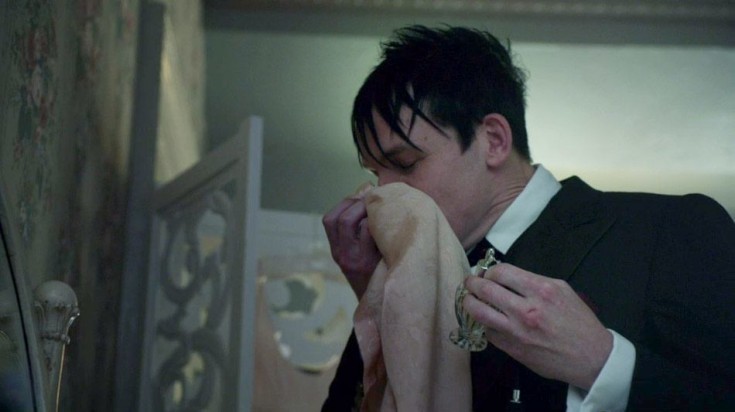 Heller spoke on this issue:

“You can’t just keep pumping these characters into the show in a comic book sort of way, because you get the Super Friends effect — which isn’t a bad effect, but then you have spaceships, and need to go underwater and get wacky villains and the rest of it.  You have to work as a character piece first. First it has to be real.

Once we introduced those initial characters — Penguin, Riddler, Ivy, Selina, [Harvey Dent] — then we’ve slowed down with those aspects and we’re bringing in those iconic DC characters in a much more measured way, which was always the intention.  You have to have that amount of spice in the show to make it pop and different.  Once the wheels are turning, it’s much easier to bring those characters in in subtle, organic ways. That’s the plan, anyway.”

We’ve been getting little speck-like glimpses of the Riddler in action, and little by little, we’re beginning to understand what makes him tick.  He’s a man driven by the thirst for and pursuit of knowledge, the development of intellect, and perhaps even recognition of his efforts and prowess by his coworkers and colleagues.  …subtle in the sense that we’ve seen a handful of episodes merely peppered with his presence, but his character is slowly and certainly shaping up.  Considering this, we may rest assured that the likes of Harley and the Joker will be implemented appropriately. 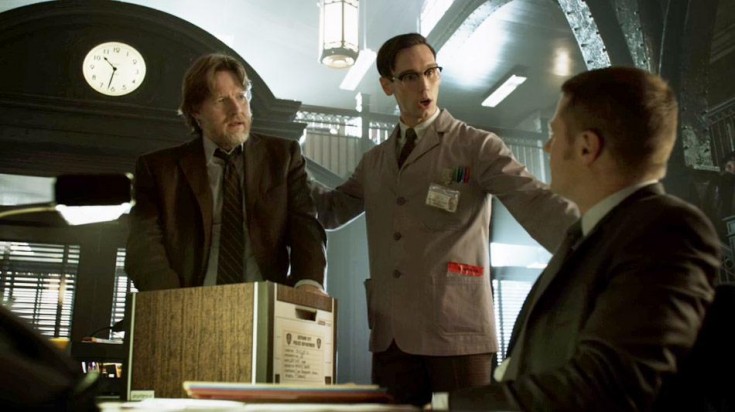 Stay tuned in with Gotham on FOX, Mondays at 8/7c, and check out a few full episodes here or here.

Wrapping up Filming in Chicago