Things have been pretty rough for our favorite heroes a few universes over. Today, I’m going to catch you up on what has happened in the past few issues of the weekly series Earth 2: World’s End, including the fourth issue that shipped this week. I’ll discuss the finer points of each issue and score them individually before closing with my thoughts on what’s transpired and what’s to come. 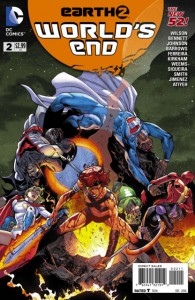 #2: After a strong debut issue that focused on flashbacks and setup, we slowly start to turn the gears with this chapter and inch toward an all out war with Apokolips. In fact, the first of the Furies to show up to torment the heroes is actually War. Wilson and company do a great job of writing for this ensemble of characters, which are drawn by a variety of artists (more on that later). Hellish threats pop up around the globe and the heroes spread out to try to deal with the carnage as best they can. The main focus continues to be placed on Batman/ Thomas Wayne, Superman/ Val-Zod, Huntress, Powergirl, and Red Tornado (whom I will refer to as the “core group”), with Green Lantern heading to South America and Hawkgirl and Dr. Fate protecting London. This issue closes with the most horrible news: Apokolips will collide with Earth in 24 days! Score: 7.5/10 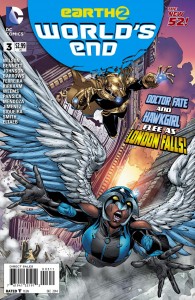 #3: This issue picks up right where the last one left off, with the core group divided and battling each other. War managed to corrupt the females of the group and they try their best to decimate the male ones physically and verbally. Luckily, Red Tornado comes to just in time; it really does help when you can reboot your mind! We do get some minor appearances from Dick and Barabara Grayson as well as Earth 0’s John Constantine who has been transplanted here (apparently this will be further explored in future issues). Elsewhere, Commander Khan tries to come up with some sort of survival plan. Before concluding, the core group decides to head into a fire pit in order to take the fight to the Apokoliptian forces, while delegating the responsibility of protecting the surface to Green Lantern. We leave off with Aquawoman finding Atlantis to be corrupted. Score: 8.5/10 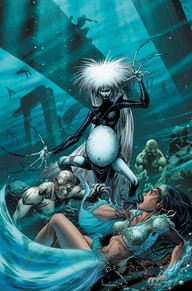 #4: The final issue that we shall examine today sees a major development as Apokoliptians Mr. Miracle, Big Barda, and Fury join forces with Earth’s World Army, giving them inside knowledge as to how to invade their home planet. Continuing with the cliffhanger presented in the previous issue, we see that Death has decimated Atlantis and has turned much of their living into an army of the dead. Aquawoman makes a desperate decision; whatever it was and the full weight of it remain to be seen. Although the situation with Death is the subject of the cover art, it actually doesn’t comprise much of the interior content. Still, I had to mention it as it will no doubt have huge ramifications in the future. Two major villains also return in this chapter: Grundy and Desaad. The latter greets the core group when they finally descend into the fire pit. I’m sure that no Earth 2 fan will be able to resist coming back for the fifth issue with these transpirings. Score: 8/10

Much like its big brother, World’s End continues the superheroes in the trenches vibe that made the Earth 2 monthly so enjoyable for the past year or so. It will be quite interesting to follow the core group as they descend into hell and how this Earth will (assumedly) deal with its final days. Darkseid himself will eventually show up in this title and his presence virtually guarantees a read from me wherever he may appear. The only real detractor here isn’t much of a detractor at all, but needs to be mentioned: the many artists. Instead of seeing one artist handle an issue a piece, several work on each. Granted we see greats such as Eddy Barrows and Tyler Kirkham lend their pencils to these pages, but sometimes the transitions can be a bit jarring. Regardless of that, World’s End continues to deliver and does a great job of separating itself in tone from the other weeklies DC is currently publishing.