Synopsis: From the superstar creative team that brought you a new start to the Caped Crusader comes the story that could end him. Be there in October for the biggest, deadliest and most epic story yet from writer Scott Snyder and artist Greg Capullo – “Batman: Endgame” begins here! 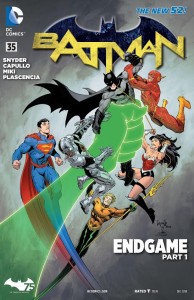 ***Note: if you wanted to buy this issue because Cyborg is on the cover, save your money…he doesn’t show up.***

So begins post “Zero Year” in Scott Snyder and Greg Capullo’s Batman run. I have to admit, that was a great epic, and going into “Endgame” I was clueless. Why is Batman fighting the Justice League? Is this going for a bit of the fantastical and Science Fiction-ish side of The Dark Knight?

Let’s catch up. Issue #35 picks up after the events of Batman: Eternal, and Bruce Wayne has a new bat bunker in Gotham City… which used to be a hideout for the Court of Owls. Bruce is still trying to fight off a fear toxin (Eternal?), and is receiving assistance from not one Pennyworth, but two. 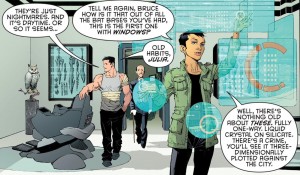 It seems all is well, there’s even laughter, until the cranky Princess of Themyscira ruins the party… 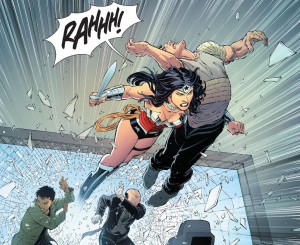 A fight ensues, and Batman is soon taking on Flash, Aquaman and the Man of Steel himself. 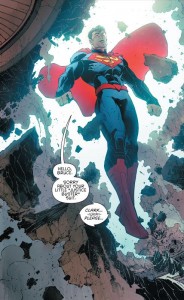 This issue was a surprise. I didn’t know what “Endgame” was going to be all about, and the cover wasn’t reassuring to me. It did include the members of the Justice League, which I’m not exactly fond of all invading Batman’s flagship title and attempting to take it over. But Snyder makes it work, and Capullo’s take on each character is awesome. The day he’s not on Batman will be a sad day indeed. The twist at the end  of this issue, though, put a big smile on my face. Almost bigger than Superman’s. 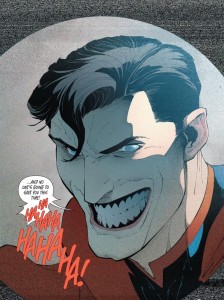 The back-up story, written by James Tynion IV and illustrated by Kelley Jones (YES!), is a nice introduction into what I’m sure will be a haunting tale.

All in all, “Part 1” of this new arc is off to a chilling start… and will surely put a smile on that face.