Are you ready for another big announcement concerning DC Comics for this October? The latest one comes to us via Comic Vine: starting with Earth 2 #27, Tom Taylor will split writing duties with the up and coming Marguerite Bennett. As for art, Nicola Scott is out and Andy Smith is in. With Taylor writing Injustice comic book tie-ins and working with a pool of writers on the upcoming weekly Earth 2: Worlds End, he probably won’t mind a little assistance penning this title. Here’s what he had to say about the upcoming changes:

I’ve just spent the weekend with my good friend, Nicola Scott, and her husband, at a convention in Melbourne, Australia, and we’ve had some fun late nights to reflect on a great run that we’ve both enjoyed so much.

The overwhelmingly positive reaction to Earth 2 #25 is something that neither one of us can really remember on any single issue of comics we’ve been involved in before. We seriously couldn’t be happier to tell this story, and to bring it to a natural, climactic, end with #26. It feels like our run, together, is ending on a real high.

It’s hard to describe just how great an opportunity it is to create characters like Aquawoman, and especially our new Superman, Val-Zod, and to have these characters welcomed and embraced by comic readers everywhere. Getting to do this with my friend, Nicola Scott, with the great support of our editor, Mike Cotton, has been a dream.

I want to say a huge thank you to Nicola for everything she’s brought to Earth 2 and for everything she leaves behind. Nic has spent years helping to shape an entire world and its heroes. It’s now time for her to go play on other worlds and create all new icons (although she plans on spending an entire Tuesday on a couch first).

As World’s End begins, I’m rapt to be working closely on the monthly book with another friend and great talent, Marguerite Bennett. And everything I’ve seen of Andy Smith’s work tells me that Nicola is leaving our world in great hands. 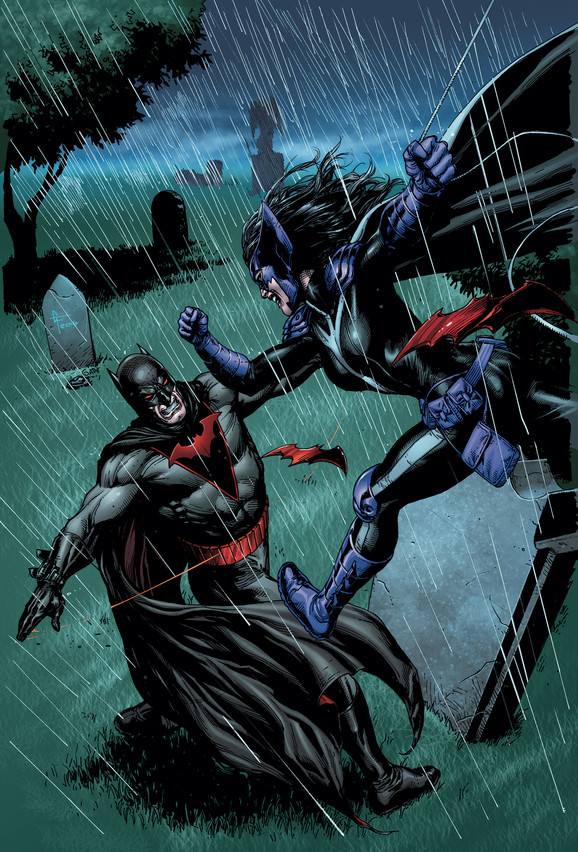 World’s End is here! Everything the Wonders of Earth 2 have fought for stands to be destroyed. Be here as their powers are tested and hard choices are made!