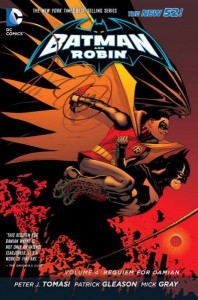 The Batman and Robin ongoing title has seen many guests share the headlining spot with Batman over the past year and that actually started in the stories collected into this trade. This is when I started referring to it as “The Title Formerly Known As Batman and Robin”. Though, much like Prince, it returns to its original name this July. But let’s not get ahead of ourselves.

The death of Damian Wayne – the most recent Robin – is what shook up the status quo of this book in the first place. The only issue collected here to actually be titled “Batman and Robin” was #18. The rest feature co-headliners Red Robin, Red Hood, Batgirl, Catwoman, and Nightwing. A Batman spiraling out of control after his son’s murder is explored in these pages and, believe me, this may be the most unhinged Batman you have seen this side of Frank Miller. We’re supposed to see him go through the five stages of grief, but most just feel like anger.

As I touched on a moment ago, the opening chapter is Batman and Robin #18, which was the widely praised “silent issue”. If you are unfamiliar, it featured no dialogue and followed Batman going on a tear through Gotham while acclimating to not having his son by his side. This was definitely one of the most emotional comics of 2013 and how they conveyed such feeling without the use of dialogue is highly commendable. Pat Gleason’s noir-ish images would make Tim Sale blush.

When we start to get to the meat of the story with the Red Robin chapter, we find Batman beginning to embark on an insane quest to resurrect Damian. In fact, Red Robin is barely involved and more focus is placed on Frankenstein. What happens with Frankie seemed a bit out of character for Batman, but you will have to make your own judgment. This chapter also sees The New 52 introduction of the much hyped Carrie Kelley. She’s not a pre-teen like in Frank Miller’s The Dark Knight Returns, but rather a film student that had a friendship with Damian, unbeknownst to Bruce. She has been seemingly forgotten since this arc, but it’s possible we will see her eventually because Peter Tomasi keeps touting his run as an “uber-story”. I hope she does come back because scenes involving her were among the most enjoyable in this particular volume. 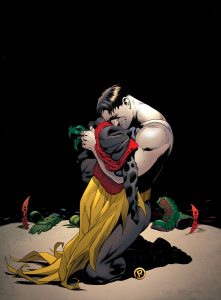 To touch a little bit on other characters included, Red Hood’s chapter didn’t offer too many memorable moments, but his argument and subsequent fight with Batman were highlights. In short, wouldn’t you be a bit irked if someone brought you to the place you died and wouldn’t let the subject go? Oh yeah, Batman went there. As for Batgirl, who recently killed her murderous brother by accident, seems to have it more together than Bruce and tries to talk some sense into him. I believe this was the “bargaining” phase of the story, but most of the bargaining actually came from Batgirl, oddly enough. As I said earlier, Batman mostly comes off as angry throughout. I was unable to pin down a favorite chapter, but the Catwoman one is one of the best. I was hoping for something a little deeper, given their complicated relationship, yet was satisfied for the most part. The team-up with Selina was probably the most fun to be had among what were mostly some very dark and serious co-ops.

The final chapter (featuring Nightwing) is also among the best and sees Bruce run a simulation over 400 times to see if he could have prevented Damian’s death. It was only fitting that the original Robin was the one to bring him to the stage of acceptance. One of the most heartbreaking scenes occurs at the end when Bruce finds out that Alfred blames himself for Damian’s death and is taking the loss just as hard. It’s not like I’m spoiling a major plot point, but this is a scene that you can’t miss.

To be quite honest, Batman and Robin has been quite the parabolic read when it comes to quality in The New 52. If you have yet to collect this series in trade format, I recommend that you buy Vol. 1: Born to Kill, skip Vol. 2: Pearl, buy Vol. 3: Death of the Family, and buy this one that I just reviewed. It probably is one of the better Batman and Robin collections from The New 52 era. I am looking forward to reading and hopefully reviewing the next in the series. Score: 8/10