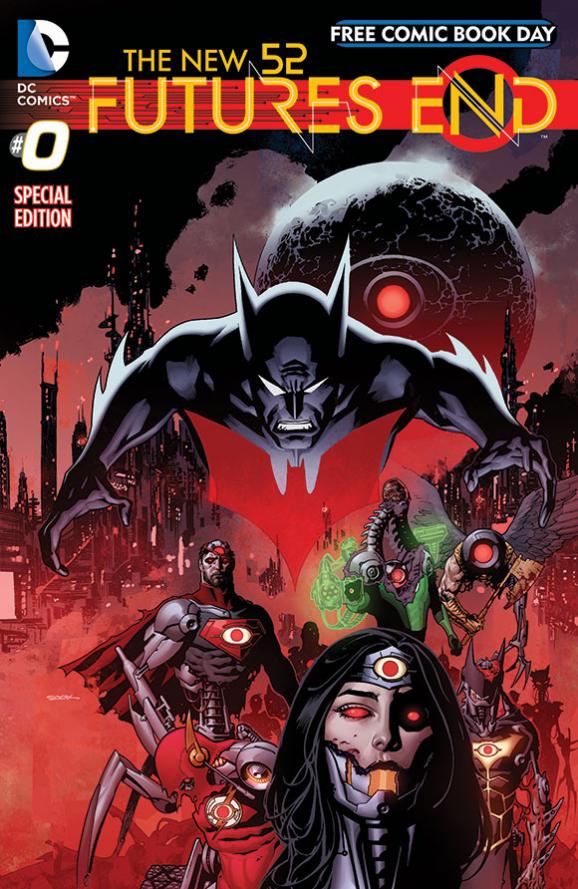 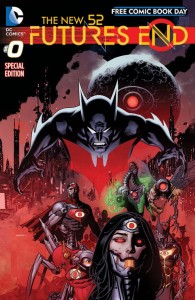 I’m going to warn you right now: this is one of those reviews in which I can’t discuss the material without giving a fair amount of spoilers. Now that we have that out of the way, let’s proceed. Futures End is the second weekly comic from DC to launch this year and, much like Batman Eternal, it makes a stellar debut. Technically, this is a prelude issue that is available in participating comic shops today in celebration of Free Comic Book Day. (Issue #1 is available May 7.)

We begin 35 years in the future and Brother Eye has taken over the planet, which you have probably already surmised from viewing the cover art. Heroes have been turned into robotic bugs – it’s like a cybernetic version of Rotworld! Believe me, nobody is immune. Superman, Wonder Woman, various other members of the Justice League and Justice League Dark, and even members of Batman Incorporated are among the converts. Flash and Green Lantern John Stewart mount some valiant last stands that are exactly that – last stands.

You’re likely curious as to what Terry McGinnis’ involvement is, so I’ll discuss that next. He and Bruce Wayne are seemingly the last remaining heroes when we join them in the cave. Their relationship isn’t entirely like the one seen on the Batman Beyond animated series because Bruce is sporting a cool, futuristic Batsuit. I hope we one day find out more about this Terry’s background and why there are two Batmen. The two Dark Knights have devised a plan to travel 35 years into the past to undo the events that lead to this terrible future. However, a major problem is encountered when Terry arrives five years later than intended, therefore the events are already in motion. You will have to pick up Futures End #1 this Wednesday to find out what happens next.

All in all, this roundtable of writers turned in a rather remarkable prelude that may be one of the best FCBD books from DC of the past decade. It doesn’t hurt that great artists like Ethan Van Sciver, Dan Jurgens, and others contributed to this issue as well. With the big September tie-in event looming and Earth 2: World’s End on the horizon (which I feel will crossover with this), Futures End will no doubt have major ramifications on the DC Universe as a whole. With this being a free read, you have no excuse not to pick it up. Score: 9/10 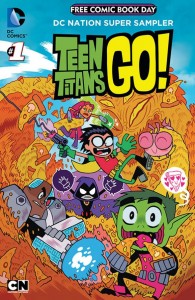 This one really wasn’t my cup of tea. It captures the tone of the TV show very well, but it’s a TV show that I can’t stand. I wish Cartoon Network would go back to having dramatic superhero cartoons that are appropriate for all ages, but that’s a discussion for another day.

This issue is divided into two stories. The first sees Robin attempting to solve the mystery of who ate Cyborg’s sandwich, which leads to the team fighting a pizza demon. Yeah. The second follows them having a whimsical outing at a mini-golf course that actually does have some great DC Easter Eggs. This may be appreciated more by fans of the show or younger readers, but it just didn’t do it for me. Score: 5/10