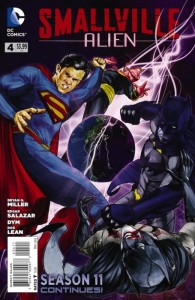 I guess the first thing I should point out is that, despite the character’s color scheme, that’s not Black Adam on the cover. (Provided by Cat Staggs, my current favorite cover artist in the industry.) It’s actually the Monitor that’s been the antagonistic focus for this mini-series. Speaking of the Monitor, I wasn’t totally satisfied by his send-off. It was a bit underwhelming, to say the least. Despite this being a highly entertaining arc, the conclusion left me desiring a bit more; answers, for one thing.

Now we’ll discuss what Batman was up to in this issue. He engages his Earth 2 counterpart in brutal fisticuffs. It seems Earth 2 Bruce has taken a page out of Owlman from proper DC canon’s book and killed his parents, is likely responsible for putting his Barbara Gordon in a wheelchair, and may actually be his respective Earth’s Joker. (Visions of The Batman’s “The Laughing Bat” episode dance in my head.) It remains unclear if he is actually Smallville’s interpretation of the Joker, if you get what I’m saying. I know Superman is the focus here, but I find it exciting to explore what’s different about Batman’s corner of the Smallville universe.

Although this isn’t the strongest issue, I still think you should pick this up if you’ve been following Season 11. A lot of important stuff happens and sets up the Crisis to come. (Yeah. THAT Crisis.) We get some really cool Easter Eggs. The first of which is getting to see Martian Manhunter throw Earth 2 Bruce into a cell with Curtis Knox/ Vandal Savage that was only hinted at on the TV series. We also get the first Smallville appearance of Dick Grayson, albeit a one panel cameo. Wonder Woman returns and Batman joins the Justice League! Next month begins a new mini-series in the form of Smallville: Lantern, which won’t be covered here unless Batman shows up. That doesn’t give you an excuse to not give it a buy. Score: 7.5/10