At recent convention appearance, John Dimaggio slightly hinted at the possibility of playing the Joker again.

Mark Hamill will always be my Joker. As I said on a past DKN podcast, I love Mark Hamill, t(hough in the Animated Series, he didn’t quite get to put his acting chops to the test) he more than made up for it in his spine-tingling performances in Mask of Phantasm, Batman Beyond: Return of the Joker, and the first two Arkham games. Aside from Troy Baker’s insipid imitation of Hamill, I can appreciate different takes on the Clown Prince of Crime. I am particularly partial to John Dimaggio’s go in Batman: Under the Red Hood. His performance was downright menacing, intimidating, psychotic and overall different from Hamill’s and I loved it. 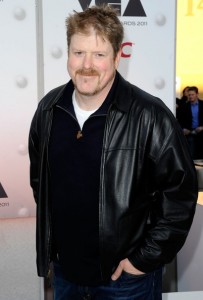 Dimaggio recently attended a convention down here in Miami, entitled Animate Miami, where he hosted a packed Q&A panel. There, a fan shuffled over to the microphone and praised his turn as the Joker and inquired about if he were to be asked to return, would he? Showing much gratitude, Dimaggio said, “If I were asked, in a heartbeat.” He then hesitated slightly and mentioned very briefly that something could be coming. When the fans reacted, Dimaggio quickly pulled back, announcing that he wasn’t at liberty to speak on it anymore and the subject was dropped. There was a certain knowing grin on his face, though.

When I pressed him later at his booth, he quickly and jovially refused to comment any further, repeatedly declaring that he wasn’t allowed to say anything on the matter, likely due to a strict nondisclosure agreement. Considering the recently revealed trailer to Son of Batman and the source material from which it is based off (Grant Morrison and Andy Kubert’s Batman and Son), do you think it’s a possibility that this is the project about which Dimaggio must remain hush-hush?

Take that for what you will, folks. But it looks to me – mind you, I’m no authority on this – that Dimaggio is pretty excited about possibly coming back as the Joker and accidentally let it slip due to his unchecked enthusiasm for the role. For the time being, as it remains unconfirmed and kept closely under wraps, I’m going to file this in the rumor category and say to keep the salt in close proximity.

What do you think? Are you excited for Dimiaggio’s return? Or do you think it’s time for him to pass the torch onto a new voice actor? Let me know.