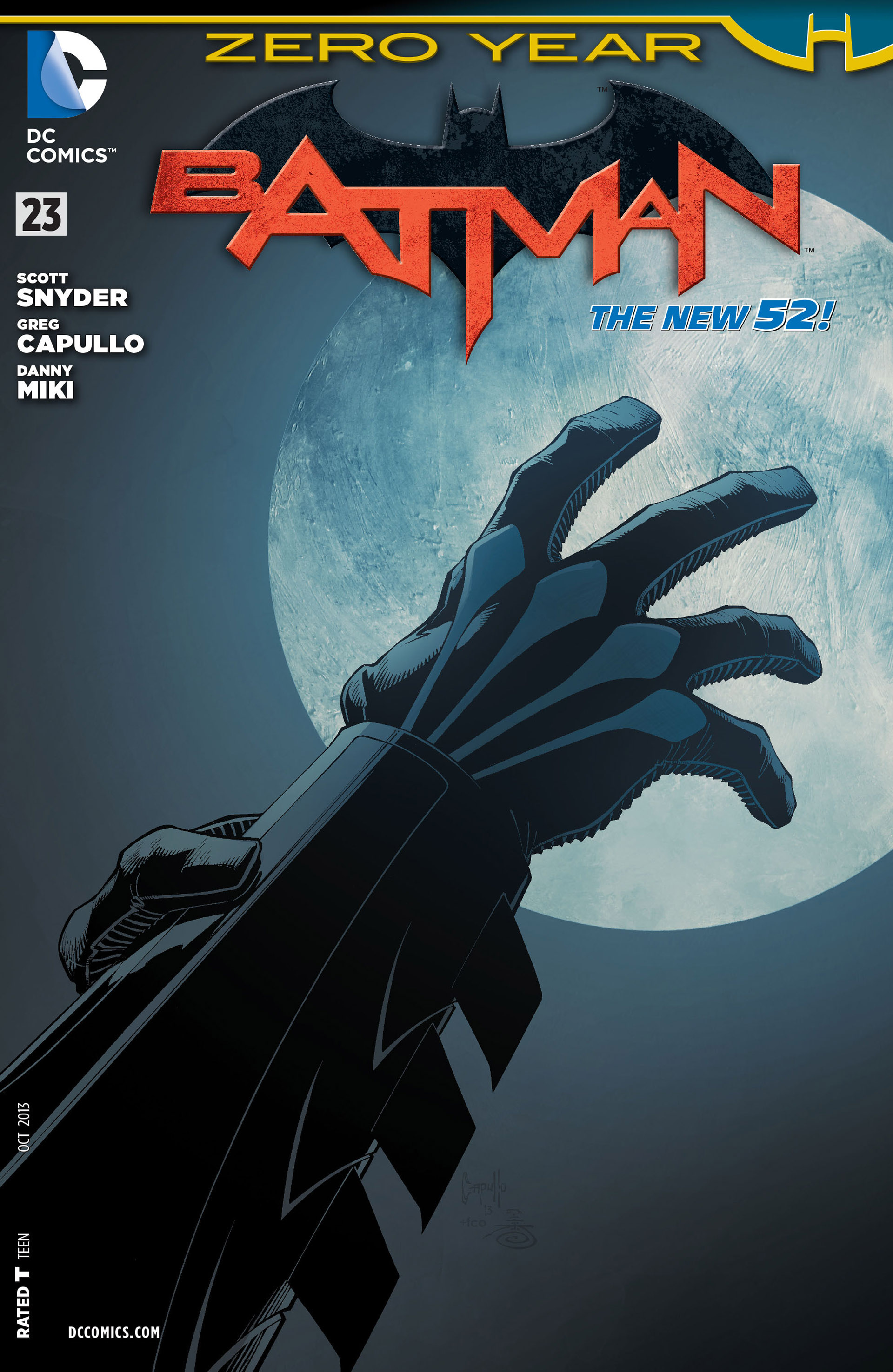 Batman #23 continues Bruce’s journey into “The Cowl” in a retelling for The New 52, which finds him at the mercy of a force so strong that it will require drastic measures.

Secret City: Part Three picks up mere seconds from issue #22’s explosive cliff hanger, which finds Bruce the victim of The Red Hood Gang’s murder attempt.  As life slowly drifts away from him, Bruce’s instinct is to will his way back home to find death in the remnants of his family’s home.  There he is awoken by salvation at the hands of the ever loving Alfred.  While still in a fragile state, Bruce wonders through Wayne Manor, and in moment of despair stumbles upon the very thing that will make Bruce Wayne seize to exist.

“Here’s to Symmetry.”  Once again it is Greg Capullo’s art that is the star of this issue, as the tale that is told with the visuals is one that a written medium cannot easily tell.  The panel layout in the first third of the book shows two different parts of the same night by displaying the same sense of despair and fight for survival within both moments.  Equally important is FCO Plascencia’s amazing coloring, which creates a stark contrast between the events by using vibrant colors during the action, while accenting Wayne Manor’s haunting solitude with muted grays.  Capullo and Plascencia’s combined efforts create truly beautiful symbolism, the kind that begs to be experienced.

“Now, once in a while, someone will come along and bang their head against the futility of it, and that’s always exciting.”  When it was first announced, many felt that Zero Year was not necessary.  While the past issues have been great, Batman #23’s familiar beats had the potential to derail that momentum.  However, Scott Snyder proves that he can take convention and still make it both fresh, and his own.  His approach to the key moment of the bat in the study is wonderfully imaginative, with the use of the of the 3-D camera/projector.  A moment that has the potential to be as uniquely remembered Frank Miller’s pearls dropping, while still managing to remain true to and pay homage to both Miller’s and Finger’s interpretations.  Snyder’s dialogue also really defines this issue as Nygma is written as a cocky, boastful, and clever individual with a tone that’s both witty and effortless.  Similarly the exchange between Bruce and Red Hood One continues the brilliant tease of their potential future relationship.

“They’re scared of him, ma’am.”  Batman #23’s back-up story by James Tynion IV and Rafael Albuquerque  is one that is as strong as the rest of the issue.  A tale about Batman’s defining conviction that illustrates the lengths he will go to to avoid taking a life, The Pit is the perfect way to cap off an amazing issue.

The Mediocre and The Bad

“Where are you?”  While nothing in life can truly be perfect, I can, without hesitation, say that there is nothing wrong whatsoever with this issue.

Batman #23  is the reason why I read comics.  While part of a larger story, this issue is a seminal piece of that grand picture, and a perfect example of what the comic medium can accomplish.  Snyder is a beast and his work with Batman continuously gets better.  Writing this strong would be the highlight of any other book, but Capullo’s work shines through enough to challenge it for thate top spot.  Regardless of what strength you prefer in your books, Batman # 23 has everything you could ask for.  If you aren’t already picking this series up, run out now and join the many Bat-fans as issue #24 will bring the “Birth of a Legend” and, as Snyder has promised, purple gloves.