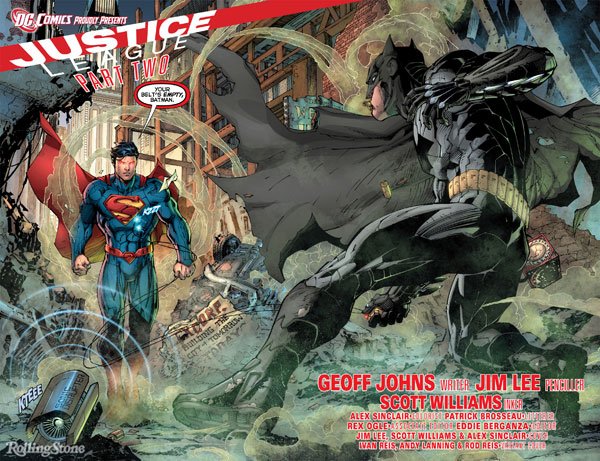 At SDCC, it was confirmed that Justice League: War would be the next direct-to-DVD DC animated feature. Now, the cast and some details have been confirmed. Click the jump to see more.

I somehow missed it, but apparently, after the cover to Justice League: The Flashpoint Paradox was released, it was revealed that their next feature would be tentatively titled Justice League: War. Looks like I’ve been slacking, because like the rest of the world, I found out when it was announced at San Diego Comic-Con a few days back. It will be our next feature for DC’s direct-to-DVD market, scheduled for early 2014.

Well, along with that announcement, we’ve got some cast information and a synopsis.

I have no idea who Jason O’Mara is, but I know that the team behind the DC animated flicks wouldn’t do Batman wrong. He’s been too good to them. But I do know Alan Tudyk and though I loved his turn as Steve the Pirate in Dodgeball, I didn’t like his Ed Wynn impression as King Candy in Wreck-It Ralph. As far as I’ve seen, he’s a comedic actor, so we may be getting a somewhat goofy Supes. But as they wouldn’t do Bats wrong, they wouldn’t do Supes wrong either. The others have a had a lot of success in TV, but unfortunately I’m not the biggest TV fan nowadays, so I can’t vouch for them either.

In a universe where Super Heroes are strange and new, Batman has discovered a dark evil that requires him to unite the World Greatest Heroes! Superman, Batman, Wonder Woman, Green Lantern, Aquaman, The Flash and Cyborg unite for the first time to form the Justice League!

The flick will be directed by Jay Oliva, who was responsible for The Dark Knight Returns and the upcoming Justice League: Flashpoint Paradox, and Heath Corson will be scripting an adaptation of Justice League: Origin, originally written by Geoff Johns with art by Jim Lee and Scott Williams.

After Flashpoint Paradox, it looks like we’re getting tons of New 52 and Geoff Johns-written stuff. Personally, I’m a fan of his work, so I’m okay with it.

What do you think? Any names on the cast list that catch your eye? Are you happy with the approach that the DC direct-to-DVD animated division is going?