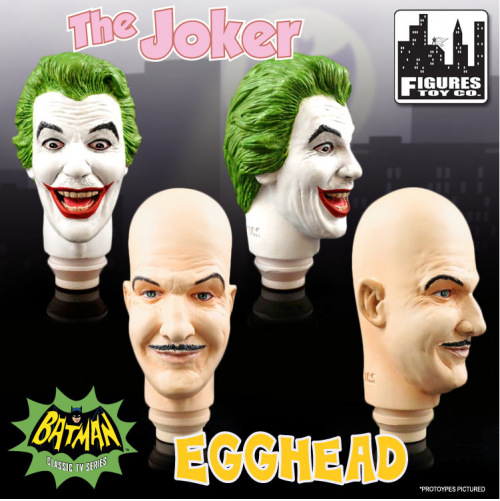 More Retro 8″ Batman Classics 1966 figures to be released by Figures Toy Company. You get to see the packaging and some of the accessories that come out with these new figures. Click the jump to see more.

Figures Toy Company has already jumped on the train to release  Batman 1966 Classic TV Series Sets of their own Retro 8″ figures of Adam West as Batman and Burt Ward as Robin. Here is what the CFO, Anthony Balasco has to say about these figures:

“It has been my understanding that the collectors community would enjoy collecting retro 8 inch and 12 inch action figures based on the “Batman 1966 Classic TV Series.  When we saw that the rights were settled between the involved party’s we immediately became interested in acquiring the license”. We are proud to say that the collectors will be able to enjoy a vast selection of characters that have never been available before.  Our head sculpts will look life like and the cloth costumes will be highly detailed.”

So, here is the rundown of what’s coming out first. Series 1 will include Batman, Robin, The Riddler & The Joker.  Future series will include The Penguin, Catwoman, Dick Grayson, Bruce Wayne, Egghead, King Tut, Mr. Freeze, Shame, Bookworm, Mad Hatter, Batman (with removable cowl), Robin (with removable mask), The Joker in prison baseball outfit, The Joker in opera outfit, & The Joker in grey suit.  All Batman 1966 Classic TV Series figures will be available in both 8 inch & 12 inch starting early Fall 2013. All of the Batman 1966 Classic TV Series are exclusively sculpted by “The Farrow” Danny Anniello.

The sculptures on figures are ridiculously accurate just from the images of them. It even has the mustache on Joker. Sweet! See more of the series packaging, removable accessories and more down below.