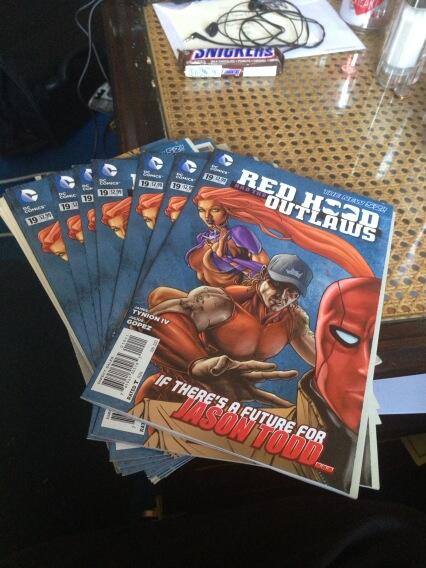 For all Red Hood fans, who have been waiting for the new arrival of James Tynion IV and Mico Suayan to take the Outlaws by storm. Eh, there’s a new art change. Click the jump to see more.

Scott Lobdell (former writer) is off of Red Hood & the Outlaws since Issue #18 along with Timothy Green II as artist. We all welcomed Scott Snyder’s protege, James Tynion IV as writer and new artist Mico Suayan who has done awesome art covers for Marvel and Smallville. We were all excited to see Suayan bring realistic grit to the pages of Red Hood which called for it. However in January, Suayan revealed that he will no longer be on Red Hood & the Outlaws as artist, see below:

This Redhood gig has become a really tough gig for me. The pressure of time and making this a memorable issue is overwhelming.

Clearly, Suayan as an artist is someone who likes to dedicate his time to details in his art. We understand that. DC Comics has been nothing more than assembly line for creative writers and artists. Some of whom can’t work in this fast paced popping out issues of DC Comics.  It’s fair to say that the stories from DC Comics has been questionable and at times uneventful. Suayan got fans all excited about Red Hood’s burned off face with this cover art for Red Hood & the Outlaws #19. However, since Suayan is off the book we won’t be able to see it on the cover. See the image below of Suayan’s Issue #19 cover art and Blond’s (colorist for Red Hood) color work:

So, who’s next on the list as artist of this book? Well, James Tynion IV tweeted the arrival of Red Hood & the Outlaws #19 at his home featuring the new cover art and the new artist of the book. It’s Julius Gopez. Gopez is the penciler from Team 7 where  his work shines with action sequences constantly throughout the pages. Gopez understands comedic timing, action sequences, and will be able to deliver monthly issues. Although, the artwork will not be fantastic at least Red Hood fans can expect a steady artist and writer for the next few months. See the new cover art below for  Red Hood & the Outlaws #19 below.

REDHOOD AND THE OUTLAWS #9: WHO ARE YOU? HOO, HOO. REVIEW