If you are a Riddler fan and you have a girlfriend who is also a Riddler fan. The both of you do not have to share a Project Triforce Riddler Trophy together. You can get one for yourself and one for her as well. Just like in Batman: Arkham City where the Riddler left riddles for Catwoman to solve and electrocuted Batman if he helped her. Well now, you can treat your girlfriend to the Catwoman Pink Riddler Trophy!

It is 19″ inches and weighs about eight pounds. It has it’s own LED effects and it lights up pink in dark instead of the usual green color. It costs about $400, so your girlfriend better be worth the dime it costs for this pretty in pink, or should I say “Evil in Pink.” Muahahaha!

It is on pre-order right now, so that is a $100 down payment. Plus, it is going to be at the San Diego Comic Con this year. If you are going you can check out the awesome trophy and drag your girlfriend along with you for this awesome trophy.

Comment below or on DKN Facebook about if you would dish out the dough to get this for girlfriend? Or maybe you like to buy this for your niece, female cousin, sister, or one of your female best friends because this is a trophy that will make a great expensive present to whoever you buy it for. 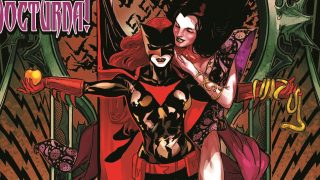