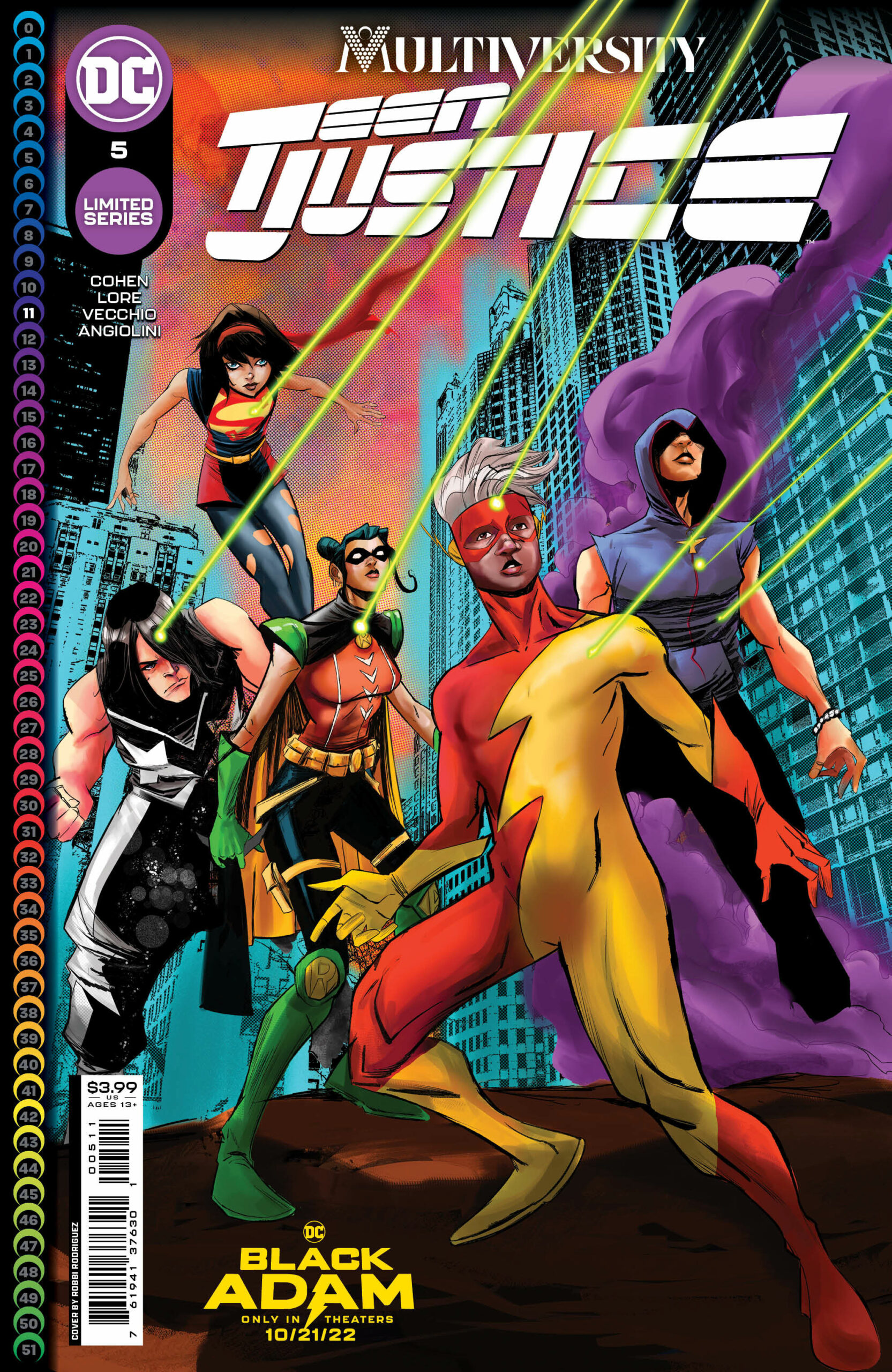 Multiversity: Teen Justice #5 begins with the background character, Gigi, stumbling into the midst of the Green Lantern Core. She seems to be popping up an awful lot in this series, so I wonder if she’s going to end up having a central role in the story rather than just being the minor character she seemed to be at first.

When she interrupts the Core, they’re talking about needing an “empty-headed kid with no one to miss them when they’re gone” to become their “Darkstar”. That name should be familiar to Titans or Green Lantern readers, as the Darkstars were a galactic police force that used to be rivals to the Green Lantern Corps. Donna Troy served as a Darkstar for a while. 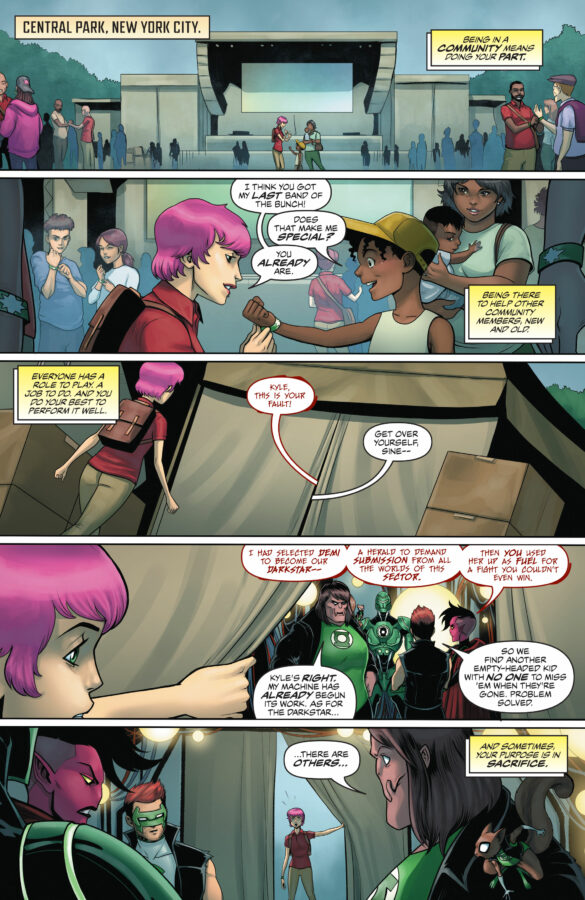 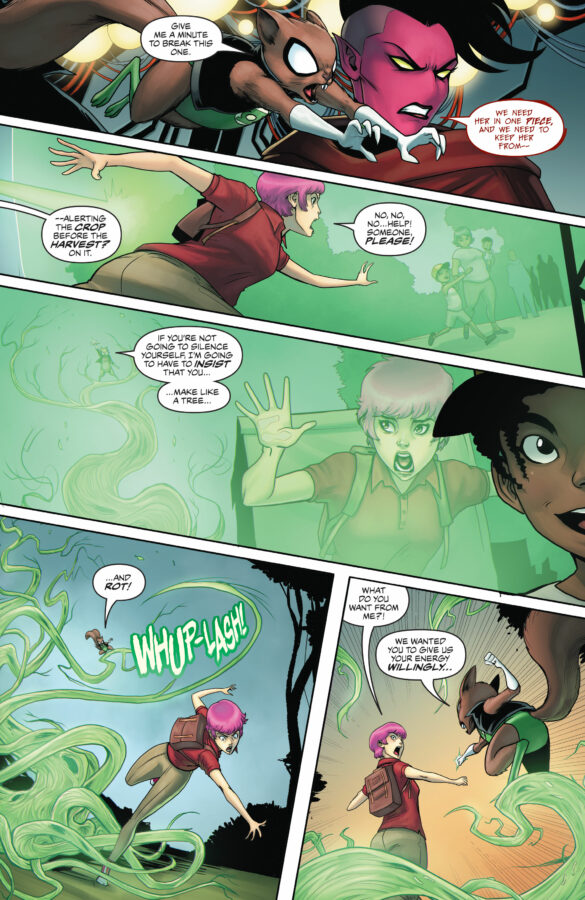 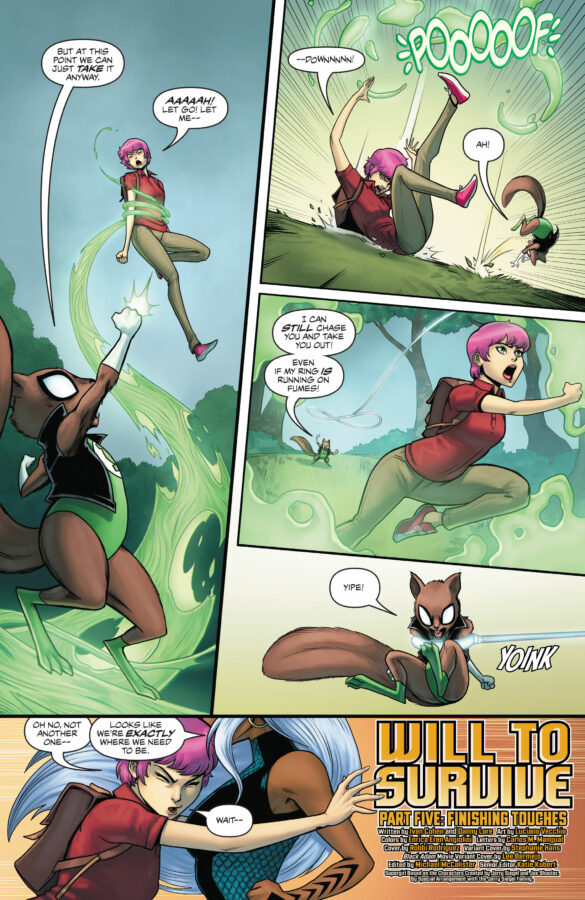 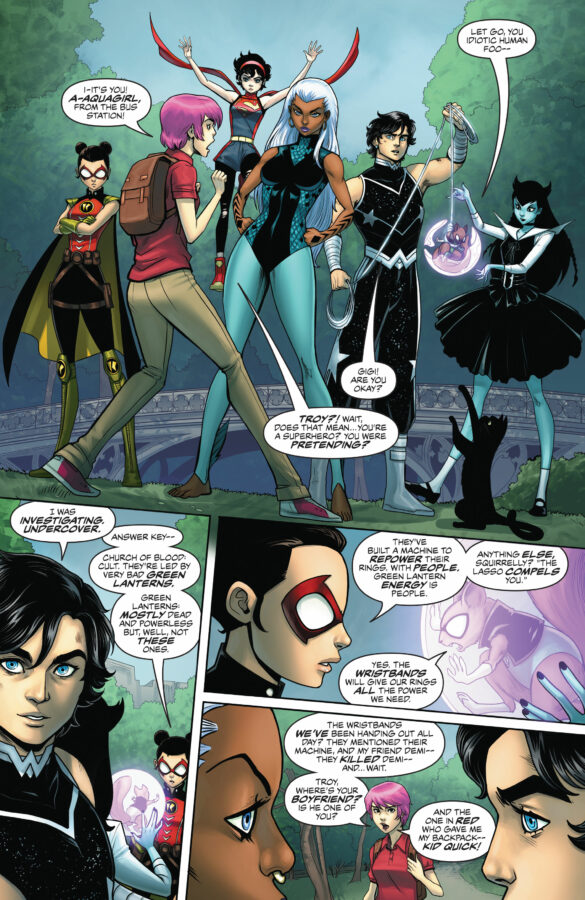 However, it seems that the Darkstar that the Core is looking to create would be their puppet, and Gigi fits the bill. Fortunately, Teen Justice arrives to save her from the villains. Well, most of them, as Kid Quick and Raven aren’t present. Instead, they’re at the Quick Museum. Kid Quick is having an identity crisis and is unsure if they want to continue as Kid Quick.

I’m fascinated with all the hints about Earth-11’s alternate history and the Quick Museum is chock full of intriguing bits of it. For example, Jess refers to her great-aunt, the original Jesse Quick, as having won four gold medals. From the hints, it seems that Jess’ great-aunt is actually the female counterpart to Jesse Owens, the Black athlete that enraged Hitler with his gold medal wins in the 1936 Berlin Olympics.

There are also references to Maxine Mercury and Professor Quick, a.k.a. Jayne Garrick. There’s also a reference to a speedster from the future called XL, and even a parallel Earth speedster called the Flash. Cohen and Lore are doing a brilliant job of world-building, giving us a sense that Earth-11 has a long, rich history that’s begging to be explored. I would love to see this world’s history in future stories, or perhaps we could get a Who’s Who type sourcebook.

Kid Quick, with the prompting of Raven, finds inspiration in the exhibits of the museum… not just to carry on as Kid Quick, but also the inspiration for a new costume. Like Gigi, Quick seems to be playing a central role in this series. There have been hints in recent months that the character will be moving from Earth-11 to the main DCU Earth. The most notable example would be their appearances in the Future State event as the future Flash, wearing a costume that’s almost identical to the one Jess dons in this issue. Perhaps this series is intended to lead up to Jess’ relocation to Earth-0. 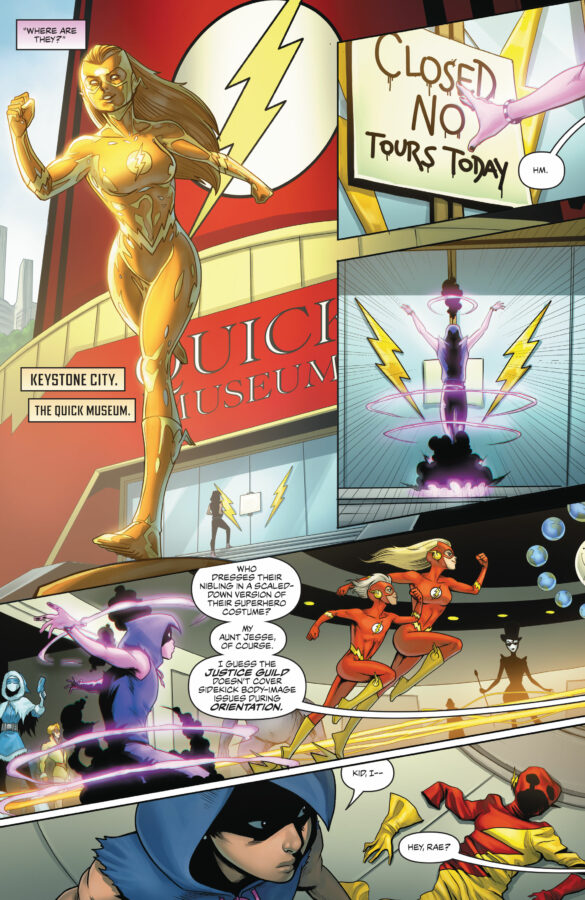 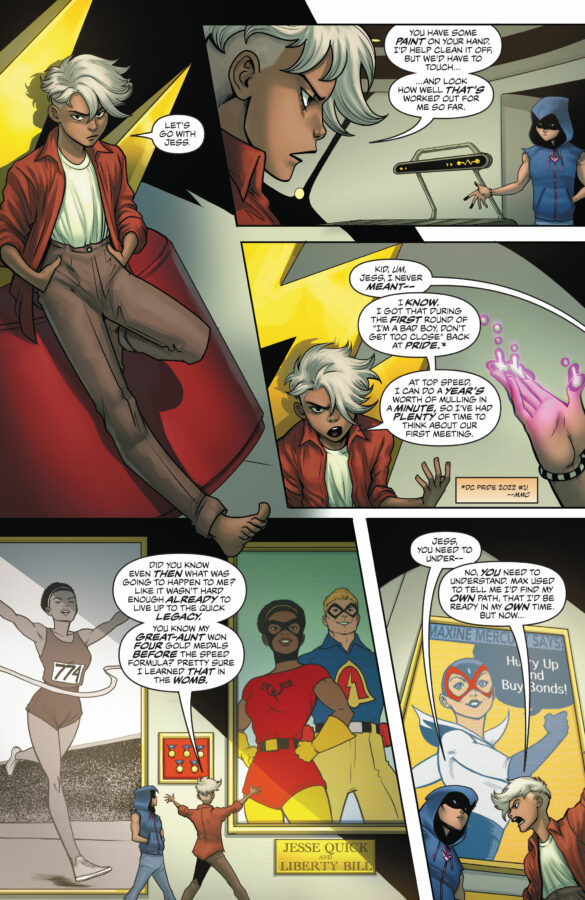 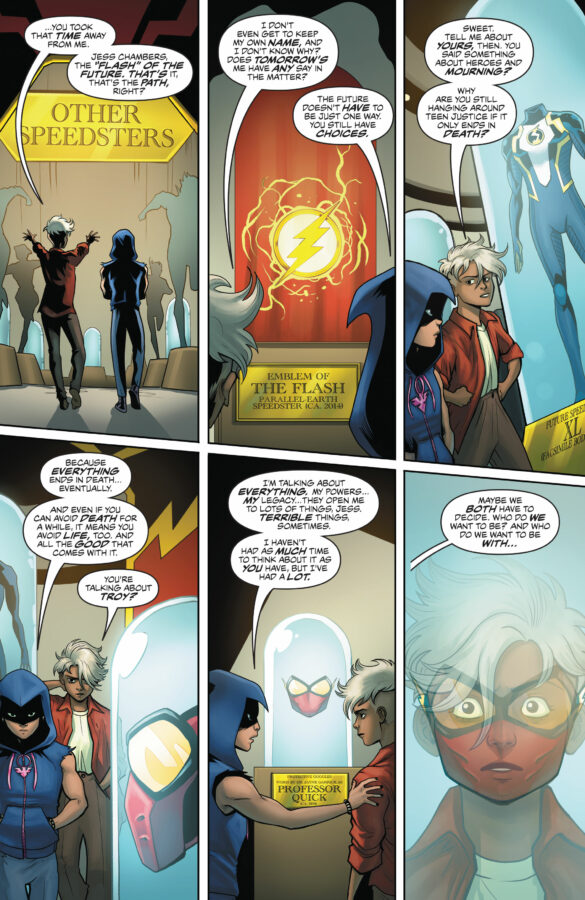 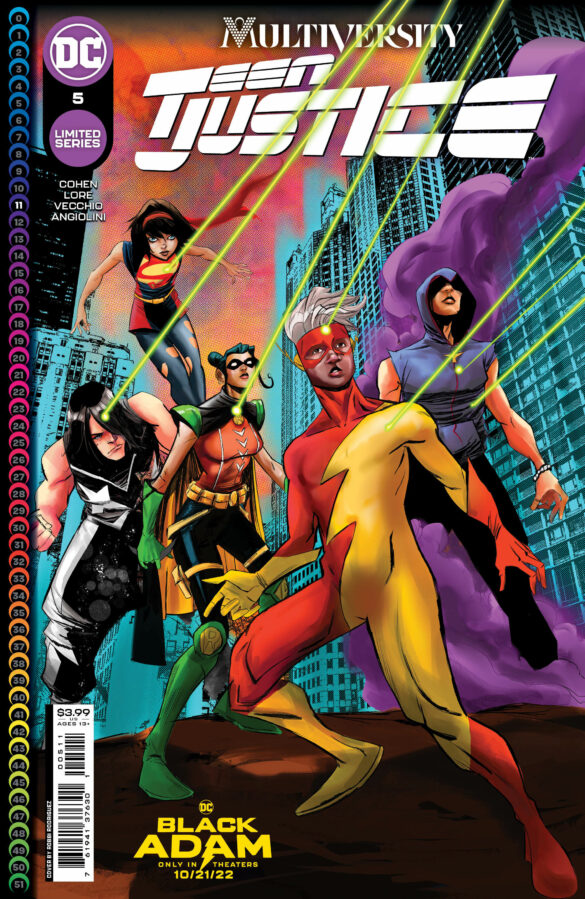 The issue ends on a cliffhanger, with one member of Teen Justice apparently sacrificing themself to save the rest. However, it appears the team would still be at the mercy of the Green Lantern Core despite this sacrifice. We shall have to wait until the conclusion, next month, to see what this selfless act will actually accomplish.

I’m really enjoying Cohen and Lore’s story set on this fascinating alternate Earth. The only drawback I can see is that there isn’t enough time in a single miniseries to really dig into the rich history of Earth-11. I look forward to seeing how they wrap this story up, and I’ll be watching for future projects that will revisit this fascinating alternate version of the DCU.