For fans of comic books, movies, television, video games, and everything pop-culture-related, the return of Comic Cons in a post-pandemic world is a ray of light after so long without them. The great people at Monopoly Events have worked hard to create a wonderful event for my hometown this year, with the Manchester Comic Con 2022, a convention that’s destined to live long in the memory!

Please check out the below press release for all the fantastic details:

Andy Kleek and the Monopoly Events team are
proud to bring you Comic Con Manchester!

​The next Comic Con Manchester in the summer of 2022 promises to be an event to remember for comic, tv, and film culture fans across the globe as we bring you a phenomenal guest line-up including Star Trek’ and Heroes legend Zachary Quinto, Teen Wolf stars Tyler Posey, Holland Roden, Shelley Hennig, Dylan Sprayberry, and Linden Ashby, Superman and Lois stars Tyler Hoechlin, Elizabeth Tulloch, Jordan Elsass, and Alex Garfin, the LEGENDS that are Lee Majors and Lindsay Wagner.

A guest line-up that already is truly unimaginable – and as always – it’s all by the fans for the fans.

The very first Comic Con Manchester  in June 2019 was something very, very special indeed as we mixed the two greatest decades of all time, the 80s and 90s!

Many of our events are inspired by Monopoly Events CEO Andy Kleek’s memories whilst growing up and this fan convention was certainly no exception.

We had Baywatch babes in the form of Erika Eleniak, Angelica Bridges, and Brande Roderick, Gremlins cast members Zach Galligan, Judge Reinhold, and Francis Lee McCain as well as others.

We also had some great photo opportunities for guests and visitors including a Gremlins Kitchen Special, Police Academy Blue Oyster Bar Special, AND a great opportunity for visitors to have photos taken with Pal Blake, aka Greedo in our very own replica Space Cantina from Star Wars!

Add to that our amazing list of props and set builds that we had on offer including Doctor Who’s Tardis, the Delorean from Back the Future, KITT from Knight Rider and a face-off between a full-sized Colonial Viper from Battlestar Galactica and a full-sized Tie Fighter from Star Wars and more! We also had an entire hall full of vintage consoles and game machines where visitors could play games from both the 80s and the 90s – WHAT AN EVENT THIS WAS!

Let us not forget our epic Traders Hall as well! Where you could buy everything from a dancing Gizmo plushie to a Baywatch lifebuoy! Finally, our league of loyal cosplayers were all in attendance with their amazing costumes and make up ready and willing to get in a selfie or 100! 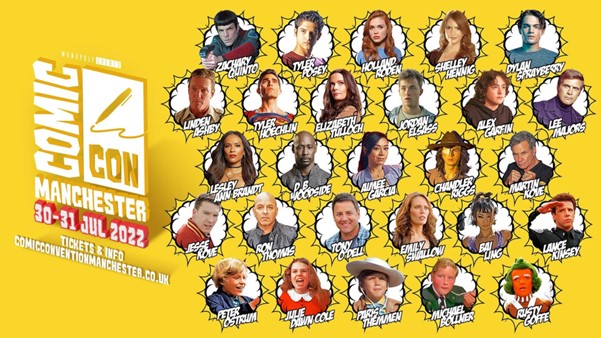 This promises to be a stupendous event and I, for one, cannot wait to attend and soak up the atmosphere and enjoy everything there is to take in.

Limited tickets are still available so please act fast while you still can and enjoy this once-in-a-lifetime celebration.