Review: Batman Vs Bigby: A Wolf In Gotham! #3

“An Enthusiast’s Guide To Book Burning” 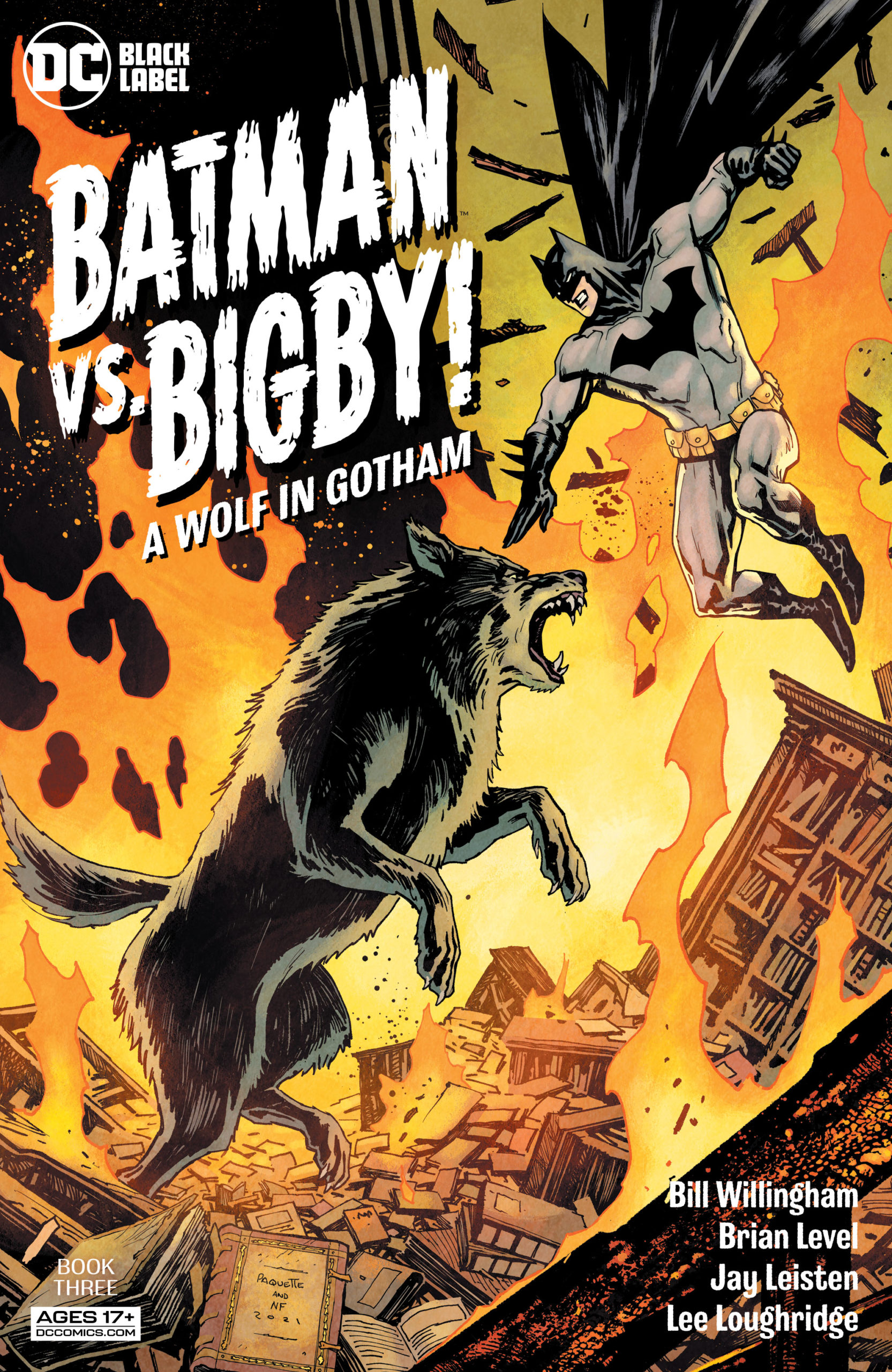 The Big Bad Wolf is real and he’s in Gotham! It’s a revelation to Batman and the GCPD, and their reaction is as cliched as ever. Plus, what was the Bookworm’s goal? Welcome to Batman Vs Bigby: Wolf In Gotham! #3

Now that we’ve fully gotten our heads around the concept that this series is firmly rooted in the world of Fables and NOT the Batman universe of mainstream DC Comics, it’s easier to see some of the commentaries that Willingham’s making. We already know “Robin” is a concept that’s brought to life by different individuals in the role, and as we saw in issue #1, it’s taken as a training program for sidekicks, or is it for endangering children?

However, with Batman Vs. Bigby: A Wolf in Gotham! #3, Willingham turns to the kneejerk reaction of seeing a giant wolf in the city. Sure, it seems like it’s a no-brainer to Batman that the wolf is simply a mindless monster, but the reader knows better.

It’s not the first time Bigby has been identified as a monster, he does have a reputation– just ask the three little pigs (or is it two?) and Little Red Riding Hood (now there’s a story!). What’s really clever here is that Willingham casts Batman and the Gotham City Police as the “shoot first ask questions later” types.

One would think that Batman would want some more information, but as the Dark Knight has been portrayed in so many various incarnations over the years, it’s completely fair to simplify his response as one might expect in older comics. He didn’t play around with Hugo Strange’s Monster Men in Batman #1 (Spring, 1940) when faced with a similar situation. It may seem like a stretch, but I think Willingham’s poking at the truths we often find in Fairy Tales. Maybe not the truth as far as facts, but the truth as far as the way people think. So much of the Fables concept is about reversing expectations, I mean you’ve figured out that Molly Grace is Cinderella, and if there’s one character in Fables who isn’t a “reverse expectation” scenario, I don’t know who is.

The theme of “reverse expectations” probably applies to Bookworm’s plot as well. Even Batman sees that in this issue and it adds a level to the mystery. It’s not the only one either, as we find out that Batman has a spy in all the criminal gangs of Gotham. This would seem to suggest there’s NO reason he hasn’t shut them all down if he can get a spy in all of them!

We’ve got to recognize the art of Brian Level and Jay Leisten. As we get into this issue it becomes apparent that their rendition of Batman sometimes takes on more animalistic and horror characteristics. It’s subtle, but within the context of the big idea behind Fables, it makes sense. He’s a real bat-man. Imagine that concept in a fairy tale. He’d probably be more like Man-Bat, than a man dressed in spandex. We’re not reinventing the wheel here, so he’s got to be recognizable, but it doesn’t mean he can’t exhibit this slightly. Additionally, Bigby in Wolf form is absolutely perfect. If you’re familiar with his depiction in Fables, you’ll be pleased to see Bigby in his full feral form in Batman Vs. Bigby: A Wolf In Gotham! #3.

The mystery gets a bit more complex as does the exploration of Batman’s “fairy tale.”  It’s subtle at times, but it really does promise something special to come when Batman has to accept a giant talking wolf.  Take a moment to enjoy the art as well as it emphasizes the aspects of Batman as a “fairy tale.”