Just Geek has released a new range of Christmas sweaters that feature various DC Comics characters including Batman, Superman, and The Suicide Squad. The first piece in the range is “Batman vs. Joker,” which is a half navy, half grey sweater that features a highly detailed patch embroidery of The Dark Knight and his long-time adversary, The Joker facing off on the front of the garment. Batman is knitted on one sleeve and Joker on the other, and there are white and yellow snowflakes on the Batman side and white and purple snowflakes on the Joker’s.

The next Batman offering in the range is black, grey, and yellow with the iconic Batman symbol knitted on the front of the garment, with black, grey, and yellow snowflakes all around. Compared to the other sweaters in the range this one’s quite plain and not as detailed. It is a nice piece of clothing, though, and I like that the colors reference those of the Batsuit.

The third sweater in the range is “Deck The Halls”. This jazzy little number is knitted in red and yellow and has an embroidery patch that features Batman beating up The Joker (who appears to have stolen Christmas presents) with candy canes. The embroidery patch also has the phrase “Deck The Halls” but “Halls” has been crossed out and replaced with “Joker”. The Batman symbol is also knitted on both sleeves and there are black, white, and yellow snowflakes around the sides. This is definitely the funniest jumper in the collection and it’s my personal favorite. 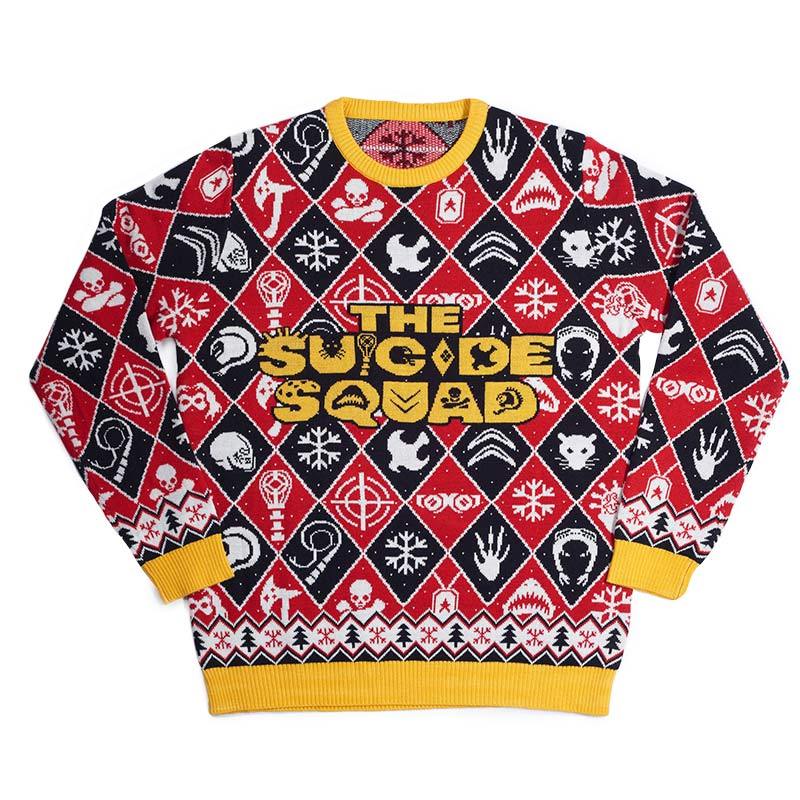 The last piece in the collection is “The Suicide Squad”. This one’s knitted in red, black, white, and yellow with a high-quality patch embroidery of The Suicide Squad logo on the front with Nordic details. This sweater’s adorned with details that reference iconic characters from The Suicide Squad such as Killer Shark, Harley Quinn and more.

They’re all available to order from the JustGeek website.