The variant cover to Batman #118 is a direct homage to the iconic Todd McFarlane-drawn Spider-Man #1 cover.

It turns out that artist Viktor Bogdanovic’s variant cover for the upcoming Batman #118 lifted more than a crouching pose from the iconic cover. If you look closely DC decided to add some fun little details to the cover. Sharp-eyed fans can spot the Batman logo changed to resemble the swoop Spider-Man font. Additionally Bogdanovic also altered his artist signature to a box that states, “After Todd McFarlane”.

Even more hilarious is how DC even reverted to their 90’s era DC Comics bullet. They also even included a fake Comics Code Authority box in the left-hand corner. Most humorously, the cover has a banner that playfully asks “All-new collectors item issue?” That’s another humorous direct lift from the Spider-Man cover that proudly brandishes “1st in an all-new collectors issue!” 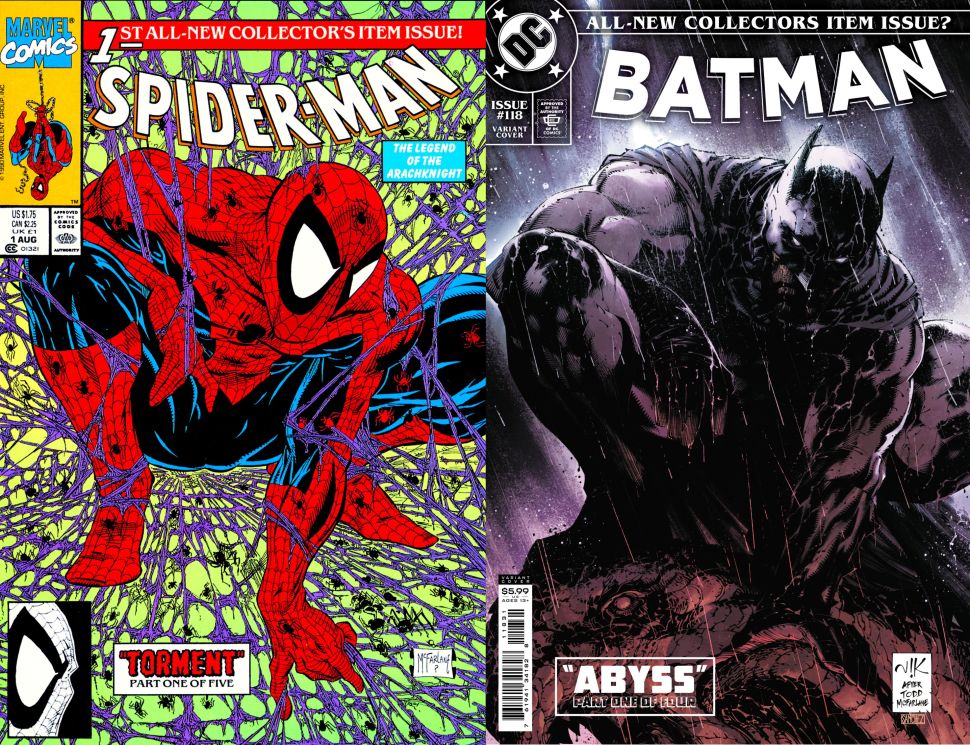 It’s arguable whether Batman #118 will be considered a collector’s issue, hence the question mark. Although, as it does mark the start of new creative team Joshua Williamson and Jorge Molina’s run, it could become one, even if it doesn’t necessarily guarantee an increase in value.

What’s even more perplexing is, why the homage? There doesn’t seem to be anything Spider-Man-esque about issue #118. It should be noted that before he was famous on Spider-Man, McFarlane left his mark on Batman. He illustrated a brief run on the Batman: Year Two story line. Perhaps this cover is the connective tissue between his Spider-Man and Batman runs?

Or it at the very least, it appears that Bogdanovic did it because he just loves McFarlane as an artist, and created this homage for fun. The artist posted a tweet professing his love for McFarlane’s work.

Hot damn! They went with the OG logo on this one and it rules.

After my art hero @Todd_McFarlane. Can’t tell you how many hours I’ve spent drooling over his legendary Spidey cover as a kid. So glad I got to do this. Coolest homage I’ve ever drawn for sure. 🤘🦇🤘 pic.twitter.com/zN3Hx2wzYC

All images maybe subject to copyright