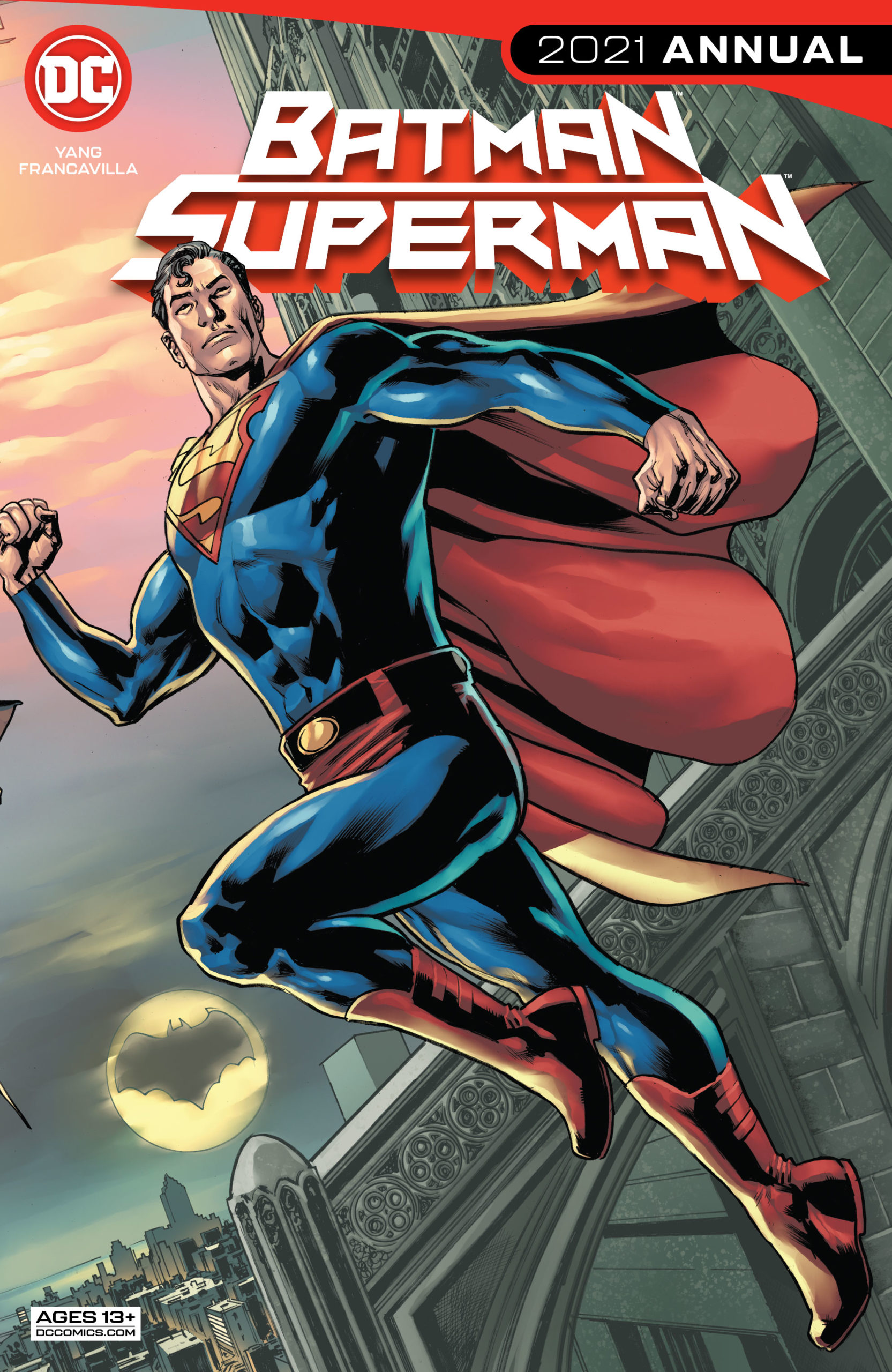 The Dark Knight and the Man of Tomorrow swap places in the Archive of Worlds in this week’s Batman/Superman Annual 2021.

After defeating Auiteur.10 the cinematic versions of Batman and Superman decide that it’s high time for a holiday. Each hero opts to spend time in the other’s (movie) universe; however, their trips unsurprisingly turn into working vacations. Batman and Robin spend their time hunting down Bizzaro Two-Face (the Bruce Wayne from The World of Tomorrow) while Superman deals with Lex Luthor, the Warden of Arkham Asylum in the World of the Knight.

In case you missed the news, DC has canceled Batman/Superman, however, “The Archive of Worlds” arc wasn’t the end of Yang’s tenure on the title. He had one more trick up his sleeve, and that’s this week’s Annual. Yang returns to his brilliant cinematic universe to tell two more tales, and man – these are some fun stories.

What makes Yang’s cinematic multiverse so much fun is the same thing that makes the larger DC Multi/Omniverse so enjoyable: the capacity to capture nostalgia and novelty simultaneously. In many ways, Superhero comics are the literary version of comfort food. These modern-day fairy tales are a nostalgic opioid for the masses, providing safe escapism from the horrors of modernity.

The problem is that too much comfort food can get old quickly. Grandma’s fried chicken is great, but if you were forced to eat it every day, it would undoubtedly get old. DC’s Earth-0 continuity is similar: it’s great, but its dependence on nostalgia often robs it of novelty. (Seriously – how many times has DC rehashed storylines from Crisis on Infinite Earths?). The multiverse is an elegant solution to this problem, as it allows a writer to play with nostalgia-laden characters in novel and innovative ways.

For example, Yang explores an alternate take on the Superman/Lois relationship by having his cinematic Lois a supervillain named Spider Lady. Because both The World of Tomorrow and The World of the Knight lack an established continuity, Yang can remix plotlines, characters, and settings, in ways that are fun and fresh.

Most of “The Archives of Worlds” was drawn by Ivan Reis, one of DC’s A-List artists, who of course, knocked it out of the park. Each issue was stunning. However, Reis did not return for the 2021 Annual, instead, DC tapped Paul Pelletier and Francesco Francavilla for this issue, having each artist draw a different story. What’s striking about this decision is that Pelletier and Francavilla have very distinct styles. Pelletier’s work feels more like your average DC house-style book, channeling a Jim Lee-type realism. Francavilla, on the other hand, has a very distinct, more cartoony aesthetic. Personally, I prefer Francavilla’s visuals. That’s not to say that Pelletier’s work is bad; rather, it lacks the individualism of Frankavilla’s style. Anyway, this shift in style works well, as the issue transitions from one story to the other.

Oh… to save yourselves some confusion, read the Batman side of this flip-book first. Our digital preview from DC led with the Superman tale, and it made both my editor and I go a little loopy.

Overall, the Batman/Superman Annual 2021 is a nice capstone to a phenomenal, albeit brief, run. Yang was kind enough to give us a fun follow-up on some of the plotlines he established early in his run. The Pelletier/Grey team and Francavilla do a great job leaning into the film aesthetic that Reis established in the monthly book.

This annual is proof that Yang likely has a lot more untold stories set in The Archive of Worlds that he can tell. It’s a shame that he won’t be able to explore his ideas for the foreseeable future.

Final Verdict: DC’s missing an opportunity by ending this series.