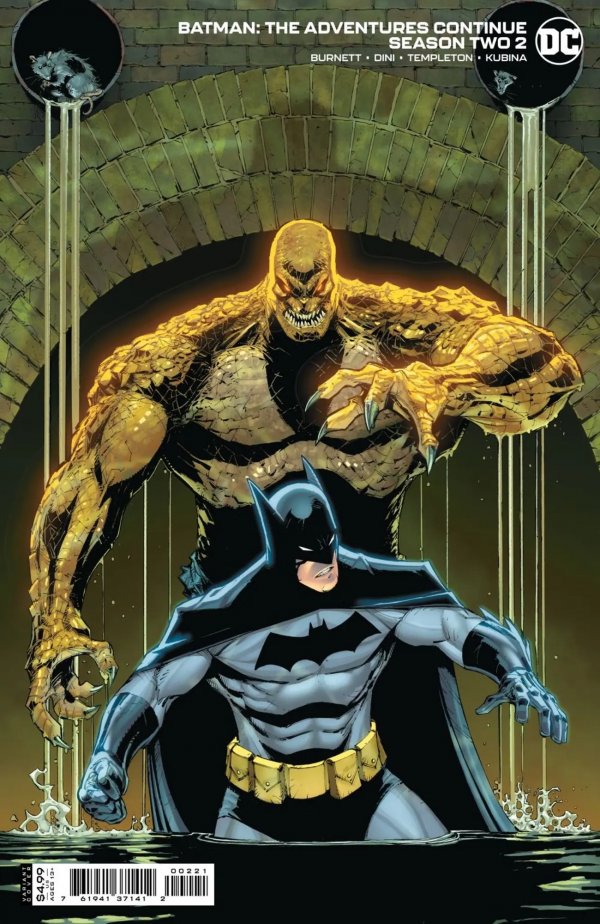 Here we are again; in the red skied, animated Gotham City. In Batman: The Adventures Continue #2.2, we join Batman, Robin, Nightwing and Deadman, as they face off against an ancient, newly discovered group of foes. Yes… The Court of Owls has returned! Only the Dark Knight and his team of allies can defeat this grizzly bunch of assassins, who last issue murdered a longstanding Batman: TAS cast member!

When Batman: The Adventures Continue season one was released fans were amazed and enamoured with how well it retold several classic Batman stories, leading to the reveal of the Red Hood. Now, with season two, we’re treated to a new introduction and view of The Court of Owls, who have only been in comics since 2011. This reviewer thinks that the main Batman title could take some notes from elements used her, but I can’t tell you yet!!! #NoSpoilers!

This time around Batman teams with former circus performer, and ghost; Boston Brand, A.K.A. Deadman. The heroes are tracking down the court after the gruesome murder last issue. I mean, how better to track/fight undead assassins than with a ghost? Now, with a little bit of a bold look Batman – wearing a medallion/head piece given to him by Zatanna – can see/hear Deadman. This makes for better reading. So that he doesn’t have to be possessing someone to interact with people. Although, seeing the likes of Alfred speaking like a grizzly New Yorker will never not be funny!

The Man Behind the Curtain

In this issue, we finally get to meet the spooky foe who’s been ordering the court around and. Trust me, it was a shock to see the reveal, as the writers definitely set us up to believe it was someone else. I was shocked that we were shown the mysterious leader of the court so soon in the story, but then realised why the Red Hood arc of season one was unique. This story, like the animated show itself, will wrap up after two episodes, an introduction, cliffhanger and the conclusion/reveal.

Ty Templeton and Monica Kubina gives us a new twist on a classic character (not to mention providing flawless art and color throughout),  Burnette and Dini show a new side of a somewhat unexplored one, and we get a twist that even the biggest M. Night Shyamalan fan wouldn’t have seen coming. It ties up everything with a nice bow and leaves us always wanting more. I can’t wait to read the next issue!

Batman: The Adventures Continue #2.2 is a fun romp. As always, there are laughs, heart warming moments, and Batman being written and drawn in a way that makes you say “God I miss this show”. I liked this issue the more I thought about it, after initially feeling a little jarred. After further thought, however… it was great!