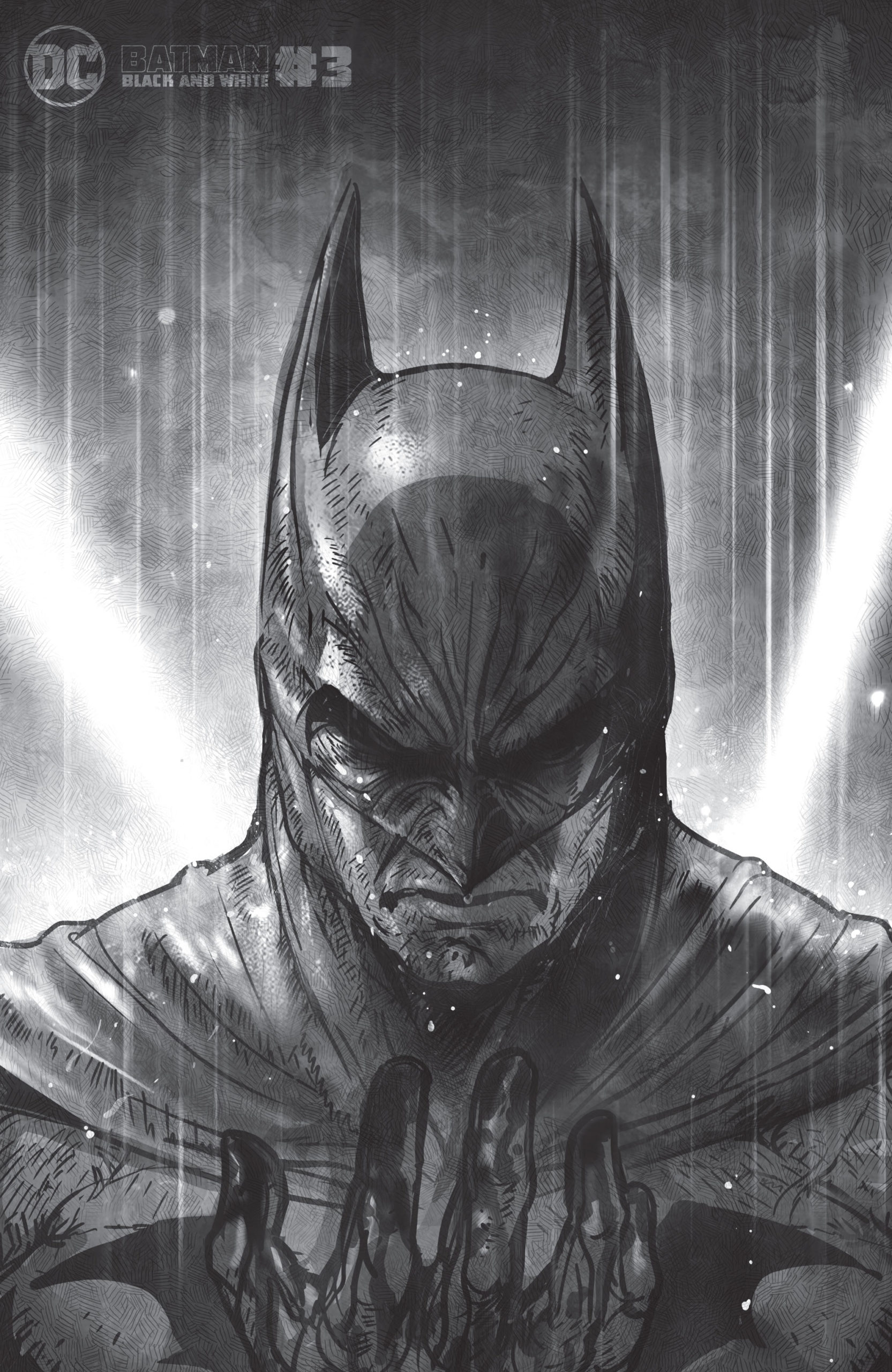 The beauty of the anthology series is that it allows voices, both old and new, to be heard in new and unique ways. To take chances. This is a formula that’s been working for this series, though Batman: Black & White #3 doesn’t seem to hit the same way that the previous two issues have. Part of the problem is that you may like I was, be thrown off by the fact that next month’s stories being advertised at the front of our review copy of the issue, while the current stories were printed at the end. A simple layout mistake, but one that threw me, as soon as I opened the book.

John Ridley returns with another story featuring The Next Batman, Jace Fox. If you’re current in your reading, this is a huge payoff; otherwise, you may wonder why Bruce isn’t under the cowl. Ridley executes commentary on several diverse issues on a single page and in about six lines. It doesn’t feel forceful, nor does it swing one particular way politically. From there, the story manages to pull in some friendly neighborhood spider vibes, with both the quick banter between Fox’s Batman and his sister sidekick, Tiffany, and the fantastic action.

Oliver Coipel delivers a masterclass with his work here. It’s art that feels like it belongs in color, but his detail and shading make it work so that you don’t need, or even want, it that way. With each hit our future Batman took, I could feel it through Coipel’s art.

“A Kingdom of Thorns”

Bilquis Evely takes the myth of Batman and gives it a medieval makeover. The story invokes a classic Arthurian tale, but it’s a bit more twisted. For this reason, it gave me my first let-down of Batman: Black & White. Don’t get me wrong, Evely’s art is fantastic, I love unique art like this – it makes you drink it in, and savor it like a fine wine – it just doesn’t scream Batman to me. Going back to the “Arthurian tale”, it does feel like Evely had a wonderful story to tell in that space, and just swapped out some characters for Batman and Ivy. Unfortunately, Evely’s story didn’t capture me as her art did. 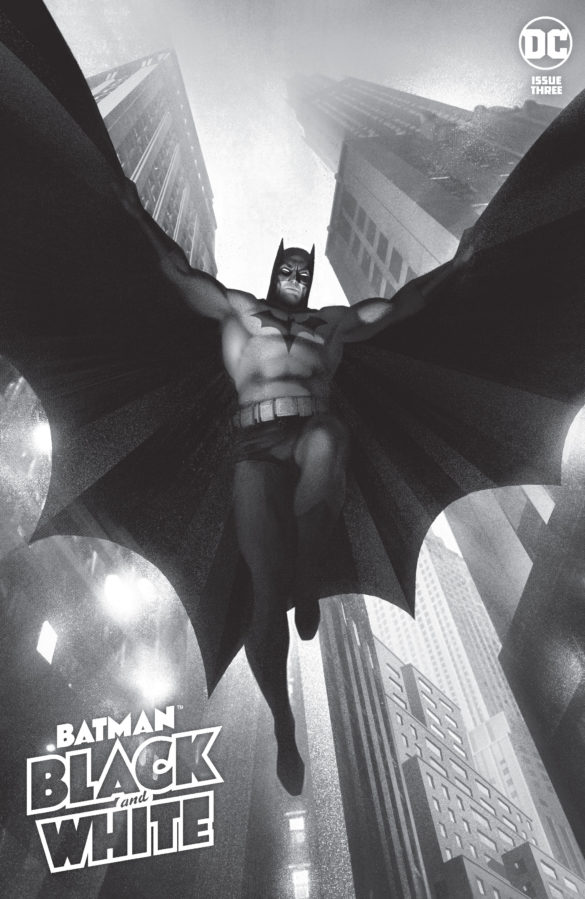 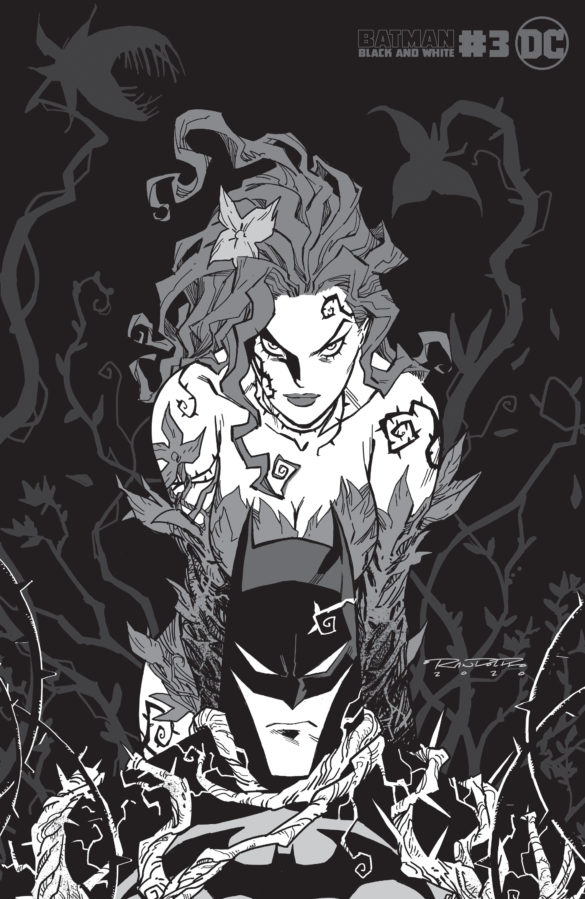 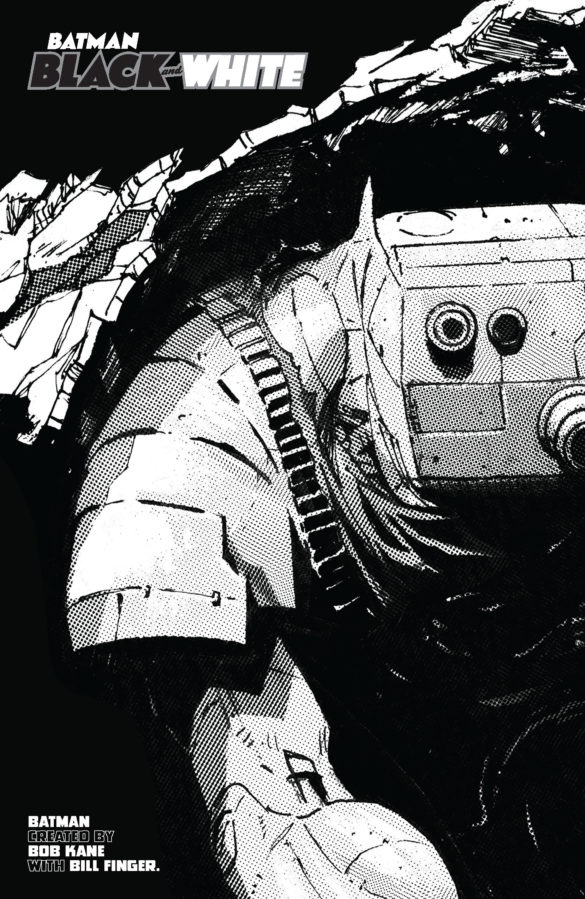 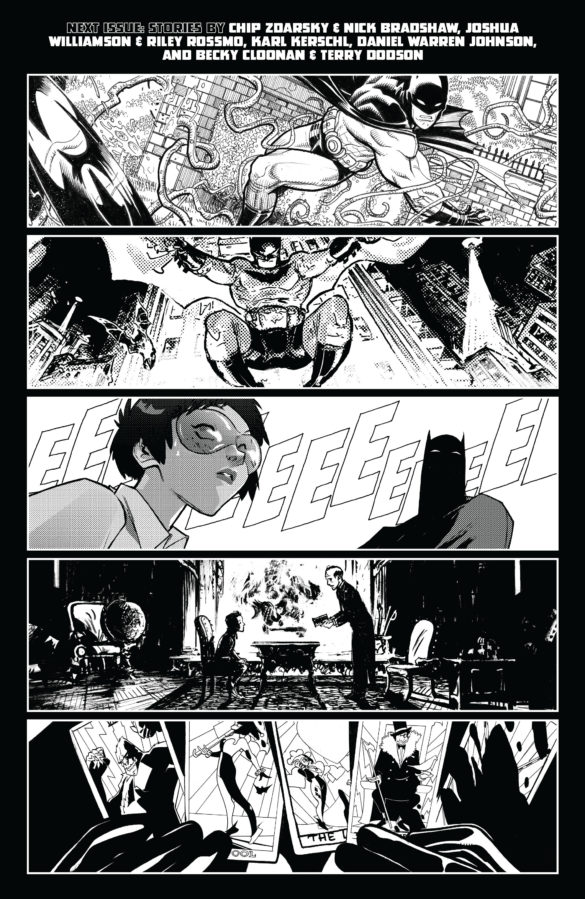 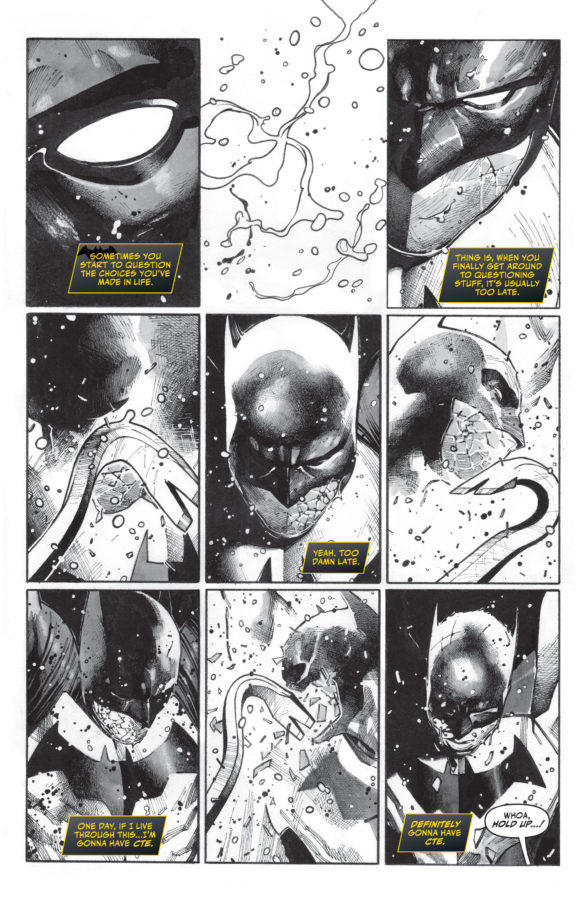 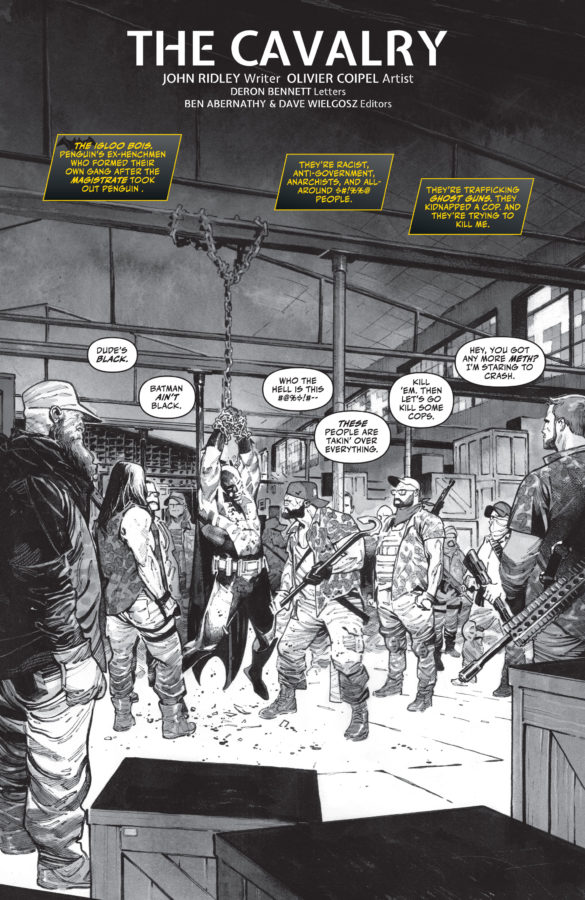 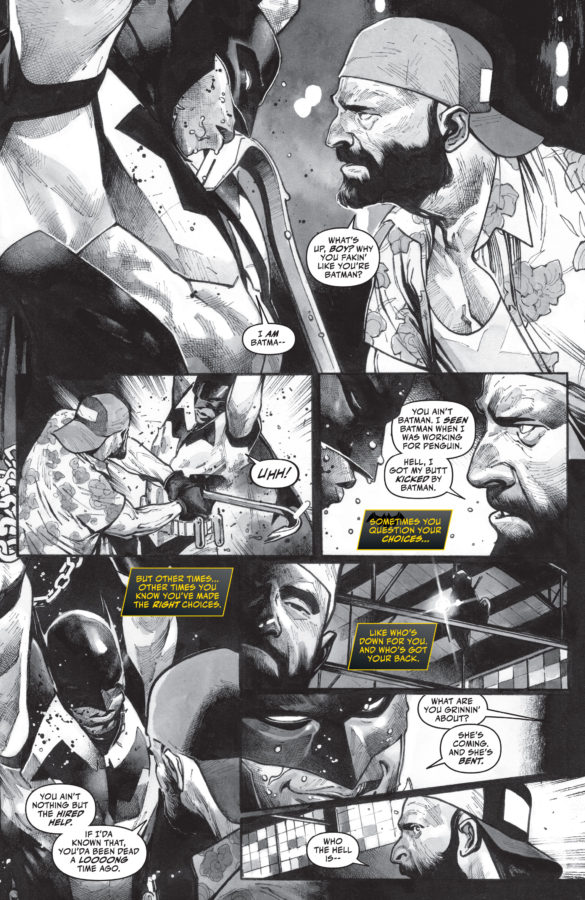 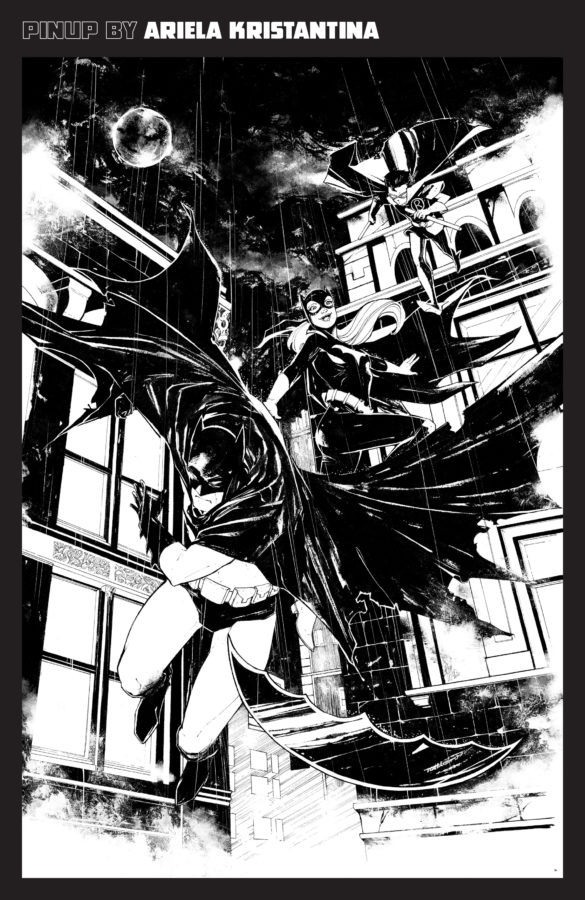 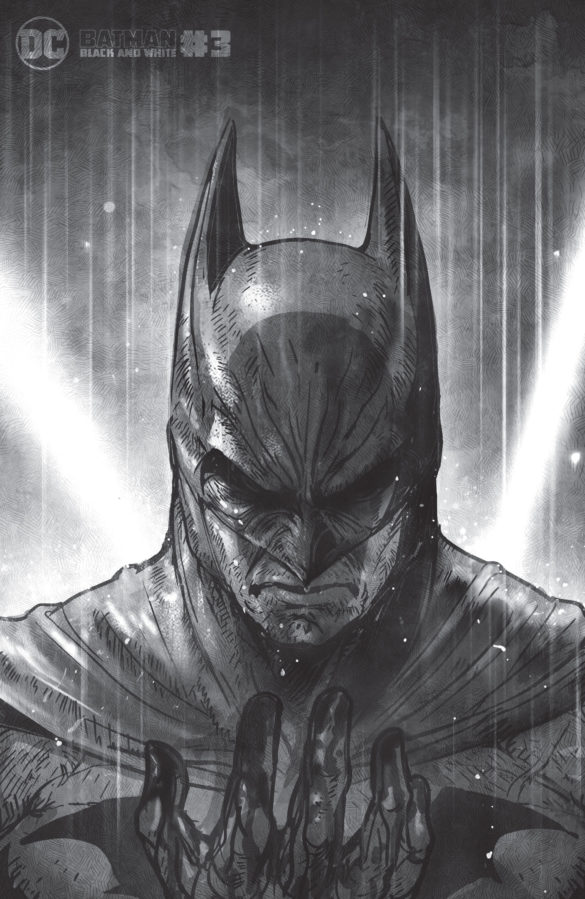 Bengal’s art is as simple as his story, and that’s not a dig. While art done in black & white tends to showcase penciling, shadowing, cross-hatching, etc., Bengal’s art is clean. It’s almost a complete wash of white and black, which makes it pop in Batman: Black & White #3. The story is about Batman’s simple admiration for his father and, while that’s absolutely lovely, depending on your level of DC fandom, could either leave you baffled or smiling by the final reveal.

It’s hard to say if The Cavalry or An Unquiet Knight is the highlight of Batman Black & White #3, but there’s something about this story from Tim Seeley and Kelley Jones that connects with me. This feels both like a Batman Black Label story, and a Justice League Dark one. Seeley captures what both Gotham and Batman mean to each other, while Jones enhances the horror Batman’s experiencing with his art. To be honest, this feels like a great first few pages to a larger issue that could be told by this dynamic duo.

Nick Dragotta makes his DC debut with this… interesting story. First, the positives – his art is wonderful. I love the look of this post-apocalyptic Gotham. Seemingly overrun by aliens (it’s truly hard to tell because there’s so little dialogue) and Batman in a giant Bat-bot, there’s a good mini-series somewhere in there. Dragotta’s art here would feel at home in an issue of The Walking Dead. However, the story falls flat because of the lack of dialogue. I don’t exactly know what’s happening, and when we finally do get some conversation, it seems to go in a completely different direction.

I’ve been loving this anthology series filled with unique voices, but Batman Black & White #3 lands as a quieter book this month. Perhaps it’s because the previous two issues held nods to the past versions of Batman while this issue looked to the future, or maybe it was the misprint that threw me off in the very beginning. This issue feels like a step backward in the series.