Future State: Harley Quinn #1 is everything! I admit to having the highest of hopes for what was to come from the new worlds that Harley Quinn could find herself in, and I wasn’t disappointed.

We find Harley in a world where Batman’s gone and all masks have been outlawed. Someone, or something, known as The Magistrate has taken control of Gotham City. Harley finds herself face to face with an old friend once captured. It seems Jonathan Crane has found a new life and purpose under The Magistrate, and has taken down the remaining menaces in Gotham.

Quinn has the chance to prove herself, and in doing so earn a semblance of freedom by helping Crane. Little by little she’s able to decipher what Crane’s been missing about why some villains still evade him. Crane isn’t satisfied with these mere morsels as Harley soon finds out. He pushes Harley to help him take down a villain that keeps slipping through his hands. Will Harley be able to succeed where Crane has failed time and time again? 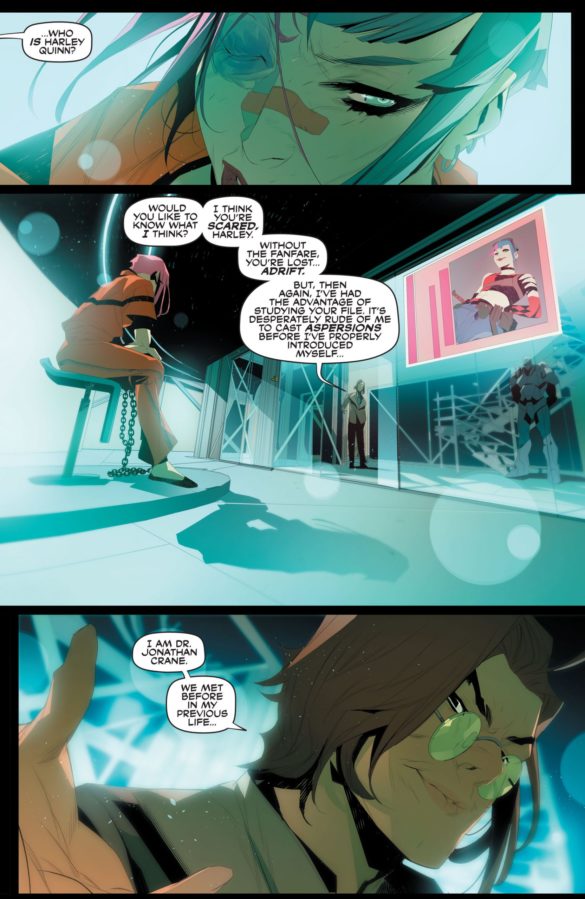 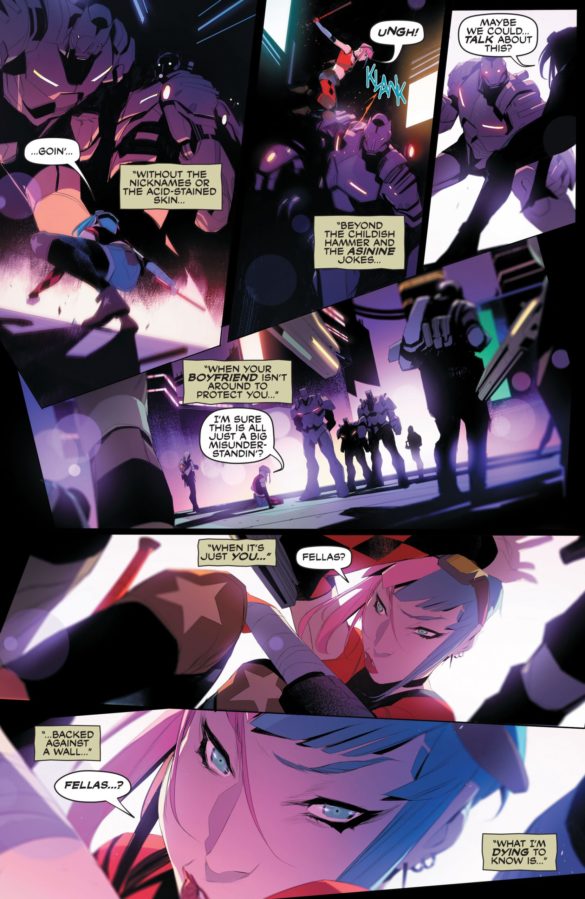 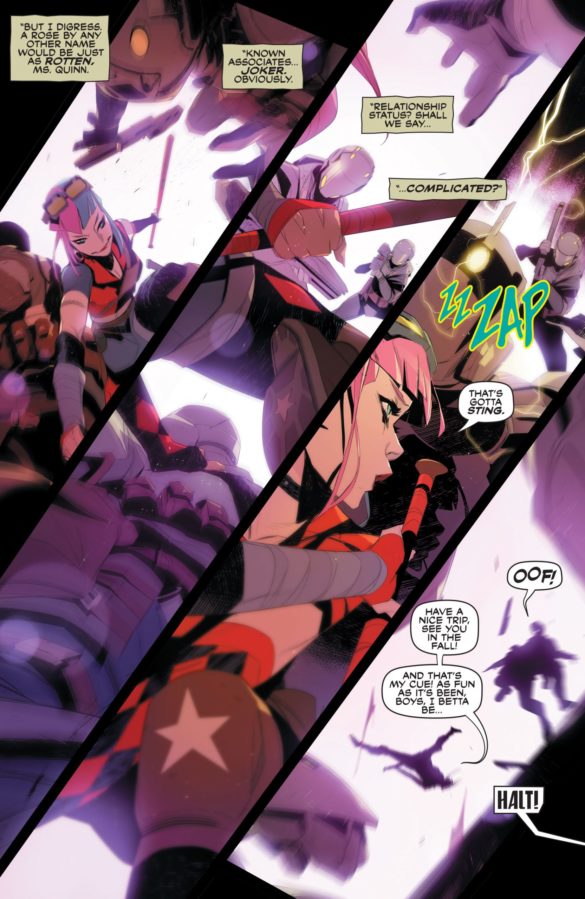 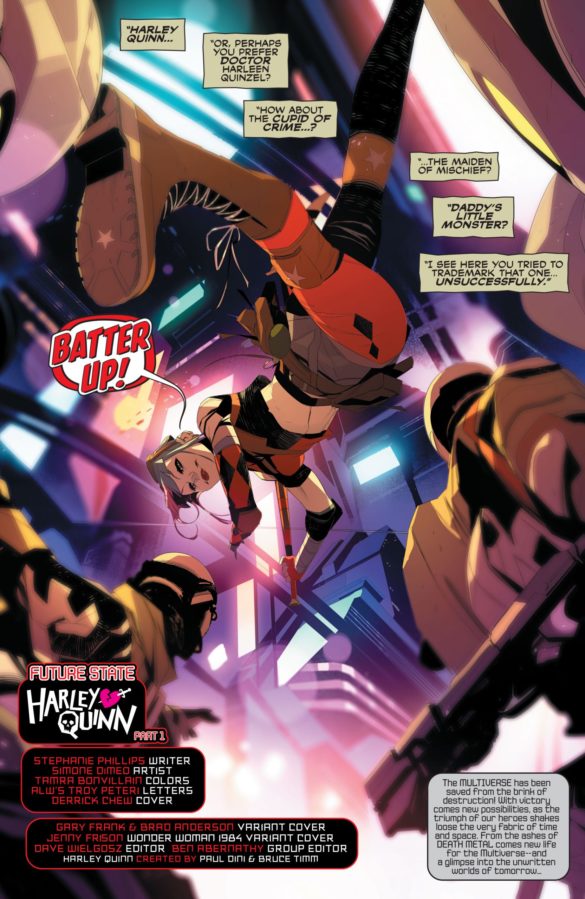 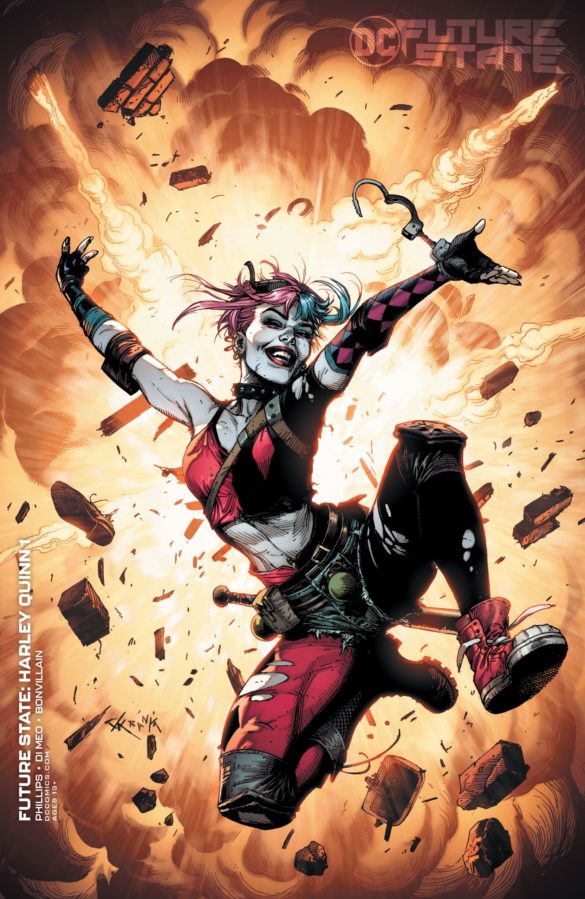 I may gush a bit, but the artwork in this book, by artist Simone Di Meo and colorist Tamra Bonvillain, is spectacular. I love the way the images just feel so alive, like you’re watching an animated feature. I’m living for the futuristic style that you can see, not only in the characters themselves, but also in the architecture and the backgrounds. Harley’s hair is absolutely adorable.

Everything about Future State: Harley Quinn #1 catches your eye, and the story flow is perfect. The villains brought in aren’t your normal ones, either and that’s an extremely nice touch.

My expectations for what was coming have been shaken to their foundations. Crane and Quinn’s rivalry is beautifully played out, and the banter between them was hilarious. I like that you get to see Harley getting under Jonathan’s skin. The only thing that rubbed me wrong was that in this version of the Harley’s world we still have the age old stereotype of Harley being “Joker’s Girl”. We’ve been far past that for years, even before the Joker War/Punchline story line, but then again, this is a completely different arc and story so maybe that can be forgiven. The story isn’t affected, but as it’s brought up several times throughout this issue, it was harder to ignore.

That said I truly look forward to what comes next, and am on the edge of my seat to see how the rest of this tale plays out.