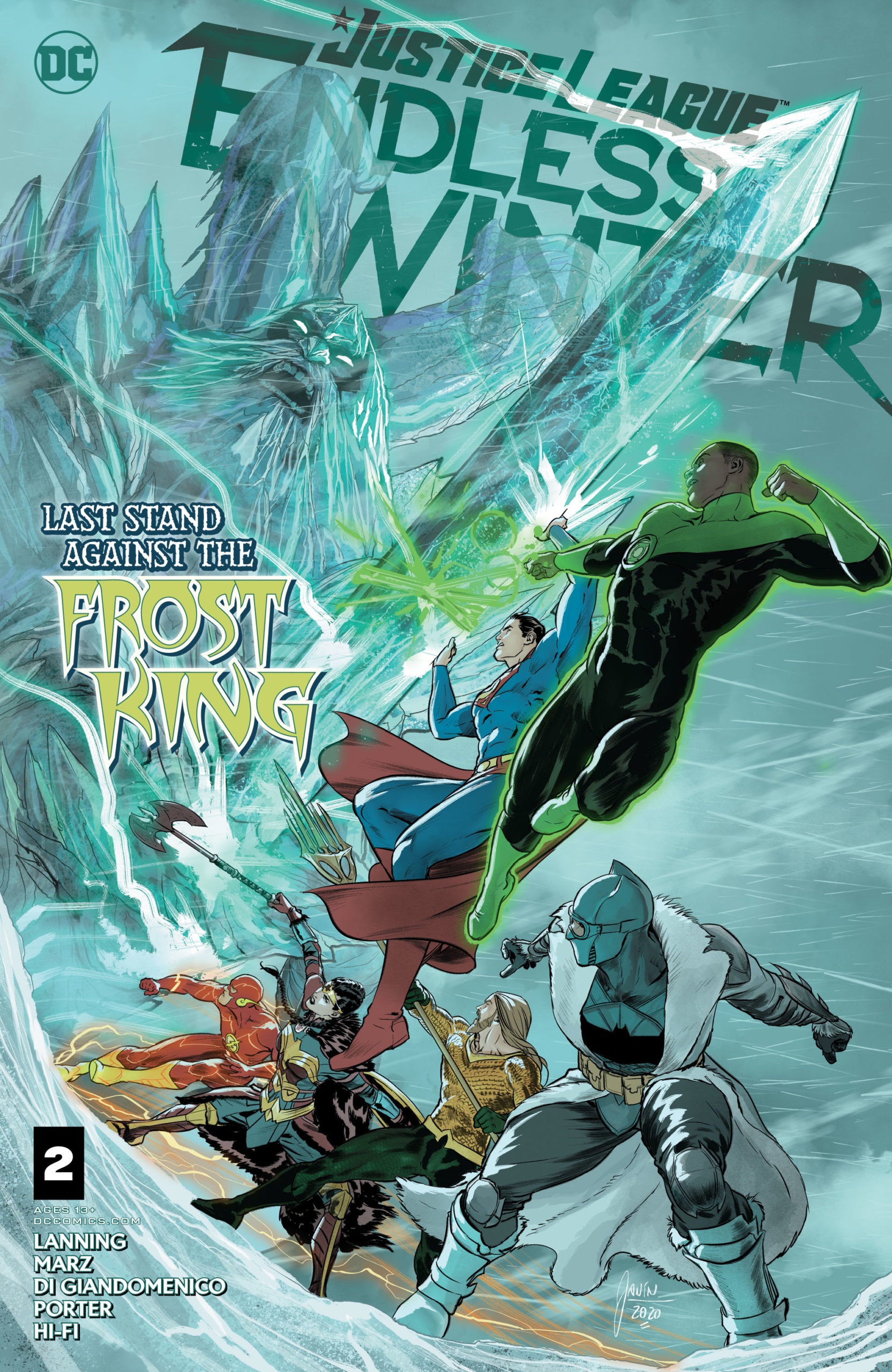 After countless deadly ice-creatures, and miles of frozen tundra, the League finally comes face-to-face with the genuine Frost King. As it turns out, all of the “Frost Kings” they faced up until this issue have been fakes. Or, more specifically – they’ve been avatars controlled by the Frost King from a distance. While the Flash, Green Lantern, Swamp Thing (who’s actually been possessed by the Viking Prince), Superman, and Wonder Woman tango with the Ice Avatars, Batman and Hippolyta venture into the depths of the Artic in search of the real Frost King.

If you’re reading this review, there’s a solid chance that you’ve been following this crossover, and as you’ve made it this far, I feel like I need to congratulate you for your endurance. I mean… this crossover was called “Endless Winter” for a reason. Clocking in at nine issues, this tale’s been a behemoth of a story, and frankly I’m not sure the payoff was worth the perseverance.

Yes – Justice League: Endless Winter #2 does have some interesting plot beat;. I especially enjoyed watching Black Adam interact with the League (or more specifically Superman). Not to mention, it was nice to have Hippolyta get some screen time. Mind you, both of these characters are going to be in the actual League come March, after Brian Michael Bendis takes over the book, so in many ways, “Endless Winter” serves as a launching point for Bendis, and his run. 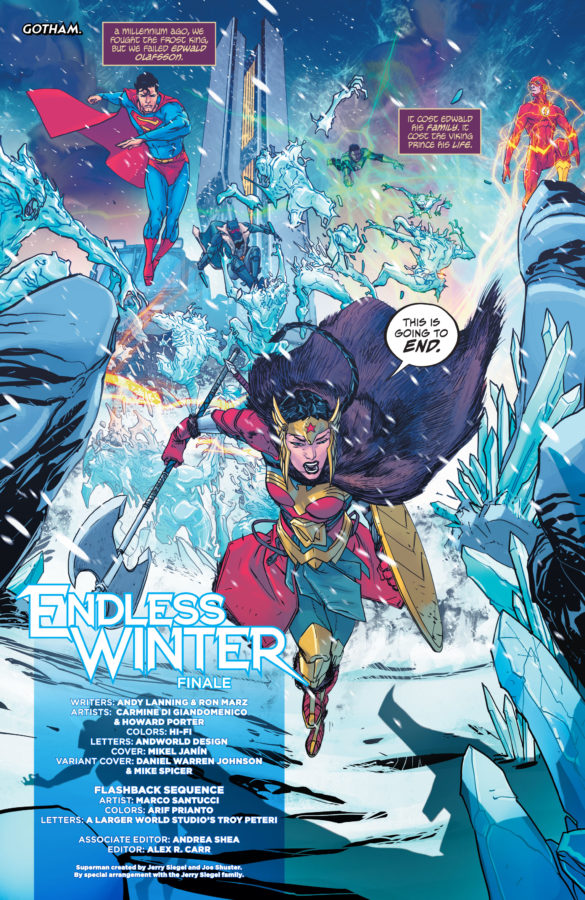 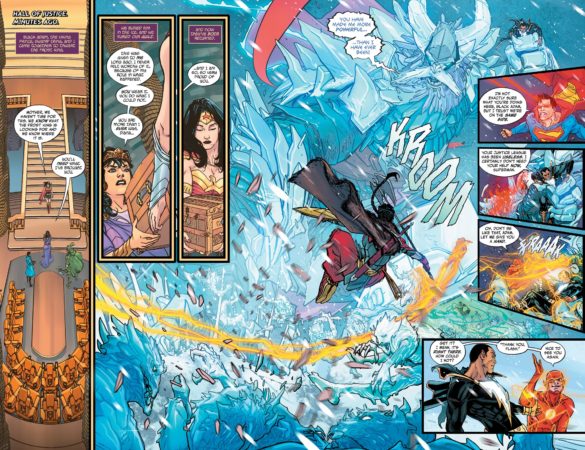 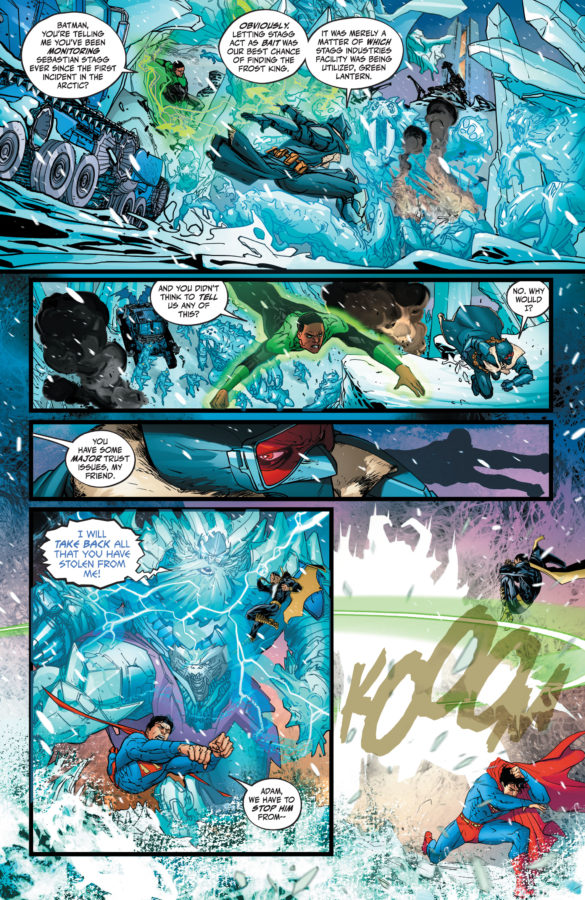 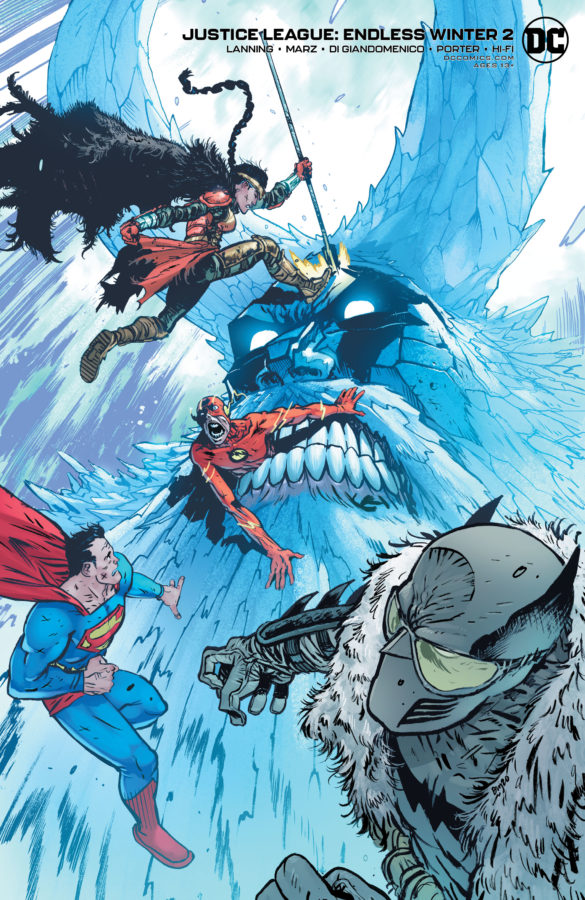 Nevertheless, this story was a slog, and frankly, I don’t feel like it accomplished much of anything significant. While it’s nice having some context for Hippolyta and Black Adam, very little of what’s accomplished in “Endless Winter” feels like new ground. Hippolyta has already joined the League at least once back during the 90s. back when Grant Morrison was writing JLA, and Doomsday Clock already established that Superman and Black Adam don’t like each other (not to mention various other moments in DC’s history). There is one caveat to my gripe here, and it regards Superman. “Endless Winter” does re-establish a certain aspect of the Superman mythos that has been missing since Man of Steel. However, this somewhat minor in the grand scheme of things.

I love Howard Porter’s pencils. Seriously, he is one of the most talented artists on DC’s roster. Porter’s work is singularly unique in its aesthetic. His work is very cartoony, while also detail oriented. His work, coupled with HI-FI’s coloring, really makes this book pop. This isn’t the first time that Porter has drawn these characters, as he’s a go-to guy for DC whenever they’re doing a crossover, and need a guest artist. Nevertheless, I never get tired of his work. His vision for these characters is so idiosyncratic that I never tire of his pencils. His work in this issue really does elevate a somewhat ho-hum story.

Justice League: Endless Winter #2 provides a satisfactory ending to an unremarkable story. Lanning and Marz’s script is perfectly serviceable and inoffensive, despite “Endless Winter’s” bloated, decompressed plot. As usual, Porter alone is worth the price of admission, as he cranks out page after page of eye-candy. Yet, I still stand by my previous comments: this story feels like filler.

Final Verdict: If you’ve made it this far, ya might as well finish. If not… don’t bother.