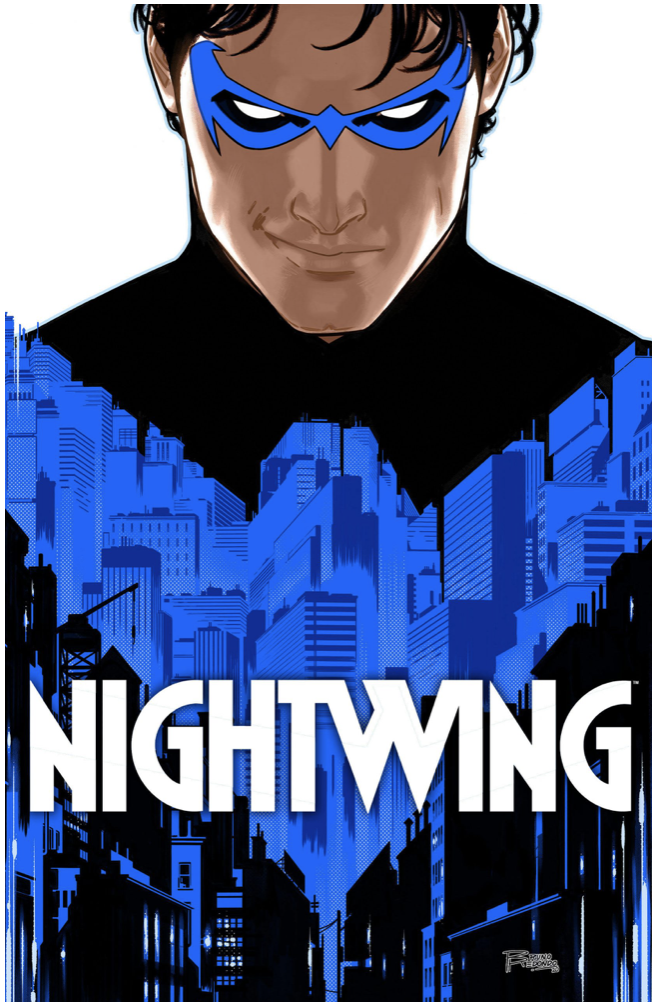 All week we’ve been hearing about new talents taking over the reigns of our favorite titles. Today DC Comics announced the new Nightwing creative team, and this particular fan could not be happier. Nightwing is one of my favorite characters, and one of my favorite comics. It’s a series I collect, and one that’s rarely let me down. Obviously, this means that any news of a creative shake-up will always catch my interest. Today’s announcement that the brilliant writer/artist team of Tom Taylor and Bruno Redondo will be guiding Dick Grayson’s destiny from March 2021 is very welcome news, indeed.

I’ve yet to read a Tom Taylor story I haven’t liked or loved, and many of those tales have been drawn by Bruno Redondo (Injustice: Gods Among Us, Suicide Squad, Earth 2), so, having this team take over from Dan Jurgens and company has alleviated many fears.

Nightwing Returns in March 2021 – With Batgirl By His Side!
DC’s Original Sidekick Gets a New Creative Team in Post-Future State Blüdhaven!
The New York Times bestselling Injustice and Suicide Squad team of Tom Taylor and Bruno Redondo take on Nightwing!

Nightwing, with Batgirl by his side, returns to Blüdhaven in March 2021 when Nightwing #78, by new New York Times-bestselling creative team Tom Taylor and Bruno Redondo, hits comic book shelves! Dick Grayson is back after DC’s Future State event—and his drive to keep Blüdhaven safe has never been stronger!

“Despite, awkwardly, killing him twice (in Injustice and DCeased),” said Taylor, “I’m a huge Nightwing fan. And I couldn’t be more excited to take on a hero I’ve always considered a DC A-lister. Our series is about showing that. It’s about putting Dick Grayson back on that pedestal where he belongs.” 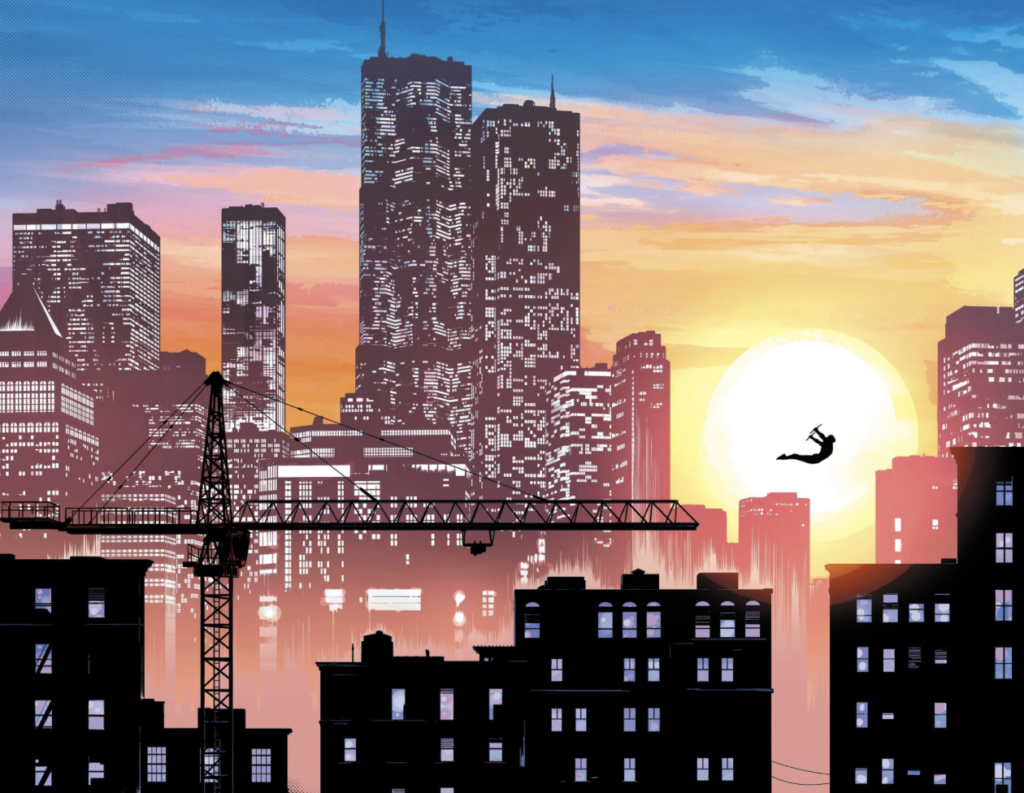 “It’s also about taking everything Bruno and I love about Nightwing and testing him in a completely new way,” continued Taylor. “Exploring how Dick reacts when faced with impossible odds, and with a life-changing opportunity which comes his way in our very first issue.”

In Taylor and Redondo’s Nightwing run, Blüdhaven has elected a new mayor with the last name Zucco, which can’t be good for DC’s first sidekick and former Robin—but is it good for Blüdhaven? When Nightwing enlists Batgirl’s help in investigating the politician bearing the same name as the man who murdered his parents, she unearths details that will shock and fundamentally change the hero.

“I’m not holding anything back from this project,” said Redondo. “Nightwing means kinetic potential, evolution, and a positive assertiveness more than any other character I’ve worked on…and that’s the kind of hero we all need right now. Working with Tom on Nightwing is the perfect evolution for us as a team! We have incredible ideas for Dick Grayson’s new adventures.”

Appearing in the first issue of Taylor and Redondo’s new Nightwing comic is a potential new sidekick for Dick Grayson – a three-legged puppy that he shields from harm in Blüdhaven’s alleys! Will Nightwing adopt this nameless mutt, and will she warm fan’s hearts as fast as Nightwing kicks her tormentor’s butts? Meet her for the first time on March 16 in Nightwing #78! 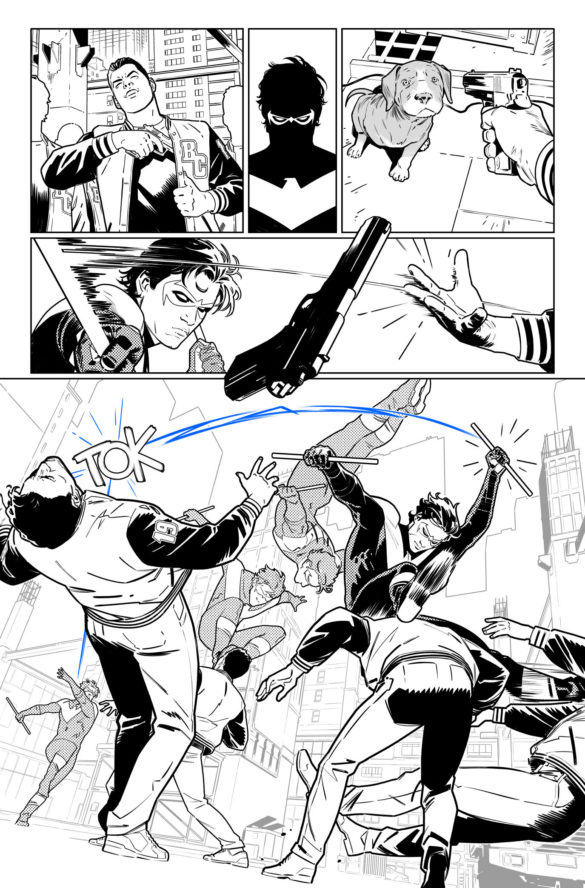 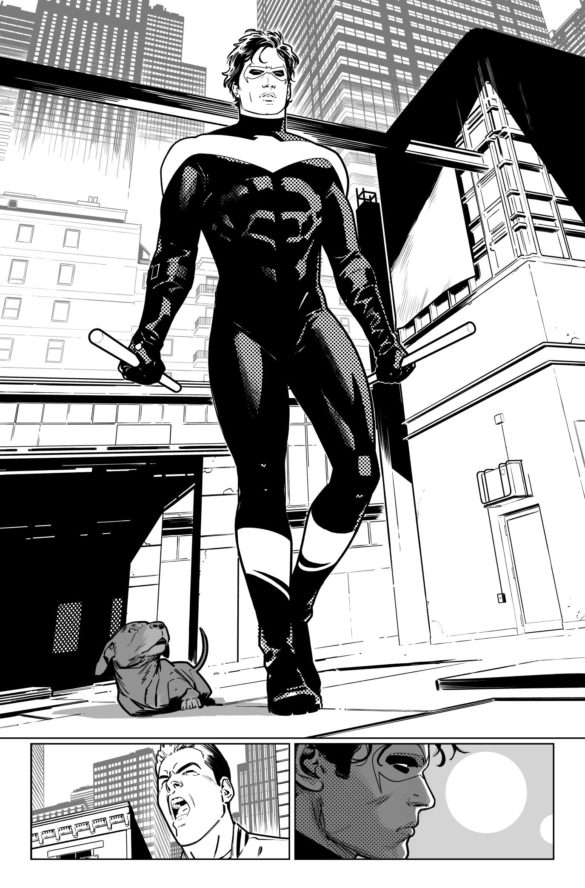 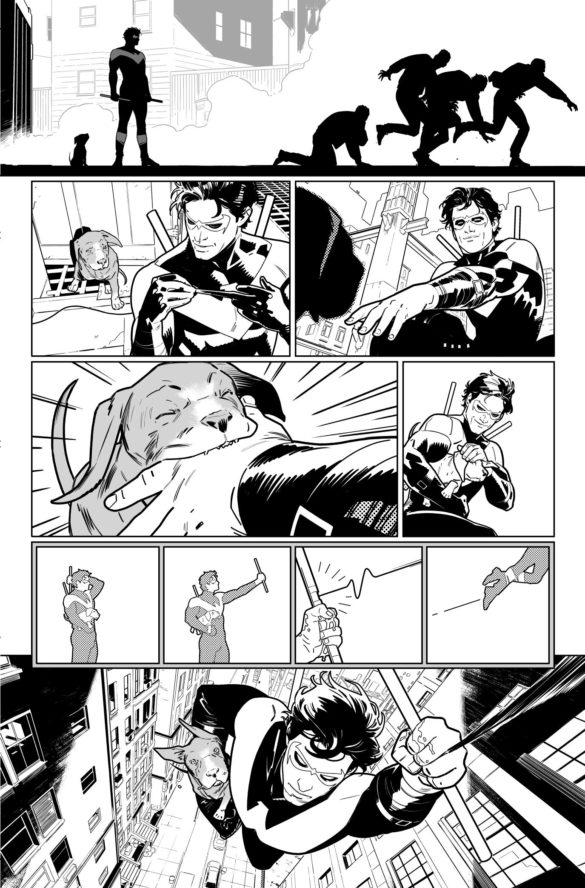 “This is the perfect time for a Nightwing story,” concluded Taylor. “It’s the right time for a charming, entertaining, positive force for good standing with the underrepresented, and pushing back against corruption and greed.”

Nightwing #78, written by Tom Taylor (DCeased, Injustice) with art and cover by Bruno Redondo (Injustice, Suicide Squad), color by Adriano Lucas, lettering by Wes Abbott, edited by Jessica Chen, featuring a variant cover by Skan, takes Nightwing to the next stage of his evolution as a hero! For more information on Nightwing, Batgirl, and the World’s Greatest Super Heroes, visit DC’s website at www.dccomics.com and follow DC on social media at @DCComics and @thedcnation.

I’m going to miss Dan Jurgens and Ronan Cliquet, but if any writer/artist team can honor these great talents, and usher in a bright new future for Dick Grayson and Barbara Gordon, then it’s Tom Taylor and Bruno Redondo.

Are you excited to see what the new Nightwing creative team will bring to the table? Do you collect this series? Let us know.

Review: Tales From The Dark Multiverse – Crisis On Infinite Earths #1