With months of quarantine, knowing that new comics are finally coming through is a delight. As comic innovators, DC have been able to keep their Digital First stories coming and allowed their creative teams to keep creating stories at a safe distance. Art and entertainment have kept the world grounded.

Publishers are dolling out the titles. After two weeks of the shutdown, the team has moved to work-from-home protocols to deliver these issues to you safely. The immediate Press release is below:

Here marks the expansion of DC’s DIGITAL FIRST publishing program, home of bestselling titles Injustice: Gods Among Us, DC Comics: Bombshells, the new Batman: The Adventures Continue, and many more fan-favorite comics. Under the robust new program, comic book readers will have more variety of content and immediate access to stories that have never been available on digital platforms.

“Comic book fans want more access to content than ever before,” said Jim Lee, DC Chief Creative Officer and Publisher. “This strategy is intended to get daily content to fans immediately, and also to ensure that when comic shops open back up for business, they will have new content and product that their customers will want. In the meantime, we will have properly stoked and protected the demand for comics, keeping fans interested in our characters and stories.”

“I really want to stress that regularly scheduled and solicited print comics, traditionally available on Wednesdays, will continue to be available day-and-date digitally on Tuesdays moving forward,” added Lee. “On the other hand, DC DIGITAL FIRST comics will be released seven days a week, with a strikingly different trade dress that will distinguish these titles from physical versions.”

In addition, on Monday DC is launching DC ESSENTIAL READS, a free digital promotion providing first issues of some of the most iconic graphic novels and collected editions in the DC library. Available until June 8th on a variety of digital platforms, DC ESSENTIAL READS titles include Watchmen #1 by Alan Moore and Dave Gibbons, Batman #608 by Jeph Loeb, Jim Lee, Scott Williams, and Alex Sinclair, The Sandman #1 by Neil Gaiman and Sam Kieth, Dark Nights: Metal #1 by Scott Snyder and Greg Capullo, Doomsday Clock #1 by Geoff Johns and Gary Frank, Crisis on Infinite Earths #1 by Marv Wolfman and George Perez, Mister Miracle #1 by Tom King and Mitch Gerads, and more.

So, without further ado! The comics for Week 4, starting with our beloved Dark Knight.

Batman goes after the biggest criminals in Gotham City: Bruce Wayne’s billionaire peers. But when these blue-blooded businessmen turn to the Joker for help, they find themselves in over their heads. It’s up to Bruce Wayne to step in and save them…even though he may be just as guilty as the rest.

A monstrous creature is appearing in the countryside outside of Metropolis and putting the beatdown on Superman. Can Clark Kent solve the mystery behind this muck beast or will Superman be buried for good?!

Wonder Woman visits an old friend on her last day, but afterward, Diana’s day turns into a nightmare. Meanwhile, the Penguin gathers a group of villains to enact a new plan against their heroic enemies!

“Worth” — Aqualad fights off a surprise attack from the Electrocutioner!

“A Father’s Favor” — Black Manta recruits Aqualad to assist him on a very personal mission.

The Flash has arrived in the 25th century to face down the villainous Eobard Thawne, the REVERSE-FLASH! But what Barry discovers isn’t a city in ruins, but a utopia filled with people who can use the Speed Force the same way he does. Can the Flash stop the sinister speedster when he’s surrounded by people who would die for him? 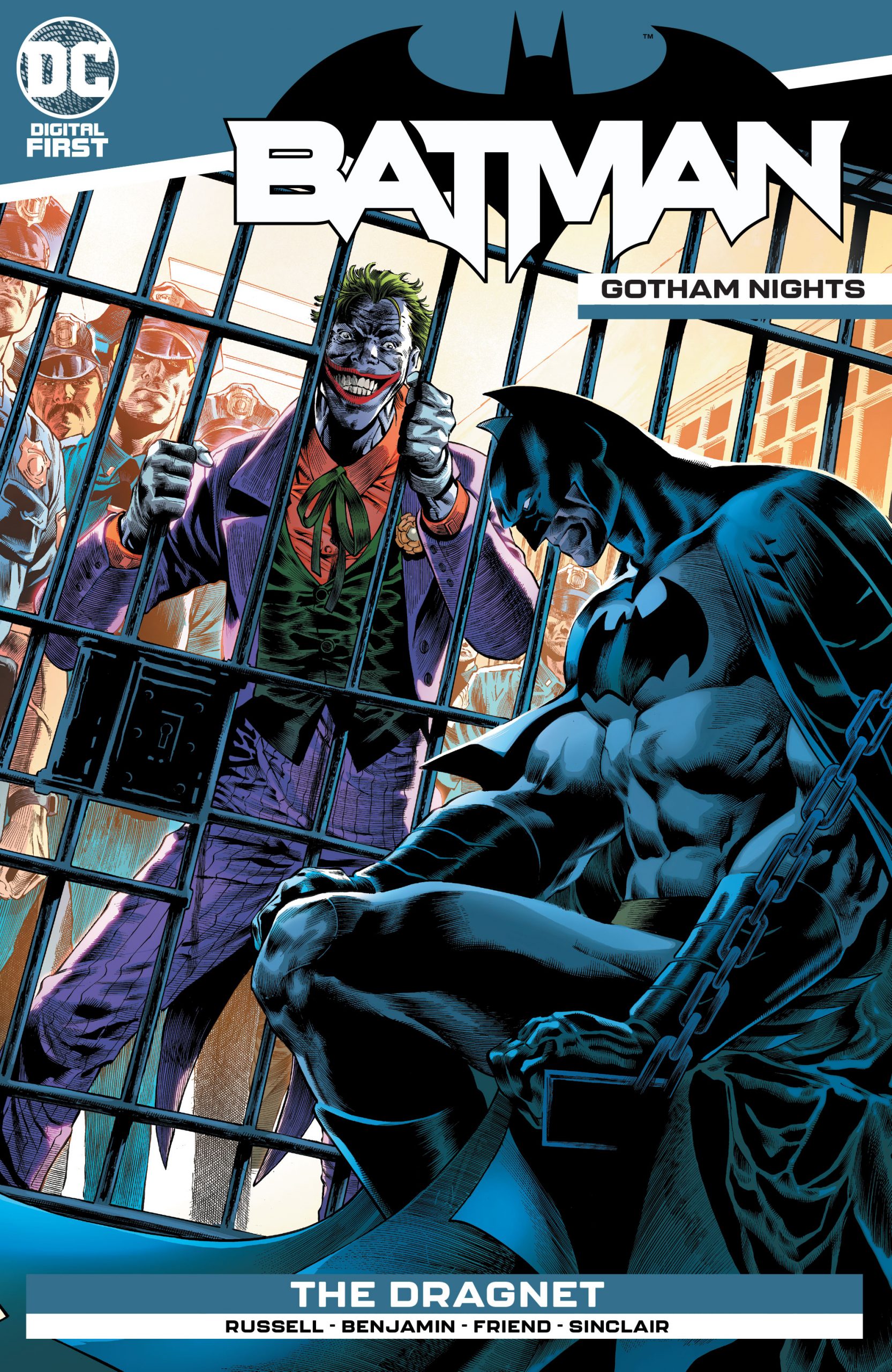 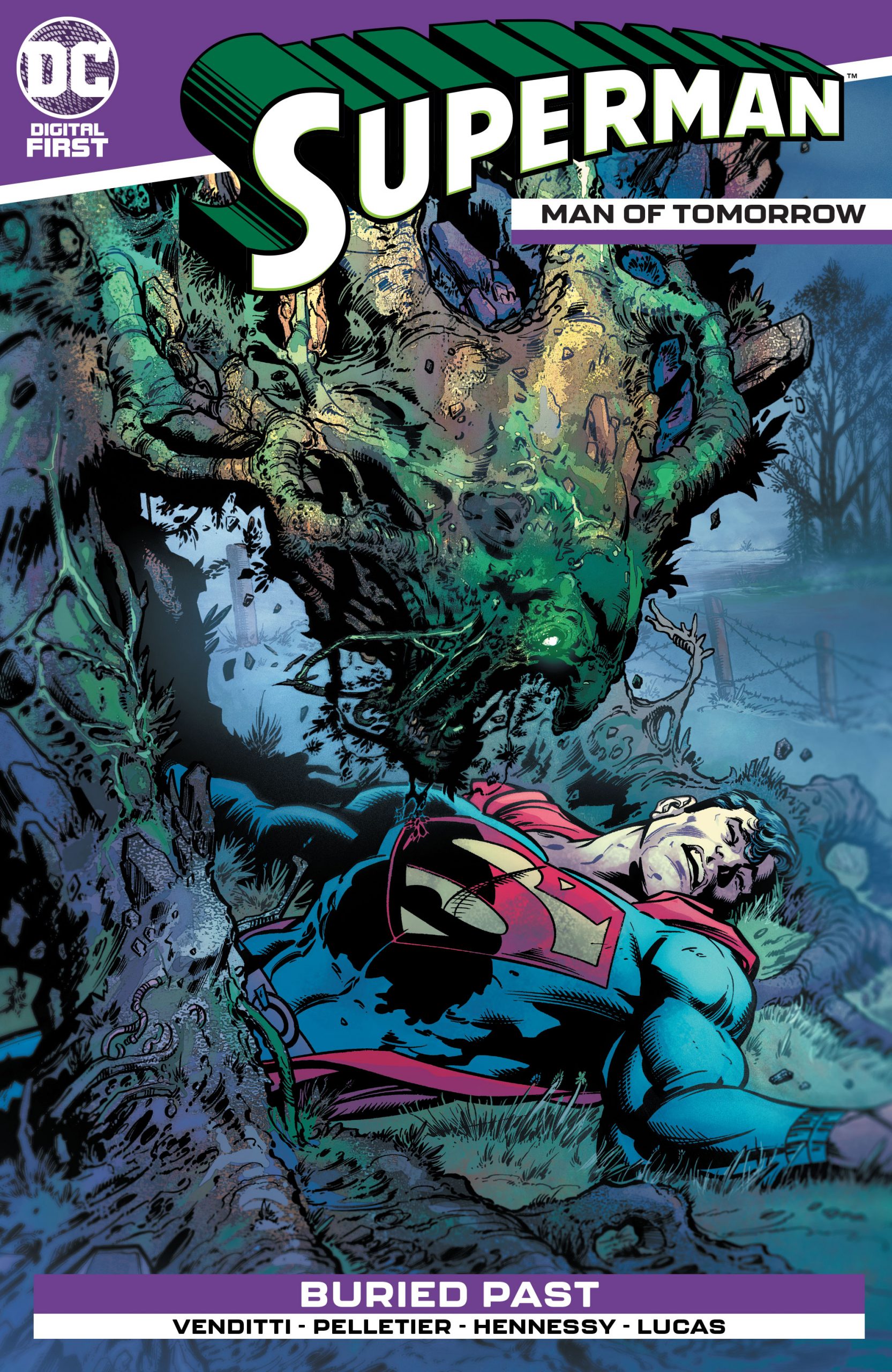 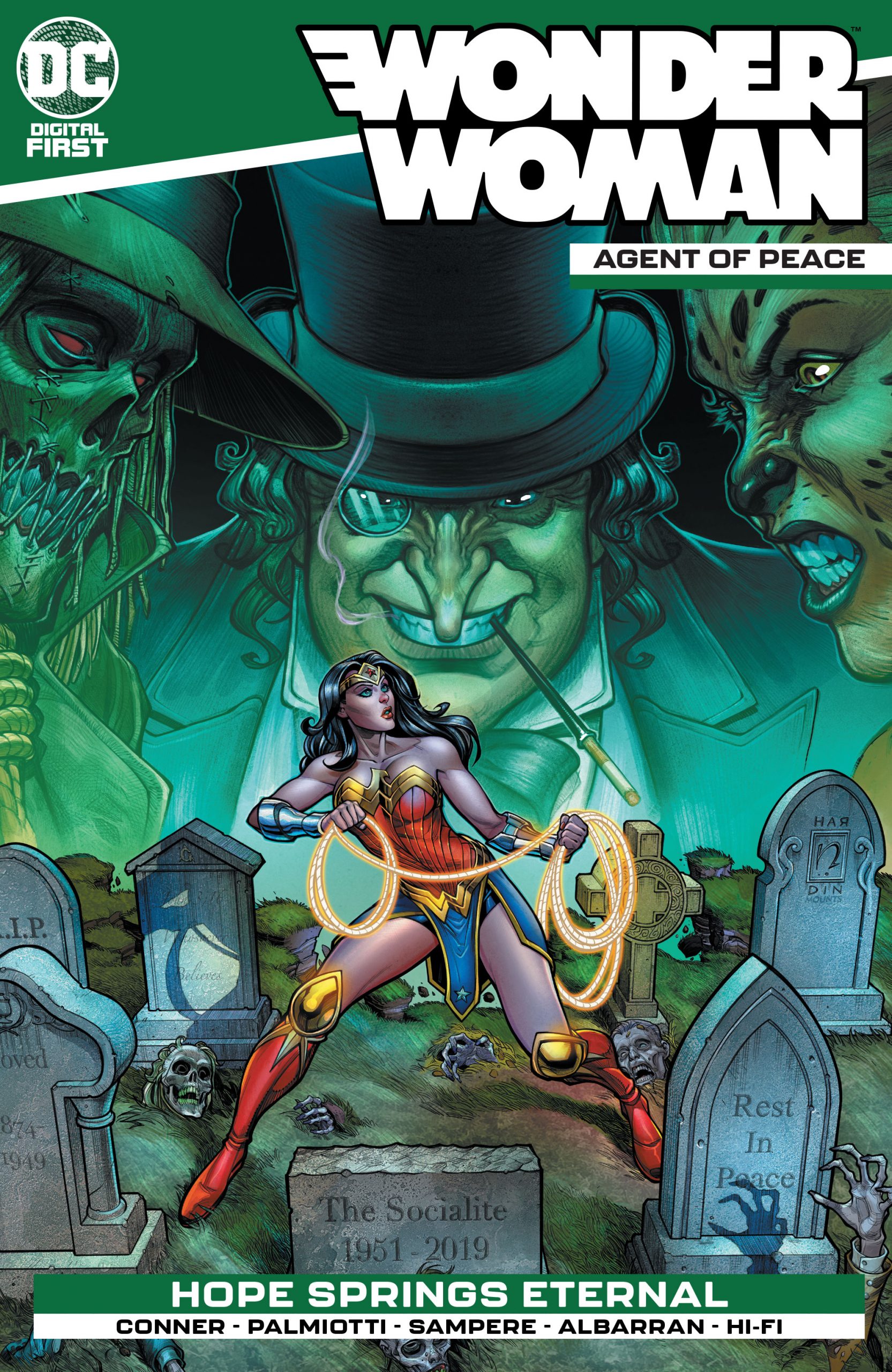 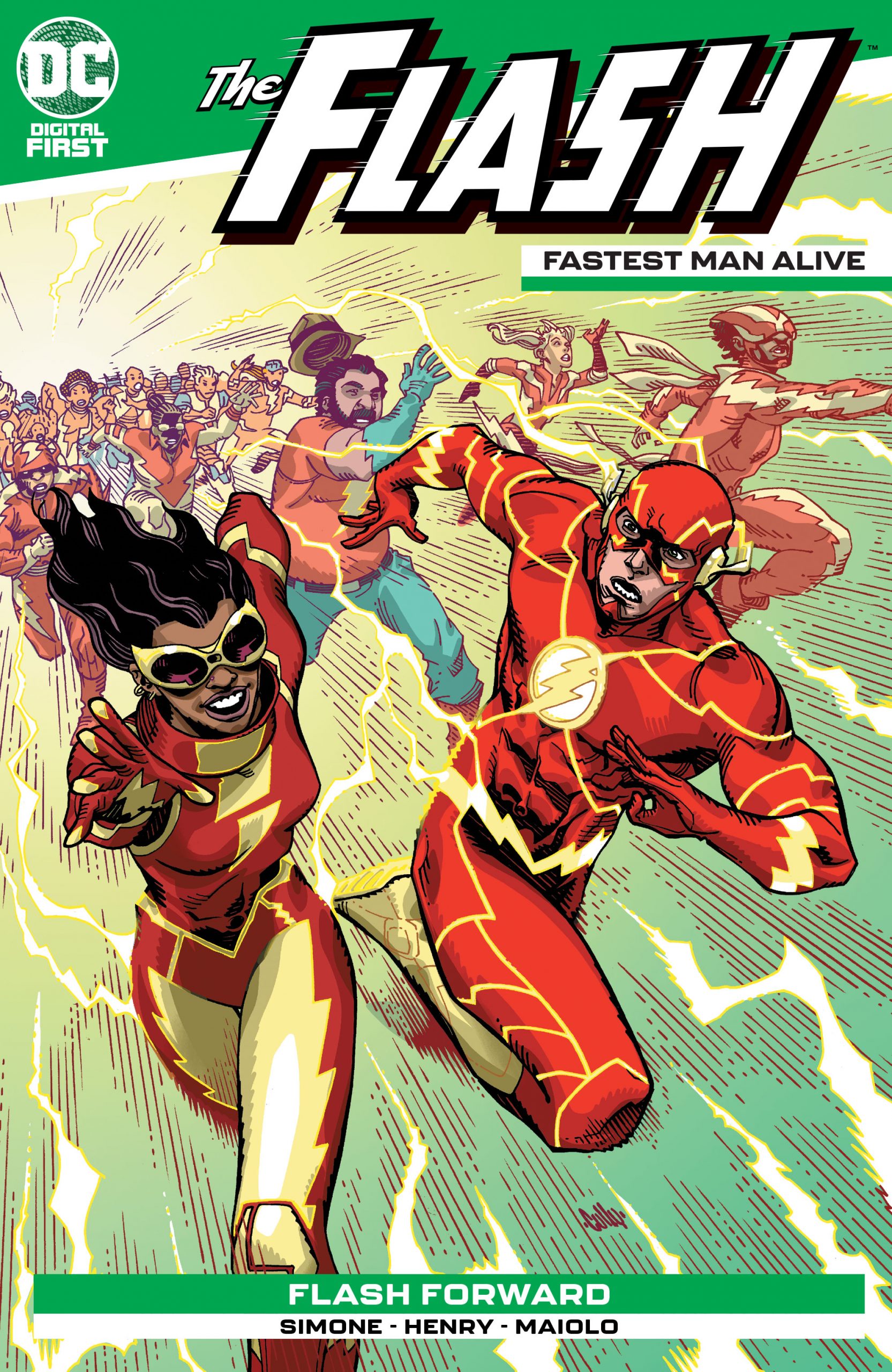 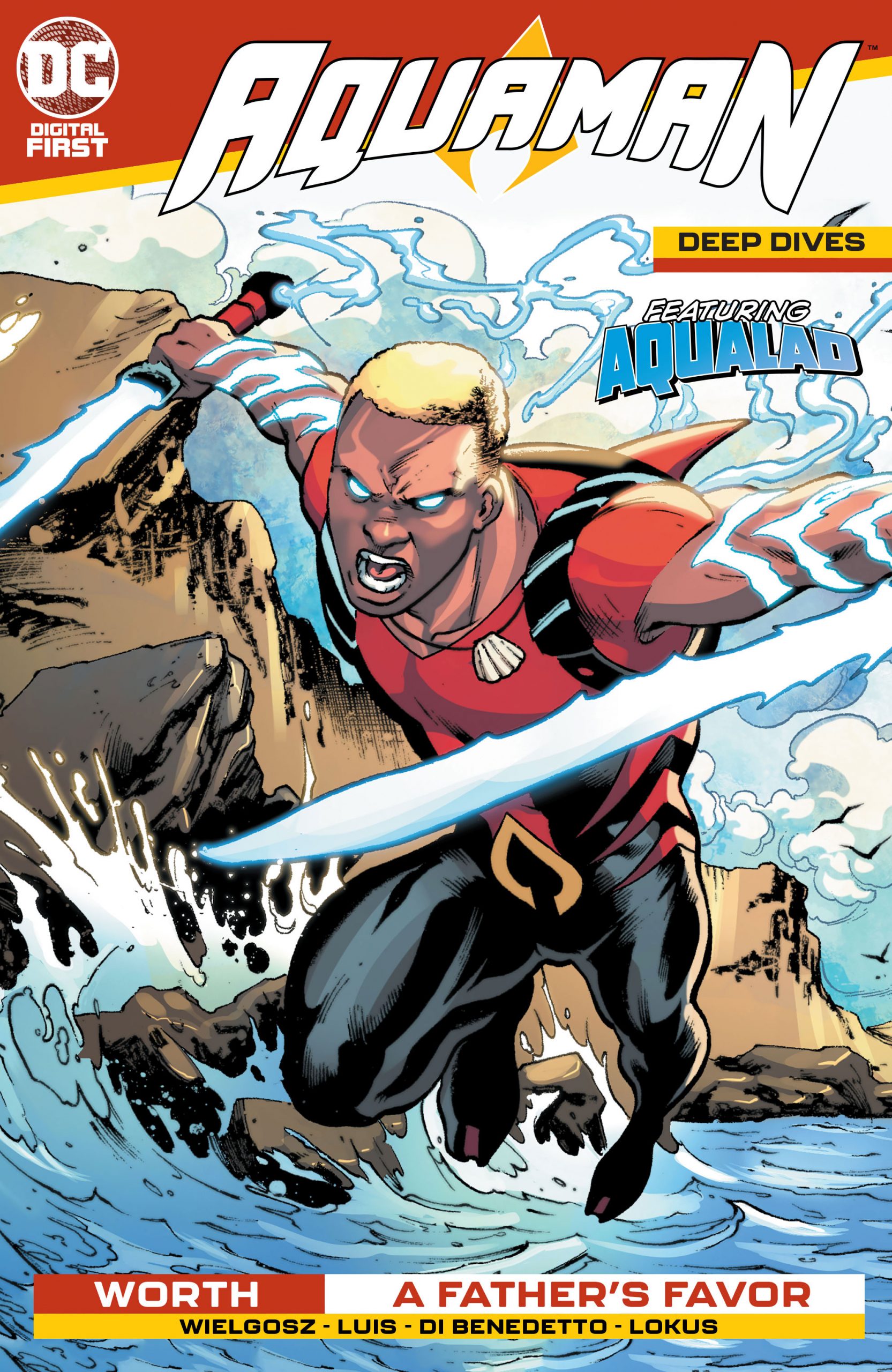 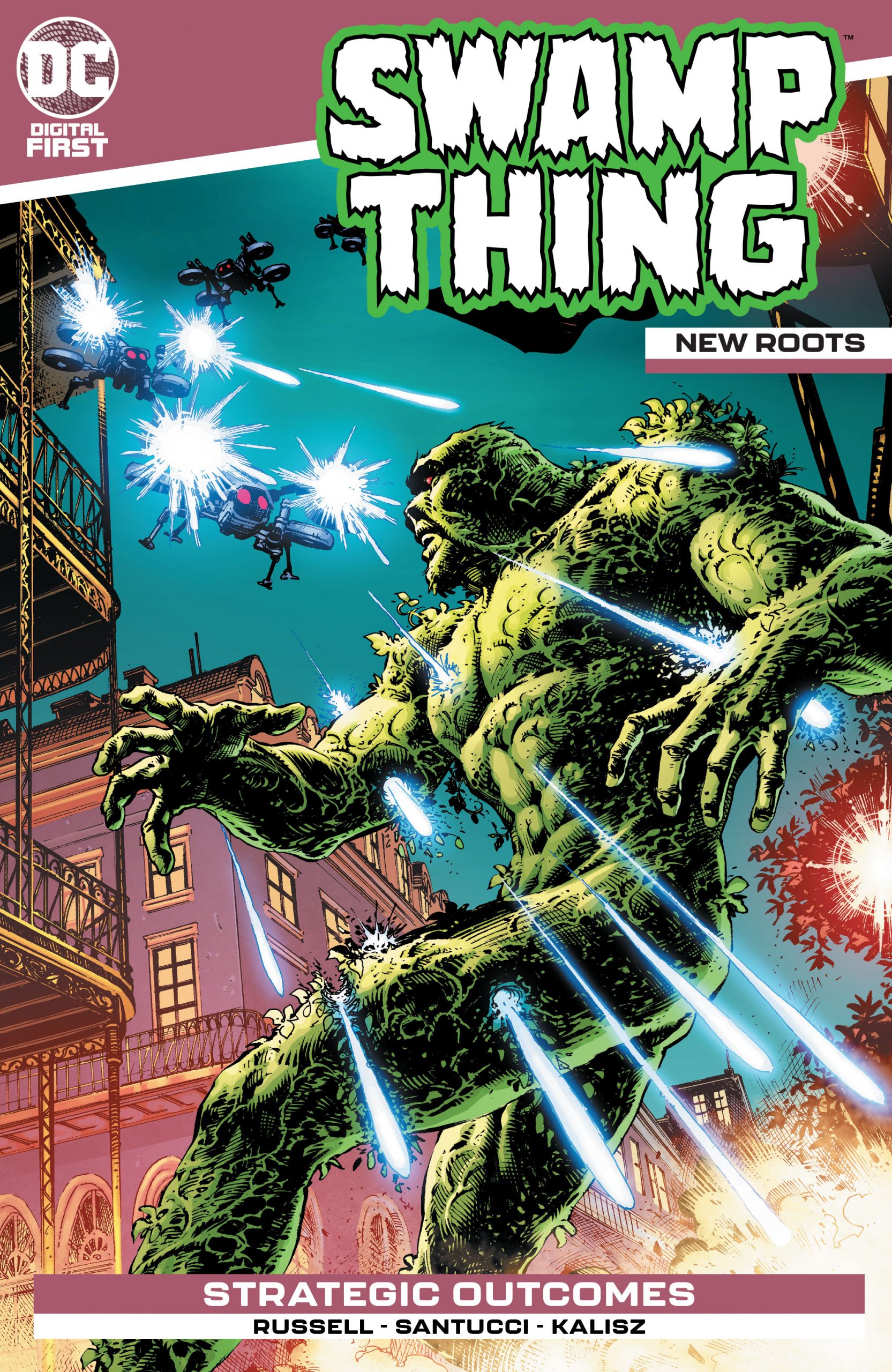 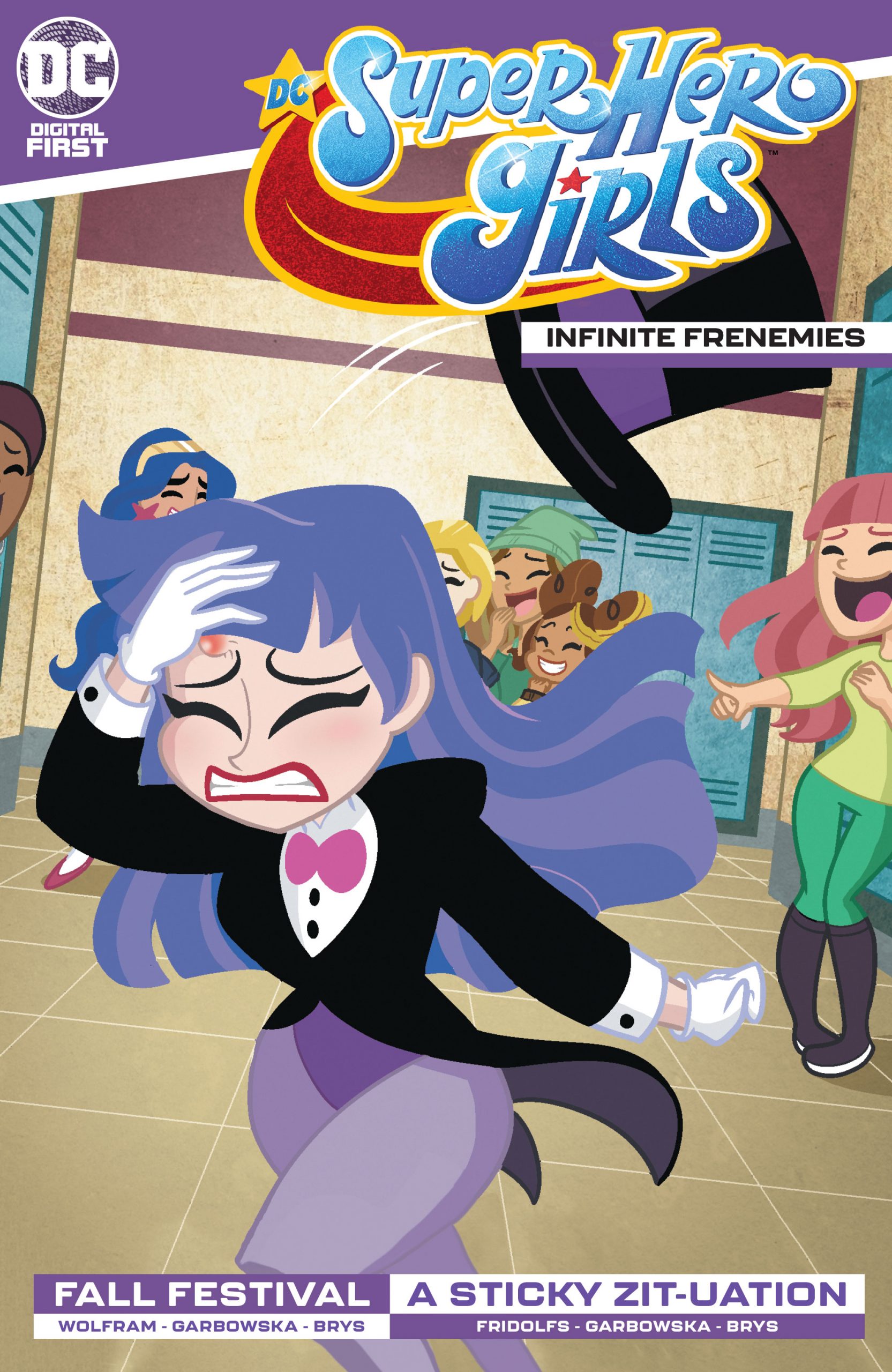 The girls are excited about this year’s Fall Festival, but Harley Quinn has other plans! Will Bumblebee be able to stop her and keep the pumpkinsfrom flying?

Zatanna learns that magic isn’t always the solution for everything—especially when that thing is bright red and in the middle of your forehead!

At Sunderland’s request, the U.S. military is testing ways to annihilate the monstrous threat known as the Swamp Thing. From swamp to city they’ll hunt him, and while their target tries to keep the innocent from becoming collateral damage, the same can’t be said of his pursuers…

Batman is hot on the trail of a series of murders in Brazil, where government officials and various captains of industry have been mysteriously murdered by their own bodyguards. None of the assailants knew each other, but the Bodyguard Murders story went viral. As the Dark Knight starts assembling the pieces of the puzzle, he notices the things all these victims have in common are a connection to the logging industry, a penchant for bribes…and a woman who goes by the name POISON IVY.

The Toyman is loose in Metropolis, and he has his sights set on one man: LEX LUTHOR! Can Superman get to the bottom of Toyman’s assault on Lex, or will the villain’s terrifying toys take down LexCorp-and Metropolis with it?

Wonder Woman thinks she’s saved the day when she stops an asteroid from crashing into the Earth-but a fragment of it lands near the shores of Gorilla City, unleashing an alien horror upon the unsuspecting simians. Now the Amazing Amazon must stop the creature before the entire gorilla race is destroyed!

Aquaman and Tempest race to stop an enraged monster that has escaped its magical tomb under the city of New York.

“The Accelerated and the Infinitesimal” by Gail Simone, Clayton Henry, Marcelo Maiolo and Rob Leigh

Temporal travesties are wreaking havoc on the streets of Central City, and the Flash needs an extra pair of hands to keep the city safe-he just didn’t realize how tiny those hands would be!

“Gone to the Dogs” by Amanda Deibert, Erich Owen and Gabriela Downie

Jessica hopes her dog adoption fair will help some adorable pups find loving homes, but Catwoman plans to help herself! And when someone special catches Star Sapphire’s eye, will her jealous rampage ruin the day…or be the key to saving it?

Word has gotten out about the existence of Swamp Thing—and now tourists are swarming the swamp looking for a glimpse of the bigfoot of the bayou. The sudden popularity only accelerates Sunderland Corporation’s plans to destroy him, but Swamp Thing finds help from an unexpected quarter…whether he wants it or not.

It’s a mad dash as Batman races to stop a murderous plan—but when the villain is revealed to be in two places at once, and the victim turns out to be not so innocent, Batman must make the ultimate choice in a fight against Clayface.

Monday: Superman: The Man of Tomorrow #2

Someone is running bets on Superman’s exploits throughout Metropolis and putting ordinary citizens in harm’s way. Can Superman locate this villainous gambler in time or will the house take all?!

Wonder Woman must rescue Lois Lane on an expedition to the treacherous mountain K2! Lois is hot on the trail of a missing group of female climbers who are hoping to conquer the peak. But what dangers lurk in k2’s snow-covered caverns—and can Princess Diana keep the Daily Planet’s intrepid reporter safe?

Aquaman and the Sea Devils team up to stop a group of polluters—and a radioactive creature from the deep!

A time-traveling soldier arrives in Central City and her mission is to kill the Fastest Man Alive! But what is it that the Flash did (or will do) to destroy her world—and is there a way he can prevent it without dying?

“Panicked at the Disco” by Amanda Deibert, Erich Owen and Gabriela Downie

It’s time for the greatest teenage tradition of them all: the school formal! But when Livewire attacks and sets everyone’s toes a-tapping, the girls will have to put on their dancing shoes to save the day!

Swamp Thing scours the bayou when an old friend goes missing, but all the while, an unexpected enemy is coming for Swamp Thing himself…

To save a friend from seemingly insurmountable odds, the Dark Knight Detective must summon every ounce of his skill and bravery! This tale is based on the true story of U.S. Army Specialist Salvatore A. Giunta, who was awarded the Medal of Honor for his service in Afghanistan—the first living soldier to receive that honor since the Vietnam War.

Katherine Kane has worked hard to establish herself as one of Gotham’s most intelligent and strategically cunning vigilantes. But before she was Batwoman, she was a West Point cadet—and when she gets drafted into a covert mission as brigade XO, she’ll need every bit of training that the Army gave her!

Monday: Superman: The Man of Tomorrow #1

Metropolis, the City of Tomorrow, is plunged into a blackout. Superman needs to find the cause of the crisis but is he prepared to face the energy-hungry Parasite?

During a run-in with a villainous crime syndicate, Wonder Woman learns about a hit list whose biggest target is a familiar name—Harley Quinn! Can the Champion of Paradise Island track down the Clown Princess of Crime before it’s too late?

Take a vacation to rest and recuperate, but their relaxation is cut short when their cruise ship is attached by King Shark! Can the Fastest Man Alive save a sinking ship when there’s no land in sight—or will he be fish food?

Kara is excited to have a whole weekend to herself to get up to all kinds of moshing mayhem, but the other girls keep interrupting her “me time.” When Kara’s wish for solitude comes true as one by one the girls become obsessed with a new app that was just released, it’s up to Supergirl to save Metropolis—and the girls—on her own!

“The Beet Goes On” by Mark Russell, Marco Santucci, John Kalisz and Jimmy B.

The Sunderland Corporation has a new plan to trap and exploit Swamp Thing. With enemies surrounding him, who can Swamp Thing trust?

These sound so great. Which ones will you be picking up? Let us know.