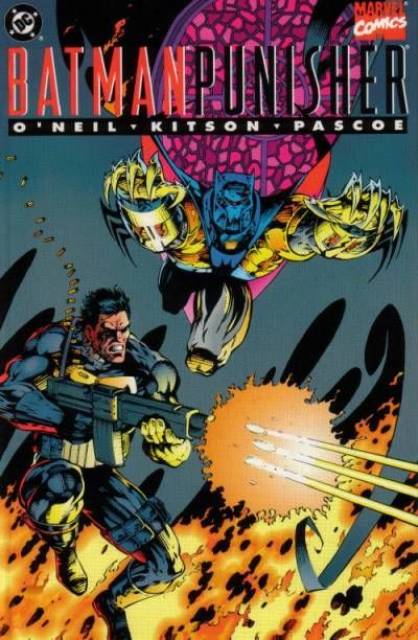 In 1994, Marvel and DC Comics released two Batman/Punisher crossovers. One of them featured the Punisher battling Batman/Azrael and the second with Castle facing Batman/Bruce Wayne.

I hate Gotham… but I had to come back here!

Probably the most confusing thing for the Punisher is that he thinks that Batman is quite the Bi-Polar Sociopath, as he deals with two different Batman personas with different visions of how the Dark Knight should operate.

In Batman/Punisher: Lake of Fire, New York City is the venue where Azrael (Jean Paul Valley) finds himself after chasing a hideous criminal named Jigsaw. At this time, Azrael has taken up the mantle of the bat after Bruce’s back was broken by Bane (Knightfall). However, the Punisher (Frank Castle) stands in his way, as he wants to kill Jigsaw first.

The trail leads Punisher into “one of the few places worse than New York City” – Gotham. There, Jigsaw has hatched a plan to foul the city reservoirs with rocket fuel. Once ignited, the water itself will burn, transforming the reservoirs into a lake of fire.

When Gotham needs someone to repair the damage, the only construction company that can do the job will be the one in which Jigsaw owns a controlling interest. To stop this from happening, the Punisher, a notorious loner, must cooperate with Azrael/Batman. 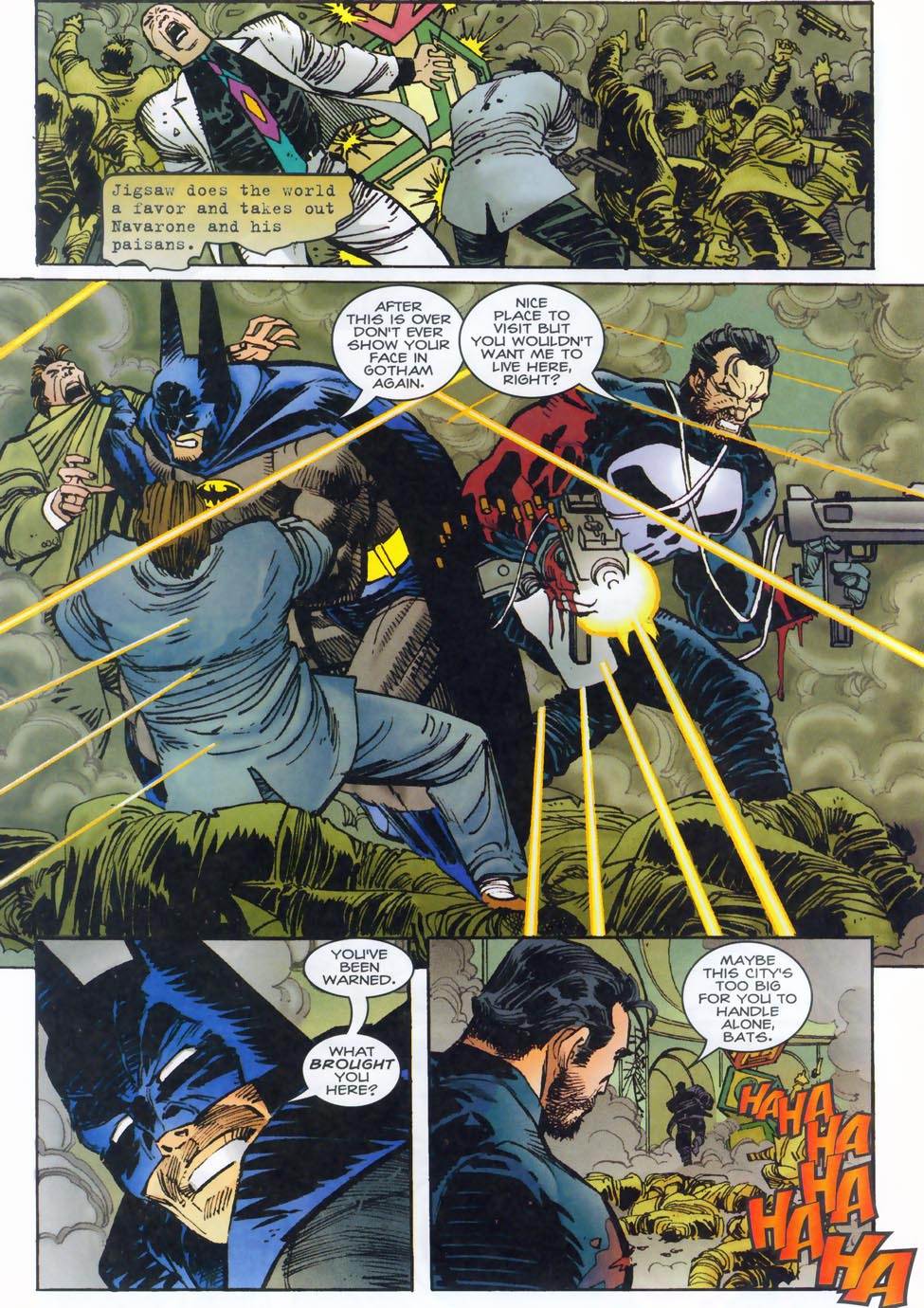 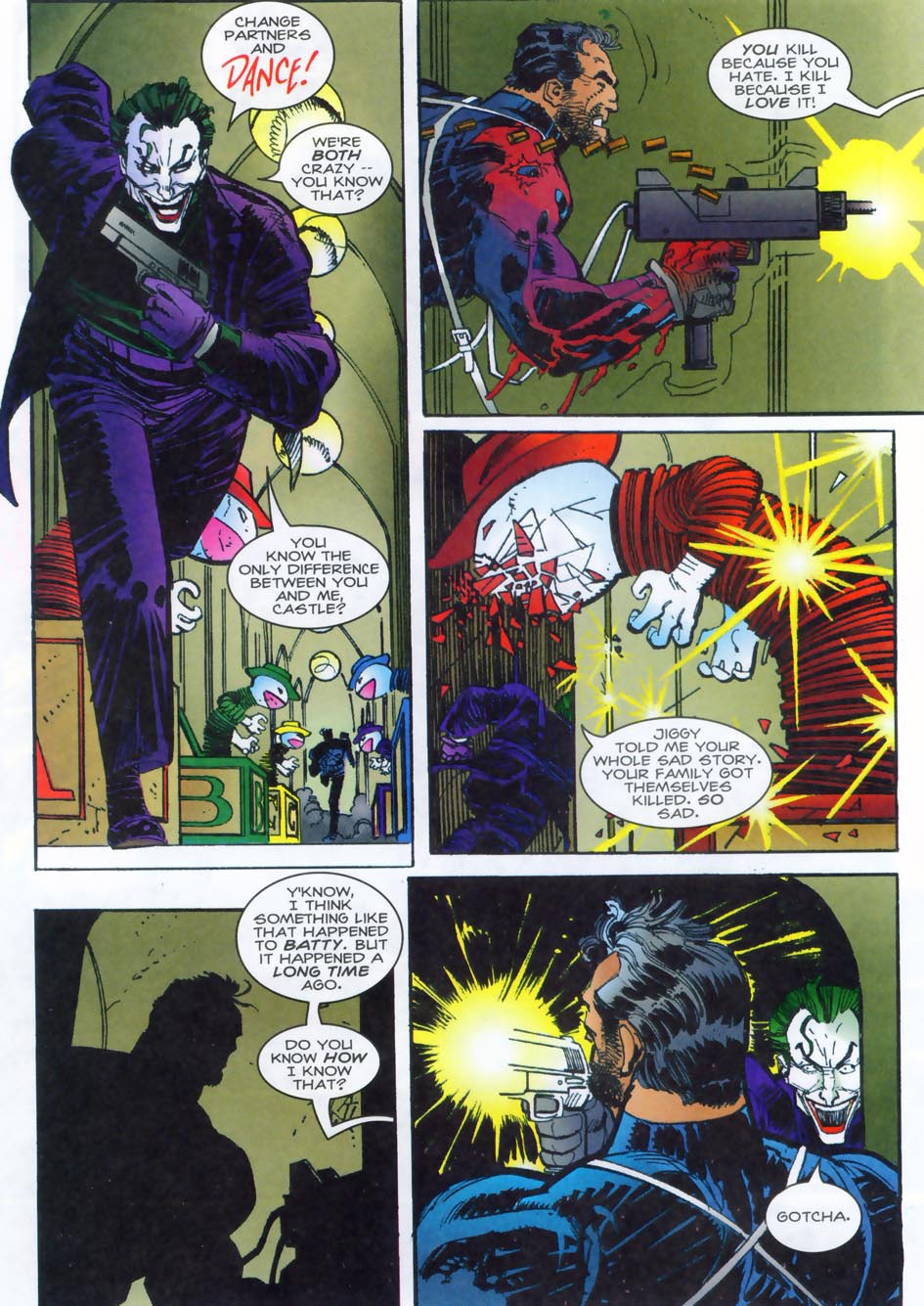 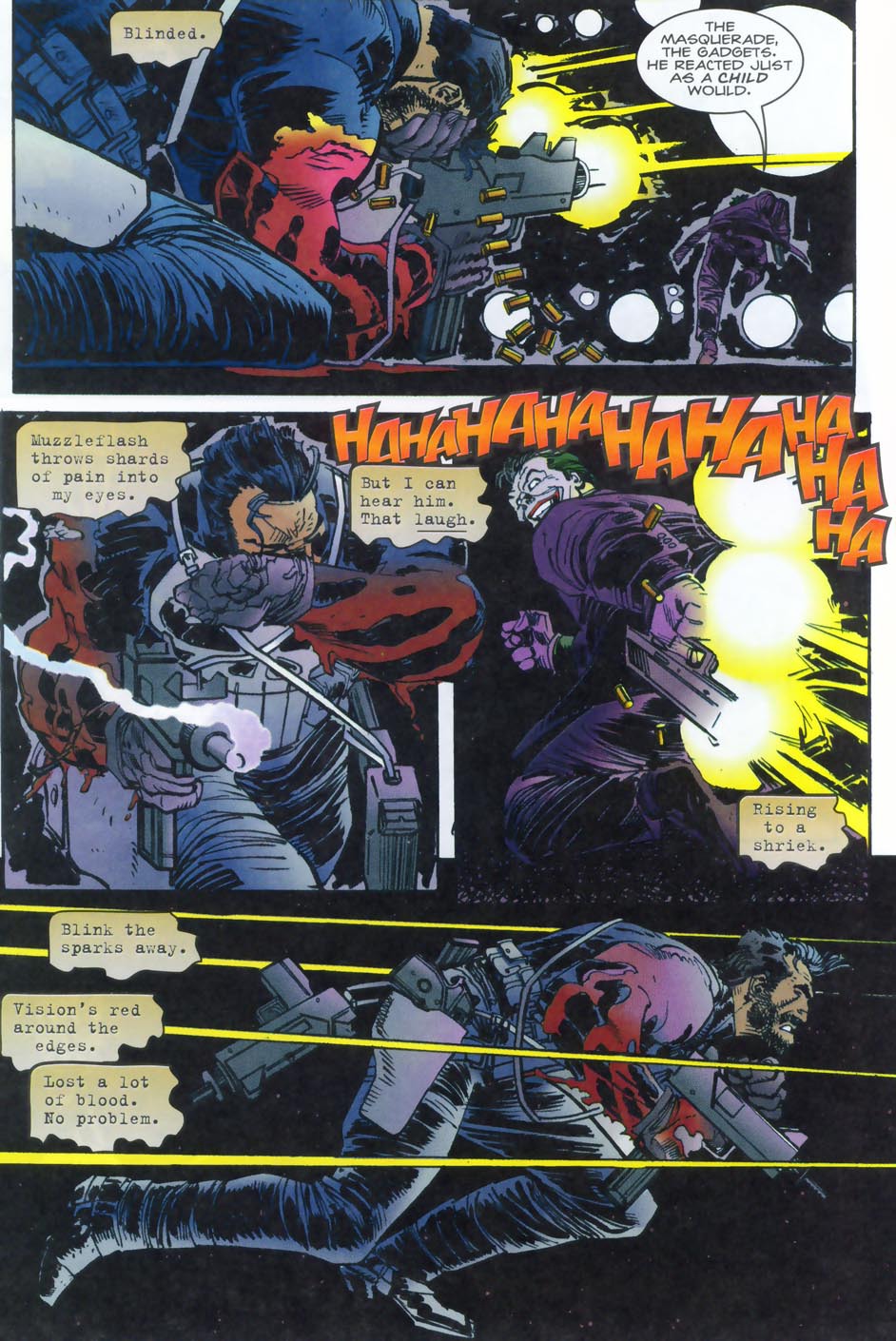 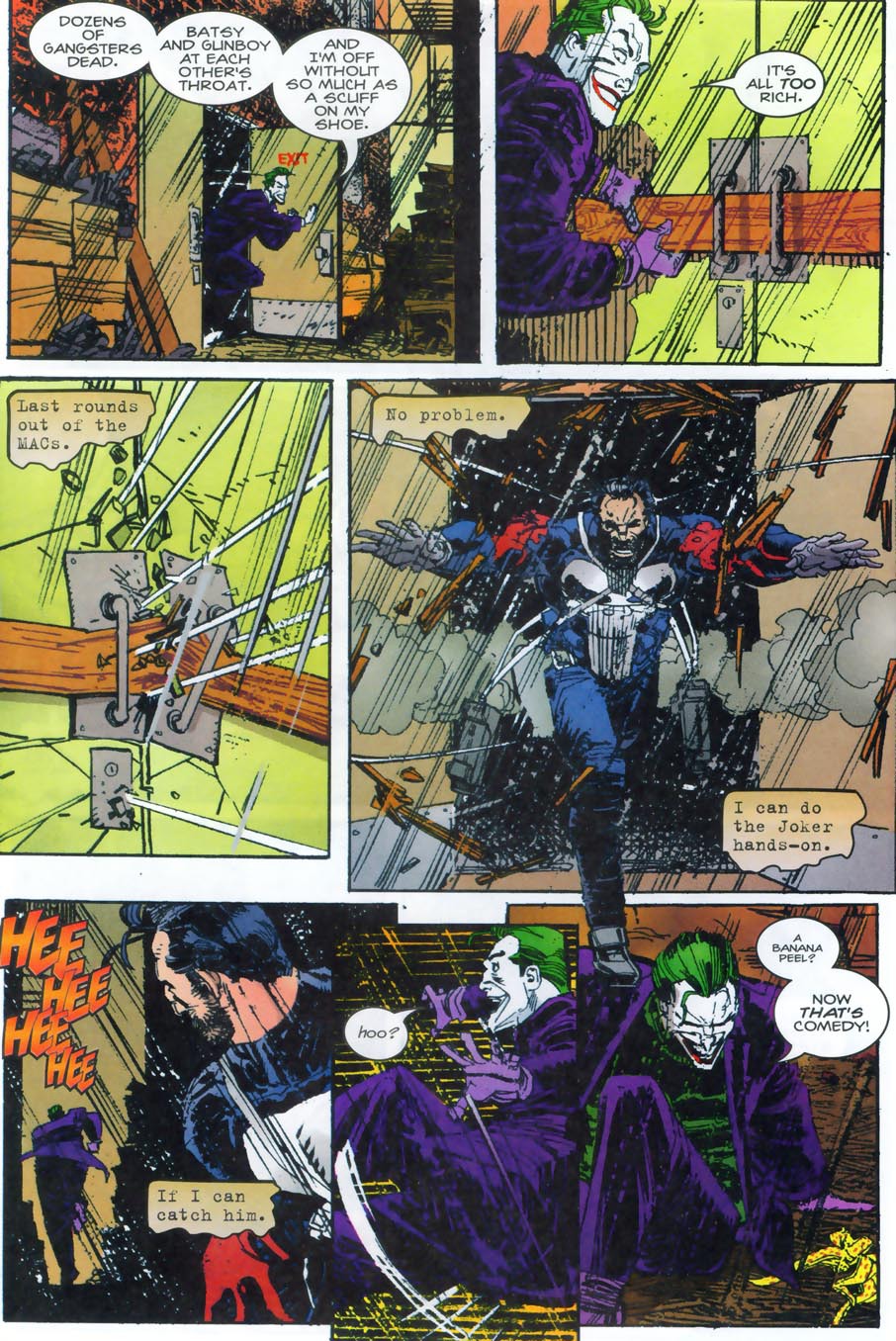 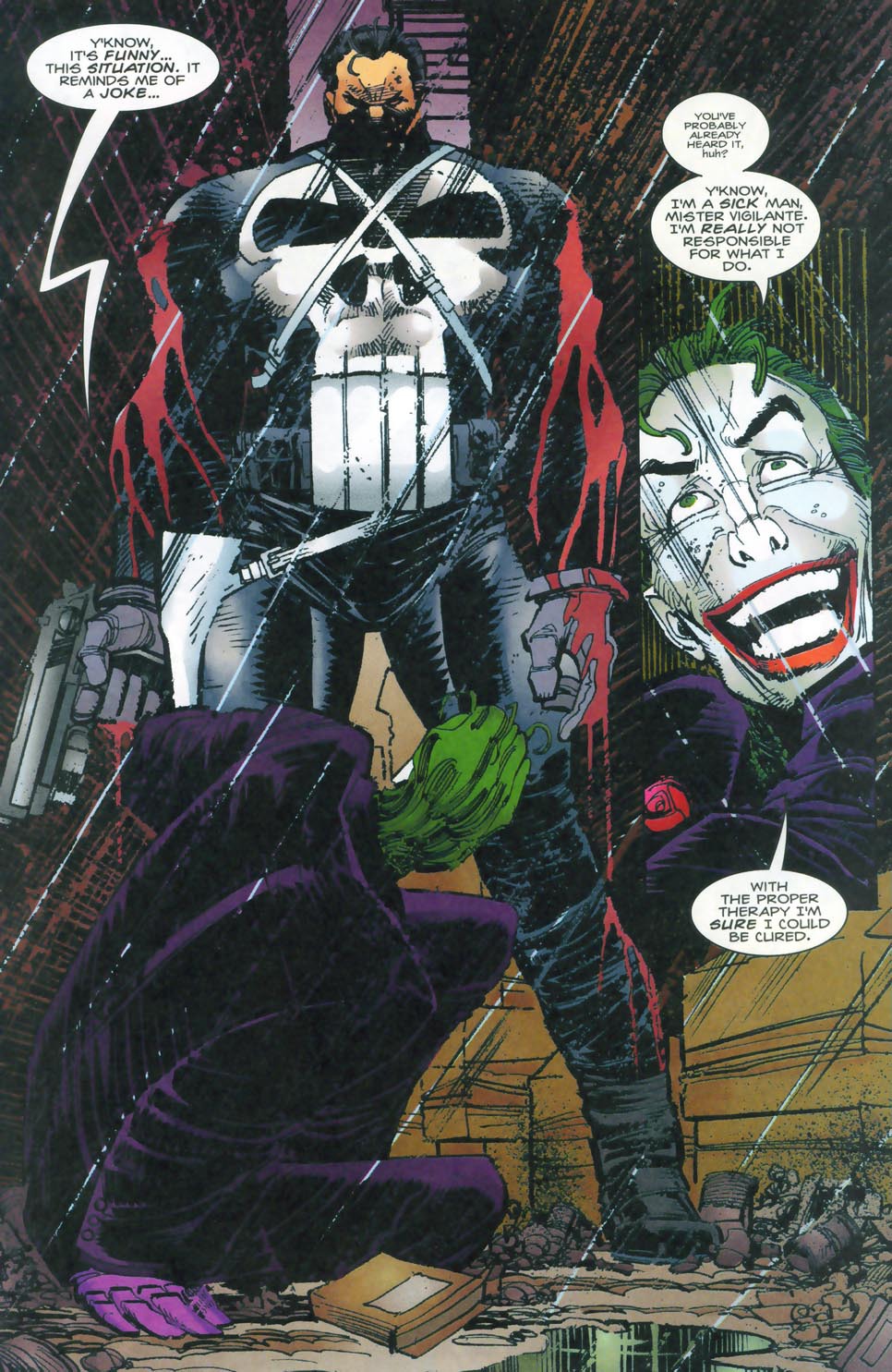 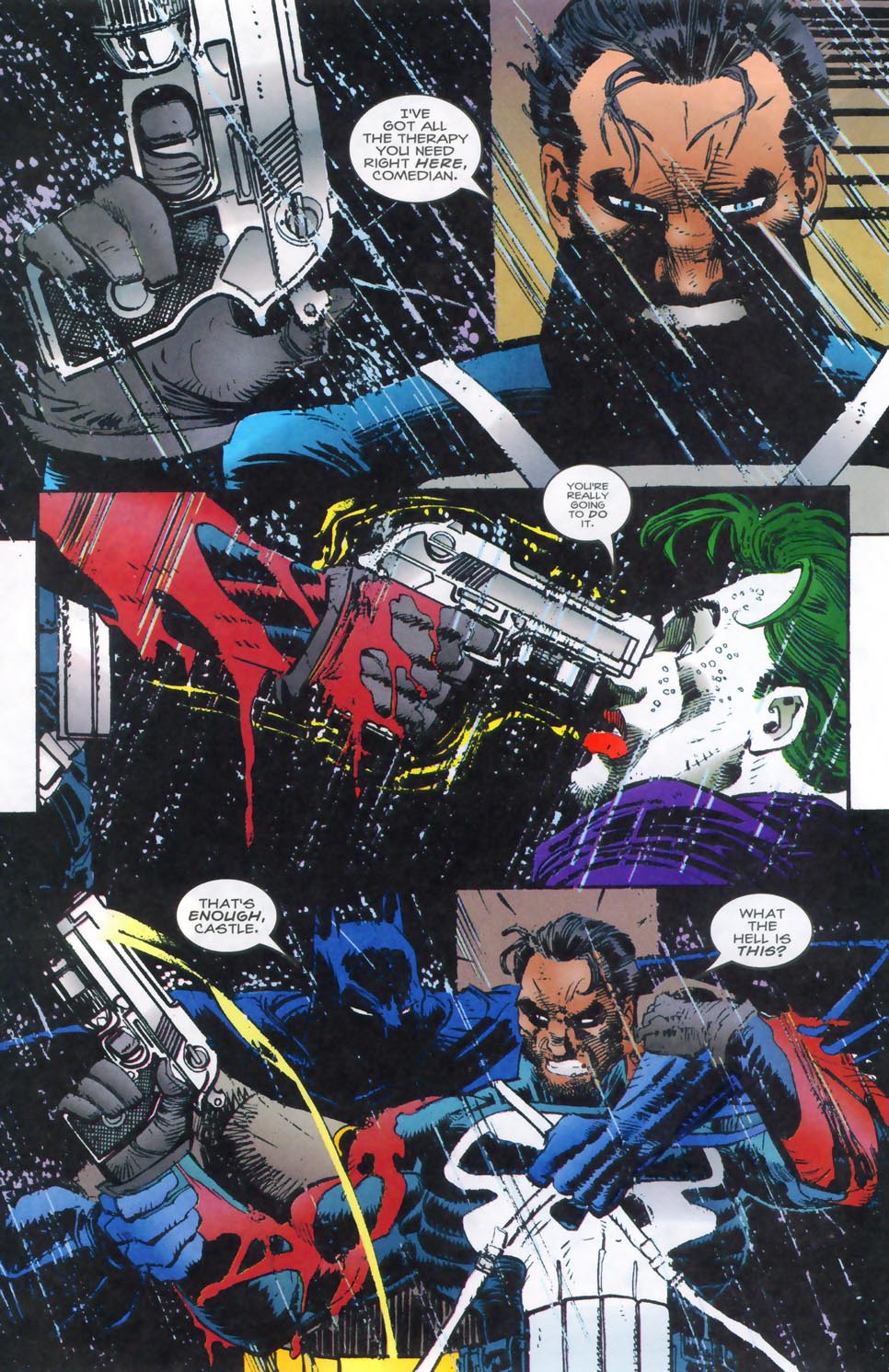 In October of 1994, the second Batman/Punisher book, Punisher/Batman: Deadly Knights picked up a few months after Lake of Fire, the Punisher finds himself back in Gotham. Commissioner Gordon and his force watch Punisher in a firefight with local street thugs from afar. Castle whittles down the thugs until he has one left to interrogate in his search for Jigsaw.

Batman gets involved, attacking the Punisher and allowing the thug to get away. Batman knows a bit about the Punisher from a distance (since Jean-Paul was wearing the mantle the last time Punisher came to Gotham), but Punisher doesn’t know he is facing a different person under the cowl. Castle thinks the Batman is truly someone mentally ill who changes his fighting style and personality easily.

Despite Batman’s grudging acknowledgement they’re both on the same case, the Dark Knight does not want Punisher’s death-dealing vigilantism in his town, so he commits to driving the Punisher out of Gotham for good.

Punisher escapes in the wreckage during their brawl, leaving Batman to work out what brought Punisher to Gotham in the first place, knowing the Punisher will be there sooner or later. So it begins… all of this, and Joker too!

Getting both comics in a short time span really gave the fans a perspective that was unique at the time. Jean Paul Valley had assumed the Mantle of the Bat, and by doing so, his methods were as grim as The Punisher’s. In fact, one would think that this was the gritty Dynamic Duo we were looking for at the time to take care of Bane, and whatever other villain could be cooked up.

However, fans were given a bit of a moral code back when Bruce returned for the second pairing. To think that the Punisher really thought that Gotham was more of a cesspool for crime than Marvel’s version of New York City was also an eye-opener. Again though, Gotham was the venue of choice for both comics.

What Was Scott Snyder Thinking? 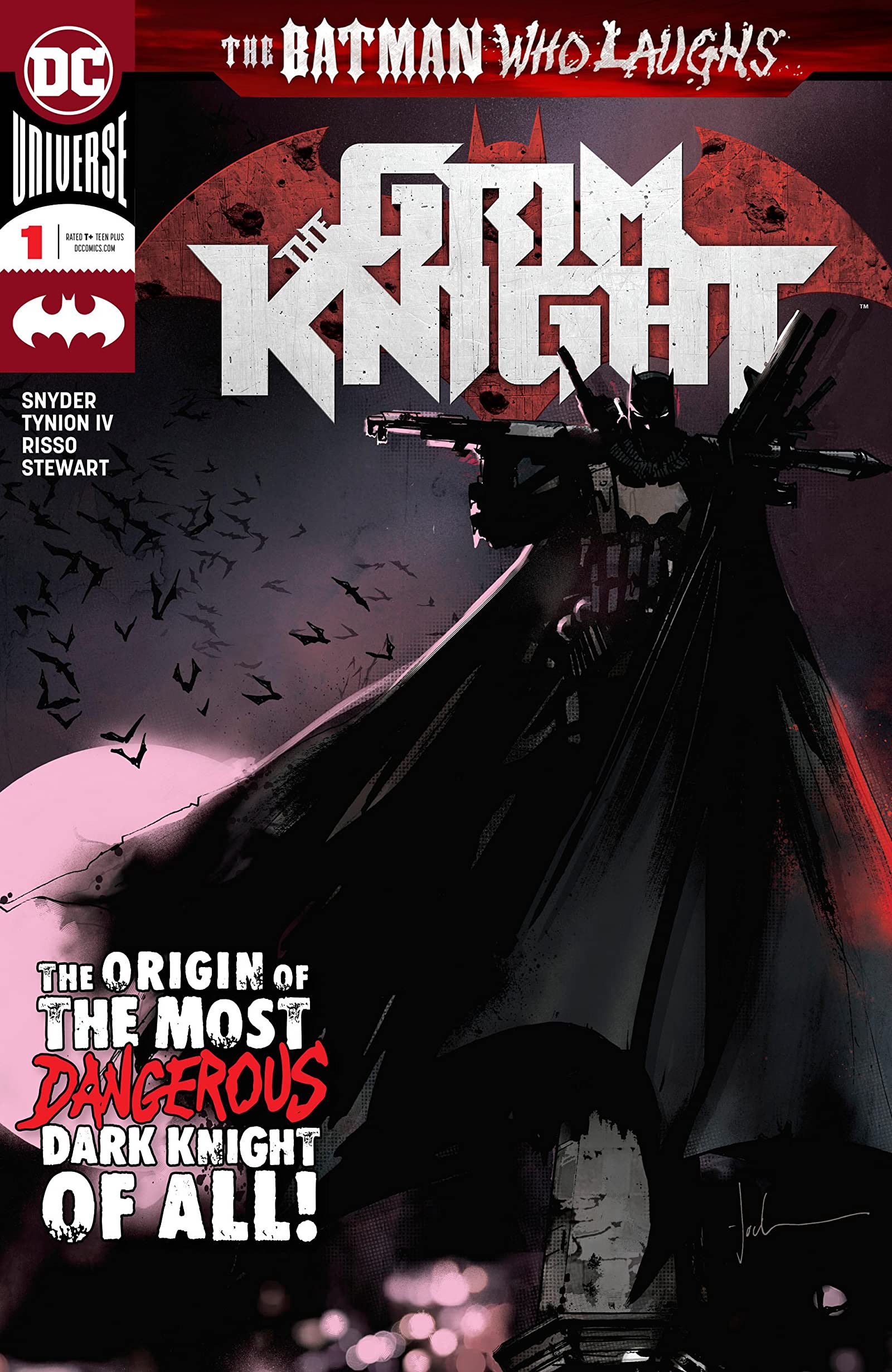 Remember that Scott Snyder, the hot-hand that gave us The Batman Who Laughs and The Grim Knight, was a teenager in 1994. I would love to ask him if his Grim Knight was a product of reading these two one-shot stories? Only Snyder can answer that one, but if you read this one-shot issue along with having followed the Grim Knight in The Batman Who Laughs series, you definitely see where Batman and The Punisher have intertwined.

Revisiting the  Lake of Fire project was quite a stroke of genius for readers to get the first “team-up” of vigilantes between Azrael and Frank Castle as their measures in dealing with criminals are quite similar. Though Castles motivation is one of anger, Azrael’s is one of a mission from God.  Both deal out some Old Testament beatings to the criminal element…”eye for an eye” stuff. 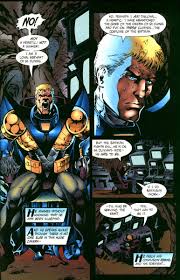 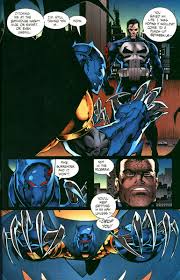 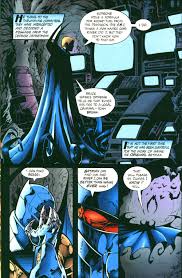 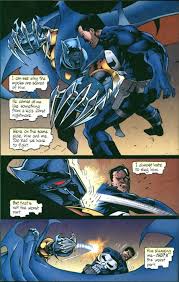 I guess the next chapter is for Azrael to meet Spawn. Hey…it could happen!

Bruce Wayne depicts the softer side of vigilantism… or does he?

The Joker Tilts the Scale… But Doesn’t He Always?

Of the two books, Deadly Knights features the Joker. What a great confrontation between Castle and the Clown Prince of Crime! Does he beg for his life? Does Castle recognize something in Joker that’s similar to himself? Are they both “sick”, or simply “violent” in their own way? This book warrants a visit for this dynamic alone.

My inaugural travel through time was with Batman and Spawn of Image comics. I then went on to explore the pairing of Batman and Daredevil. While Batman writers have allowed him to “beat” Captain America and even the Incredible Hulk (turns out a blow to the solar plexus paired with some gassy fumes can take the Green Giant down), I wanted to provide a further glimpse of how Batman can operate within the Marvel and DC universes.

I’m constantly looking at other places where I might have missed exchanges between Batman and other realities. Given the recent events with COVID-19 and print issues being on hiatus, it would sure be great that when the comic world returns to normal to get more Batman crossovers.

Again, I’m banking on an amalgamation that we’ve never seen before. I’d really like to see what Scott Snyder could do with a Punisher/Joker story… or when the Scarecrows of both the DC and Marvel universes combine to…. well, you get the picture!