Joker isn’t the only one who will be busy in April. Following on from the news that the 80th anniversary 100-page Joker special will be released in April, Batman’s going to have a busy month too. We have a first look at what the Dark Knight will be up to in Batman and Detective Comics.

Below is the full press release:

April is Open Season on The Batman!

The Designer Pulls off the Ultimate Heist in Gotham City!

Two-Face Goes for His Final Revenge Against the Dark Knight! 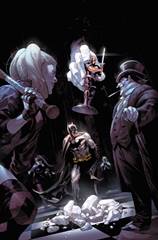 Yes, April is tax season, and that’s no fun for anybody. But if you think you have it bad, just be glad you’re not Batman! Although Bruce Wayne may have the best tax accountants in Gotham City, but for Batman, keeping the I.R.S. out of his Bat-wallet is the least of his problems!

On April 1, writer James Tynion IV and artist Guillem March make sure that the action is no joke as Gotham’s newest villain the Designer plans the biggest heist in Gotham City! The Dark Knight knows what must be done to stop this plot, but in order to do so he has to escape the most ingenious death trap ever created by that prince of puzzles, the Riddler! 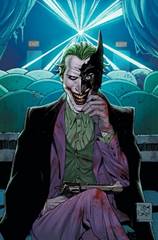 This issue will ship with two covers.

The action continues April 15 (Tax Day, boo!!) with the conclusion to Tynion and March’s debut story arc as Batman faces off against the Designer in the climactic finish to “Their Dark Designs.”

Batman has lost more than he could have imagined, and now he faces a cost so dear it will change the course of his life.

And there is worse on the horizon. Amidst of all the horror, the Dark Knight can feel the drumbeat of battle. “Joker War” is coming, and Gotham City will never be the same. 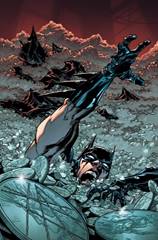 And the hurts just keep on coming on April 22, in the pages of Detective Comics #1022! Writer Peter J. Tomasi and artist Brad Walker continue to put Batman through the wringer as “Ugly Heart” hits part three!

Batman has been blasted with bullets and left for dead by Two-Face’s deadly Church of the Two—and if Gotham City is going to survive Two- Face’s final revenge, they’re going to need a miracle! But be careful what you wish for, because a resurrection is already in prog­ress, and this one involves a certain Clown Prince and the heir to Gotham’s vigilante throne…

Will you be keeping up with the Dark Knight’s adventures in Batman and Detective Comics, during his busy first full month of Spring? Let us know!