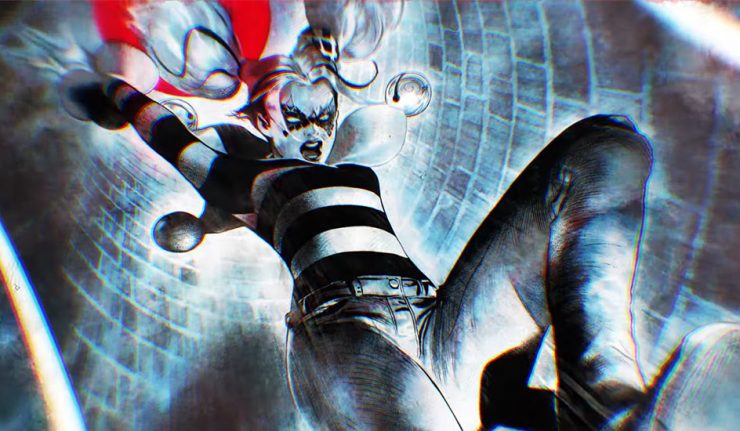 Last year, DC unveiled plans to expand their demographic. The objective was to take their beloved characters and retool them for younger audiences. DC Zoom would target kids in middle/junior high school while DC Ink would focus on teenagers. Back in June of last year, of the list of announced titles, one particular book caught my eye. The story of interest to Batfans is entitled, Harley Quinn: Breaking Glass. It is coming-of-age tale written by Mariko Tamaki, with art by Steve Pugh. With the release date nearing, we’ve got a first look trailer for you.

Harley Quinn: Breaking Glass is a coming-of-age story about choices, consequences, justice, fairness, and progress and how a weird kid from Gotham’s poorest part of town goes about defining her world for herself. From Eisner Award and Caldecott Honor-winning author Mariko Tamaki (This One Summer, Supergirl: Being Super).

Harleen is a tough, outspoken, rebellious kid who lives in a ramshackle apartment above a karaoke cabaret owned by a drag queen named MAMA. Ever since Harleen’s parents split, MAMA has been her only family. When the cabaret becomes the next victim in the wave of gentrification that’s taking over the neighborhood, Harleen gets mad.

When Harleen decides to turn her anger into action, she is faced with two choices: join Ivy, who’s campaigning to make the neighborhood a better place to live, or join The Joker, who plans to take down Gotham one corporation at a time. Harley Quinn: Breaking Glass is at once a tale of the classic Harley readers know and love, and a heartfelt story about the choices teenagers make and how they can define–or destroy–their lives.

Her two great loves. Which will she pick?

The setting of the book is obviously different from what we know. Like the demographic they are trying to reach, Harleen is a teenager in high school. However, it feels her personality will still be intact. The synopsis also indicates that Harleen will have a choice between her comic book counterpart’s two most significant relationships: Ivy and Joker. I really like that it helps to push the toxicity of the Harley/Joker relationship that so many misinformed fans seem to idolize. It also normalizes Harley’s same-sex relationship with Ivy.

Anyway, take a look at this frenetic first look trailer:

In case you didn’t notice, The Joker’s wrapped in bandages. This indicates that this is quite early in his tenure, likely not too after being bleached. The art by Pugh is unsurprisingly gorgeous and Tamaki’s story is very characteristic of Harley… just less comic-booky. Because we all know Harley isn’t particularly altruistic, giving her some motivation that directly benefits herself or her loved ones is the correct path.