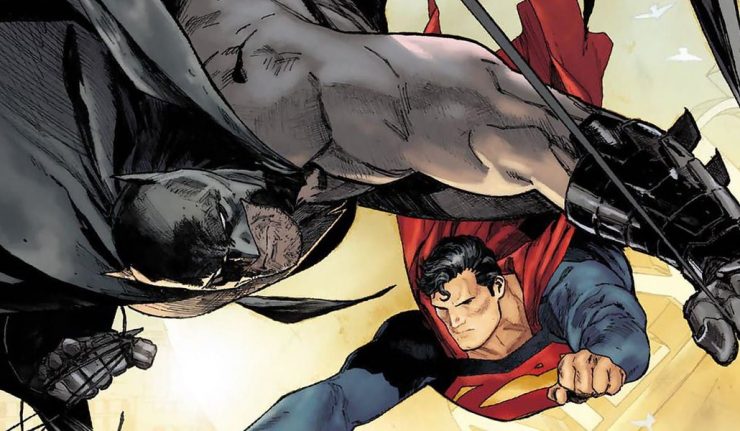 Batman/Superman writer Joshua Williamson has taken to Twitter to share a sneak peak at the upcoming series. With #1 due out in August, Williamson has picked the perfect time to whet our appetites.

The series will see the writer team up with David Marquez and Alejandro Sánchez. Interestingly the images show yet another team up, with someone very familiar…

A panel from Batman/Superman #1. By @DaveMarquez & @loquesunalex! The first issue comes out in August. So many of the pages in this series give away some of the big crazy plans we have for the DCU that we can't show a lot…yet…soon… pic.twitter.com/kwZLMyHg69

It’s everyone’s favourite police Commissioner, James Gordon! Jim’s full involvement in the story is as yet unknown, but the image certainly offers a unique twist to the usual Batman/Gordon meetings.

Definitely a lot to get excited about, especially as we already know it ties directly in the Year of the villain arc and will feature the Batman Who Laughs.

BATMAN/SUPERMAN #1 comes out in AUGUST! This image breaks into two covers both by @DaveMarquez & @loquesunalex! This new series is an crucial piece of the mega story we're telling in the DCU during Year of the Villain, be sure to let your local comic shop know you want it! pic.twitter.com/yAX6brnMUY

Are you excited about Joshua Williamson taking on DC Comics’ most iconic characters? We certainly are. Will you be picking up Batman/Superman? Let us know.