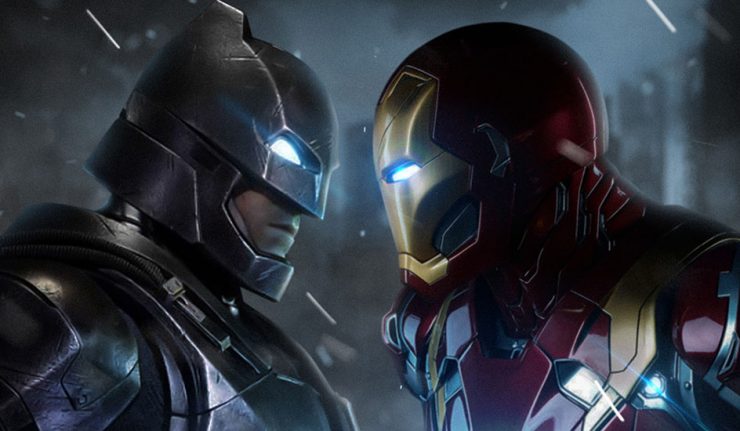 As most comic book fans know, between the two big comic book companies there are oftentimes counterparts that share similar traits. It’s mostly because they were borrowing ideas from one another during the birth of these characters. However, you could also say that it’s because some great ideas are just worth reusing… or are just blatant ripoffs. The most obvious ones are Green Arrow and Hawkeye, two archers both with insane accuracy and trick arrows in their quivers. There are others who are a little more difficult to pinpoint. For instance, Batman to me has a few probable counterparts in Marvel’s camp. I personally consider Black Panther a good rival for the Dark Knight for his animal theme, dark suit, and martial arts skills. Most people, however, see Batman’s foil as Iron Man. Both are brilliant billionaires who use their money to outfit themselves with tools to fight crime. (I obviously disagree as Bruce Wayne is still a formidable opponent without his suit, while Tony Stark is not.)

Comic book fans love crossovers and we’d love the outcome of a brawl between the two billionaire geniuses, right? Well, one fan by the name of Billy Crammer took his editing skills to gift the world with a pretty cool little video. Armed with footage from the DC movie universe and the MCU, he gave us a cool look at how these two would engage in fisticuffs.

It seems most of the Batfleck’s footage is taken from the fight between Supes and Bats in BvS. A good majority of Iron Man’s scenes come from his first encounter with Thor and Cap in the first Avengers. Later on in the video, some scenes from his final bout with Cap in Captain America: Civil War are utilized. It’s a pretty thrilling and epic fight sequence. I love that he kept the fight fairly equal with an ambiguous ending left to our interpretation. It also helped me realize how much Batfleck grunted all throughout that fight scene. Someone should do a super-cut of all those pained grunts. It’d make me laugh. Please and thank you.

Realistically speaking, if the two were to engage in a random fight, Batman would have too much trouble with Tony’s suit. Batman’s arsenal would likely be too limited to handle what Tony is dishing out. I’d say that Batman would last fairly long, evading and studying Tony’s suit from a distance before escaping to find a solution. However, if that was not an option, Iron Man’s suit of mass destruction would likely take Batman down. We all know that if the Dark Knight had some time to study and prepare a strategy to combat Iron Man, Tony would be toast.

What do you think? How do you think a fight would play out between these two rich boys? Let me know.