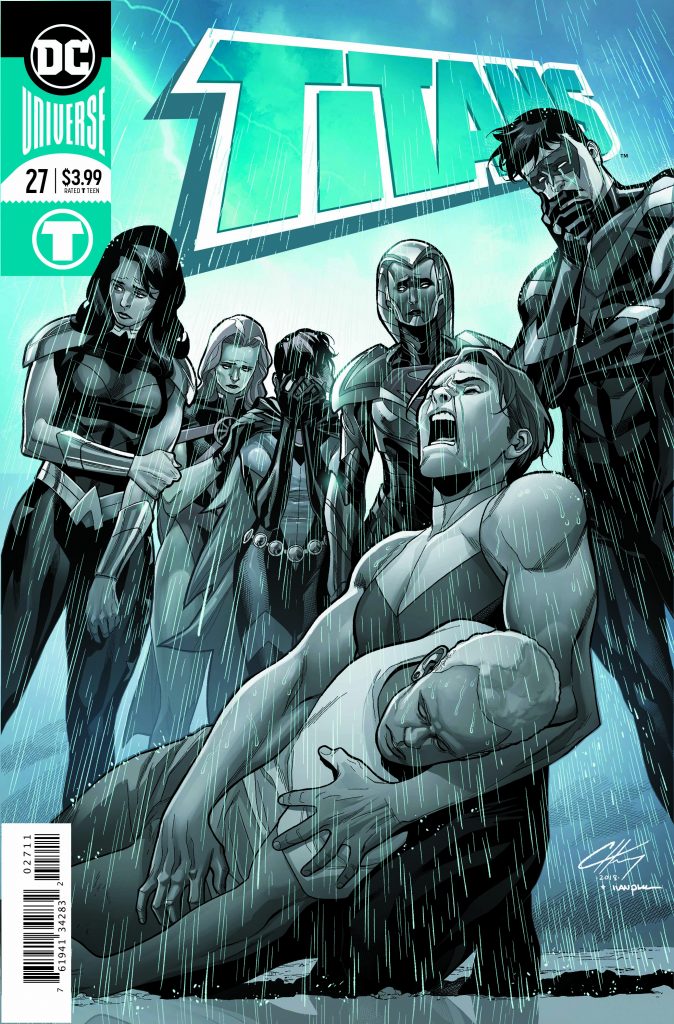 Rarely do characters impact an issue without making an actual appearance, but we’re not talking about any characters. Here in Titans #27, it’s Roy Harper and Dick Grayson. The issue was especially poignant, particularly for long-time fans of Teen Titans. It looked back while moving the story forward in compelling ways.

The opening panels of the issue showed Donna Troy visiting the fresh grave of Roy Harper, her former teammate, and love. Roy was murdered in Heroes in Crisis #1. The death of Donna’s former flame has left her to drown her sorrows in tequila. Additionally, readers were shocked by the final panels of Batman #55 where Dick Grayson was left in critical condition, clinging to life after taking a bullet to the head. Consequently, the Titans were reeling as news of Nightwing’s injury reached them in Titans #27…

Dick Grayson is a classic character of the highest order. From his debut the pages of Detective Comics #38 (April 1940), Dick Grayson has been the original “Robin, The Boy Wonder.” For 78 years, he’s been the first side-kick and founding Teen Titan since February 1966. The classic Teen Titans line-up from February of 1966 consisted of Grayson as Robin, Aqualad, Kid Flash (Wally West) and Wonder Girl (Donna Troy). Dick ditched the Robin moniker and became Nightwing in Tales of the Teen Titans #44 (July 1984). For 78 years, Dick Grayson has always been a fan favorite and part of our culture.

Likewise, Roy Harper is a staple at DC Comics. He made his first appearance as “Speedy,” the youthful sidekick of Green Arrow, in More Fun Comics #73 in November 1941. Roy joined the original Teen Titans in Teen Titans #4, Aug 1966. Speedy made front-page news in 1971 through an iconic tale of battling drug addiction in the pages of Green Lantern/Green Arrow #85-86. With multiple name changes, storylines, flaws and victories, Roy Harper has always been a dynamic and well loved character. 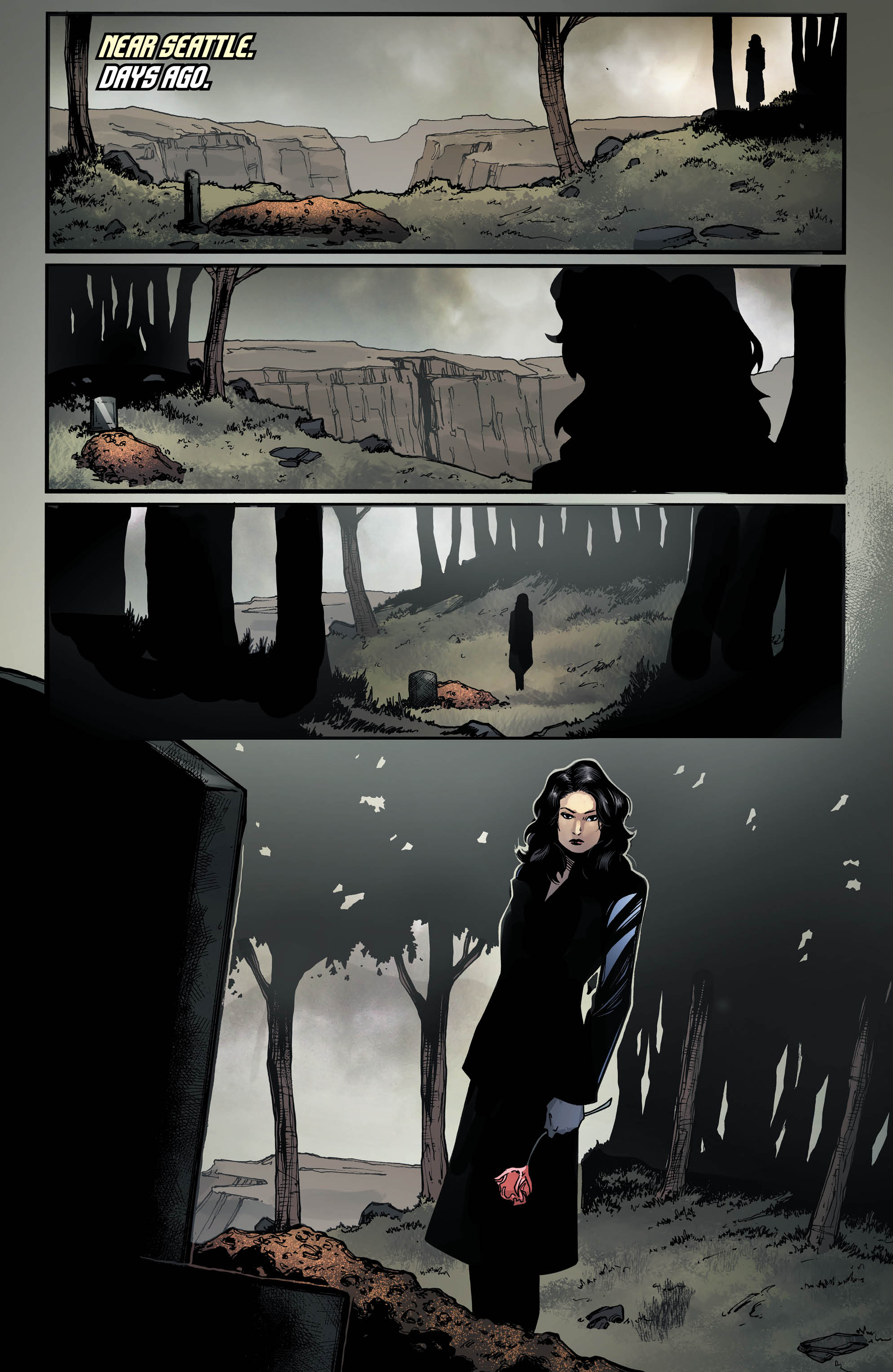 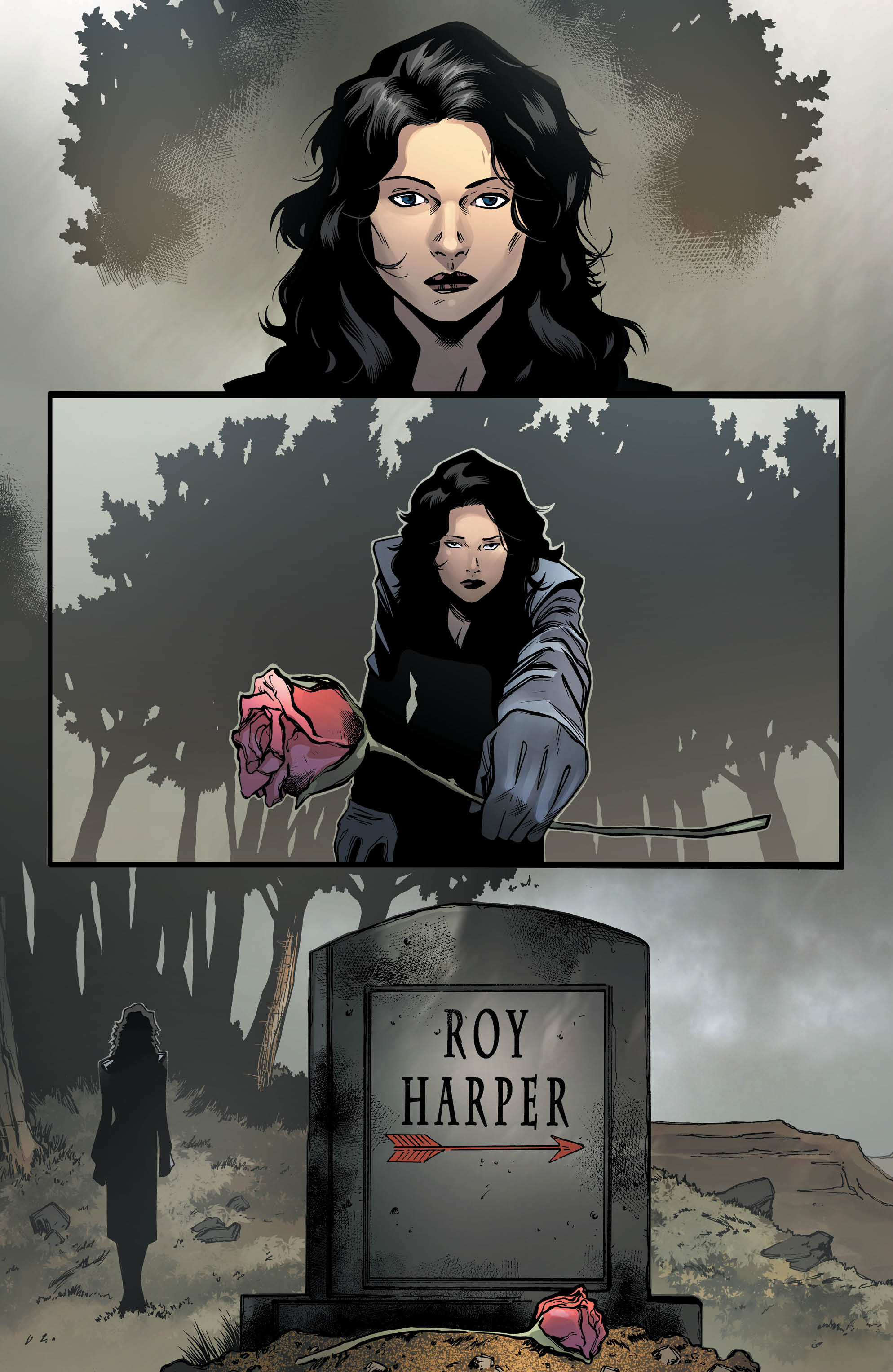 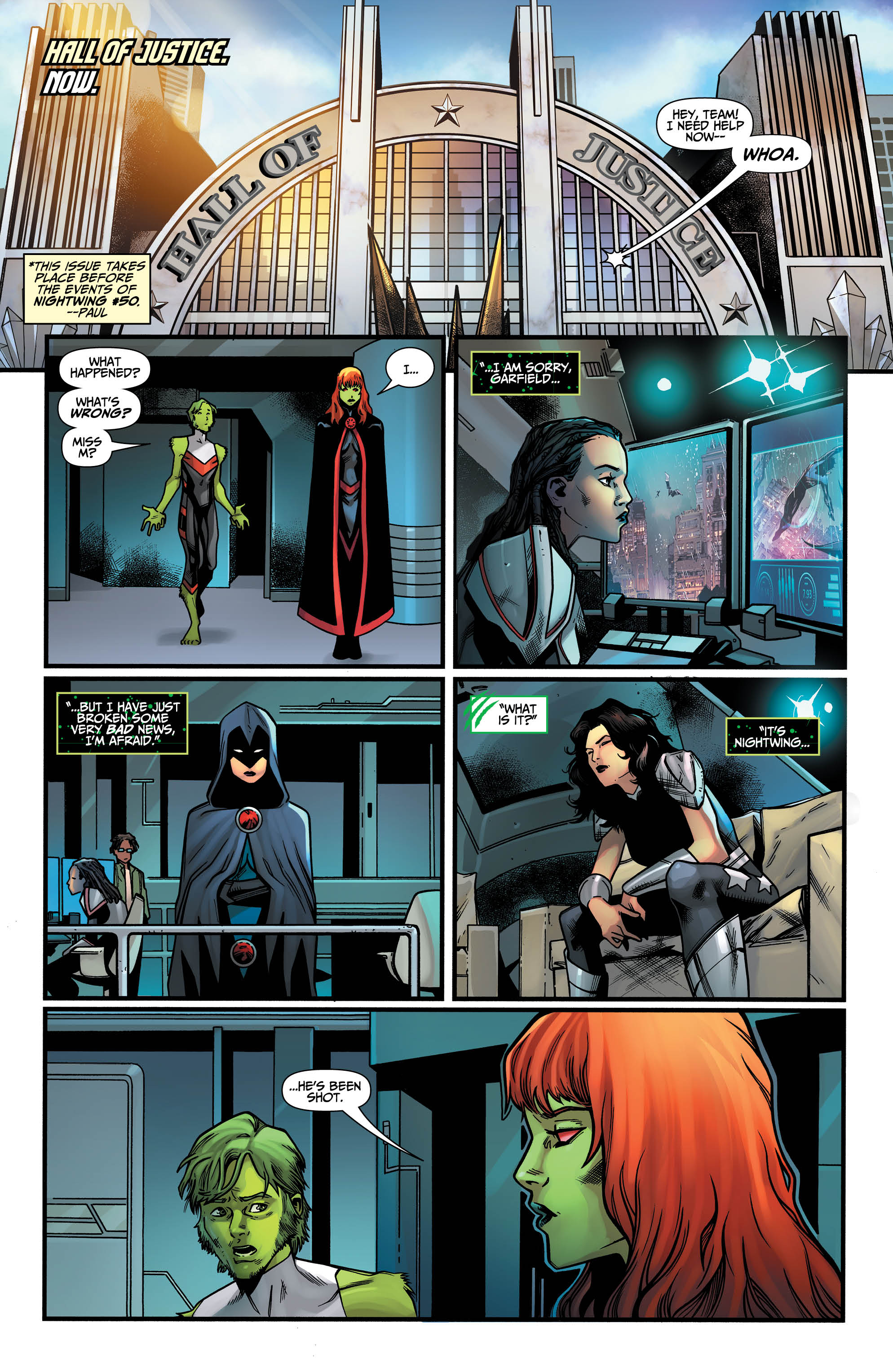 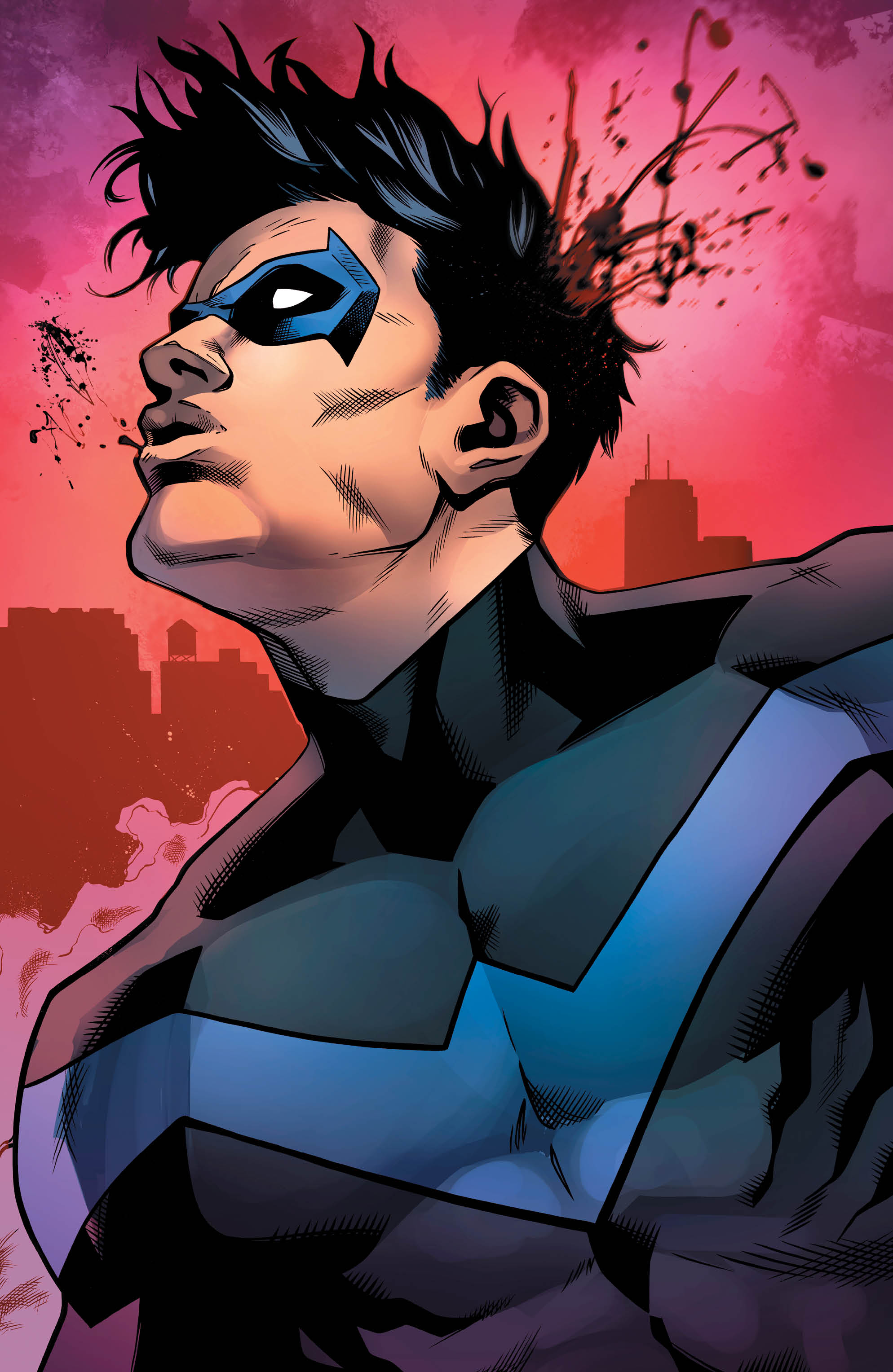 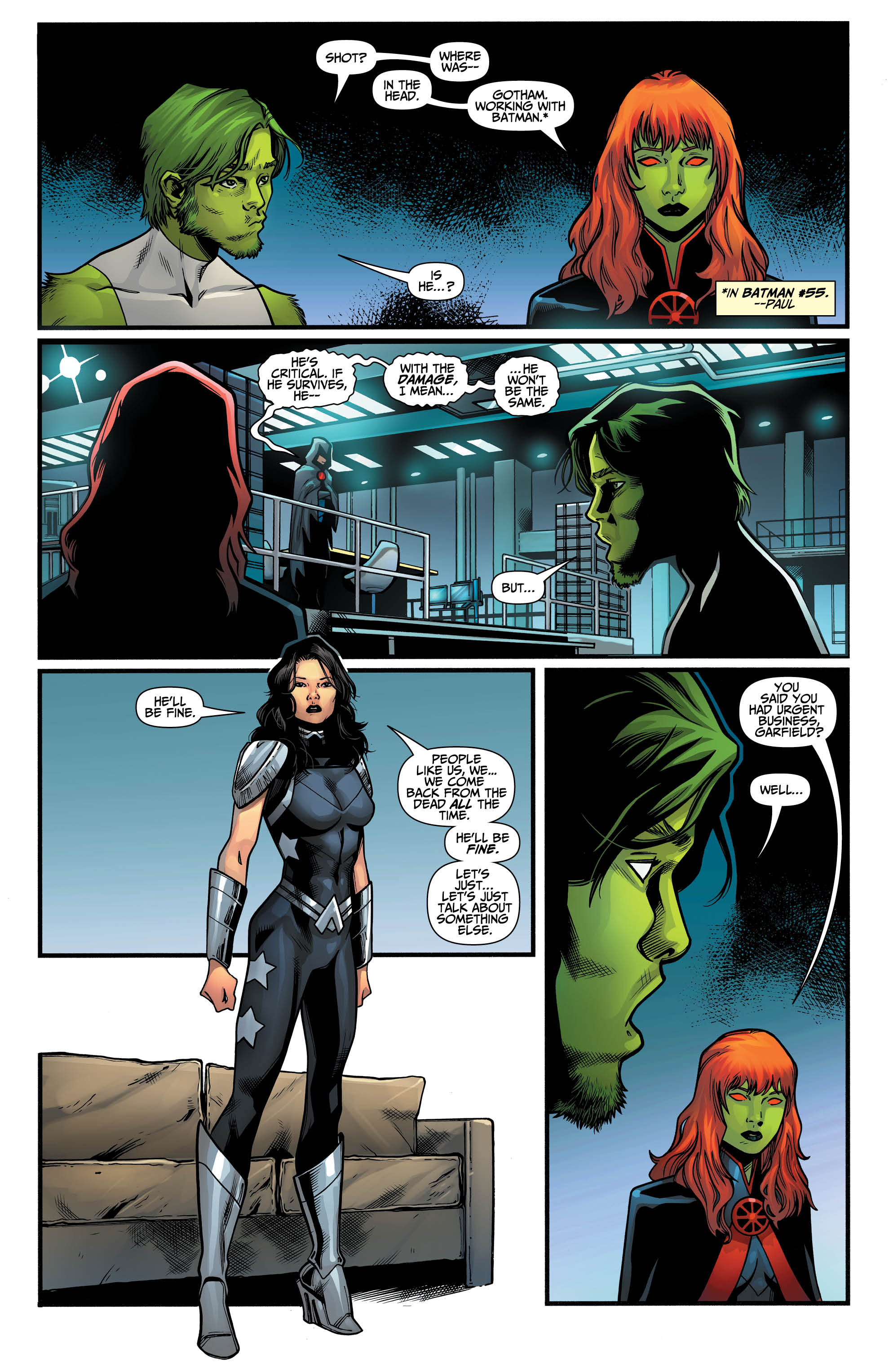 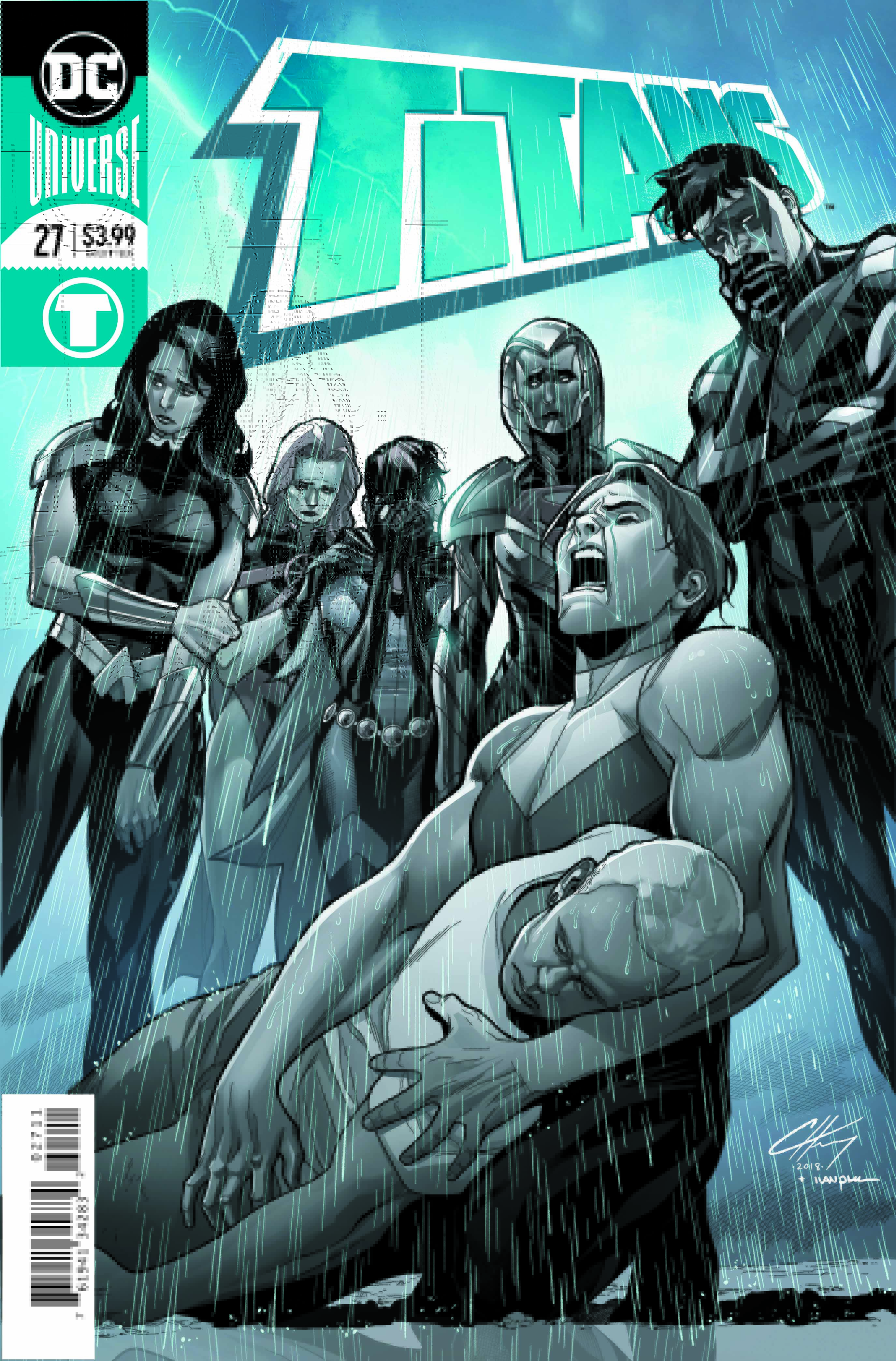 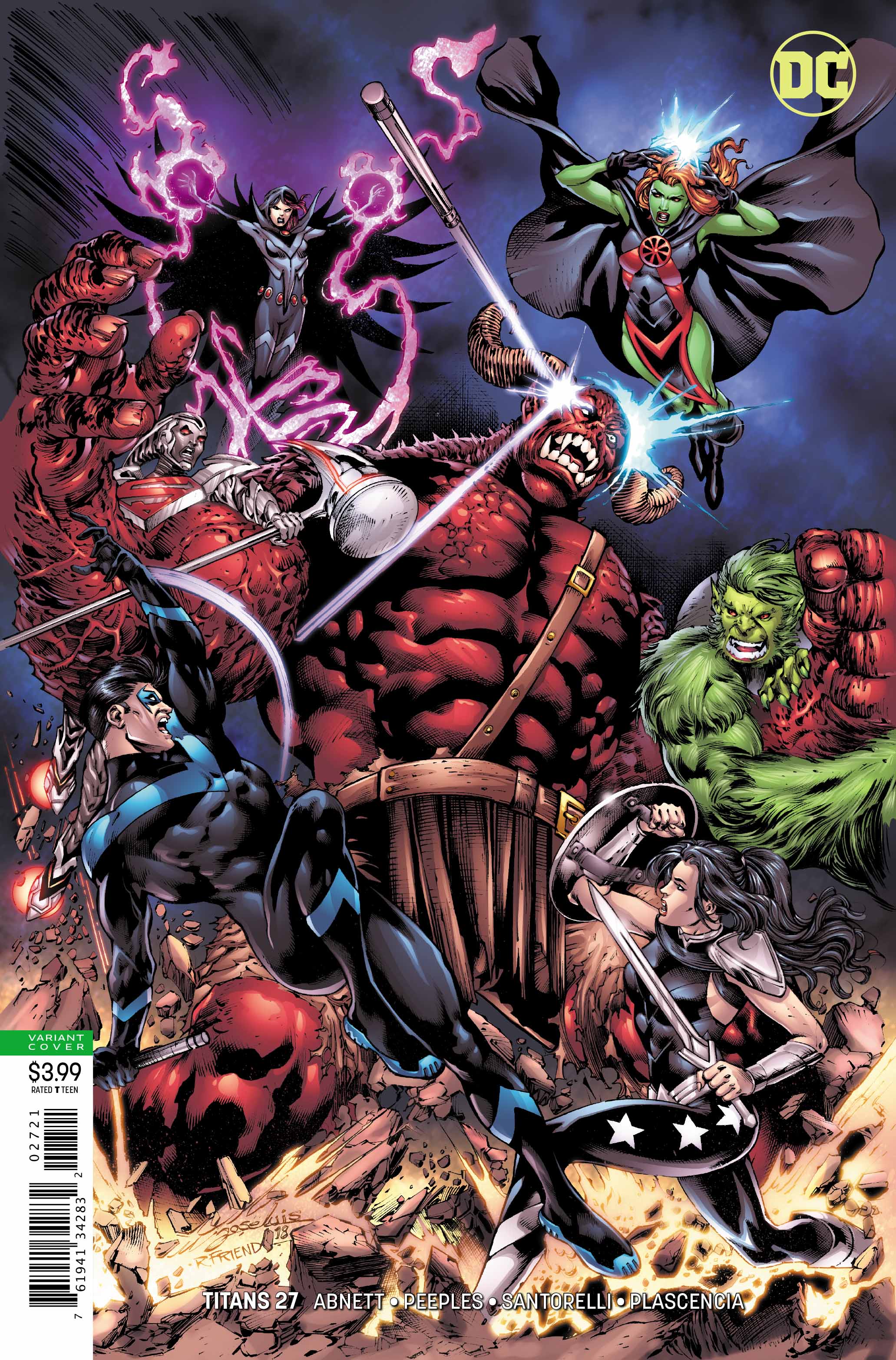 In Titans #27, storylines started coming together. Donna has continued her drinking and readers can understand why. She’s not handling the news well, heartbroken as her long-standing teammates and friends are injured or dead. Dan Abnett’s story, which started with the introduction of Jenna Lacey – a girl on a train who is one of the first to experienced the power of transforming, emergent energy. Her locket with St. Jude – patron saint of lost causes – symbolically made its appearance in Titans #27. Beast Boy grew increasingly anxious and perplexed because control of his powers continued to elude him. Here, he grew more desperate. Tyler Baines (see Titans #23) lies in a comatose state. The Titans attempted to revive the dying teen with a concentrated dose of emergent energy to no avail.

While storylines came together, Abnett moved the story forward by retaining tension where needed. Tyler’s death hits Beast Boy hard as he feared to share the young boy’s fate. His rage takes hold of him several times throughout the issue. Yet, he and Miss Martian connect on a deeper level. Miss Martian feared to have her secret exposed and admits to feeling deeply. As a result, she confides in Donna Troy. Likewise, Raven also confides in Donna who seemed to assume a leadership role with the team in Nightwing’s absence.

The final panel of Titans #27 teased the return of another original Teen Titan, Tempest/Aqualad.

In conclusion, Titans #27 was an incredibly poignant issue. Two characters loomed large over the team without being present. Two iconic characters lie dead or gravely injured. Consequently, Donna Troy – one of the original Teen Titans – struggled to cope. And yet, this new team of Titans persevered. Abnett moved the story forward in compelling ways while paying homage to the past. Those with knowledge of Teen Titans lore will appreciate the sentiments. However, losing so many of the original team proved more emotionally draining than anticipated.

Did ‘Gotham’ Give Us A First Glance At Harley Quinn?