The DC Universe streaming service is set to go online later this year. It’ll be a perfect place to catch high quality streams of animation and live action content. Titans looks to be the first offering of new, live action, material. It’s been in development for a few months, and we’ve just been given a good shot of something very exciting.

The look of the signal is simple but realistic. I commend whoever was near the set and able to take the picture, as they’ve made every effort to make it blend into the background. 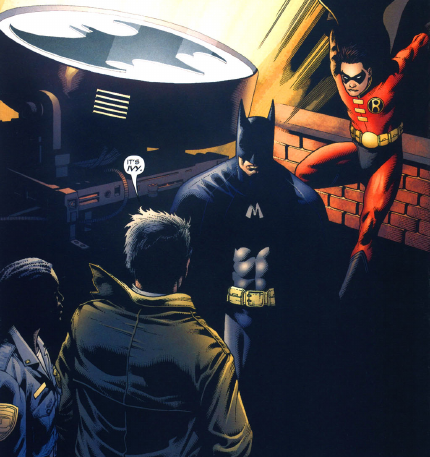 An independent streaming service wouldn’t make a prop that big and detailed for flashbacks or single episodes. This hopefully means that a television Batman could finally be making an appearance.

How involved will the Dark Knight be? My thoughts would see him at the very beginning of episode one. We’d see how Brenton Thwaites’ Dick Grayson may be eager to branch out on his own. It’d show the team’s formation, and Batman would be an external arbiter, there to pull their proverbial fat out of the fire if things go wrong, much to Grayson’s chagrin. Though this is just me speculating.

We know that they’ve cast Curran Walters as Jason Todd – specifically Red Hood which makes me wonder about timelines. It’s very possible that this season will start with Thwaites as Robin, but slowly fill the role of Nightwing.

The DC Universe online platform is a very bold enterprise for WB to put together. The possibilities of the kind of content it can broadcast is endless, and that’s just from reruns alone. With new content like Titans, Young Justice, Harley Quinn and Swamp Thing that’s bold enough to include Batman making a major presence. That’s a signal to me that there’s a lot to look forward to.