It has been two and a half years since Rocksteady’s Batman: Arkham Knight was released on PS4 and Xbox One, seemingly concluding the saga that they began in 2009 with Batman: Arkham Asylum. The Arkham series has cemented itself as not only the best representation of comic books and superheroes in video games, but it has also carved itself a nice niche in the conversation for one of the best gaming franchises ever.

Despite creating the series, and developing 3 of the games in it, Rocksteady isn’t the only studio to have their hand in the Arkham series. In 2013, WB Montreal released the prequel game Batman: Arkham Origins. Taking place long before Asylum, this was meant to be an early look at Batman’s career.  In reality, it was developed to give Rocksteady more time to create Knight for the then next generation of consoles (PS4 and Xbox One), so Origins was released to tide fans over.

This game was dismissed by a lot of fans of the series, since it wasn’t developed by Rocksteady, but it is a canonical part of the franchise nonetheless. While it may not be the best game in the series, it arguably has the best story. Seeing as the game takes place on Christmas Eve, fellow DKN writer Adam Poncharoensub and myself presented our arguments for and against Arkham Origins around this time last year to celebrate the holiday the only way we know how, talking about Batman.

Since Arkham Knight, there has been little updates on the series, and the way Knight ended many believed it was done for good. However, WB Montreal has recently listed a job posting for a Technical Director for a DC related project. 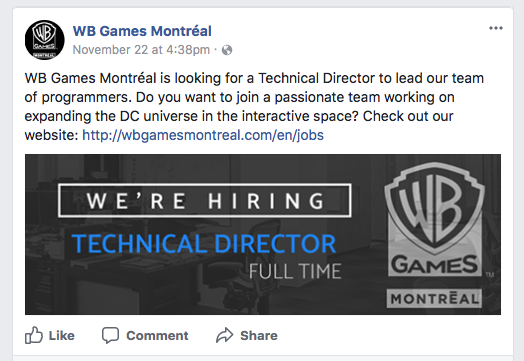 It’s unclear if this will be a Batman related game, since WB Montreal developed Origins, or if it will be something else entirely. There was a Suicide Squad/Deathstroke tease in the credits of Origins, but nothing was really made of that, so it’s possible they’re finally moving forward with it. It could be another Arkham game set between Origins and Asylum to continue to tell their own story without interfering with the established Rocksteady trilogy. It could be something else entirely, relating to any other member of the Justice League, or perhaps the Justice League as a whole! The possibilities are endless in the DC Universe, but this listing is proof that something is in the works.

What would you like to see out of WB Montreal in the DC Universe? Were you a fan of their brief stay in the Arkham series? Let us know!