“As we anxiously await the debut of Justice League, DKN celebrates the release of the live-action film with reviews of the DC Universe Animated Movies starring ‘The World’s Greatest Super-Heroes.’ Our seventh review is Justice League: Gods and Monsters.” 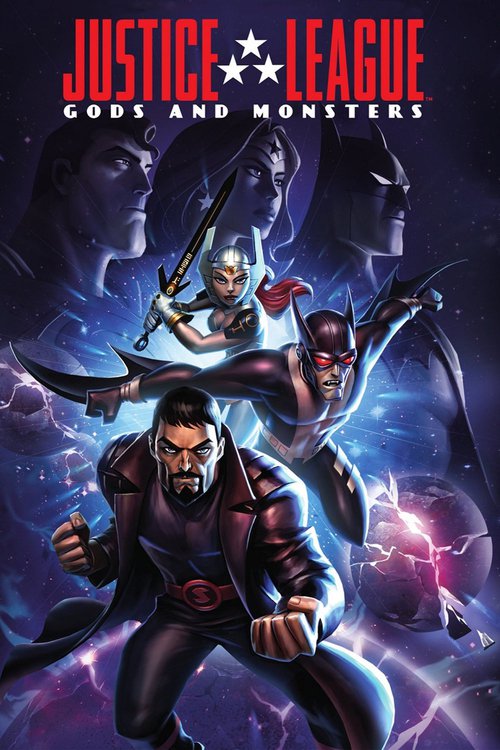 Welcome to the world of Gods and Monsters. An alternate reality of Superman, Batman, and Wonder Woman, where they are seen as gods with monstrous powers. In this “noir” reality, we have Hernan Guerra, Kirk Langstromg, and Bekka as Superman, Batman, and Wonder Woman. However, apart for the several darker turns of this world, this Justice League kills. And it brings in the age-old question of superheroes, what happens when powerful beings work against the law?

Superheroes are strong promotions for American propaganda. The Justice League, even the Avengers from Marvel are fighting alongside the American president and with American law. But that doesn’t always mean that they’re doing the right thing. Superman and other heroes have been aware. Even in issue #900 of Action Comics, Superman renounced his American citizenship, and this wasn’t his first time. The best heroes are aware of being tainted by bad politics. This version of Superman, Batman, and Wonder Woman challenge that in this sensational animated film.

It’s a noir world, with darker endings for many surrounding characters. Cyborg’s hero story is cut-short by tragedy, and each member of the Trinity carries devastating origin stories. 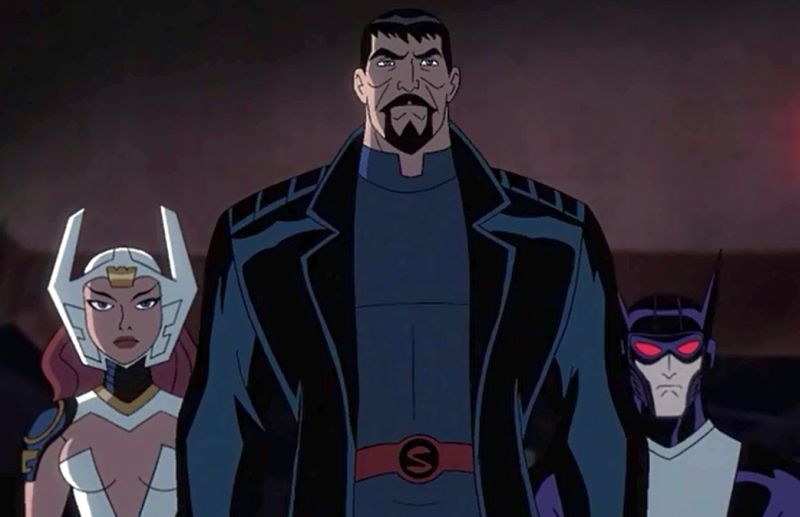 The entrance is wicked. It’s bloody, fast-paced, and it pulls you into their world quickly. The military and president is afraid of the League, but at the same time, the Trinity has only been beneficial to society as their victims are mainly terrorists and murderers. You will enjoy.

Kirk Langstrong, the Batman, is an alternated-vampire and requires human blood to live. And so, the League allows him to feed on criminals, in addition to his own adventures in Gotham City, killing off serial killers. If you’re +14, and comfortable with animated blood and gore, check out Batman’s short with distorted Harley Quinn, as if you could imagine her getting more twisted! This even troubled me.

His tragedy is strung along until the very end, making it the best and most painful twist. This is the message that comes with heroes who have pure hearts and kill: they can never be happy. Killing is the ultimate wrong-doing, and it eats away at pure hearts. Kirk is not malicious. His entire life aspirations have always been to enhance human life. 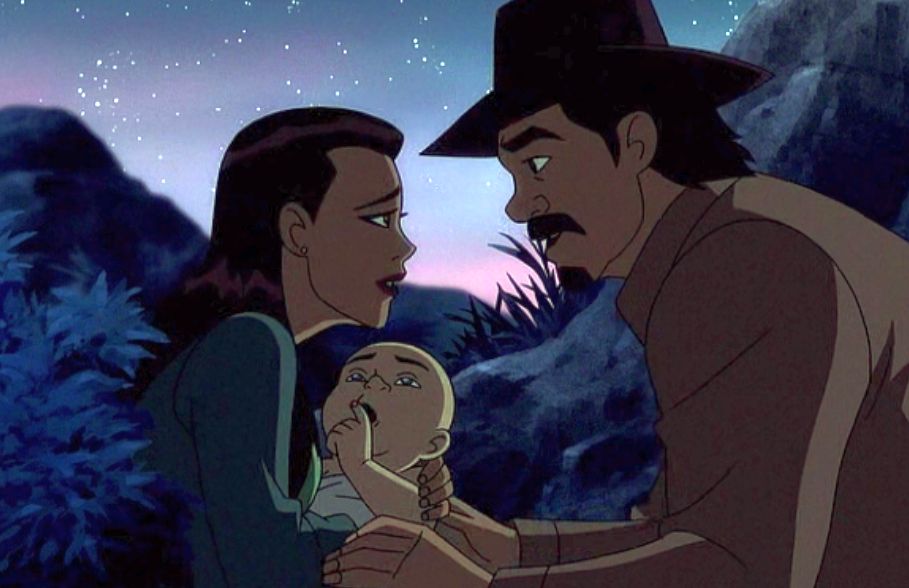 Oh, Latino Superman? Yes, please. Instead of his spaceship landing in Kansas, it lands in Mexico, where good-hearted farmers raised him and instilled good morals. I love how the characters speak Spanish, and Hernan amalgamates it to his daily conversations.

DC has worked in race-bending really well as of late. Although he kills the criminals, it’s always in the pursuit of goodness, and it always results in saving lives. This does not make it right but is only a testament to his goodness. You can see his care of his teammates as well; it really humanizes him.

Batman: You realize it’s been 10 years since I met you? I was on the run, everyone after me, and then you found me.

Down at the docks, middle of the night, a rat in my mouth. Why you took me out, I’ll never know.

Superman: You were hungry.

His tension between Bekka is less calm, but the back-and-forth flirty banter is enjoyable. Afterall, Hernan and Bekka have been together in their comic shorts. 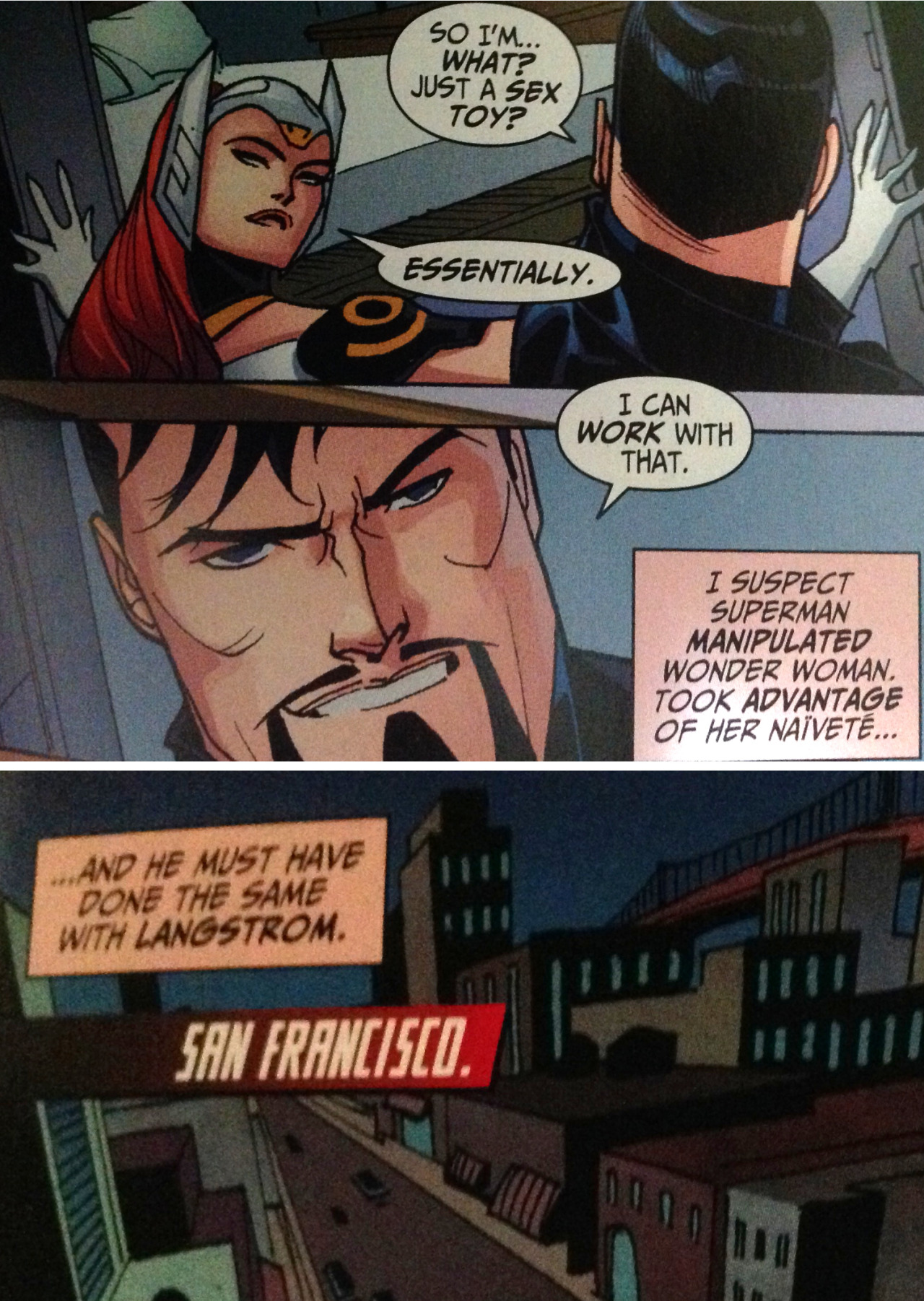 And a fun aspect that fans play with regards this panel is the thought that Hernan is a bisexual Superman. I don’t believe the writers and artists wanted us to read the story this way, but it’s difficult not to see it once it’s been noticed. Even in the panel above, after a very suggestive conversation between Bekka and Hernan, the reporter Lois Lane infers that he must have tricked Langstrom in similar ways. Maybe only with his charm, who knows?

Bekka is one bad babe. She is from a different dimension, and unlike Diana, not from an Amazonian world.

The film briefly mentions her romance with Steve Trevor, but he is not her true love. Her connection to Hernan is strong, and the film makes it feel mainly platonic (as in she will say no), giving a genuine narrative. 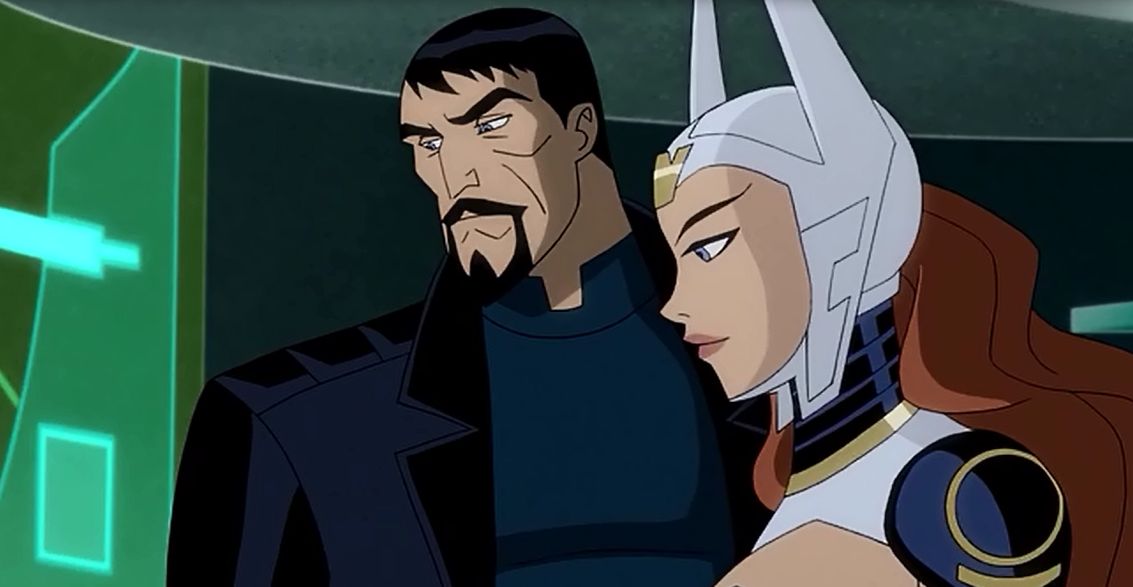 Her costume and weaponry are powerful beyond galaxies, but of course, being a Bruce Timm film with a higher audience rating, it’s going to be far sexier than usual. I’m pretty sure the android at the end had extremely detailed outlines…I think that’s my only negative about this fantastic movie. But its animation-style, very recognizable and beautiful. The women in this film are still fierce, independent, and I’m pretty sure every single one of them beat a [bad?] guy to death in this film. At least once.

Hands-down one of the best DC Animated films ever created. I crave more, and there is a decent amount of fans just begging for more shorts to come out. It’s worth your time especially for audiences who are infatuated by dark noir and horror animated films. This is not for children, but guaranteed you can’t rip your eyes away.

Don’t miss our review on the next DC Animated film: Justice League vs Teen Titans. Also, if you did not catch our past reviews, you can click here.