Doomsday, the ultimate killing machine, debuted 25 years ago. A humanoid made to hate all life—brought to prehistoric Krypton as an infant, killed by the harsh environment, and cloned as a stronger version to repeat the cycle. The child survived the environment, only to be killed by the predators of the planet; starting a new cycle. After several more cycles, the being could survive and kill and grew into its destiny to kill across the cosmos—and eventually even Superman.

If the Batman of Prime Earth has experimented with Kryptonite to keep Superman in check, then it only makes sense that one of the Batmen of the Dark Multiverse would experiment with the Doomsday Virus. In the massive Metal event, fans will get see what happens when one of the evil Batman doppelgangers uses that virus to turn himself into the unkillable Doomsday—and DC has released artwork showing of the Batman we’ll meet in Batman: The Devastator #1. 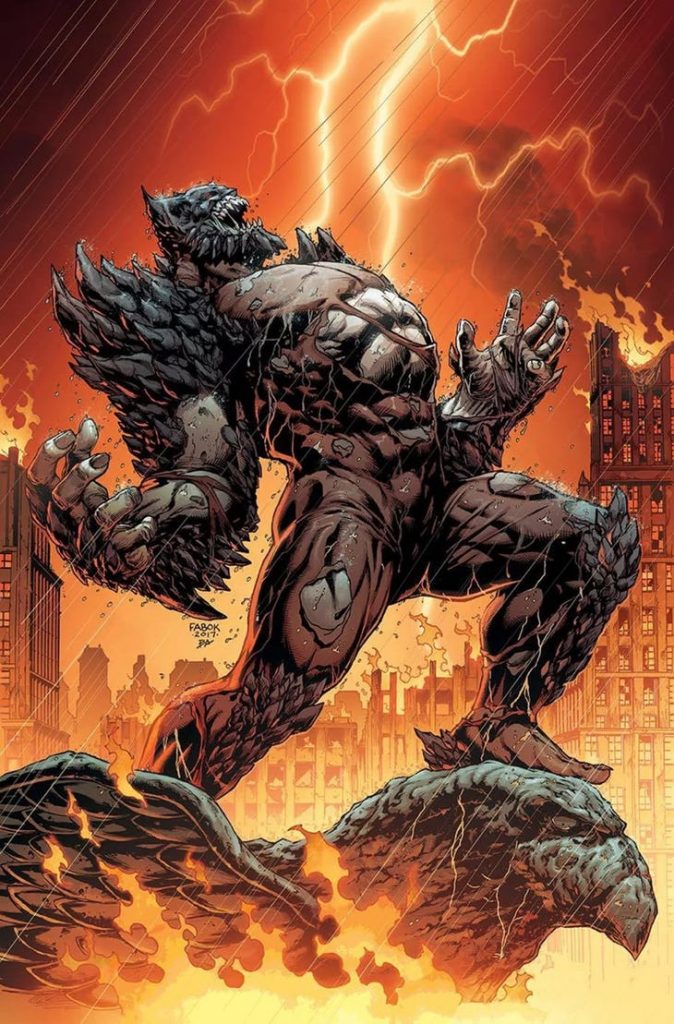 Doomsday is scary, but Doomsday Batman is another story—a man willingly becomes a monster. Doomsday Batman appears to be standing in triumph as, what is assumed to be Metropolis based on the eagle statue, the city burns. There are so many questions: is this Prime Earth’s Metropolis or another Metropolis from the multiverse? Is the cover foreshadowing the death of Superman? What drove Bruce to turn himself in a literal monster?

Scott Snyder and James Tynion, the writers leading the Metal event, seem to be keen on answering these questions, and more. They are creating fleshed out stories with these nightmares and, when announcing the line of books at SDCC this year, said it’s about giving answers to questions fans had asked:

“What if he took this one turn as a kid and wanted to bring his parents back in a way that would take him into the dark? What if after Superman died, Batman started experimenting with the Doomsday virus in a way that would prevent this from ever happening again, but he goes too far? … Why Bruce might use the Speed Force to try and be faster should a catastrophe have happened. Why he might go up against Ares.”

Dark Nights: Metal will begin to answer these question as it continues to roll out, with Doomsday Batman getting his own one-shot on November 1st, 2017 (marking the 25th anniversary of Doomsday’s first appearance) in Batman: The Devastator #1.