I feel like that sentence is about as wild as the first issue of Dark Nights: Metal. The issue was released this week to staggering reviews, lots of head scratching and plenty of smiles from comic book fans. After DC gave us a rundown of what’s ahead for Batman, they gave us another peek at what’s coming in November. And guess what? It’s more Metal.

“Bats Out Of Hell” is a crossover event, that finds the Flash, Green Lantern Corps and the Justice League taking on the evil versions of Batman from the Dark Multiverse. Each tie-in comes with a connected cover that when put together, creates the image you see above. 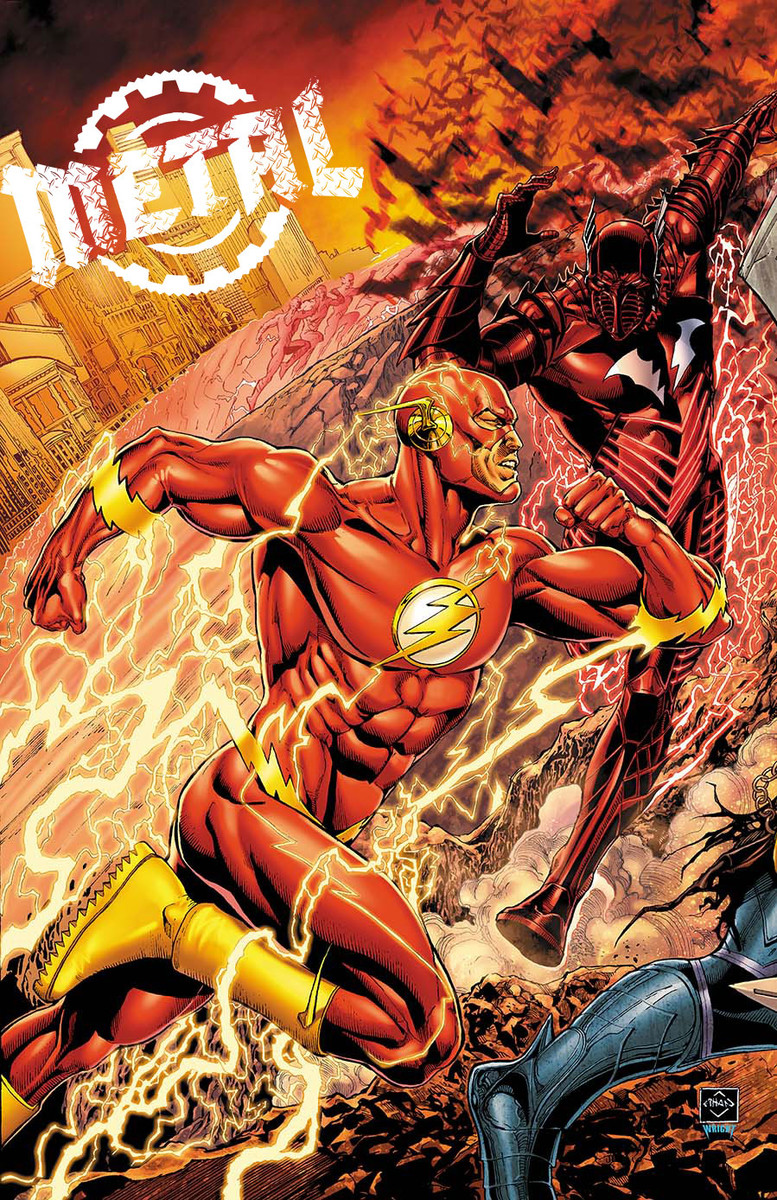 The Flash #33
Written by: Joshua Williamson
Art by: Howard Porter
“Bats Out of Hell” part one! After the harrowing events of Dark Nights: Metal #3, the Justice League has scattered around the world to find the only artifacts that can fight back against the invasion of the Dark Multiverse. The League thinks they know how to take back their world, but they are not prepared for who is standing in their way: The Seven Dark Knights of the Dark Multiverse. With all the brilliance of Batman, but none of the morals. Barry Allen, The Fastest Man Alive, is the first to get a taste of their plan, as The Red Death takes him on at the Fortress of Solitude.
On sale: October 25 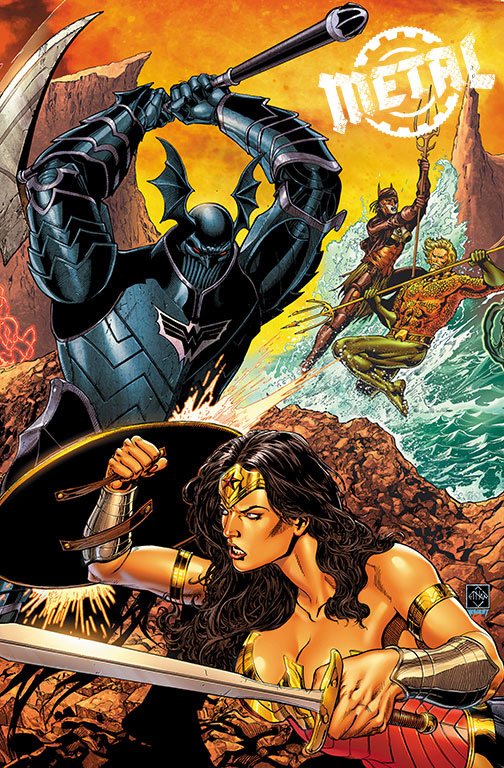 Justice League #32
Written by: Bryan Hitch
Art by: Liam Sharp
A Metal tie-in! “Bats out of Hell” part two! The Justice League have been separated by the dreaded Dark Knights and are forced into twisted Bat-Caves designed to kill them! The Batman Who Laughs and the Murder Machine experiment on Cyborg, seeing how he reacts to the horrors of the Dark Multiverse! Can the Justice League survive their worst nightmares made real?!
On sale: November 1 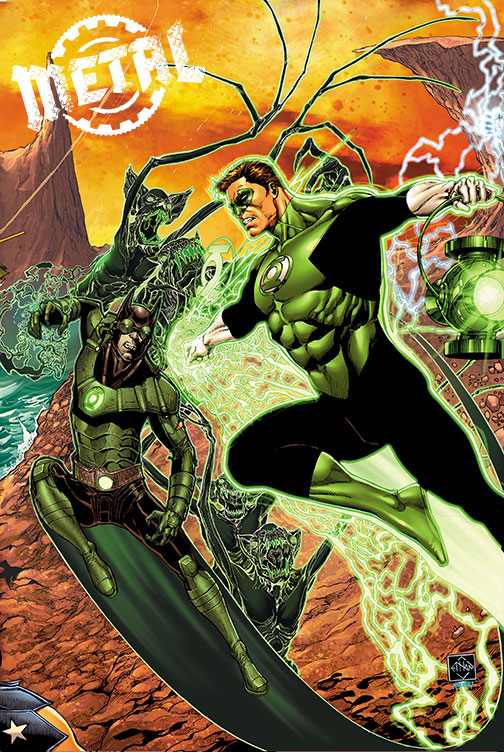 Hal Jordan and the Green Lantern Corps #32
Written by: Robert Venditti
Art by: Ethan Van Sciver
A Metal tie-in! “Bats Out of Hell” part three! The Dawnbreaker descends on Coast City, ready to suck its light away before moving on to the rest of our world. Backed up by the power of the Justice League, Hal Jordan stands ready to stop the perverted Lantern—until the Batman Who Laughs steps out of the shadows.
On sale: November 8 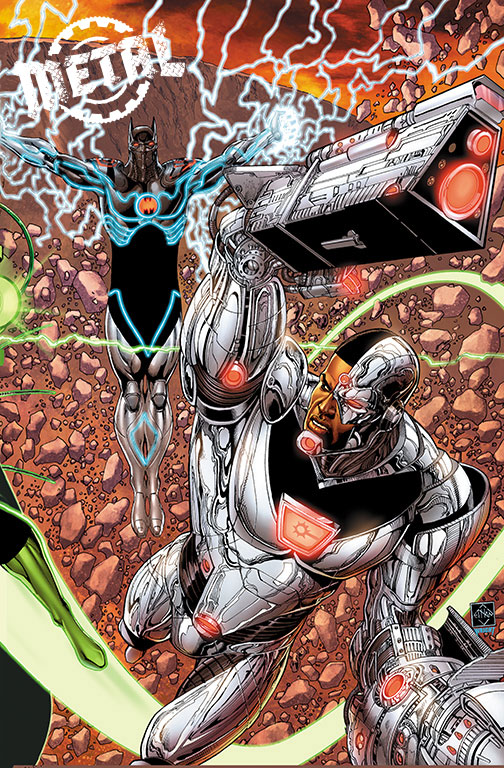 Justice League #33
Written by: Bryan Hitch
Art by: Tyler Kirkham
A Metal tie-in! “Bats Out of Hell” finale! It’s the Justice League versus the Dark Knights! FIGHT! The Dark Knights have taken a fallen Justice League to the frightening castle of [REDACTED] inside the possessed Gotham City, where they will be prepared as a sacrifice!  The Justice League’s only hope is Cyborg, whose return from the Dark Multiverse has changed him forever!
On sale: November 15 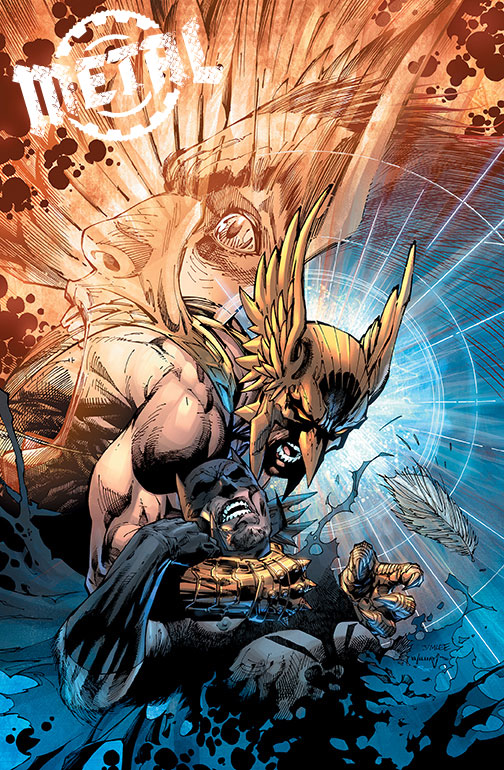 Hawkman: Found #1
Written by: Jeff Lemire
Art by: Bryan Hitch and Kevin Nowlan
One of DC’S greatest heroes is missing! No one has seen or heard from Carter Hall—a.k.a. Hawkman—in years. Reincarnated repeatedly since the dawn of humanity, Hawkman has spent his many lives uncovering history’s most fantastic mysteries, and now he has become one himself! Take a journey into the one of the darkest corners of the DC Universe as a mysterious man tries to piece together what happened to Hawkman, and how it all connects to the events of Dark Nights: Metal!
On sale: December 20

Whew! Well, there you have it, start looking for a third job now so you can afford all of these tie-ins. Regardless of the cost, I’m intrigued and looking forward to what DC will be giving us over the next 6 months.