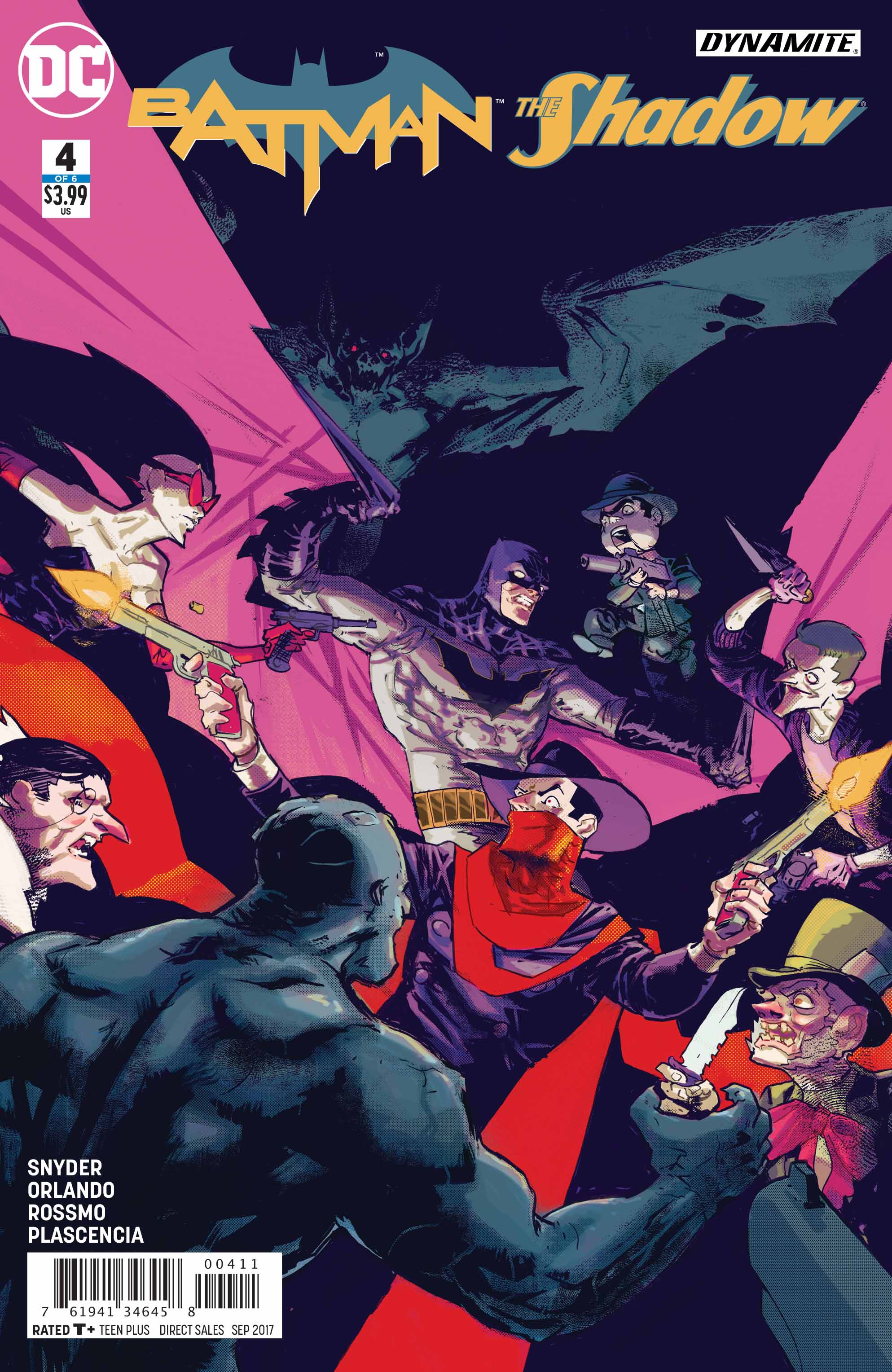 Batman is forced to face his most villainous foe, the Joker, who brags about another one of his gruesome crimes. He’s teamed up with all of Gotham’s  demons, including a new evil, the Stag. His identity and purpose remain in question, but what we do know is that he’s after Batman’s heart. Literally (spoilers!).

Scott Snyder and Steve Orlando are killing it! With such blessed writers, no wonder this is currently one of the best-rated series in comics. Each speech and thought enhanced panel after panel, my eyes jumped all over the place, and I loved going back and studying the story. It’s such a wicked collection of baddies. Snyder and Orlando impressively delve into the minds of evil. I love the banter between Batman and Joker. After watching the LEGO Batman Movie, I find myself seeing the chemistry between the two to be very prominent whenever they meet in Rebirth issues.

Joker: You do care.

What I love is the metaphorical and artistic symbolism of hell. The background carries only fire and death (burning skulls), and it’s filled with evil torturing the only good there.

Even after Joker plans to rip out Batman’s heart, he saves Joker from a killing shot. Batman, to me, represents a fallen angel. In Dante’s Inferno, Satan suffers the most agony. He is trapped in the heart of it all: the final circle of hell. Throughout history, stories of Satan have been revamped to be a more morally ambiguous character, at times even a friend and aid to humans. For example, in Anne Rice’s Memnoch the Devil, his mission is to save as many humans from hell, ushering them into heaven; he and God are actually on decent terms. I find issue #4 alludes to this punishment and status for Batman, and it wouldn’t be the first time Batman has been equated with the devil. The public even rumors him to be a demon.

The chemistry between Batman and Shadow is marvelously written. Clearly, Batman is morally conflicted working alongside him. However, Shadow is kind enough to only maim and not kill. Their conversation carries fun undertones; they adore fighting for the good and getting rid of baddies. I realize the fight is between Batman & Shadow vs. Joker & Stag. Snyder and Orlando brilliantly write the interactions between these four in an impactful order. Joker and Batman face things alone while Stag waits as a bystander until Shadow shows up. We watch Shadow save his partner’s life; Stag saves Joker’s. They mutually benefit the other, which makes for a strong team balance. 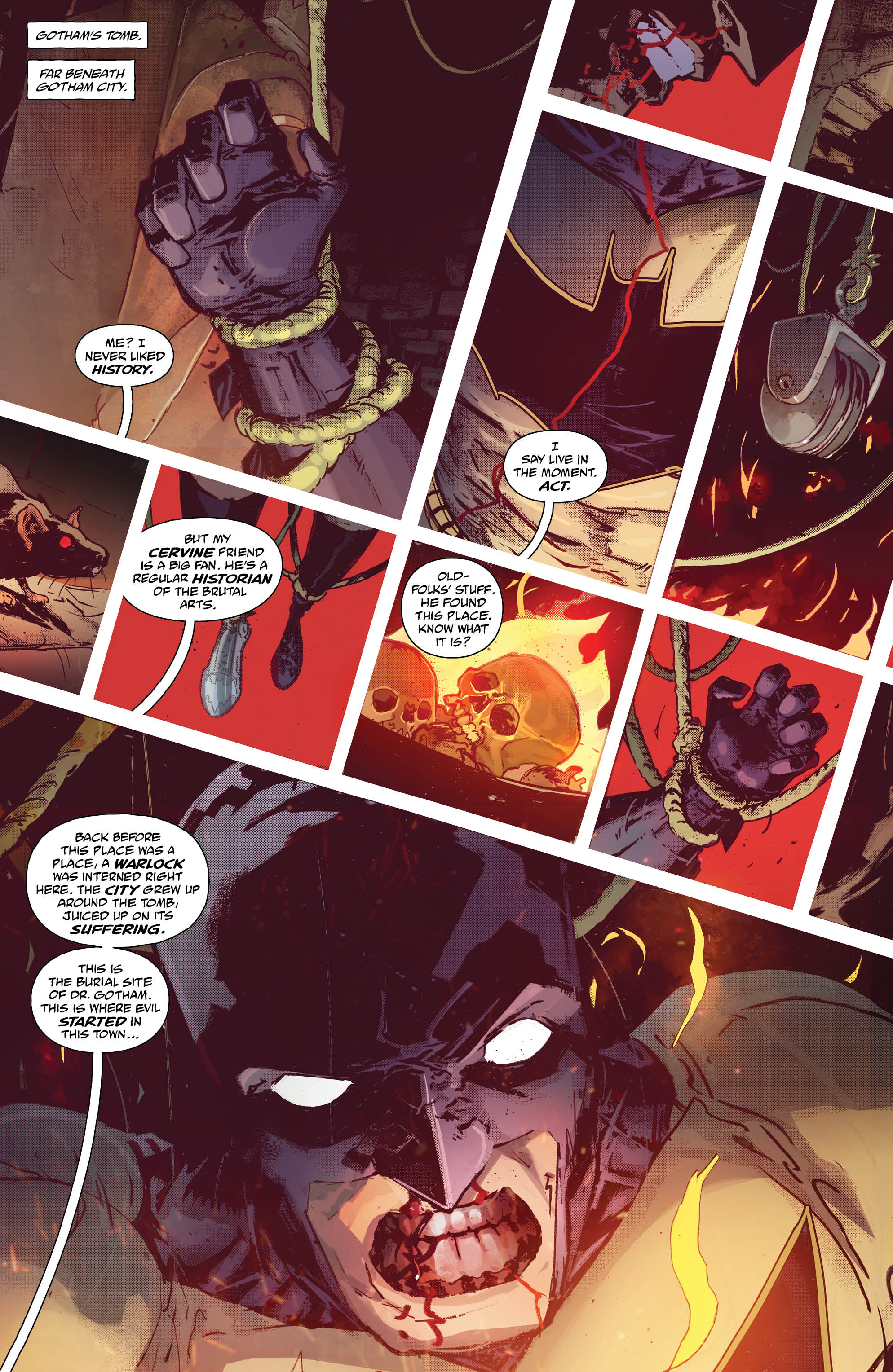 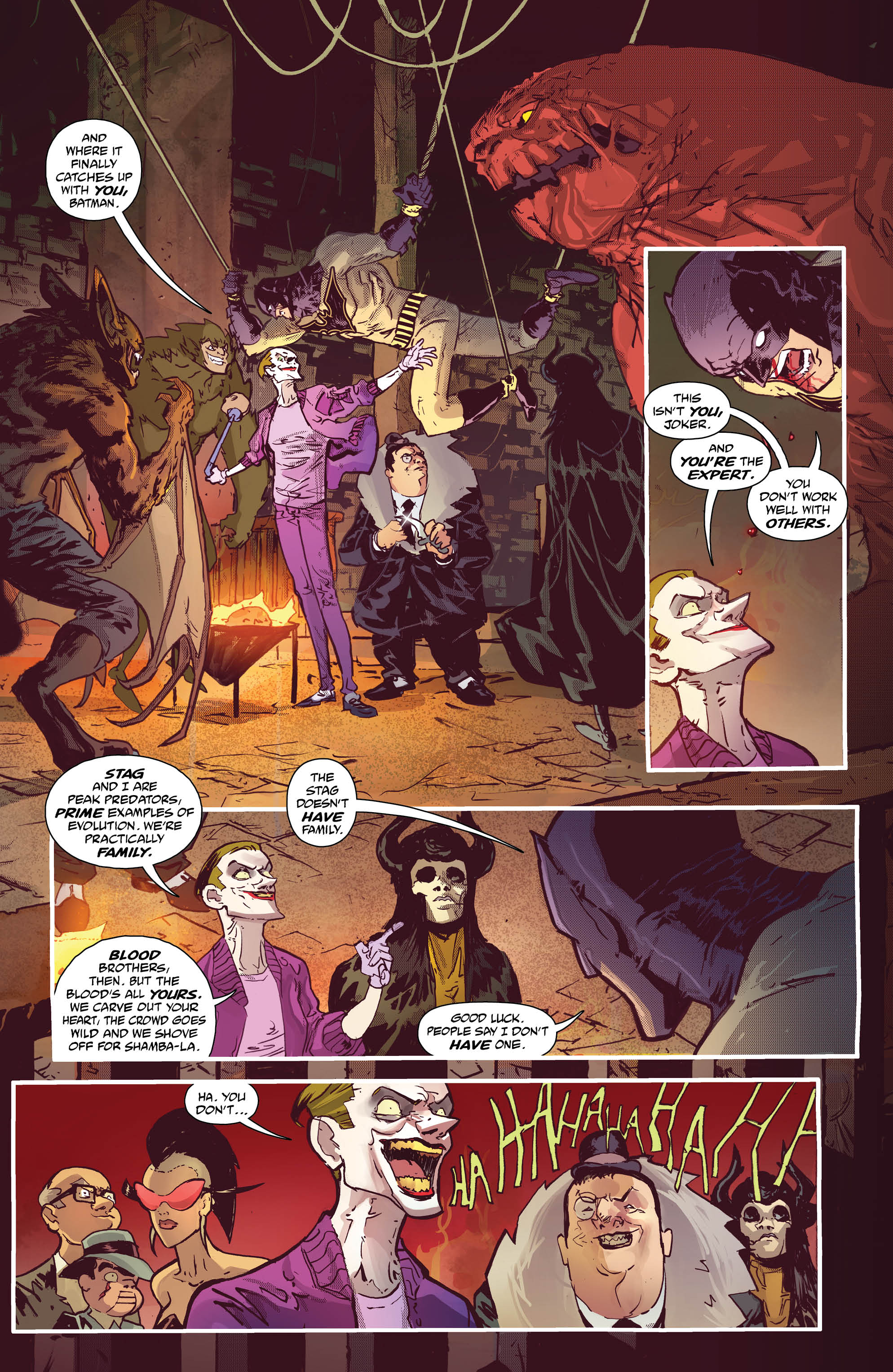 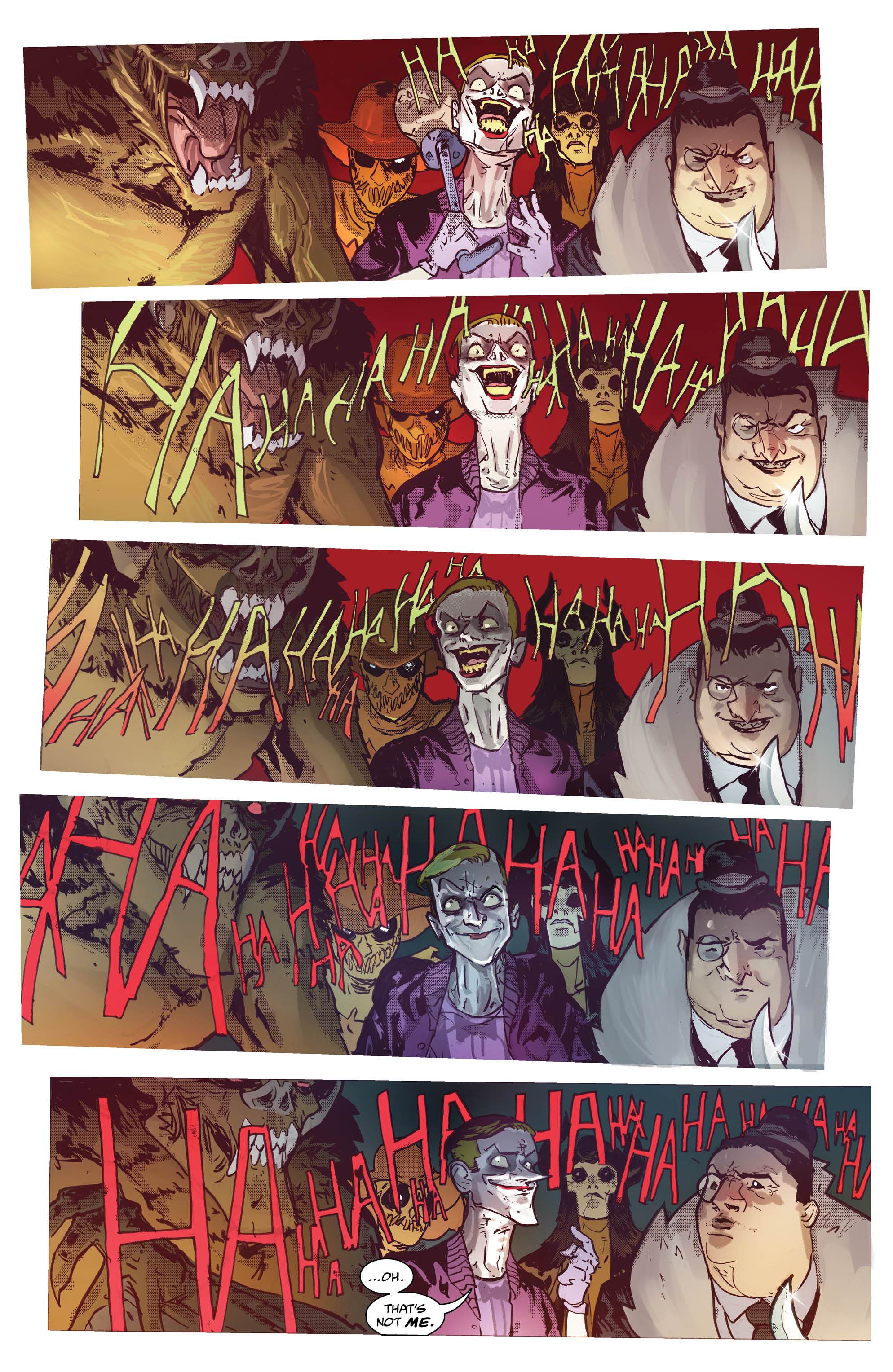 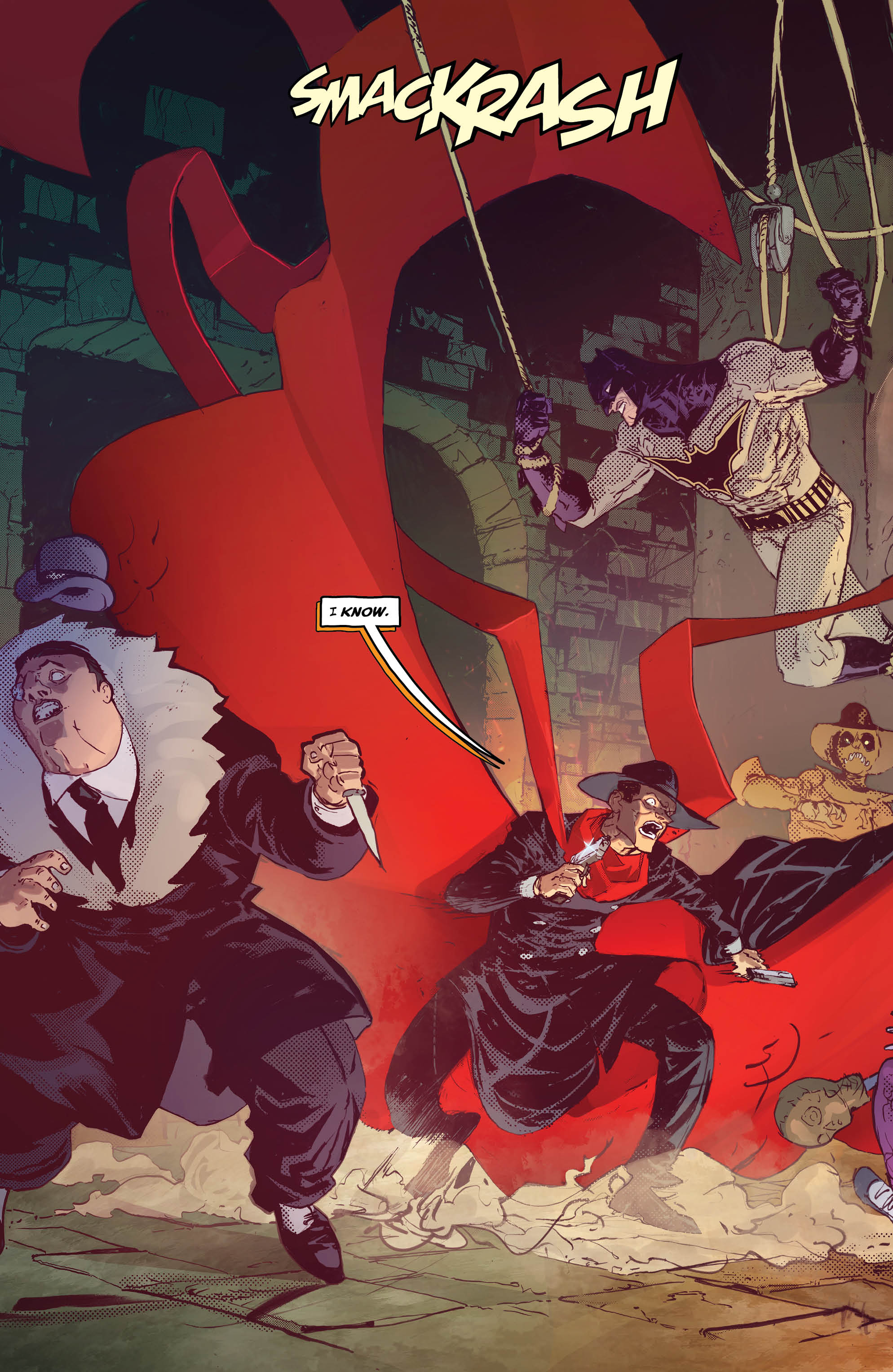 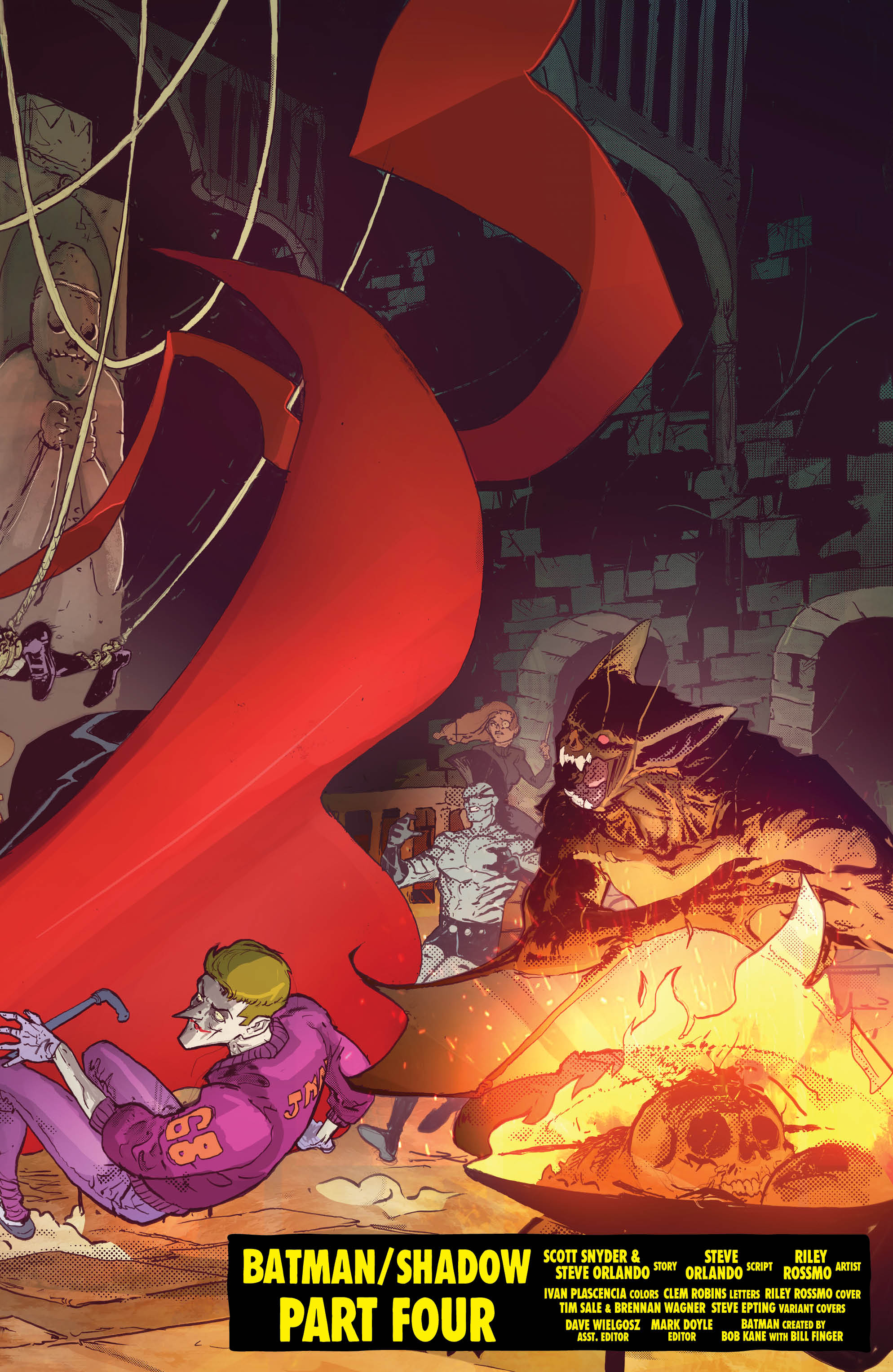 The art is gorgeously gory. The element of horror is pronounced, fitting the Dark Knight so well. Both fighters thrive in darkness, and Plascencia’s coloring is a knock-out. Rossmo’s work encompasses the villains perfectly, each cheeky glare, and Stag’s horrific silence is golden. I can’t imagine anyone else drawing for a story like this. Rossmo’s eerie body structures impose so much discomfort. He illustrates Joker’s skeletal form and sharp features, fitting the evil that he is. Batman’s expressions are powerful; there isn’t a moment where he gives up until he looks broken saving the Joker’s life, consequently he is conflicted saving a villain so capable of grotesque work, but this is his rule. Afterall, killing him would be the endgame for us readers.

This is an amazing crossover series; I cannot express it enough. I’ve been craving depth and a witty team up with Batman, and the writers deliver. They’ve made a fascinating detecting series, with only a few supernatural moments. It’s filled with humans, which is one of the most appealing aspects of Batman and crew. This evil exists in our world, whether in war or capitalism. Even if we can’t fight alongside them, it’s cathartic to see villains go down at the same time providing us with symbolic realism as the heroes still suffer because no victory is without suffering. There are only a few more issues to go, I cannot wait, and at the same time, I need savor each issue as I’ll miss it once it’s over. It’s a must have for the collection!