“The Man from Monster Valley” Part 1 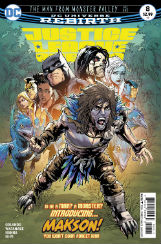 After reading Justice League of America #7, my enthusiasm for this series reignited like a roaring fire blazing within a stone-walled fireplace. The awe-inspiring, watercolor-like art style had me drooling at my keyboard the whole way through. Luckily, my keyboard was protected by a cover. Otherwise, I would have to buy a new laptop- again. But that is an unrelated story. Now, back to the review.

Once I had my first glimpse of issue #8, I was honestly disappointed the series wouldn’t retain the stunning art style featured in the previous issue. Although issue #8’s artwork certainly isn’t bad and I grew to like it after my second read through, it lacked the phenomenal artistic quality shown in issue #7. Fortunately, the story really gripped me.

Issue #8 opens up with a cave-man like person, along with his dinosaur companions, being chased by a squad of robotic S.K.U.L.L troopers. The cave-man engages in an all-out brawl with the troopers. Outnumbered, outmatched, it would appear the cave-man is about to lose this fight- until the Justice League of America arrive in time. Using their combined power, the Justice League of America were able to easily defeat their robotic foes. However, not without sustaining a few casualties. The cave-man’s dinosaur “family” were sadly killed when they were caught between the crossfire. The cave-man mourns over the loss of his “family.”

One week later, it’s revealed that the cave-man’s real name is “Brenton Hamilton,” the beneficiary of the Hamilton Court Fortune. We learn that Brenton’s parents died in the same plane crash which resulted in him being stranded at Monster Valley, when he was only 3 years old. For the past 30 years, Brenton was raised by the Valley’s inhabitants and was named “Makson.” That was until the Justice League of America returned him to civilisation. 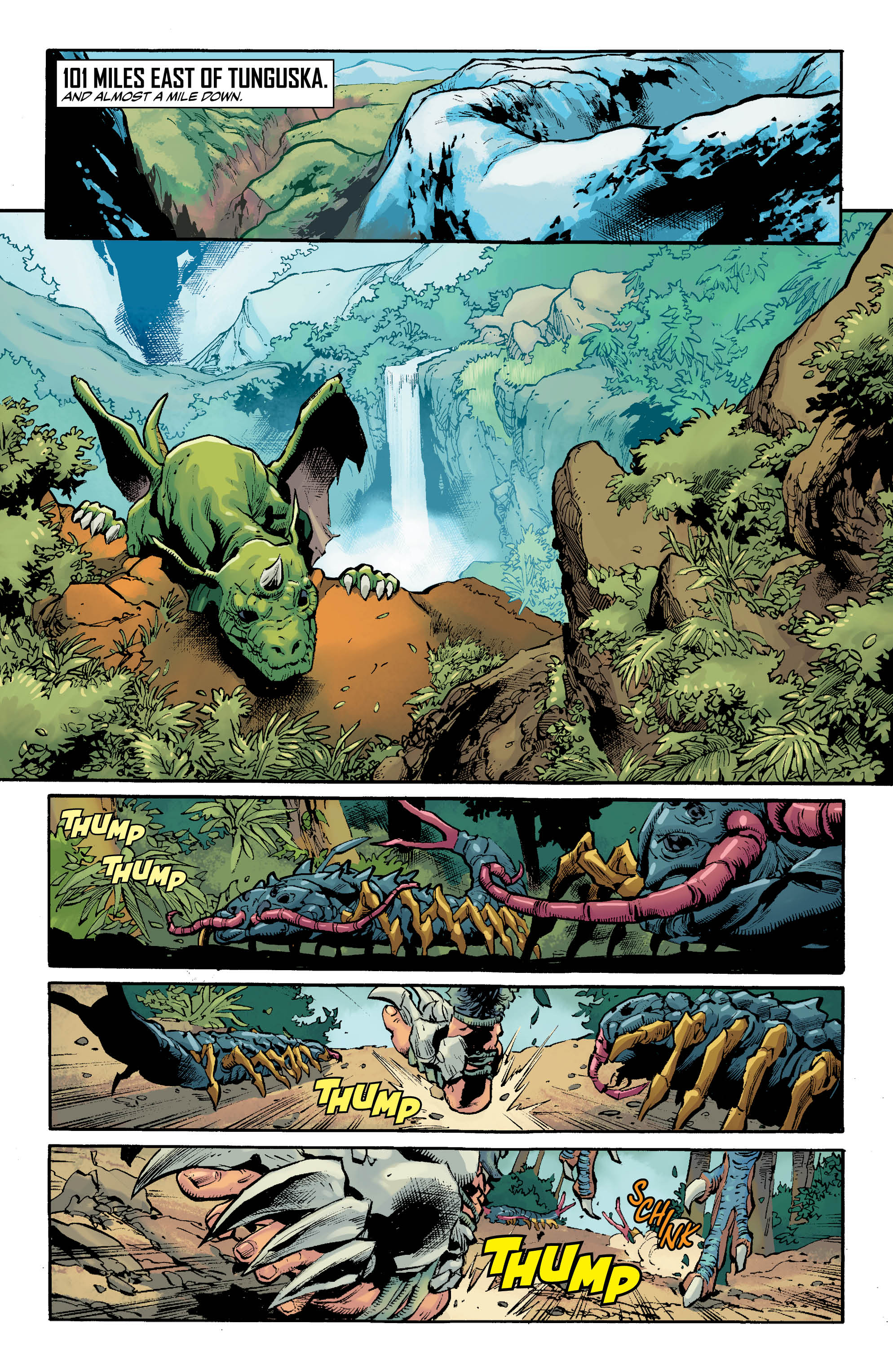 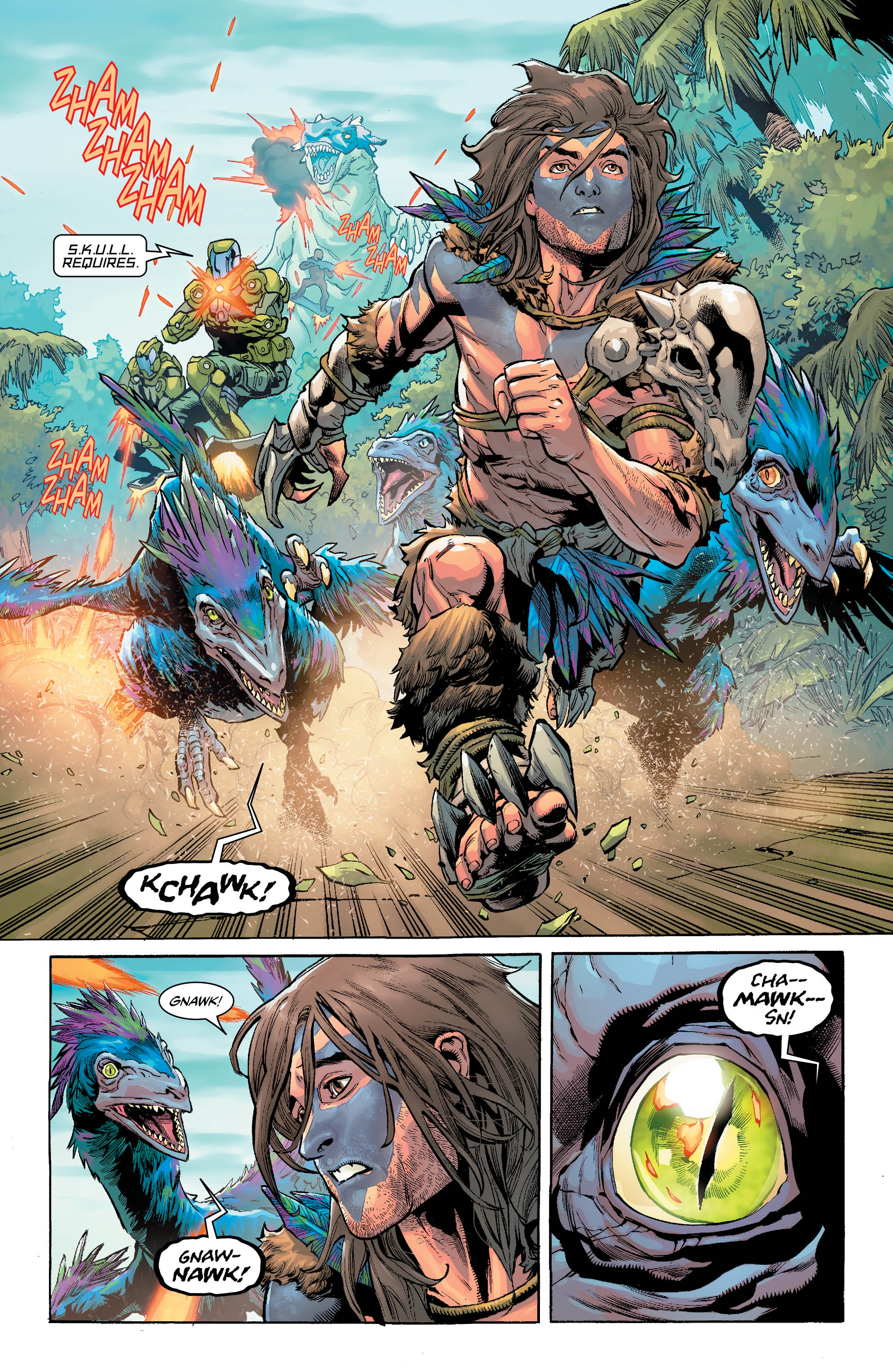 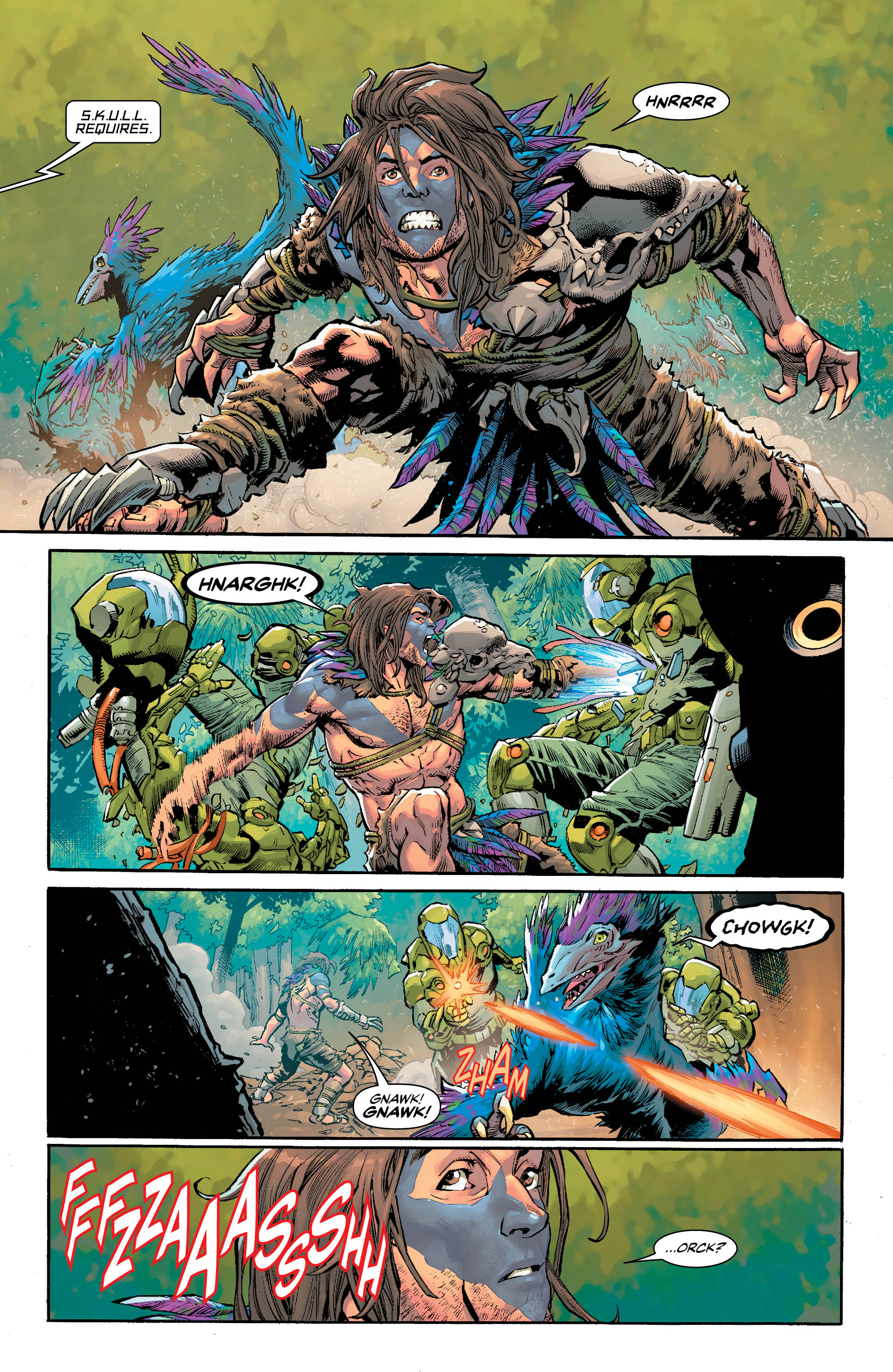 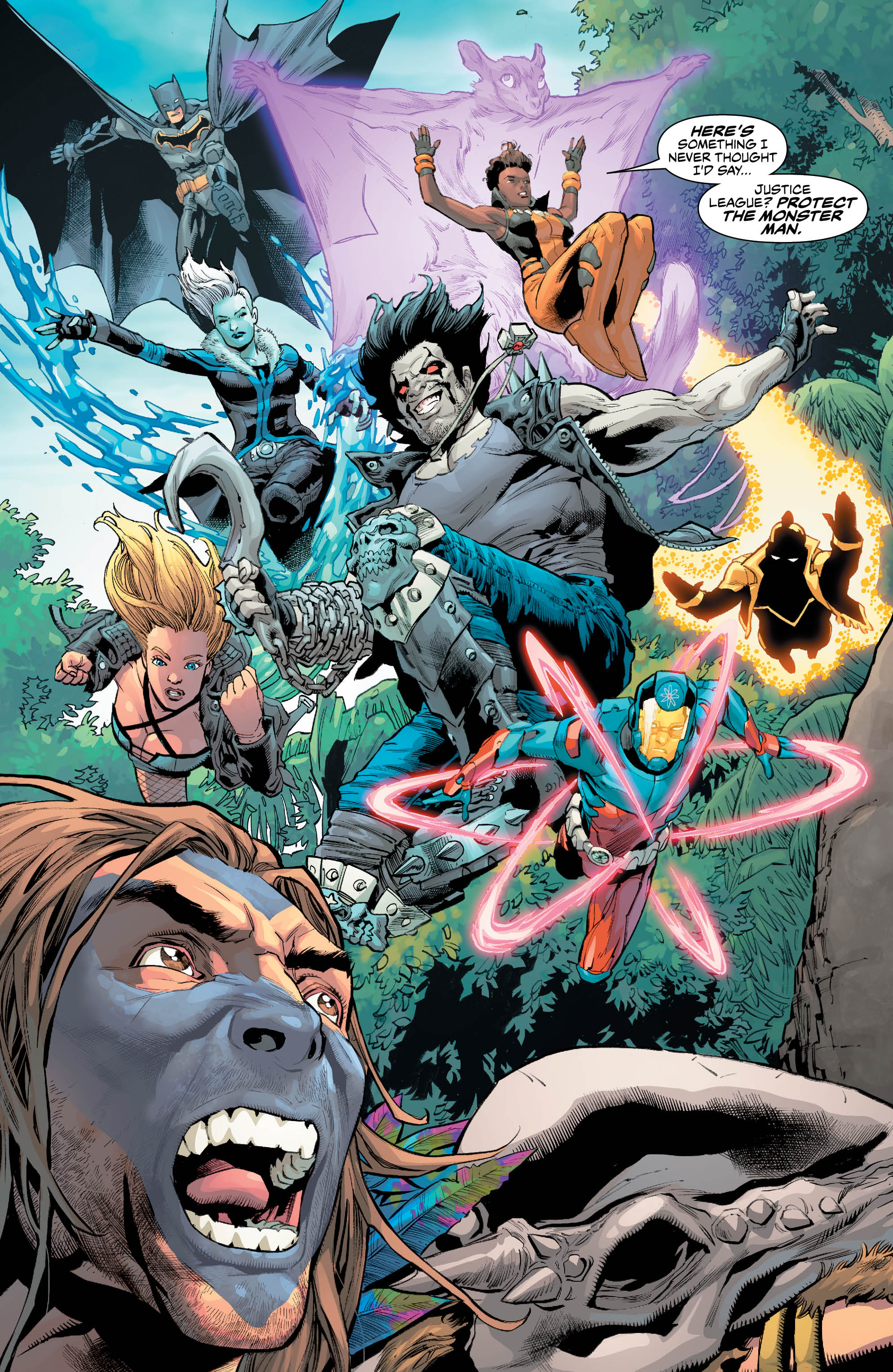 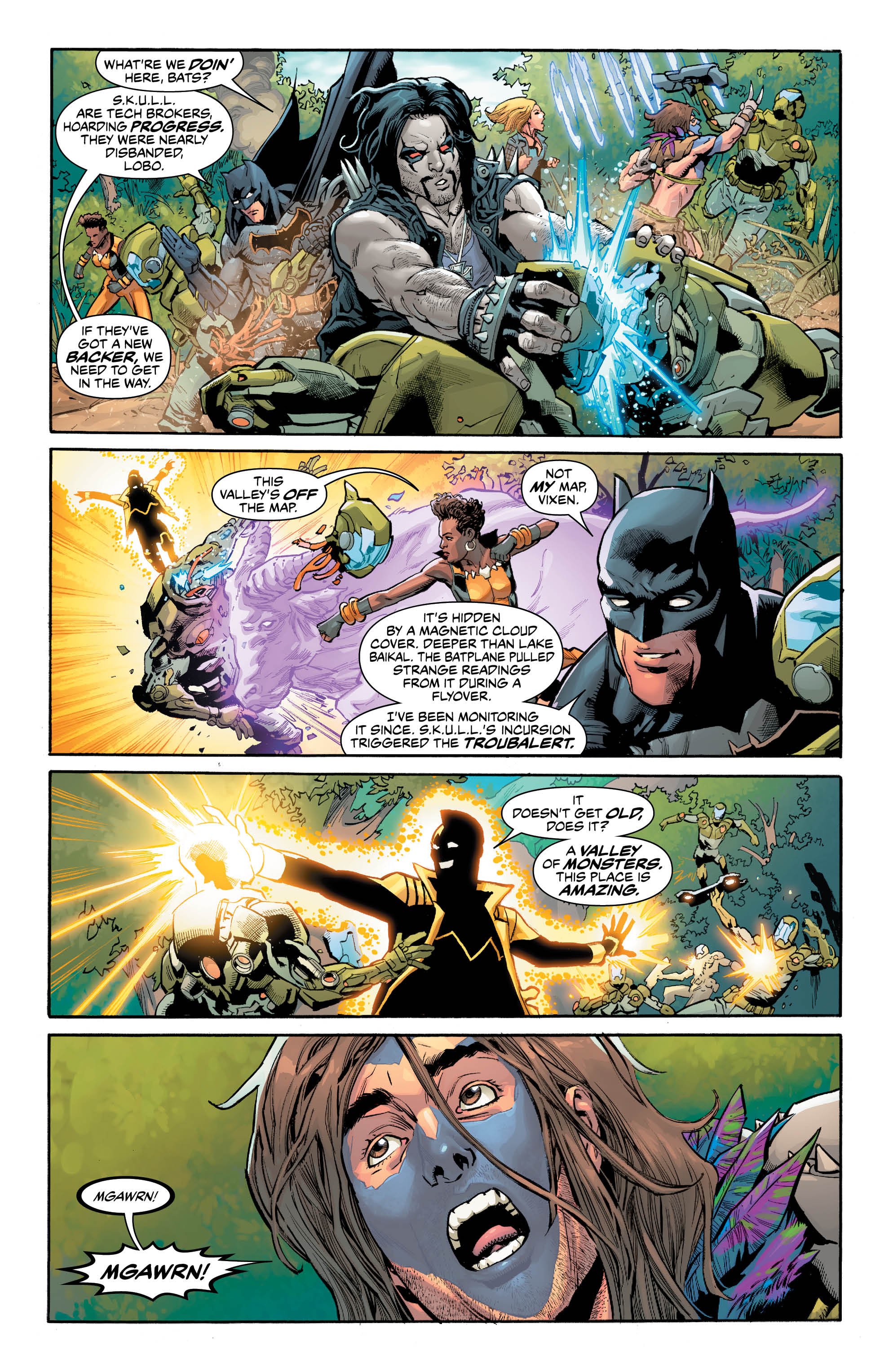 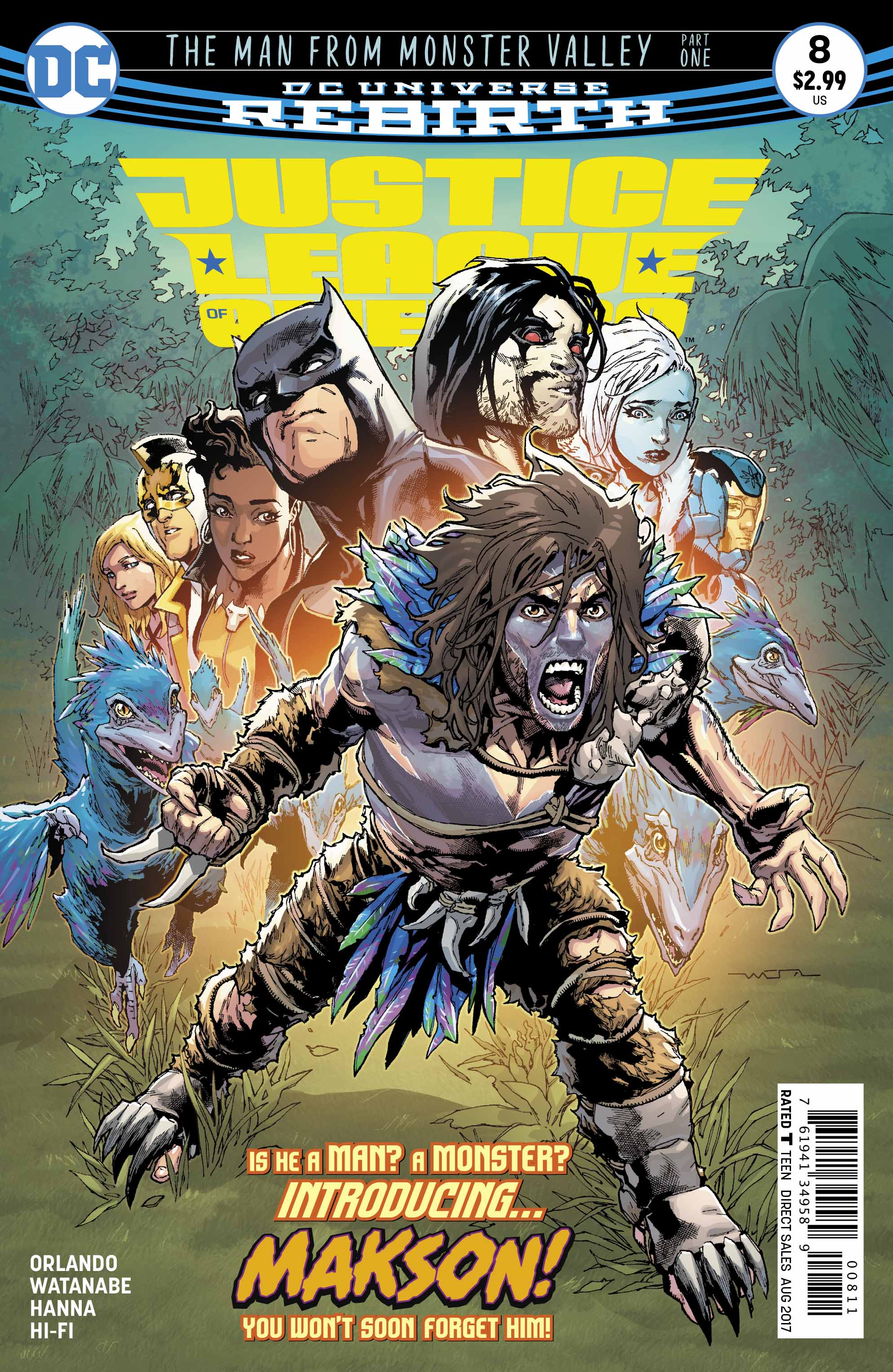 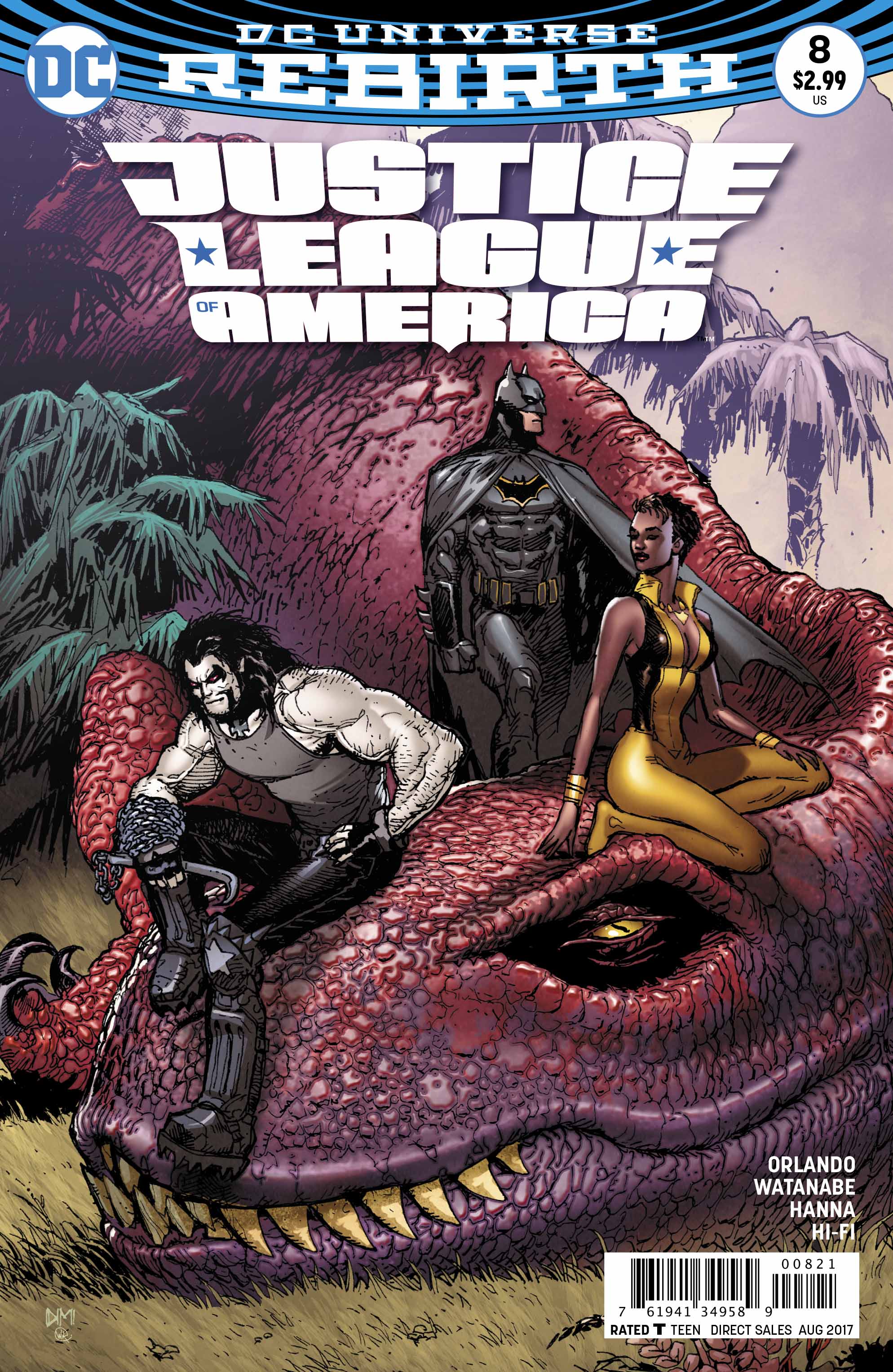 Surprisingly, for someone who hasn’t been in contact with one another human being in 30 years and learnt how to speak English by reading airplane emergency manuals, he’s adjusting to modern society pretty well. Seriously, he went from speaking three words at a time to fluent english, all in the span of one week. It doesn’t seem really plausible. Despite Makson’s unbelievable fluency, I became invested in his character. As he was relaying his life’s story living in Monster Valley, I had a strange feeling that there was something eerily suspicious about this guy. Like he was hiding some ulterior motive, and I wasn’t the only one who grew suspicious of him.

Listening to his inner detective instincts, Batman sets off to investigate more about Makson’s mysterious past. This ignites conflict within the team, which Steve Orlando executed brilliantly. The Ray objects to Batman’s covert investigation of Makson, as he believes the League’s main priority is to help people like him. However, Batman and Atom soon uncover a shocking discovery about Makson’s past, and his unnerving plans for the future.

Aside from the team dynamic, the best aspect of this issue is Makson himself. Apart from his less than plausible adjustment to the English language, he made for an interesting character. I’m intrigued to see where Steve Orlando will take this character. The panels were finely constructed and it rendered the comic easy to read along. I always appreciate it when Steve Orlando inserts some hilarious banter between Batman and Lobo and issue #8 is no exception.

The action did not disappoint at all. Despite the large number of notable characters comprising the JLA, Orlando still manages to showcase (most) characters in spectacular fashion.

Alas, while I did miss issue #7’s captivating art style, the story admittedly hooked me. I was intrigued to dwell more into Makson’s secretive past, and was instantly shocked to learn what he has in store for his “human” family. The new art style was fine, however I did feel the background environments could’ve had more detail drawn into them. Overall, this is shaping up to be an impressive story arc and I’m looking forward to what happens next.

My Top 10 Batman Memes of All Time