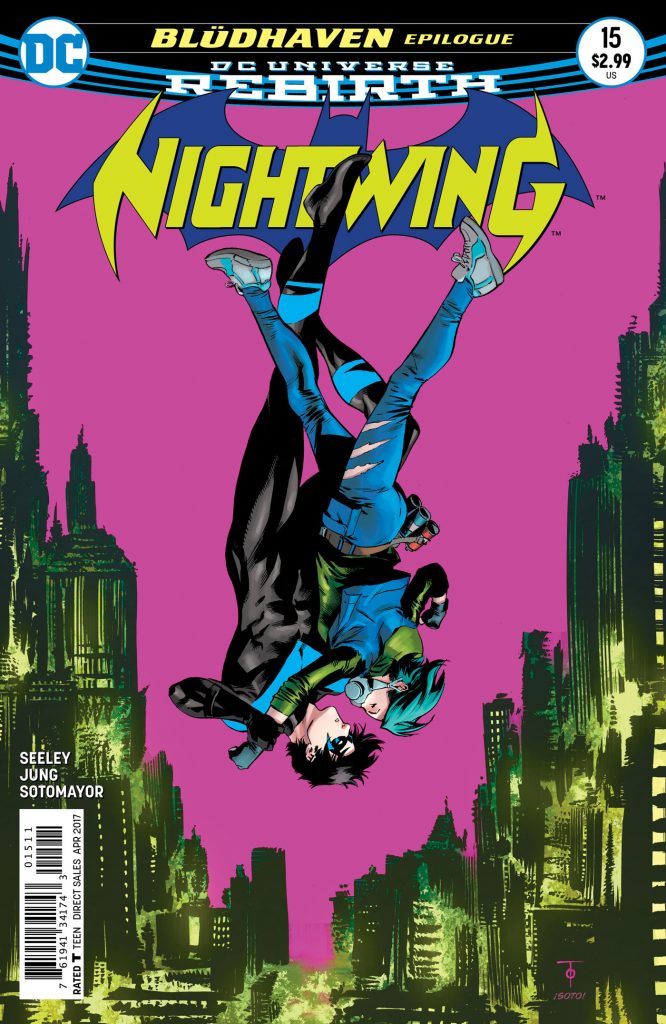 In the story of any good hero, there’s always a romance. Robin Hood had Maid Marian. Hercules had Megara. And since I guess I’m the hero of my story, here’s a tale of romance…

The end is finally here – “Blüdhaven” has come to a close, and it is with mixed feelings I write this review. On one hand, I am glad the arc resolved in a nice way and didn’t drag on for far too long. On the other, I didn’t want it to end. But in keeping with the tradition that is Tim Seeley, this issue is yet another stand-out addition to Rebirth. So let’s get to it! The first lines of this issue (as seen above) set up the story from the word go and promise another comic book romance – but we all know how those end. I had my predictions from the start of this issue – and one of them turned out to be bang on the money, but I’ll get to that a bit later.

There are a few cool little things I want to point out that aren’t story-related but made this issue super fun to read. First of all, the lettering for this issue comes from Carlos M. Mangual.”Why is that significant? He does every issue of this series.” I hear you asking. Well on page 2, Shawn is seen hailing a taxi that has a familiar looking number plate: “MNG-UAL76.” Obviously, the letters here abbreviate Carlos’ surname, but the 76 comes from his birthday – which after searching the web for, I discovered to be May 8, 1976. I know it’s a little thing but it was actually really cool to notice and gave the issue a neat little Easter egg. While he certainly isn’t the first artist/letterer/writer to do this, this is the first time I’ve noticed it personally without help from the Internet.

The second quick thing I want to discuss is the artist for this issue: Minkyu Jung. I couldn’t shake the feeling I had heard that name before, so I went back through my reviews until I discovered the 2016 DC New Talent Showcase #1 review that I posted back in December (which you can find here). This issues included a Catwoman and Wonder Woman story that had art drawn by Jung. Throughout 2016, Jung contributed artwork for series such as Gotham Academy and Batgirl, but this issue of Nightwing is the first time Jung’s has been the lead artist on a book! It’s awesome to me that an artist I have admired the work of for a while has now provided art for one of my favourite series, and honestly this book looks incredible. I mentioned in the New Talent Showcase review that I was impressed by Jung’s art, and honestly I’m now even more excited to see what comes next. 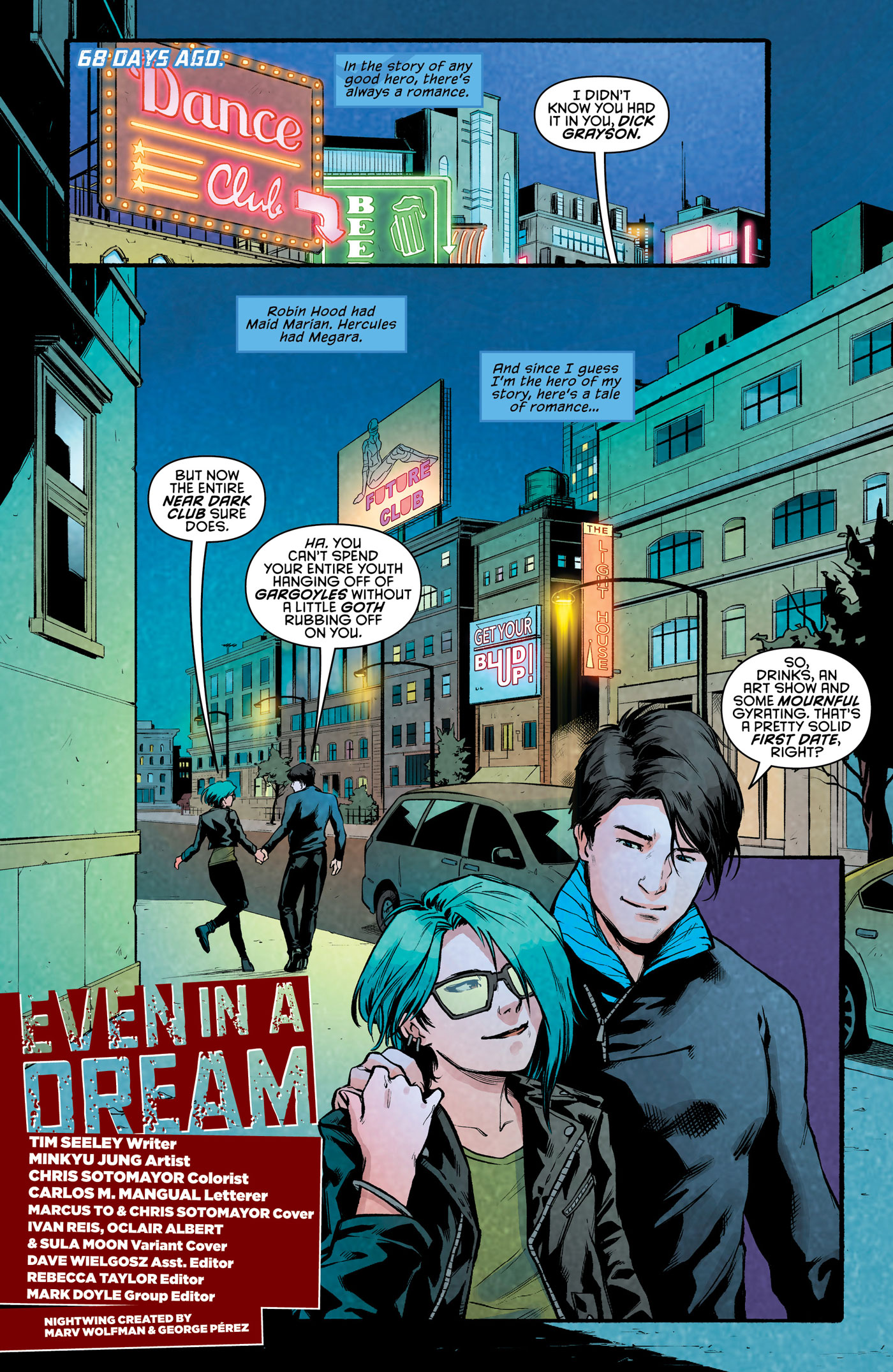 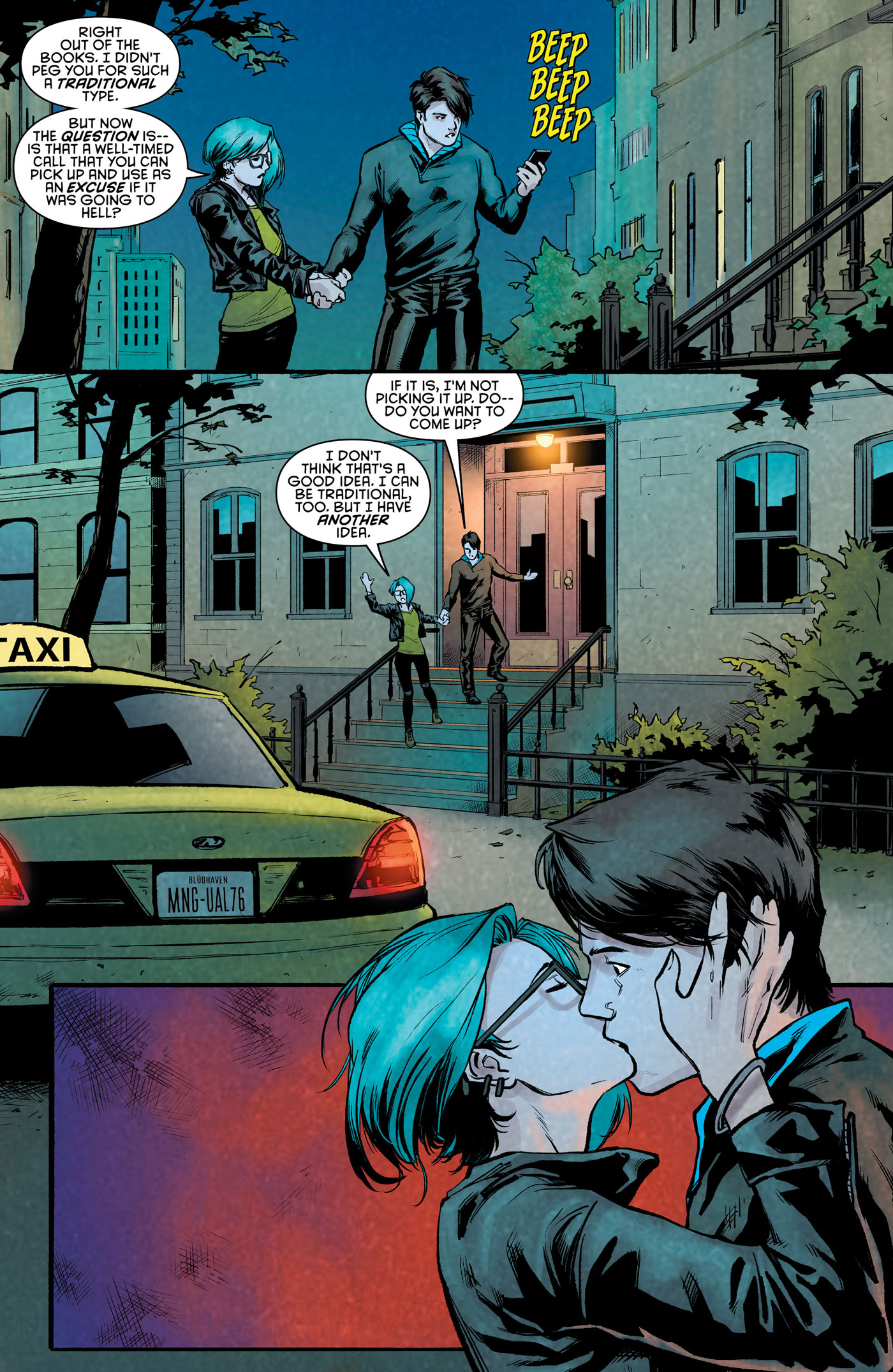 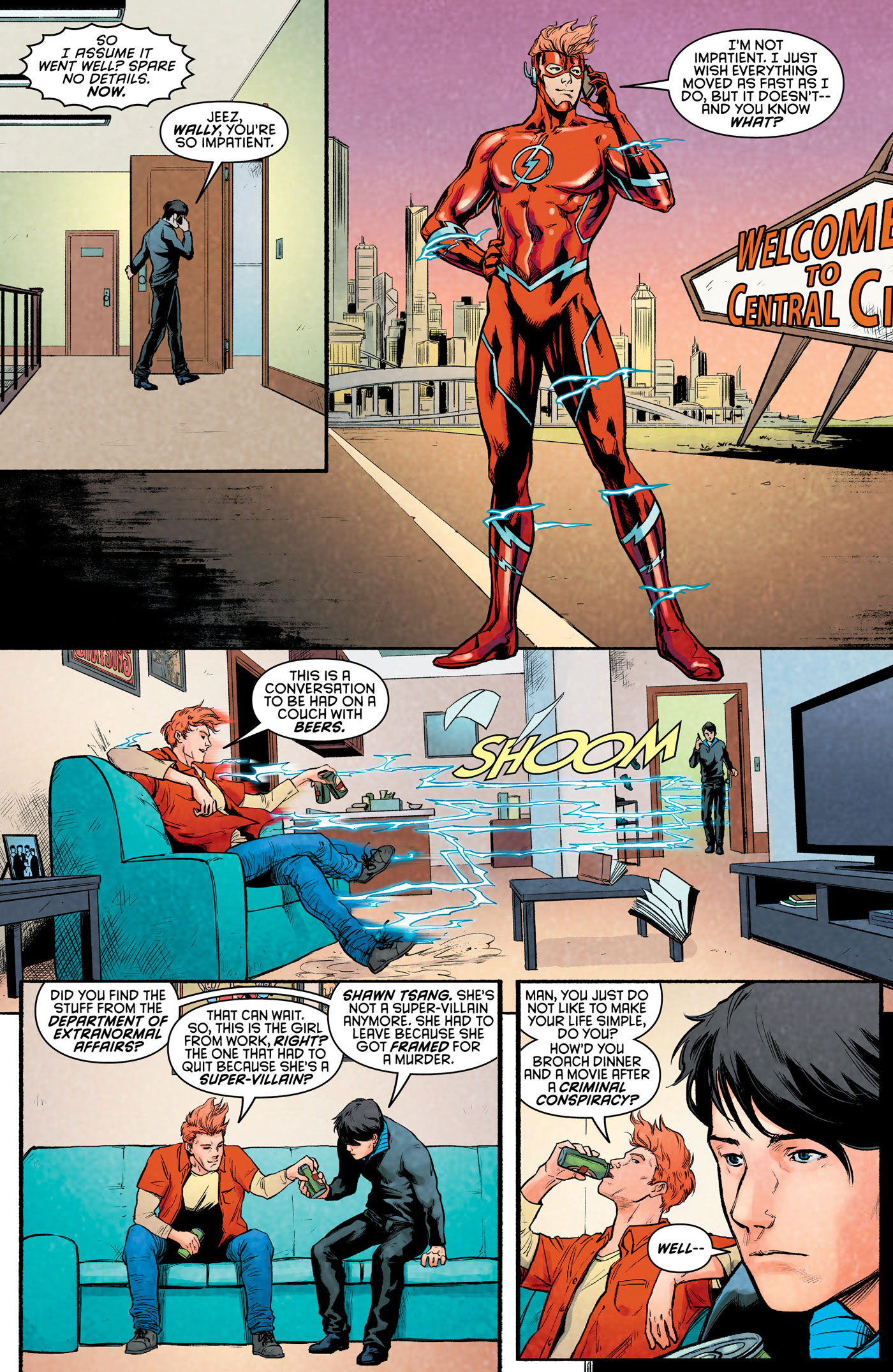 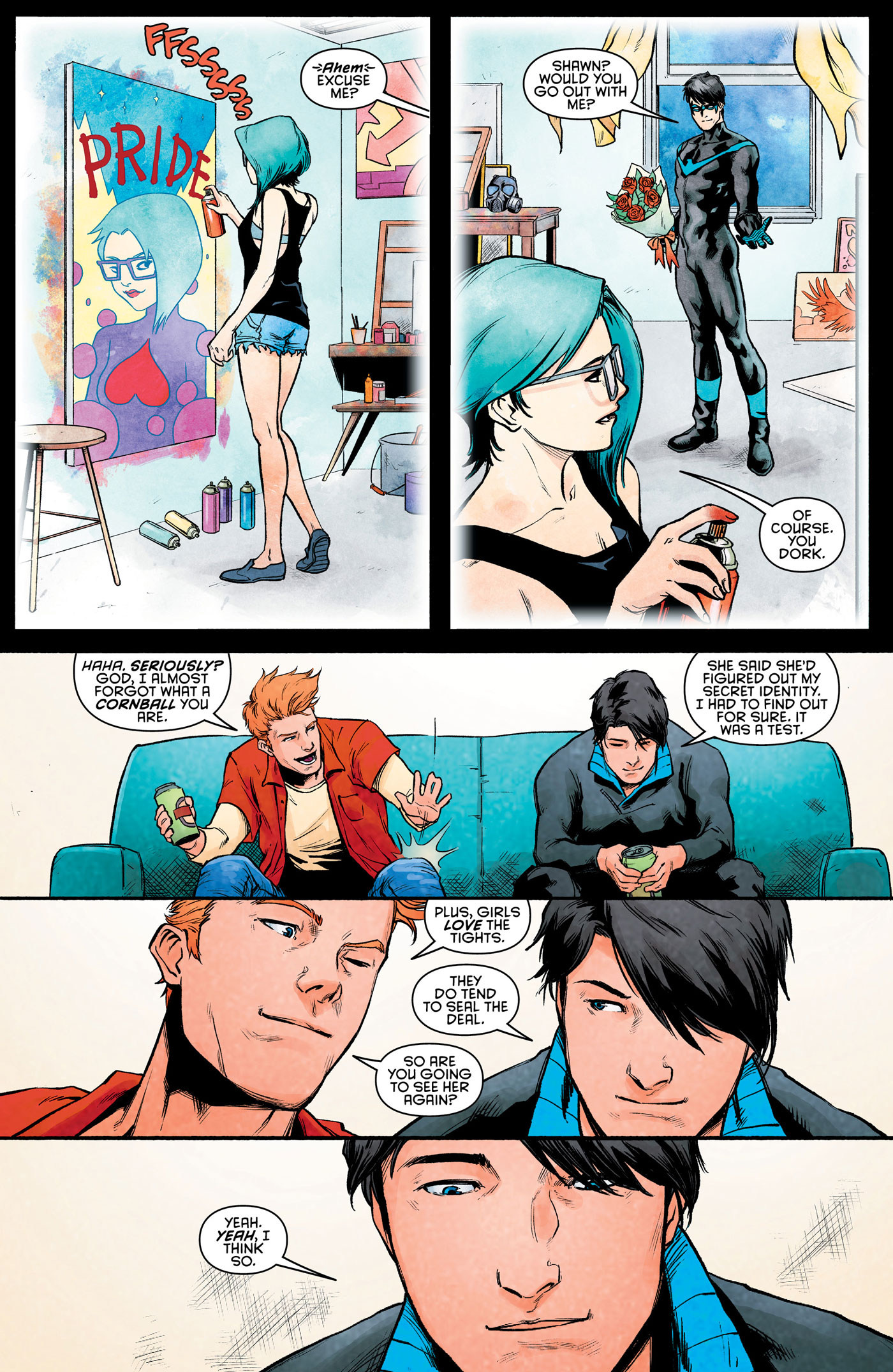 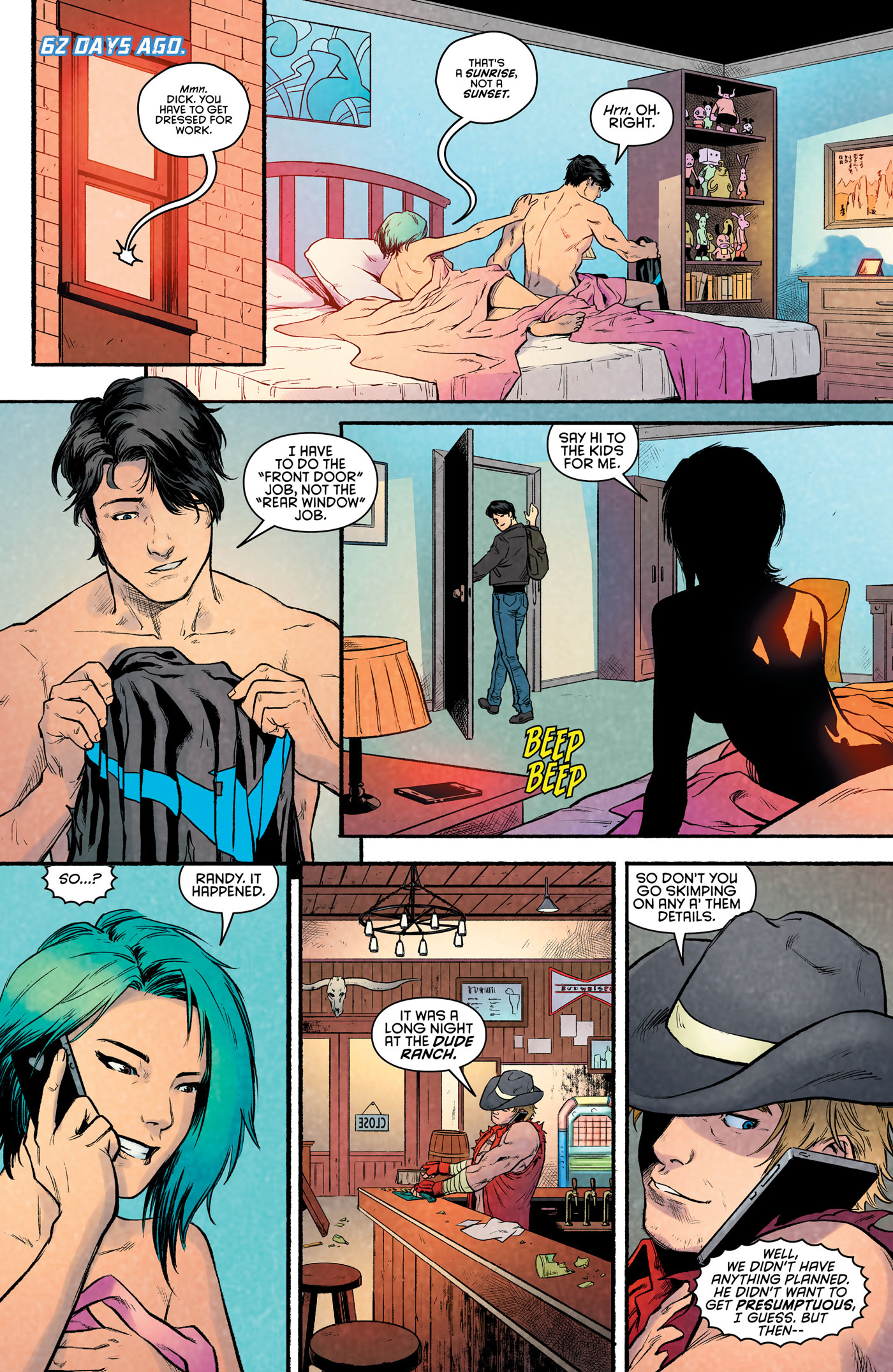 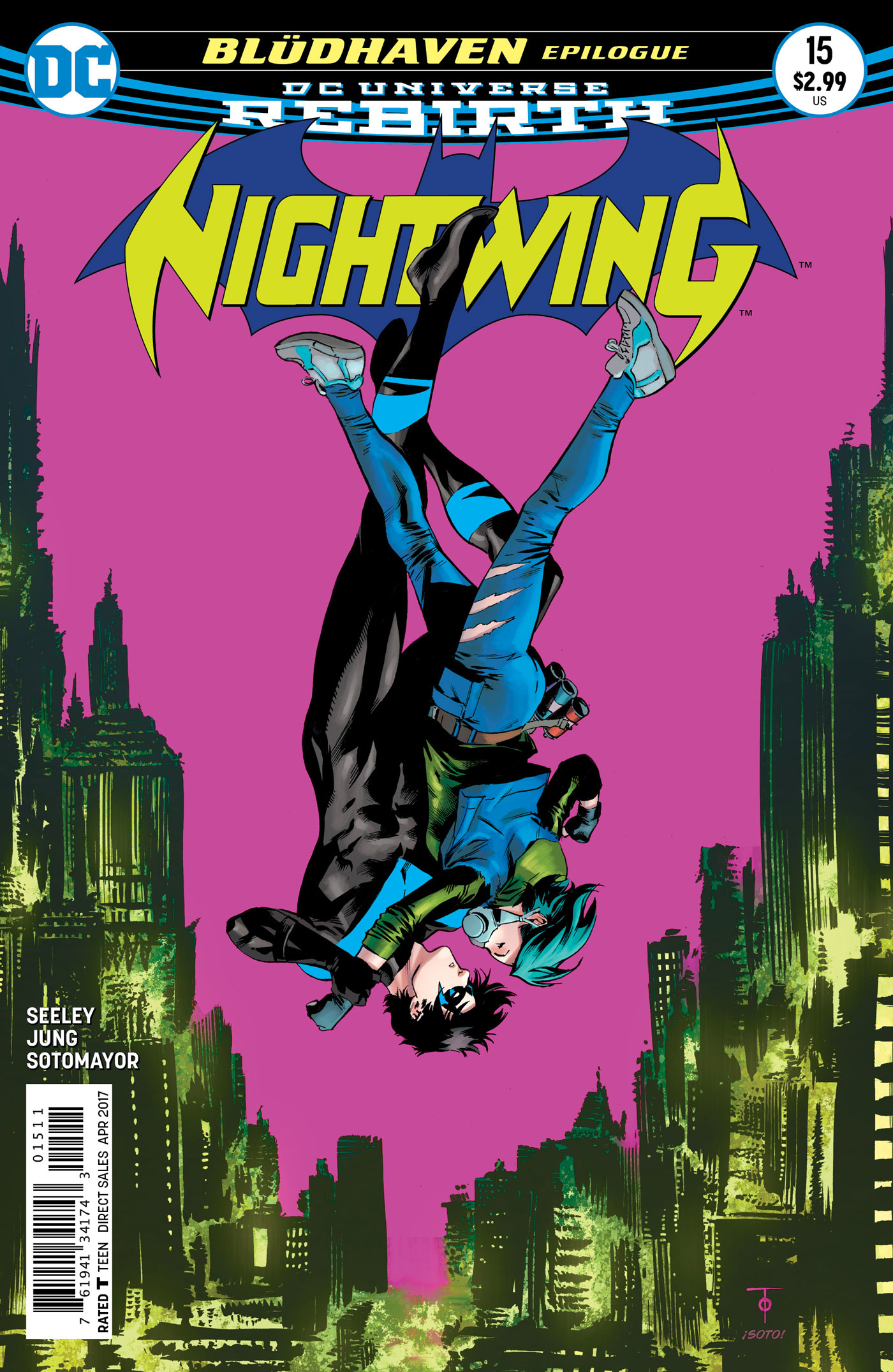 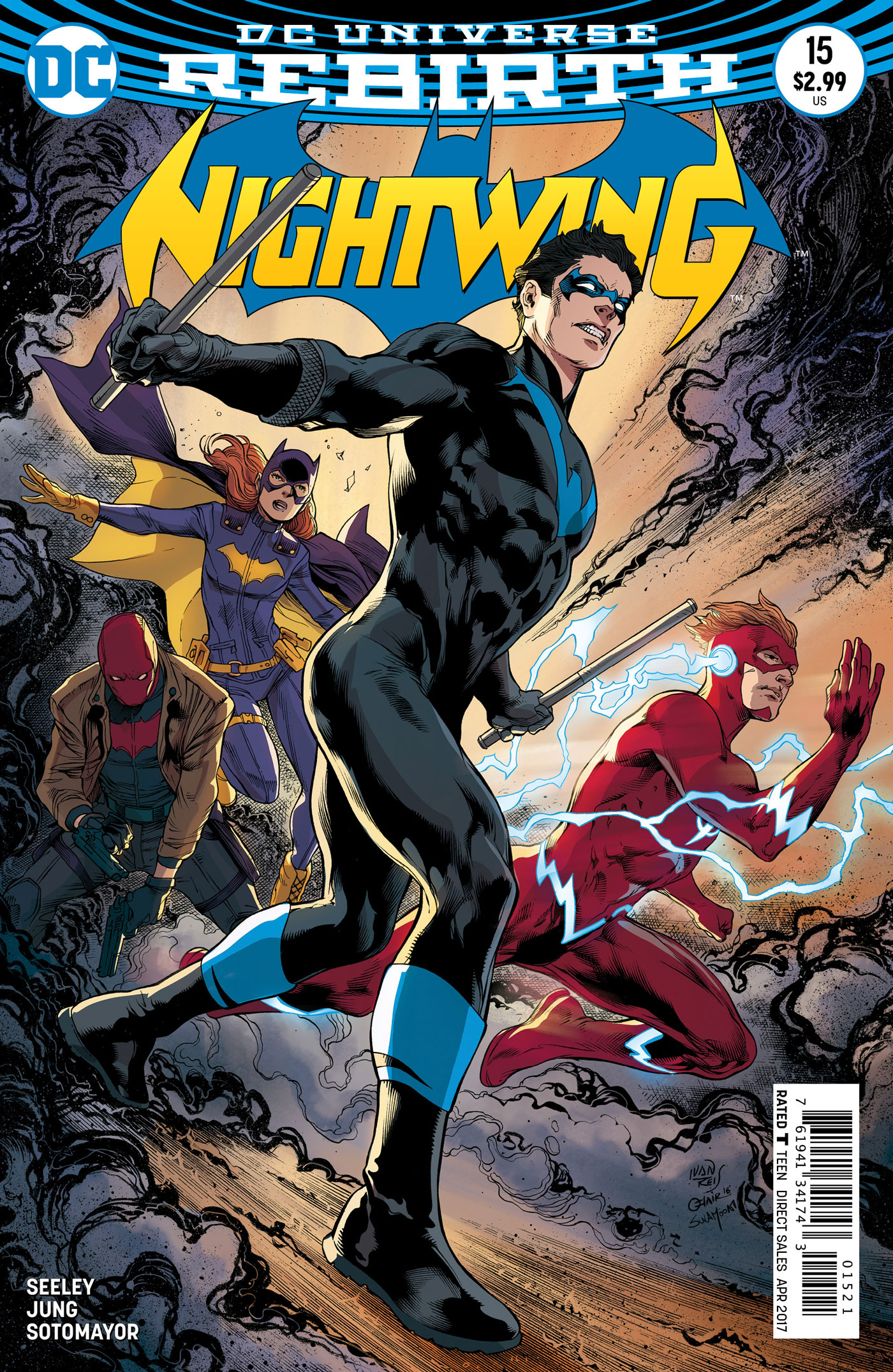 Back to the story of the issue, it was slightly predictable. Was this a problem? Not in the slightest. I kept thinking maybe Seeley was setting up the obvious ending so as to provide a twist and throw everyone off, but no such twist appeared, and I was almost more shocked to see the ending I expected rather than one I didn’t. I wasn’t sure if the epilogue for this “Blüdhaven” arc was going to lead into the next one, but I really enjoyed the fact that it did. The writing in this issue was some of the best I’ve ever seen from Seeley. It was heartfelt and romantic and… real. I really related to Dick in a lot of ways, which I assume was the purpose, as he has a nice fourth-wall moment nearer the end of issue that sort of hangs a lantern on this.

My tale of romance is almost over. And maybe you’re thinking…that was pretty breezy, Dick. Where’s the stakes?! The tragedy? I get it. Because heroes in stories represent us all. All of us relate to what it’s like for people we love to be caught in our own conflicts.

Honestly, that is dead-on to what a comic is – to what any kind of art statement is. We project onto these characters in order to make our everyday problems seem manageable, and this is why – as a “fully functioning” adult – I still purchase new comics every week and stay up late reading them by the light of my bed side lamp. To see Seeley address it with Nightwing – arguably one of DC’s most relatable and interesting heroes – really hit home, and it’s because of this, along with the other various points I brought up earlier, that I cannot fault this issue. It made me feel things; spotting the Easter eggs, noticing the artist from previous works, the dialogue, the execution, everything. I don’t think I’ve ever had this much fun reading a comic, and that’s not something you get every day.

Seeley really stuck the landing with this “Blüdhaven” epilogue issue. The execution was some of the best that I’ve seen in recent times and the set-up for the next arc felt meaningful and not shoe-horned in. I am undoubtedly more excited than ever to see what comes next from Seeley and his team.