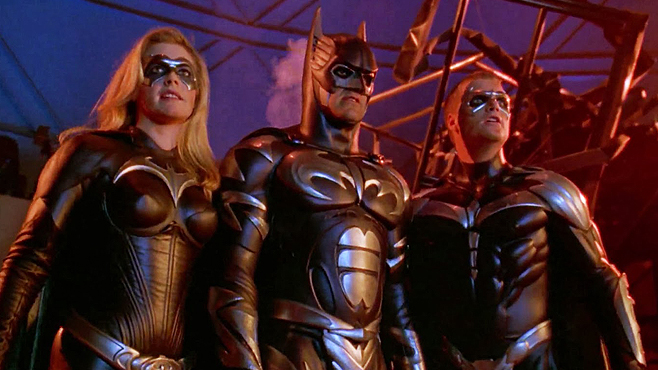 As Batman fans, we have been blessed with many great iterations of our beloved character.  Batman: The Animated Series, Batman (1989), and The Dark Knight Trilogy to name a few.  But to go along with the good, there have also been some bad.  Enter Joel Schumacher.

While personally, I believe Batman Forever is a pretty decent Batman film, it doesn’t hold a candle to the Nolan trilogy or Burton’s first Batman film.  I also feel it gets unfairly lumped in with Schumacher’s second Batman fi…er…toy commer….um…abomination, Batman & Robin.

Mention the name Joel Schumacher to any Batman fan and their minds will automically go to bat-nipples, questionable shots of Batman putting his armor on, Arnold Schwarzenegger ice puns, and BAAAANEEEEE doing MONKEY WORK.

Well, in Glen Weldon’s new book The Caped Crusade: Batman and the Rise of Nerd Culture, he traces the character’s history, the rise of fandom, as well as his own life and interests.  One of the most interesting parts of his book is his defense for the Schumacher directed Batman films.

When asked to defend the Schumacher films, Weldon says:

“Okay, he was taking the gay subtext that people had been picking up on forever and just turned it up to 11.  That’s all he was doing.  It was all there.  I would say that the Batman that carries a credit card that says Batman on it, that has an expiration date of forever – which, you know, is awesome – that goes to gala fundraisers and has ice skates that pop out of his boots and nipples on the costume, that is as valid a version and has as long a history as brooding Batman.  You need to acknowledge that this character isn’t one thing.  He is many things to many different people.  While those movies were godawful, they were at least leavened by a sensibility that wasn’t quite camp, because camp didn’t really exist in the same way that it did in the ‘60s.  Camp was harder, queerer, a little bit more defiant, and so you get Bat nipples.  That bat nipples are a joke.  The Bat nipples are an explicit joke on Rambo, First Blood, Commando, and this muscular Schwarzenegger-ization of American masculinity.”

This is a great point by Weldon, when he says Batman is a lot of things to a lot of different people.  Batman isn’t just a dark, brooding, creature of the night.  Sometimes he’s fun and happy like Adam West’s version.  After all, the film version of Batman has become less and less kid friendly as the years have gone on, but children need their Batman too.  Otherwise, how would we get a new generation of Batman fans?

“My Batman” is pretty much the Batman from Batman: The Animated Series, since that’s the version I grew up with and was introduced to the character from.  But if I showed that to a five year old today, they might think it’s stupid and outdated and that the Brave and the Bold Batman is the best.  It’s all a matter of preference and taste, and that’s all Weldon was saying about the Schumacher films.  But we can all agree, Batman & Robin is still an awful film.

In the interview, Weldon also talks about Affleck’s Batman, Batman fandom, among many other things, which you can read here.

Are you a Schumacher Batman film fan?  Like I mentioned earlier, I enjoy Batman Forever and can regularly watch it, but never Batman & Robin.  With so many variations of Batman, which is your favorite?  Let us know!