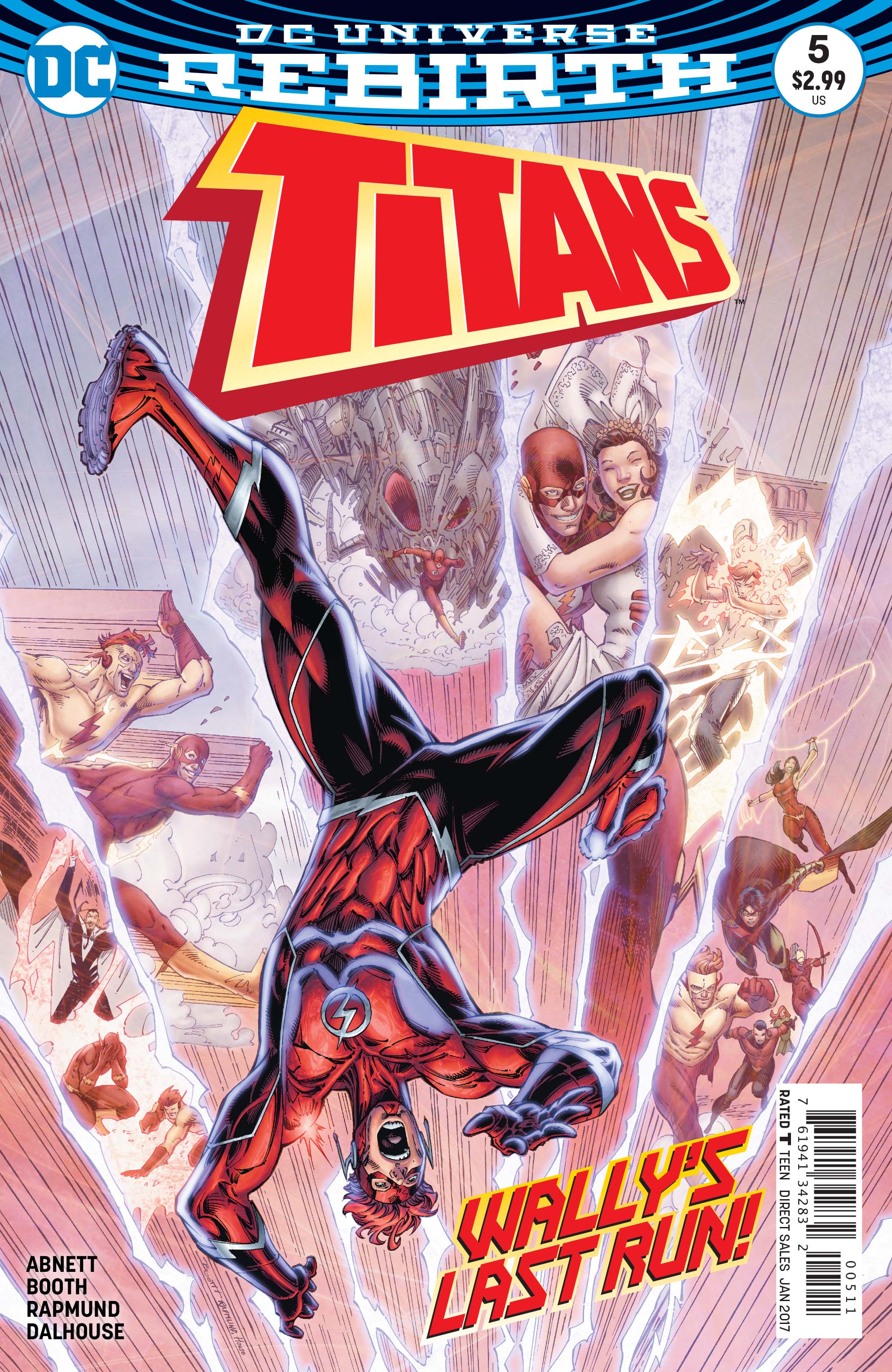 “The Return of Wally West, Part 5: Run for Their Lives”

Writer Dan Abnett and artist Brett Booth created an entire issue revolving around Wally West and his dilemma of saving the Titans from Kadabra’s machinations without going to fast, lest he be lost into the speed force.

Abnett allows readers proper time to fully grasp the seriousness of Wally’s predicament. He has the power to save his friends, but he also runs the risk of losing his physical coherence and disappearing again. The biggest strength of this issue is that it does not follow the usual structure that Abnett used in the previous issues of Titans, where they have a battle, then go eat pizza and talk about their friendship. I have previously complained that it was repetitive and a little cheesy how often Abnett kept on reinforcing how the Titans are best of friends and that friendship is thicker than blood, and blah, blah, blah. 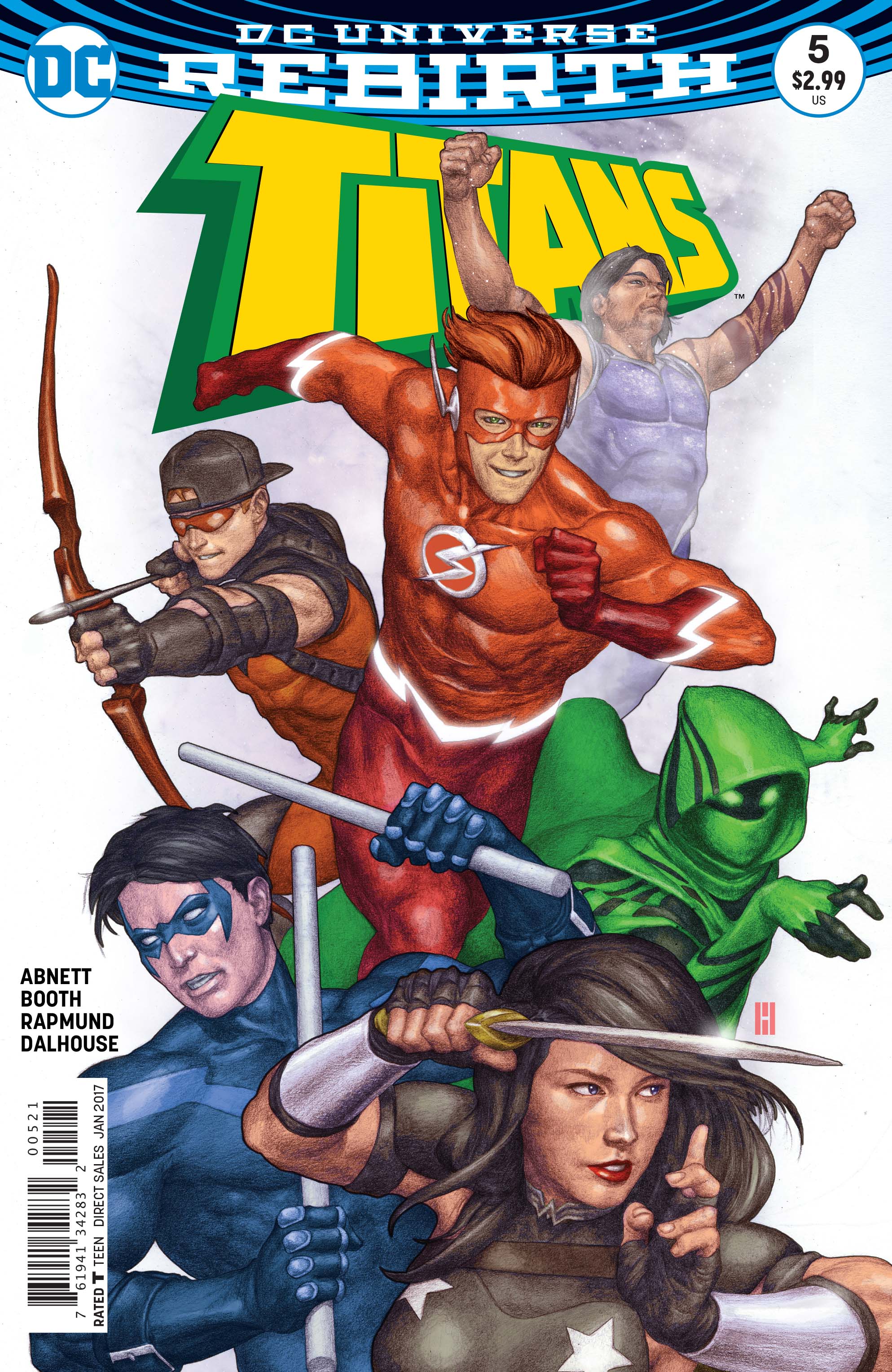 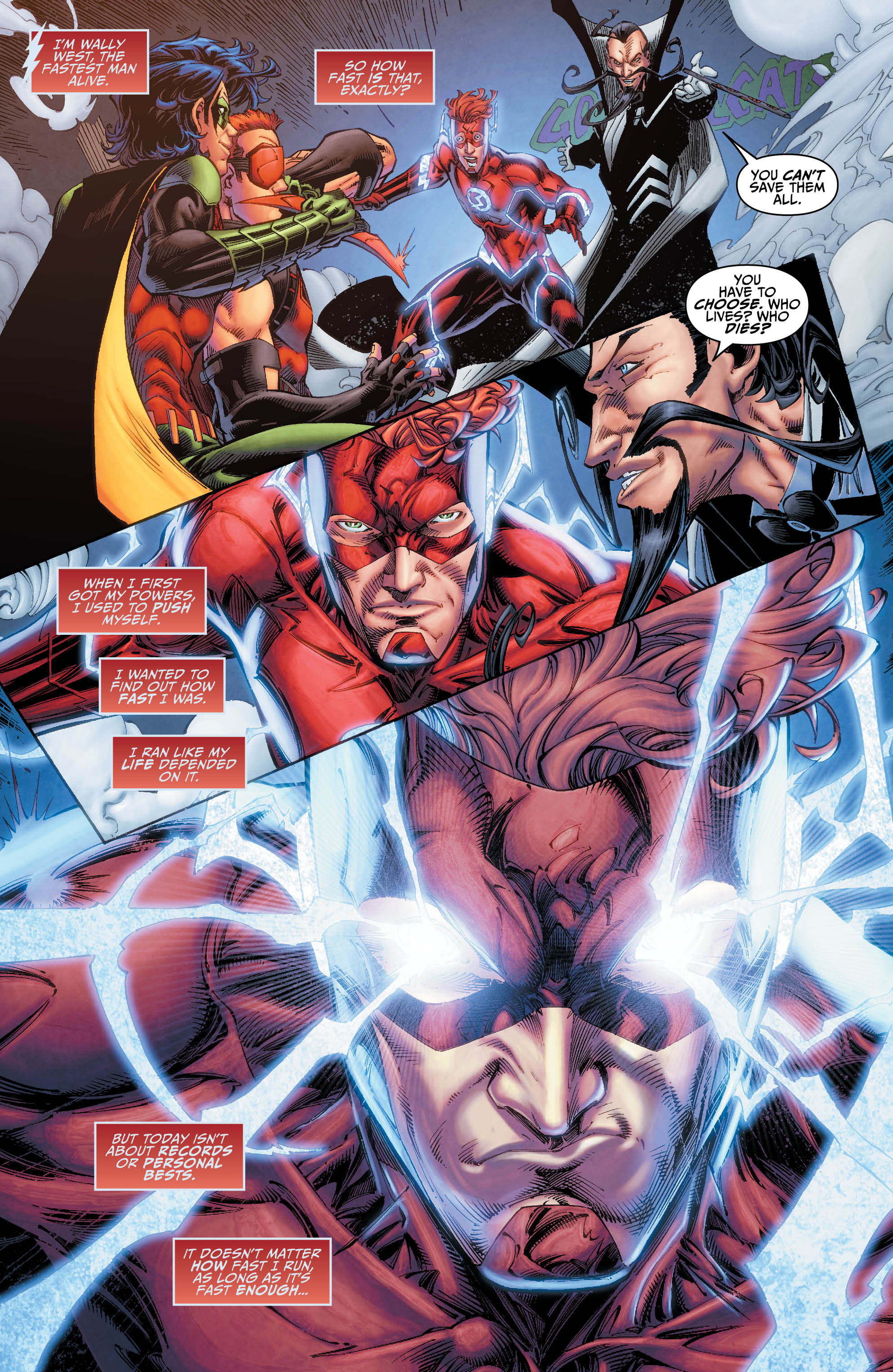 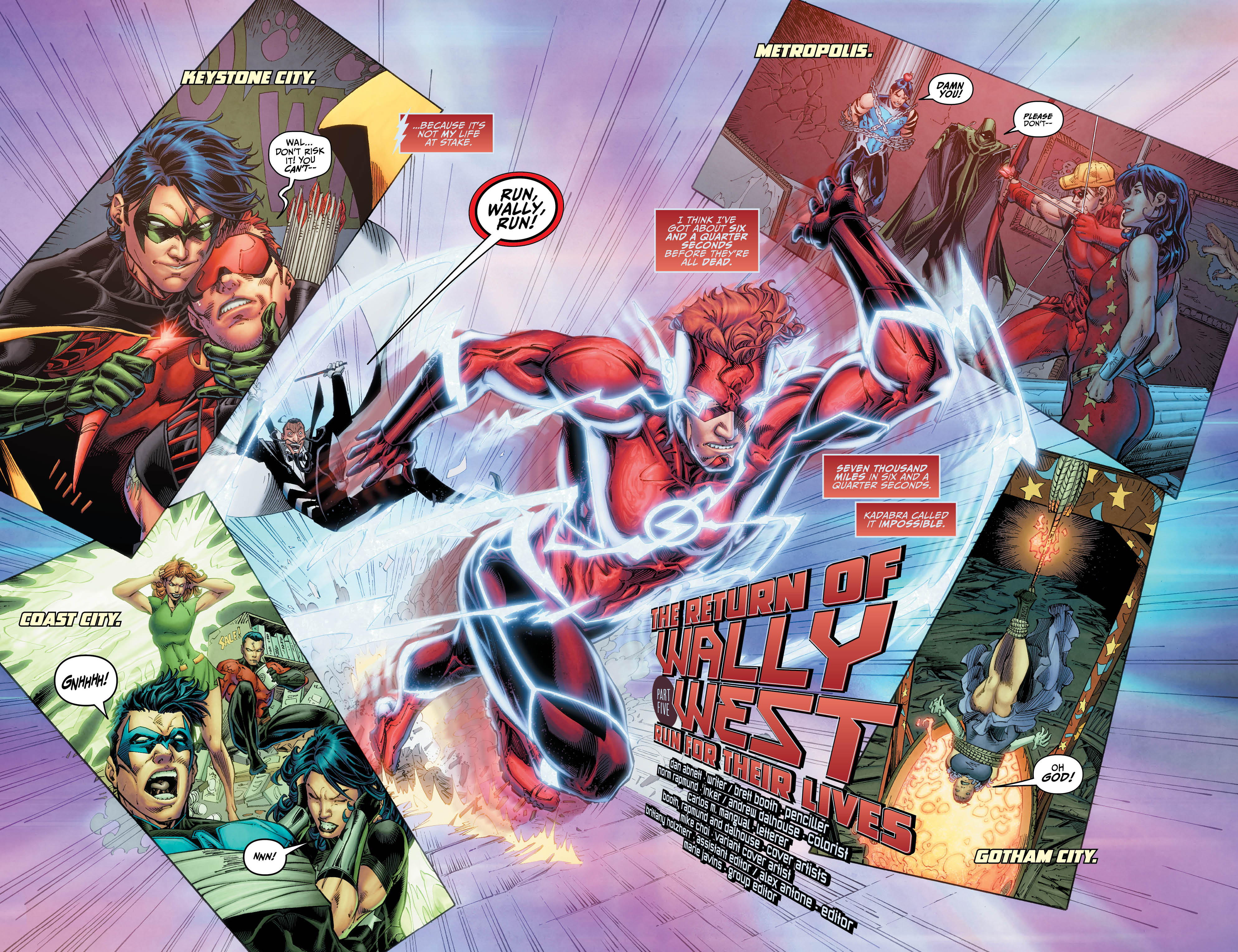 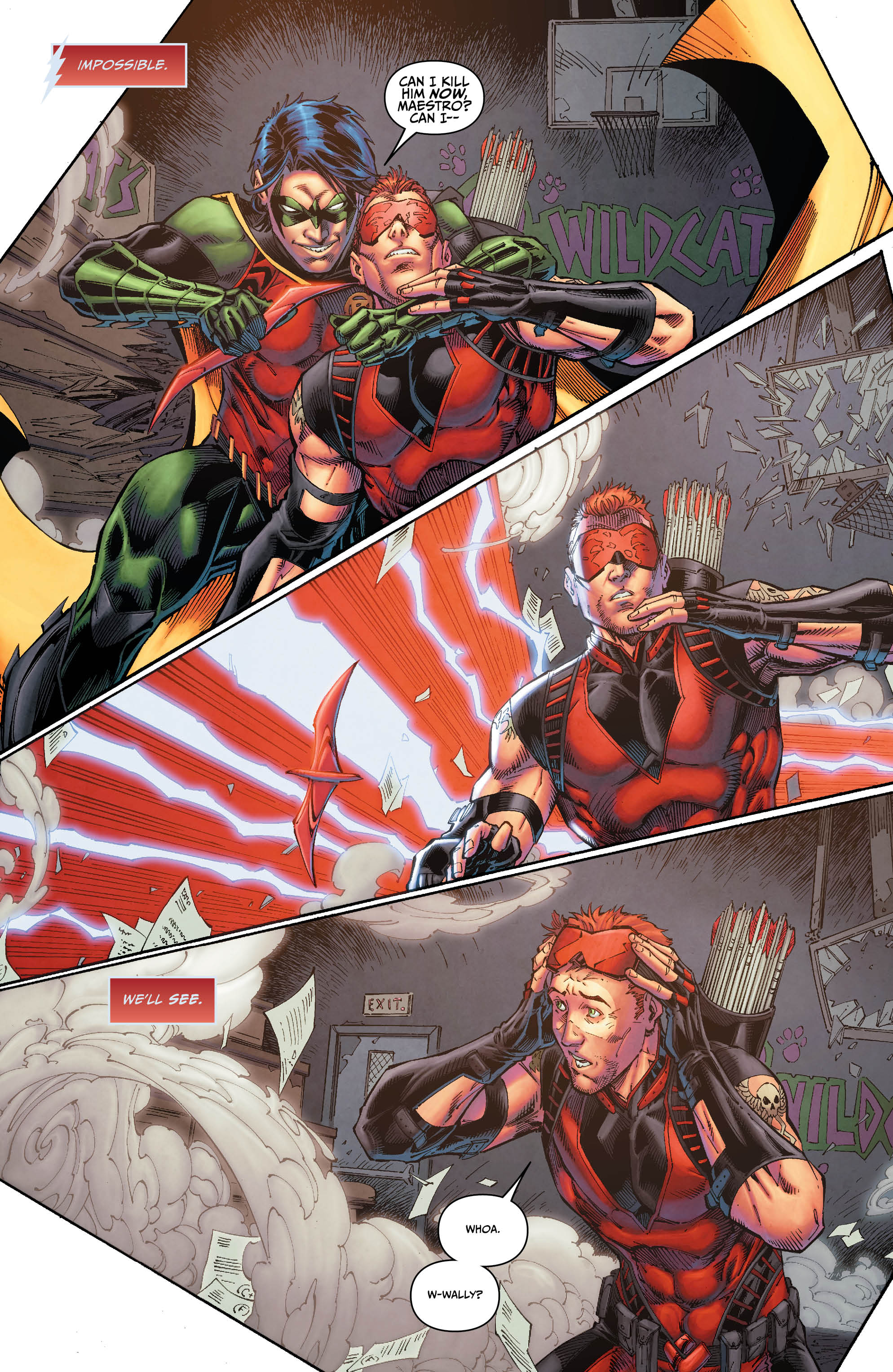 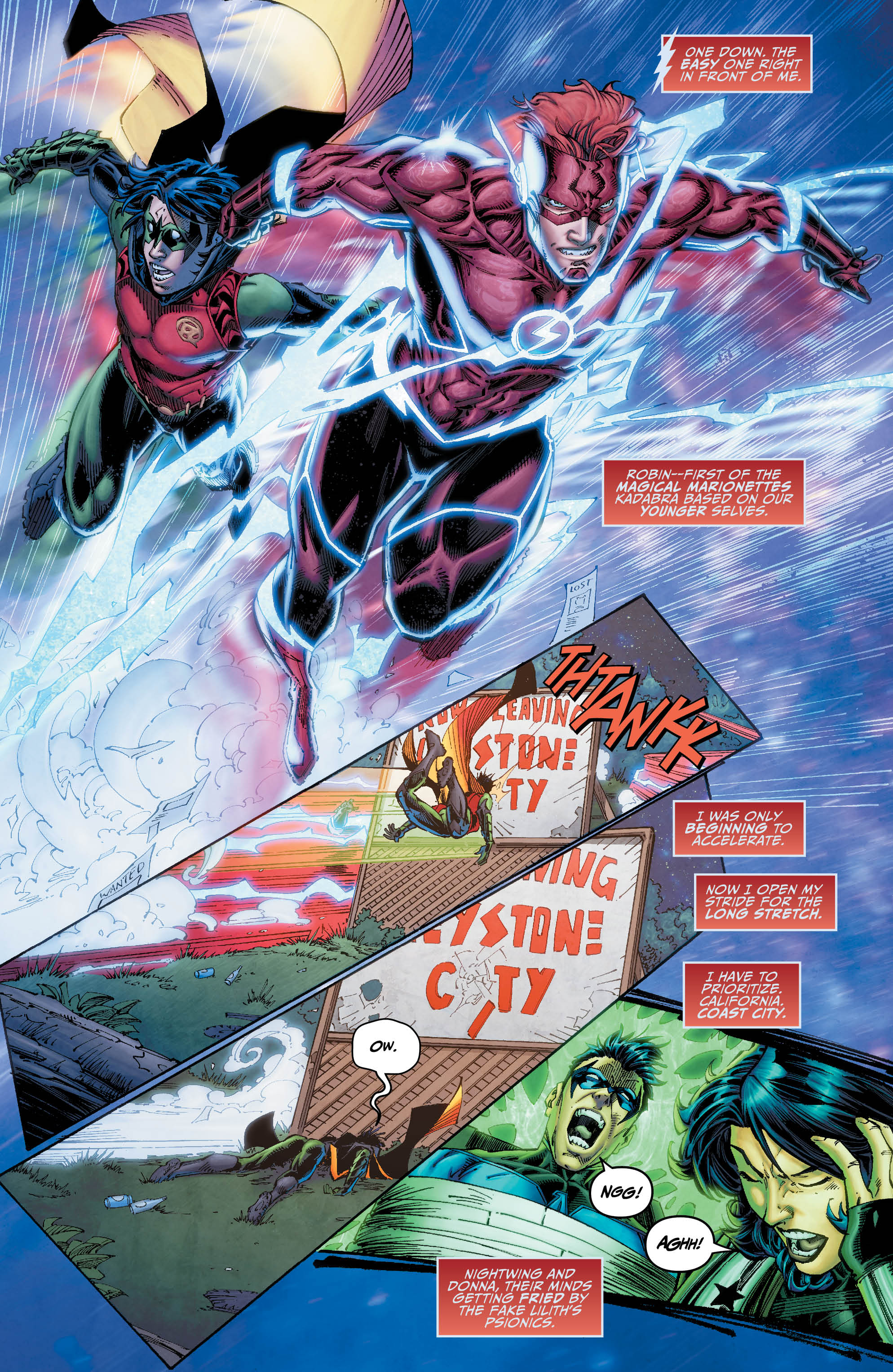 This issue throws that stuff out the window. It takes place in the span of six seconds and those six seconds are packed with more drama and pathos than all of the previous four issues. The reader is constantly torn between Wally to saving everybody and being scared for him. Kadabra also gets more character development that makes him much more interesting than I previously gave him credit for.

Even the Booth’s art did not bother me as much this issue. Booth continues to drawing those slanted panels, but this time it is appropriate for the story. His panels implies the level of speed that Wally is running at, making the story more exciting and fast-paced. Some of Booth’s figure posing are awkward and Kadabra still looks absolutely ridiculous, but his flashy, energy-filled art is an asset that serves the story and not a deterrent.

A minor complaint about the issue is that the story arc pacing is ironically slowed down in this issue. There were subplots that Abnett put on the back burner in favor of focusing on Wally. And as much as I love Wally, the Titans were barely a presence in their own books. I don’t think any one of them got more than two lines of dialogue beyond “Please don’t…” or “Aggh!” It could have benefited from more action from the other Titans or a scene to advance one of the book’s subplots.

The current issue of Titans was fast-paced, character-driven, and appropriately emotional. The lack of action from the other Titans and the still-shaky art brought the score down a little, but this issue may be its strongest one yet.