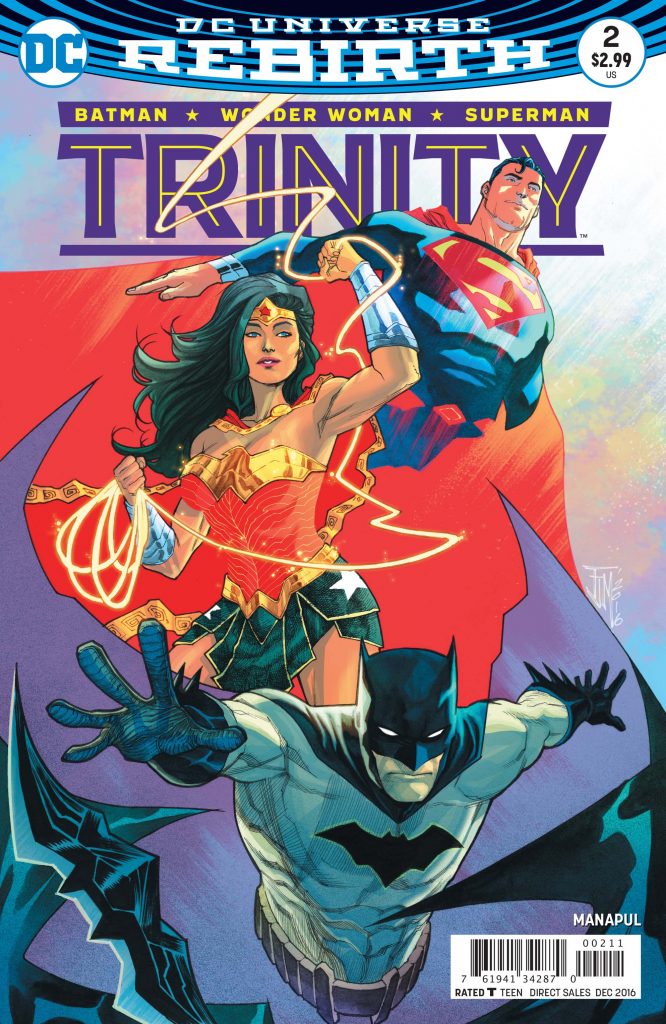 Francis Manapul continues his “Better Together” storyline with a time-bending journey to Smallville in Trinity #2. The titular heroes have been transported to the past – somewhere or somewhen – and find themselves on Kent Farm.

Trinity #2 ebbs and flows between the present and past.

Superman is taken aback by what he sees – himself, as a youngster, and his deceased father, Jonathan. As someone who lost their father too soon, I often imagine what it might be like to converse with him once again, to share a laugh, to reintroduce him to his grandchildren, to tell him I love him. Whatever this is, wherever they are, Clark is understandably drawn in.

At the same time, he realizes the danger of butterfly effect – interacting too much and forever altering his reality. Jonathon Kent is a devoted father and in equal measure both awestruck by his son’s power and fearful of those same powers drawing attention and Clark being taken away. I found the dialogue between father and son touching. Perhaps it is because of my personal loss, but I sense this father-son dynamic will have universal appeal. Clark speaks to Jonathan, who has been grilling him for answers on how to raise young Clark, and delivers these poignant words: “You don’t have all the answers, and you don’t need them. Everything you’ve experienced, and everything you are…that is all he will ever need.” 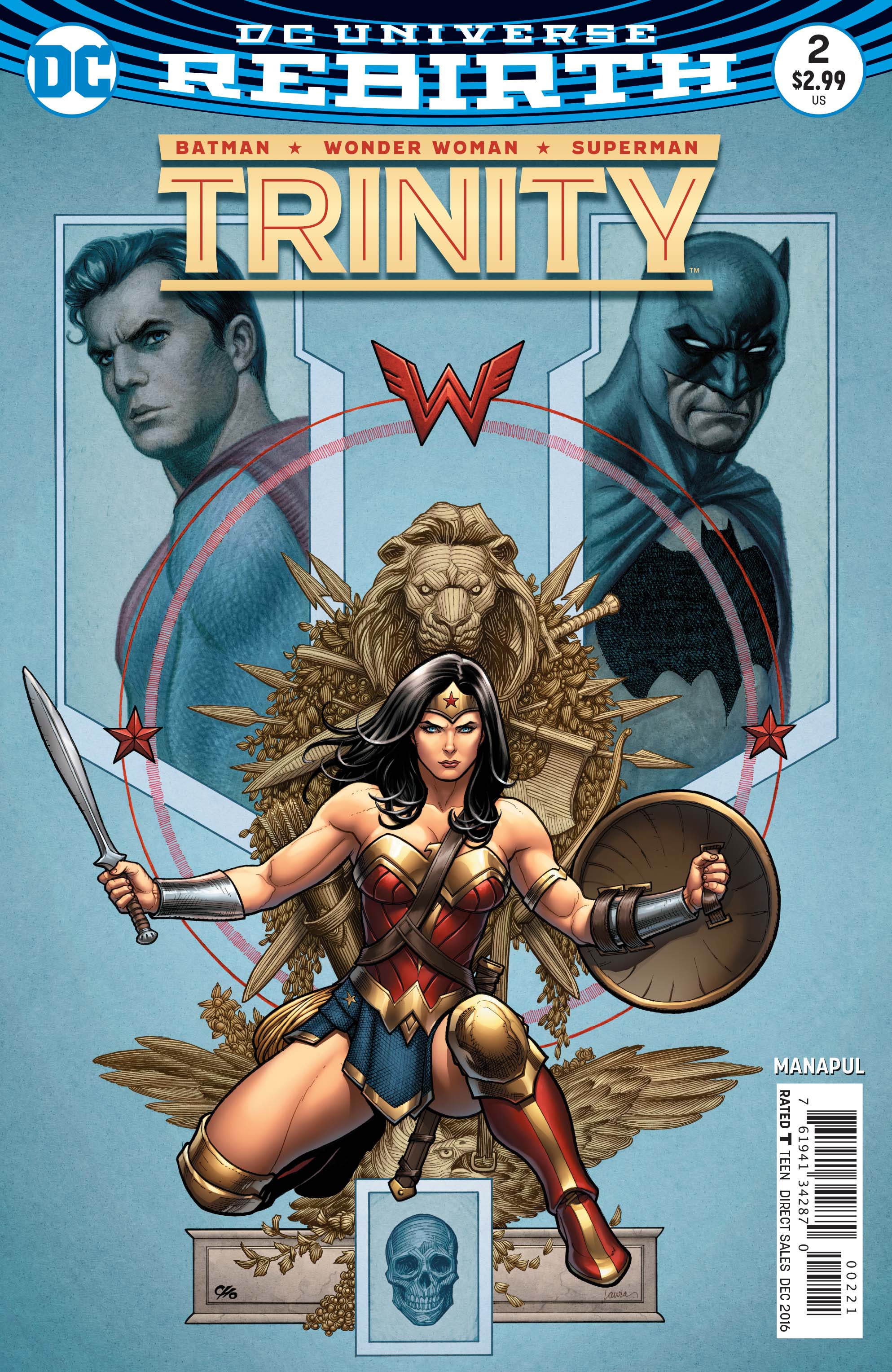 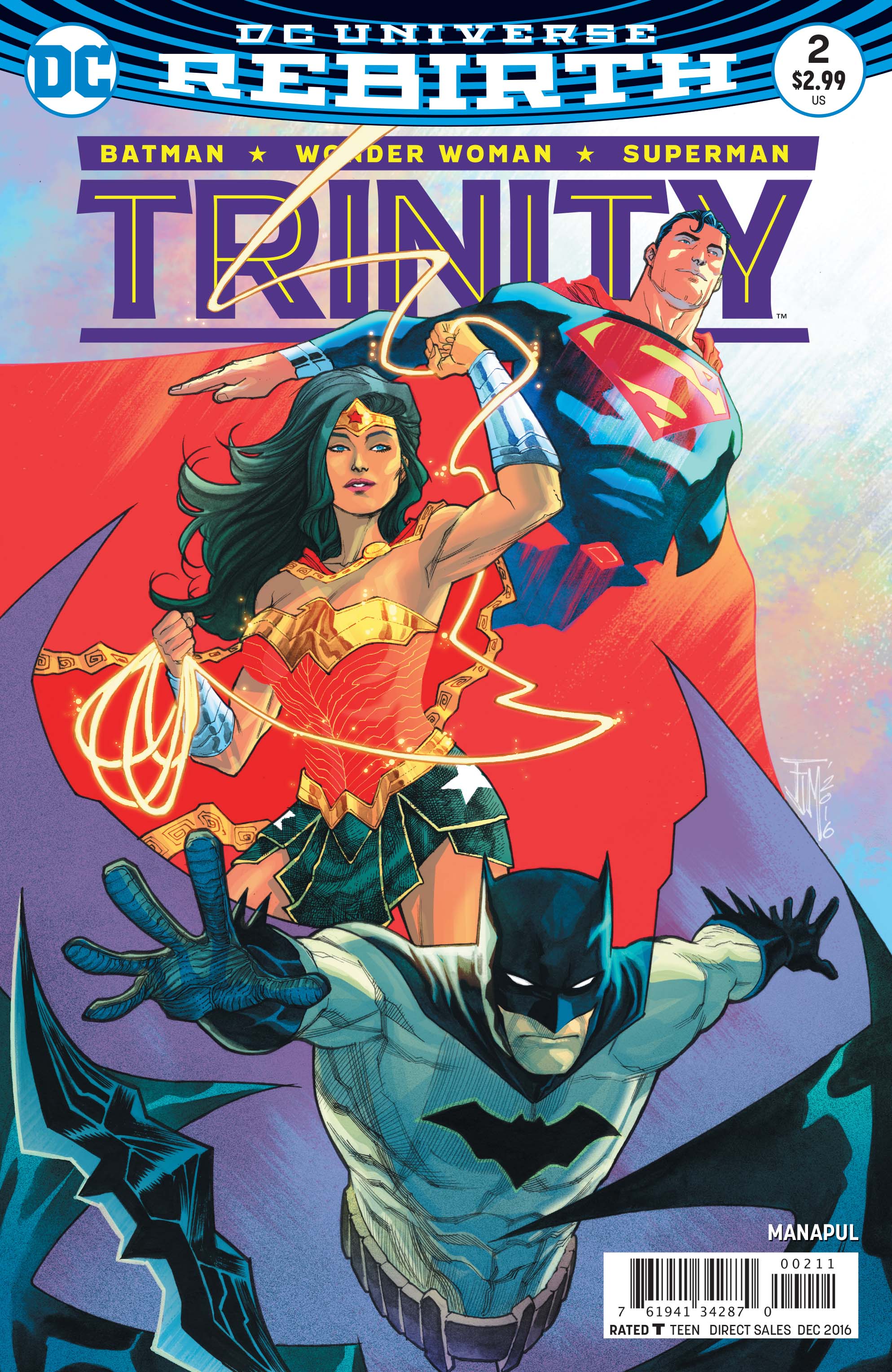 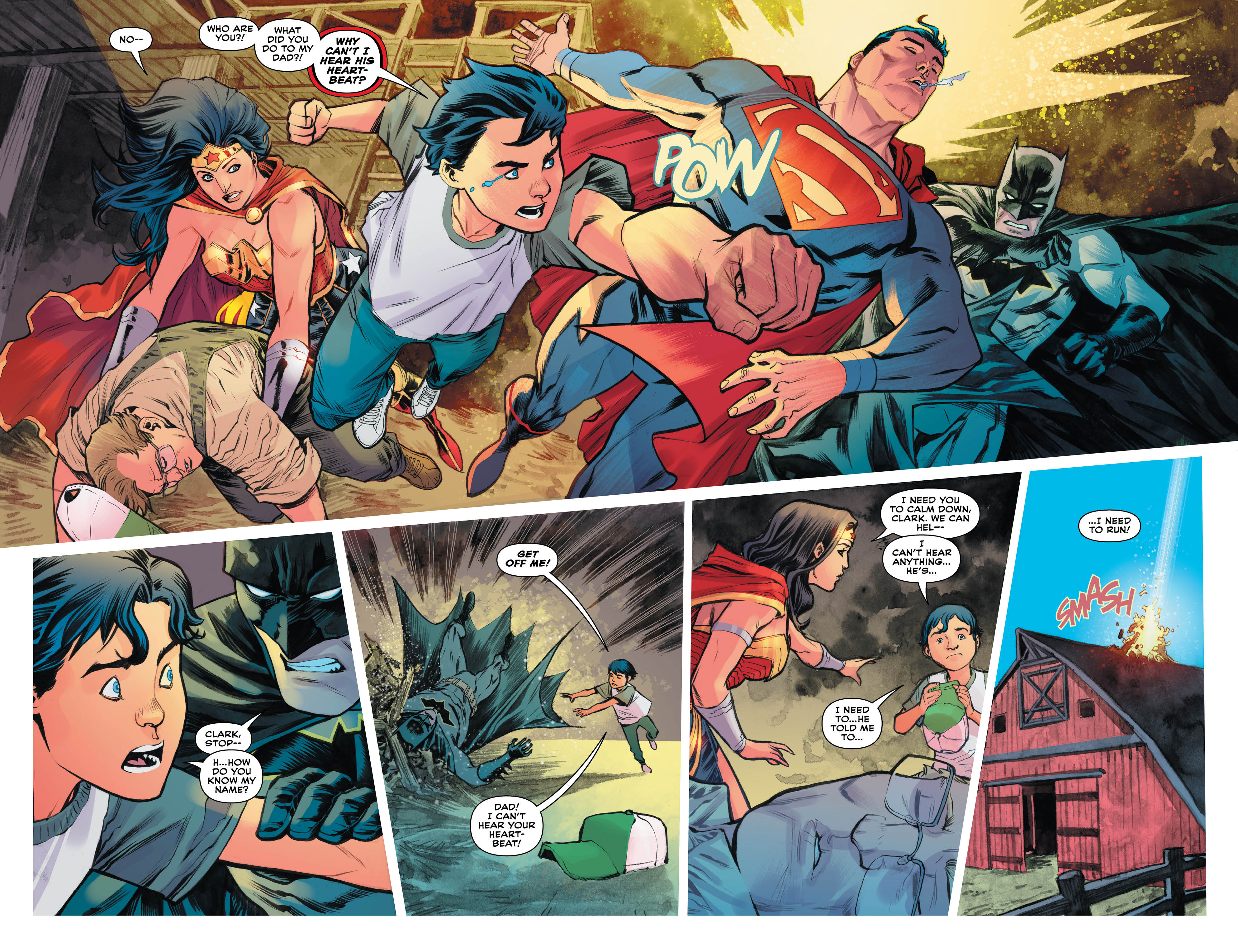 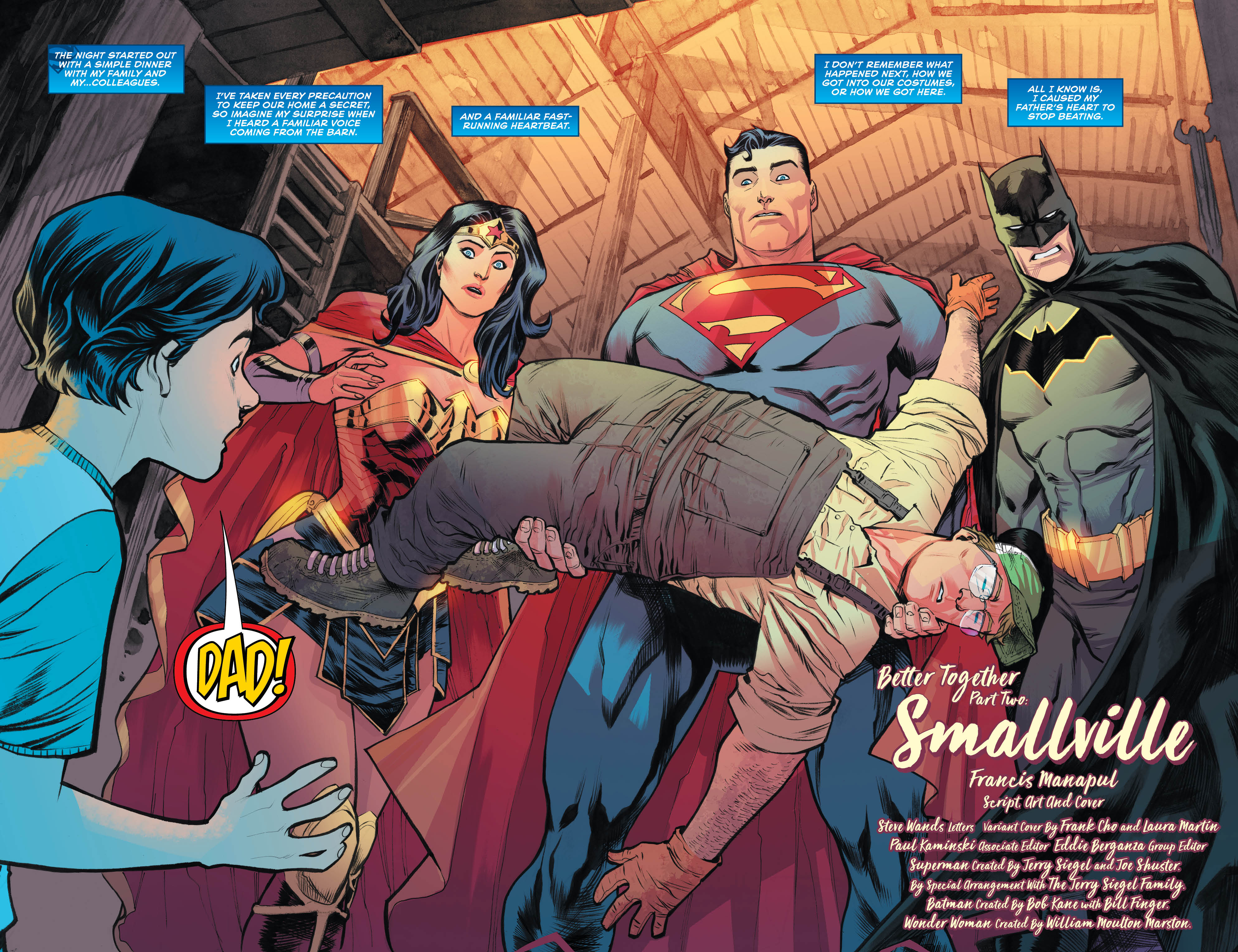 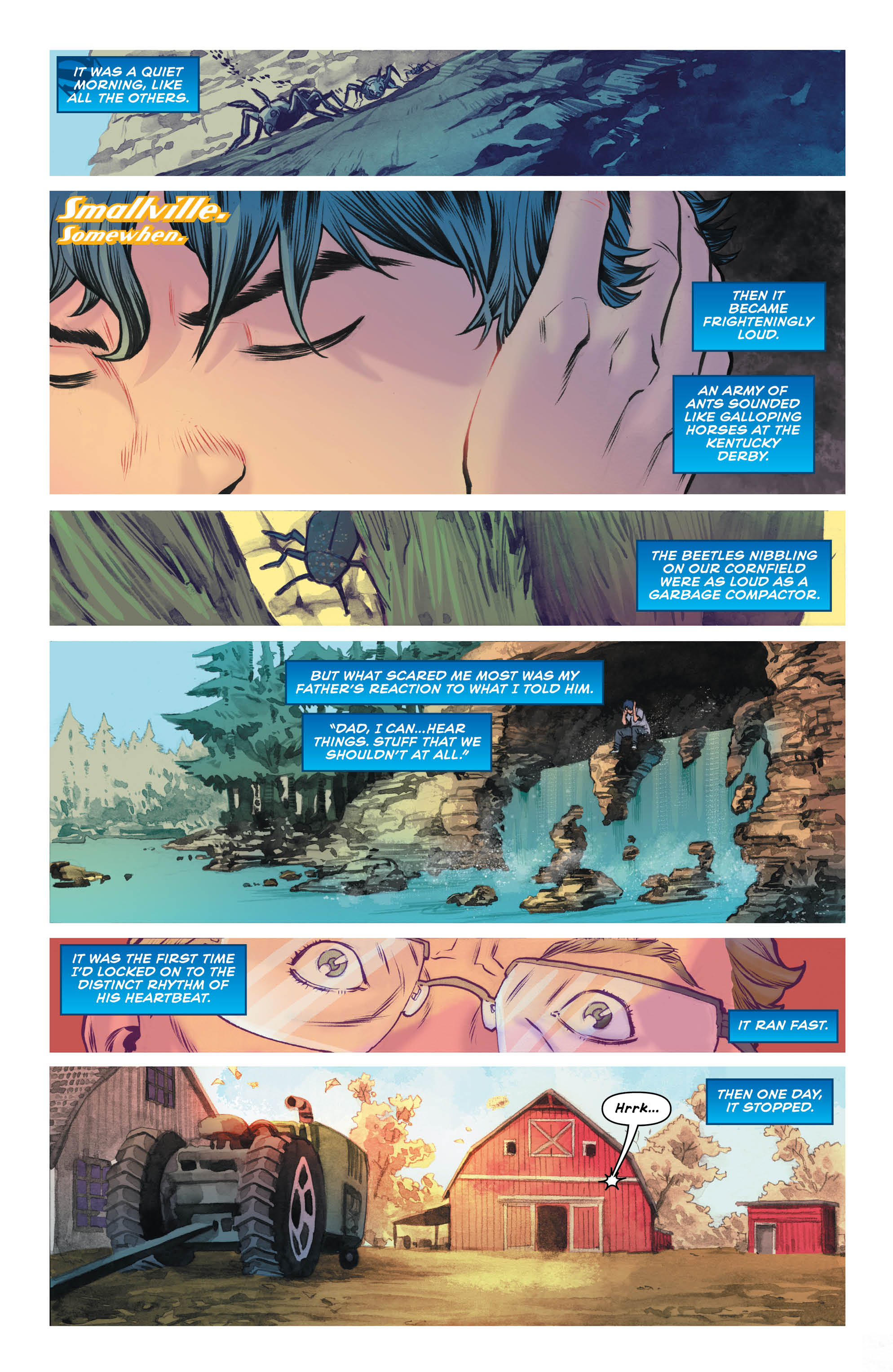 Batman, however, knows something is amiss. Ever aware, Bruce warns Superman of the dangers of even the slightest interaction. Soon, Batman’s fears are realized, but in a much different way than initially thought. Wonder Woman is a more understanding voice, recognizing and allowing space for the emotion Clark must be going through. Thus far, Trinity has only scratched the surface of each character’s development. I am looking forward to seeing how Manapul delves deeper in upcoming issues.

The story takes an interesting turn at the end, with a surprise appearance from a fan-favorite character. This twist is bound to have all sorts of interesting implications. However, readers are left with some level of intrigue at the mention of another, still mysterious rogue.

The art in Trinity #2 continues to impress. The panels have an enjoyable, water-color feel. This is especially noticeable in the most pleasant, sun-drenched scenery of Smallville, Kansas. The setting gives opportunity for brightness and shadows that add depth to the panels. Each character is depicted gorgeously, with subtle shading capitalizing on the effortless blending of water color. The whole issue is beautiful. I was caught up in the story and loved the look and feel of the panels.

Next up is: “Murder in Gotham,” which leads me to believe each character will be led through a version of their past to explore their identity and, perhaps, to gain some sense of closure? If my hunch is correct, I would welcome this storyline and look forward to where Francis Manapul takes these characters.