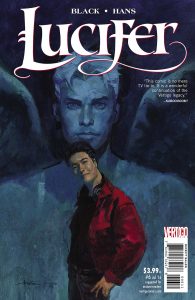 It’s not unheard of for comic books to do a one-off story or something of that nature following their first arc and it seems as though the latest volume of Lucifer has elected to go that route. I felt the first five issues were a pretty good start to Morningstar’s newest exploits, but this one takes the title in a completely unexpected direction and the result is a mixed bag.

First, I would at least like to throw up the horns to Stephanie Hans, who provided what I believe to be the most stunning artwork on the series to date. I’m not lying when I say that it’s nearly indistinguishable from the cover art and may be worth the price of admission alone.

As for the story itself, Holly Black introduces us to a young man name Takehiko, who is dating a gal named Rosemary and is soon introduced to her parents, who happen to be Satanists. Well, not the kind talk shows warned us about in the 1980’s, but more so a hybrid of those who read books by Anton LaVey and the sect recently seen on Fox’s TV series. The young couple is shadowed by a mysterious figure throughout that has ties to both Rose’s parents and the Satanic Church featured.

Aside from the fact that the titular character is completely absent, this could have functioned as a one-off, yet it likely has repercussions on future issues. Personally, I thought the story flowed well until the final pages. Not only will you see the twists coming, the narrative felt a bit rushed and I would liken the ending to that of a poorly edited movie.

I’m well aware that this is not a TV show tie-in, but it does exist because of it (the current run, that is). Considering that, more eyes than usual will be reading and I hope the creative team puts their best foot forward from here on out.

OPINION: Regarding Those Rebirth Leaks (No Spoilers)