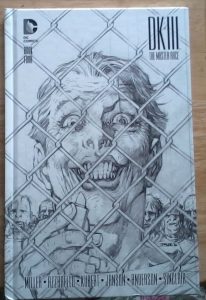 A few weeks have passed since the initial release of DKIII # 4 and it can now be purchased in hardcover format. Sporting some gorgeous pencils from the one and only Jim Lee on the cover, this is something no die hard Dark Knight collector will want to pass up.

While I’m not going to reiterate my thoughts on the story itself (read my full review here), I will say what this particular edition certainly looks more handsome on the shelf. The Batgirl mini-comic is still included, only it now appears full size and follows the main story as a backup of sorts, rather than being placed in the middle. As for the Andy Kubert sketch gallery that was included in the standard edition, well, that has been unfortunately omitted.

Just in case you don’t feel like taking the journey provided by the link above to read my full review, I will at least say that my score for this issue is… 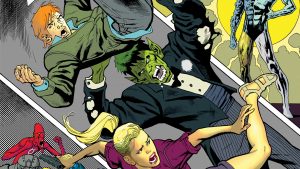 DC once again offers readers what is essentially four comics at the price of $7.99 with the latest release of the anthology series Legends of Tomorrow. Featuring tales starring the likes of Firestorm, Metamorpho, Sugar & Spike, and The Metal Men, there is no shortage of material for the comic book reader looking for a lethal dose of adventure.

Once again, I felt that Sugar & Spike stole the show with its sharp storytelling and great artwork. Just be forewarned that this book has nothing to do with the TV show of the same name.