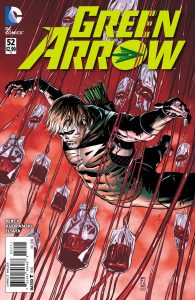 The final issue of Green Arrow’s New 52 run picks up where the last issue left off – with a dead Oliver Queen. As you may have guessed, he’s quickly resurrected by the very object that killed him: a blade soaked with Doctor Miracle’s blood. Doubly fortunate for him, he’s also been cured of the Lukos virus.

What follows is a conclusion to the jazz involving Paragon, which I probably reveled a little too much in. He is one villain that you love to see get his comeuppance. On the other hand, the situation with Deathstroke was wrapped up a little too neatly and quickly.

On that note, I would like to say to that Benjamin Percy’s ability to find the voices of both Oliver and Slade was especially superb in this issue, as was the artwork of Szymon Kudranski. The images have such a shine to them and I could see the movement they hint at. It’s stuff that would be well suited for a motion comic.

Percy does a fair job of making everything established in the past few months come to a head in the page count allotted, but he could have used a little more breathing room. This issue – and run, for that matter – doesn’t exactly have a true ending, although you will have an idea of where the next era of Green Arrow is headed once Rebirth kicks off. 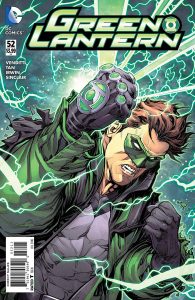 Another New 52 run coming to an end this week is that of Green Lantern’s, which has seen Robert Venditti in the driver’s seat since Geoff Johns vacated it several years ago. He, along with artist Billy Tan who thankfully came back for one last hurrah, did add quite of few things to the enduring mythos of ringslingers in that time, so I do have to tip my hat in that regard.

This issue didn’t feel all that conclusive, but did see Hal Jordan go up against the Gray Agents, who possess some pretty fresh, interesting abilities. Hal also goes full construct again a few times. Whether or not he has a refreshing wintergreen flavor remains unclear.

What is offered is a bit of a fast read that isn’t without its entertaining qualities, but could have use a little more substance. It really serves as a lead-in to Hal Jordan and the Green Lantern Corps: Rebirth #1, which will hopefully see the end of Hobo Hal and a return to his classic threads. 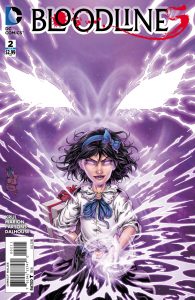 J.T. Krul really has offered up something for the DC fan who enjoys the X-Men. Bloodlines isn’t quite the same thing, but once you sit down to read it, you will understand why I made the comparison.

This mini-series captures the attitude and culture of today’s youth and believably portrays how they would react to being swept up in such an extreme situation. I will loosely compare it to how the Scream TV series finds the millennial voice as it were and soundly incorporates social media and other such things. It’s the details, really.

We see many young townsfolk manifest their powers, but the transitions between characters are a bit too quick. The only character we really get inside is Eddie, although some of this can be justified in saying that this issue was likely intended to contain a lot of setup.

Despite falling slightly short of the first issue, it remains clear that Bloodlines is a mini-series to keep an eye on. The show-stealing artwork of V. Ken Marion also provides an added boost.