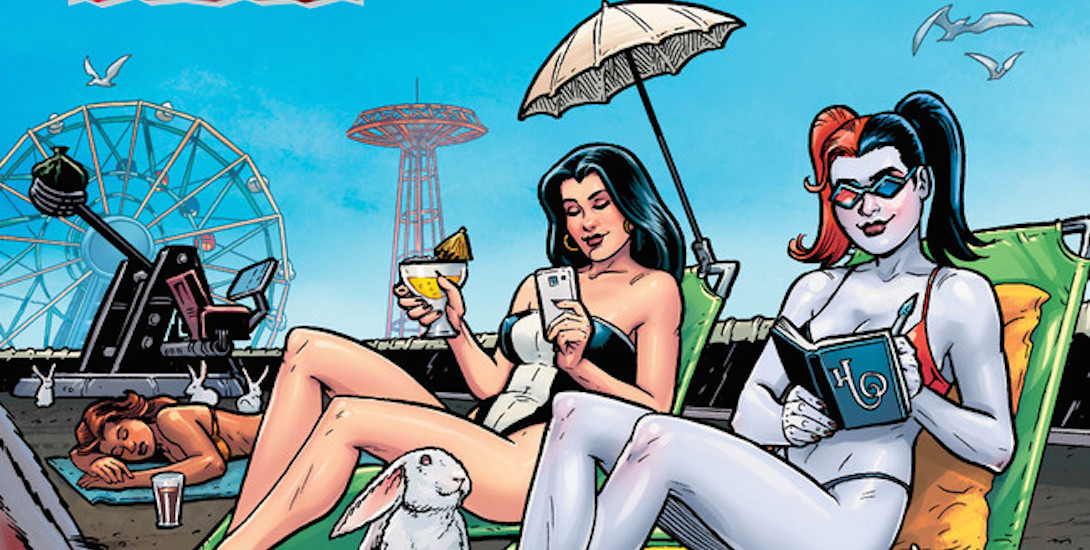 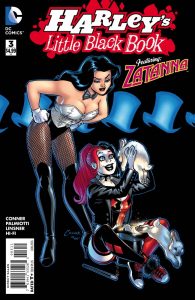 The fact that there’s a book featuring Harley Quinn on shelves every week this month puts a Joker-sized grin on my face. When a character attains a high level of popularity, there is the risk of overexposure, but when the product is good it doesn’t really matter. Right now, we’re at the point where we enjoy the ride and hope this level of quality never ends.

This is now Harley’s world and we’re merely living in it.

Zatanna stops by to be the other half of this issue’s odd couple. She happens to have been booked for a gig at the very building Harley lives in and luckily so. One reason is that Amanda Conner and Jimmy Palmiotti can pair Harley with anyone, make feel natural, and play them off each other smoothly. The other is due to the fact that three ghosts have taken up residence in Harley’s home!

What ensues is a hellishly fun adventure. You will laugh as Harley shoots at specters and later tries to grope them. Their backstory is well concocted, further cementing the fact that this writing team can create any character and write amazing dialogue for it.

It was rather unexpected that we would see Harley join Zatanna in venturing to a spiritual dimension to seek an audience with a demon, but it somehow just worked. How Conner and Palmiotti make such a grandiose concept make sense and work within the confines established by the Harley Quinn family of titles is beyond me. I would kind of liken it to how a serious show like Supernatural manages to incorporate comedy and meta-textual themes without straying from what makes it what it is.

As for the artwork, Joseph Michael Linsner offers up some great eye candy. Hi-Fi’s colors help it maintain a sense of continuity with the other books. As someone who reads them all, I never once pick up this, or any of the other titles, and think to myself, “This contradicts that or doesn’t belong.”

The higher page count and amount of dialogue make for a dense, lengthy read, but you won’t care. Just pretend you have a new graphic novel in your hands and immerse yourself. The water is warm and Harley says it’s okay to come in.

By the way, she wears a Ghostbuster costume. That alone is worth the price of admission.